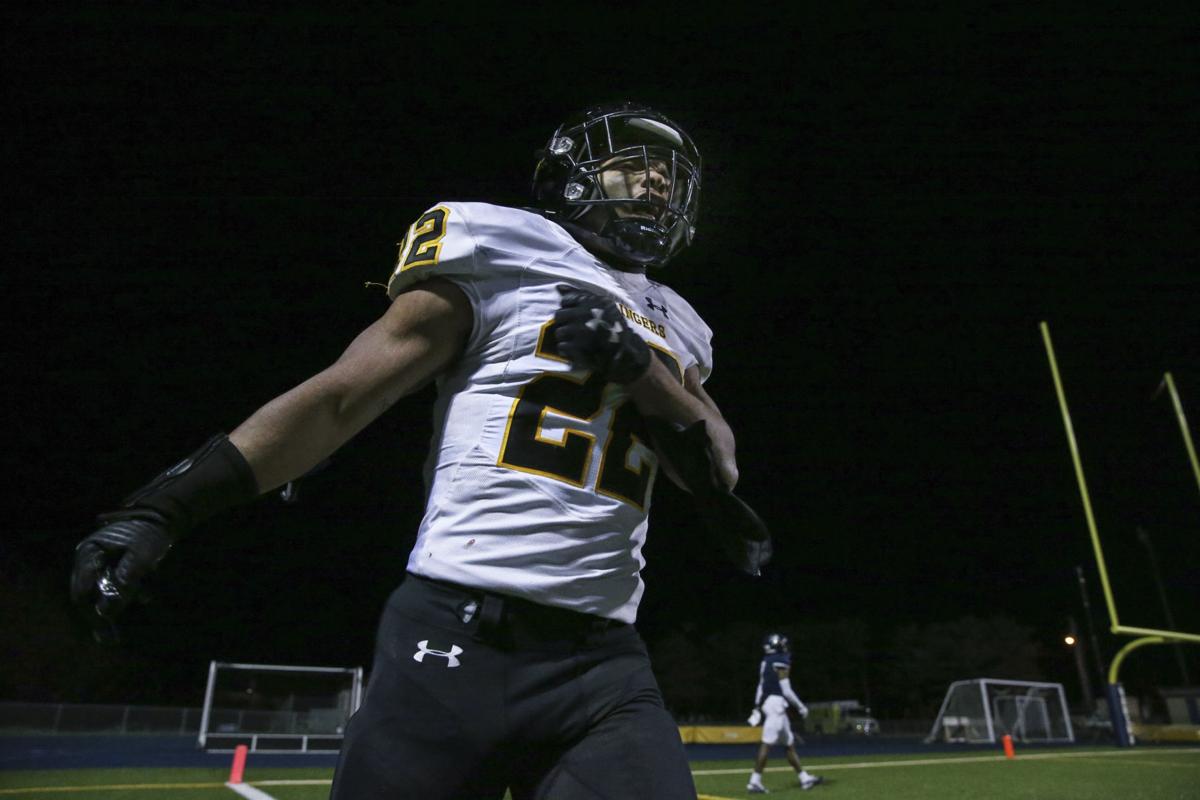 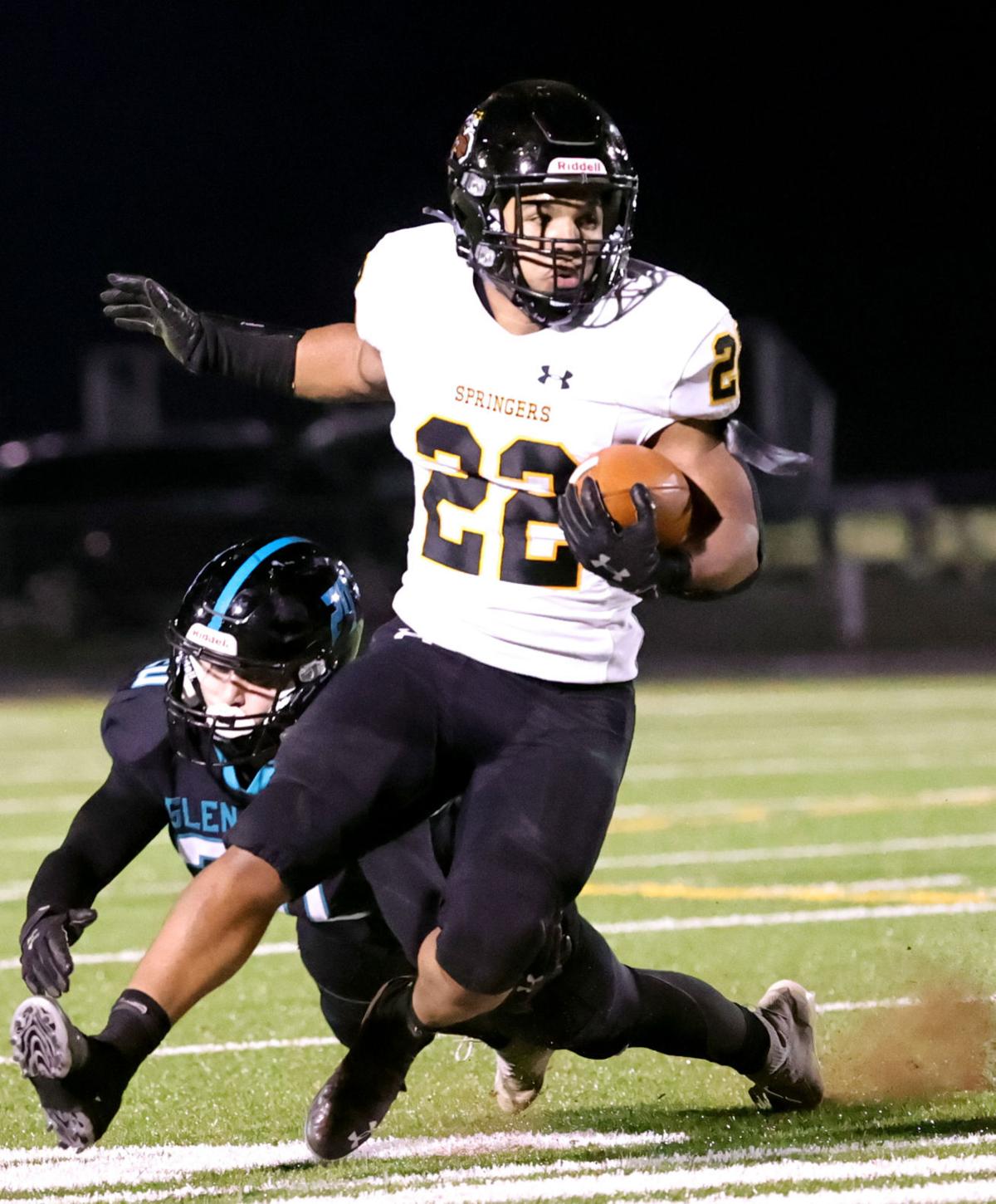 “It’s a great experience not only to get an opportunity to coach the team your kids play for, but to be successful ... that’s priceless,” said Springers assistant coach Robbie Jackson, whose sons Jordan (right) and Payton are on the team. 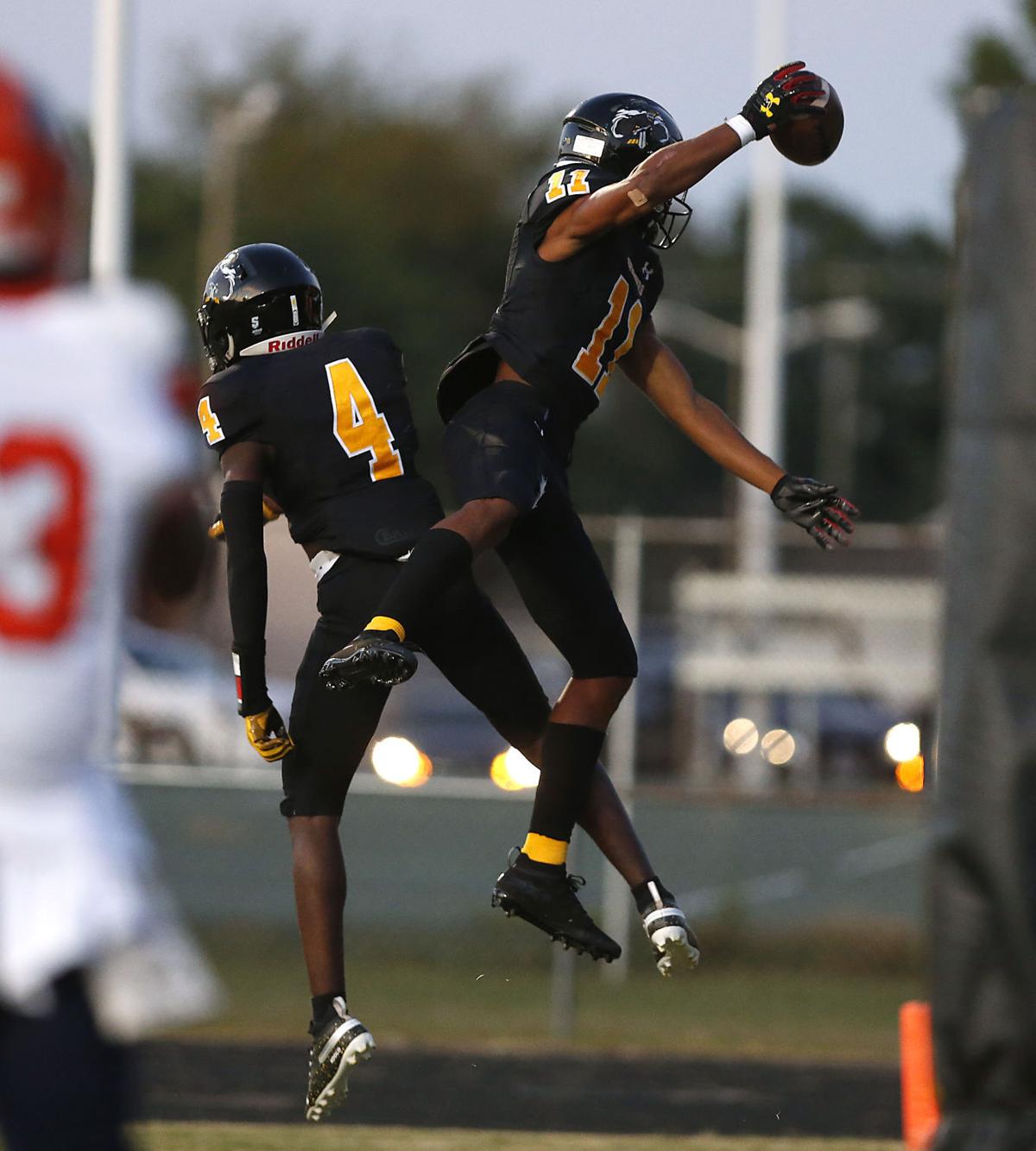 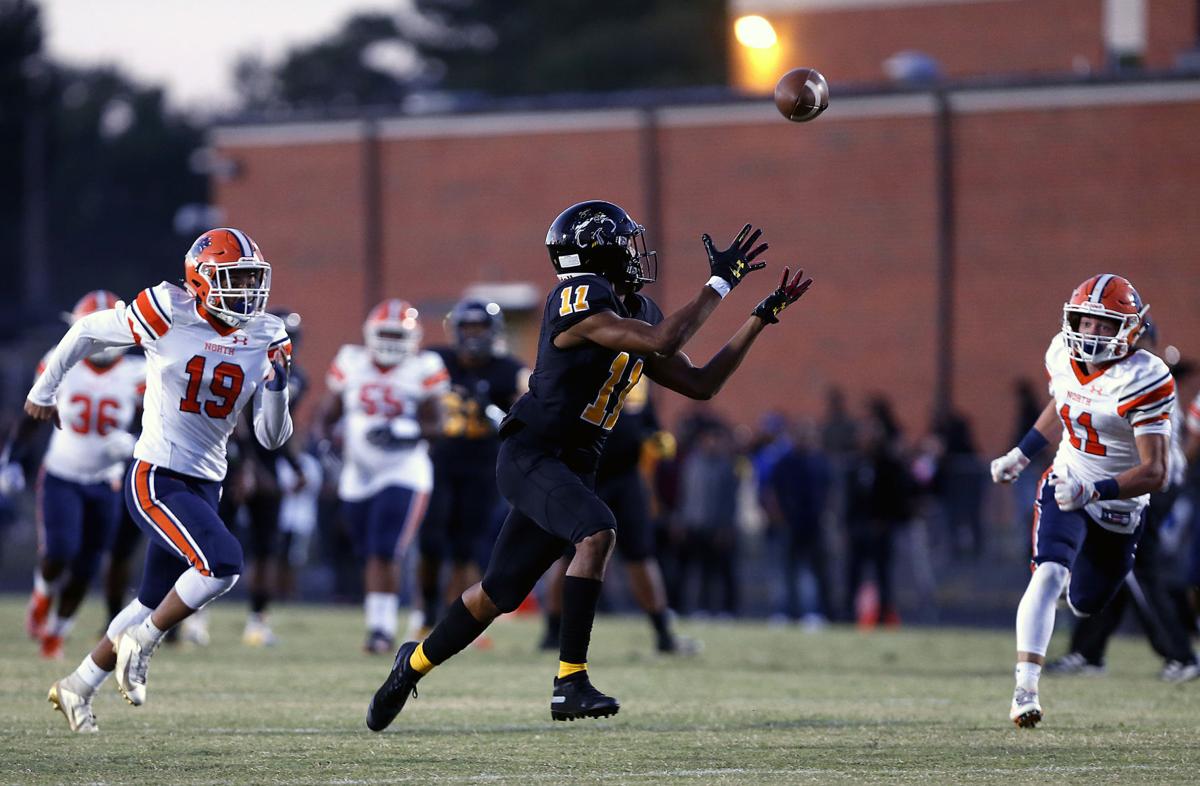 Highland Springs’ LaQuan Veney (11) prepares to pull in a reception for a touchdown against North Stafford at Highland Springs in Henrico VA Fri. Sept 20, 2019. 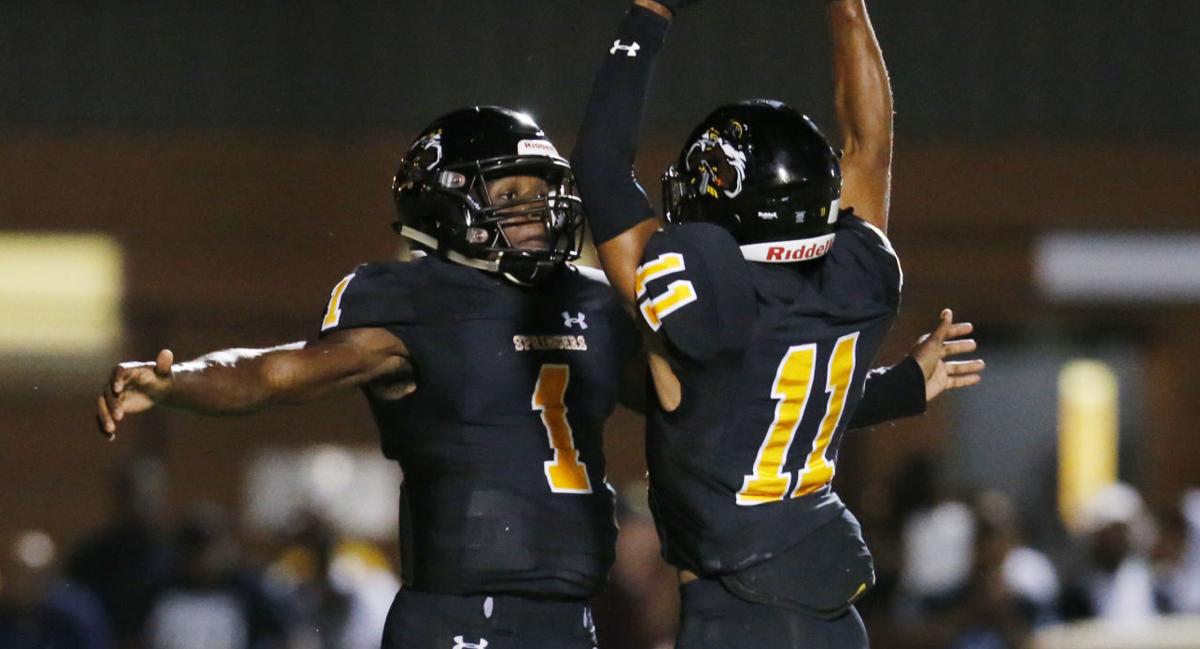 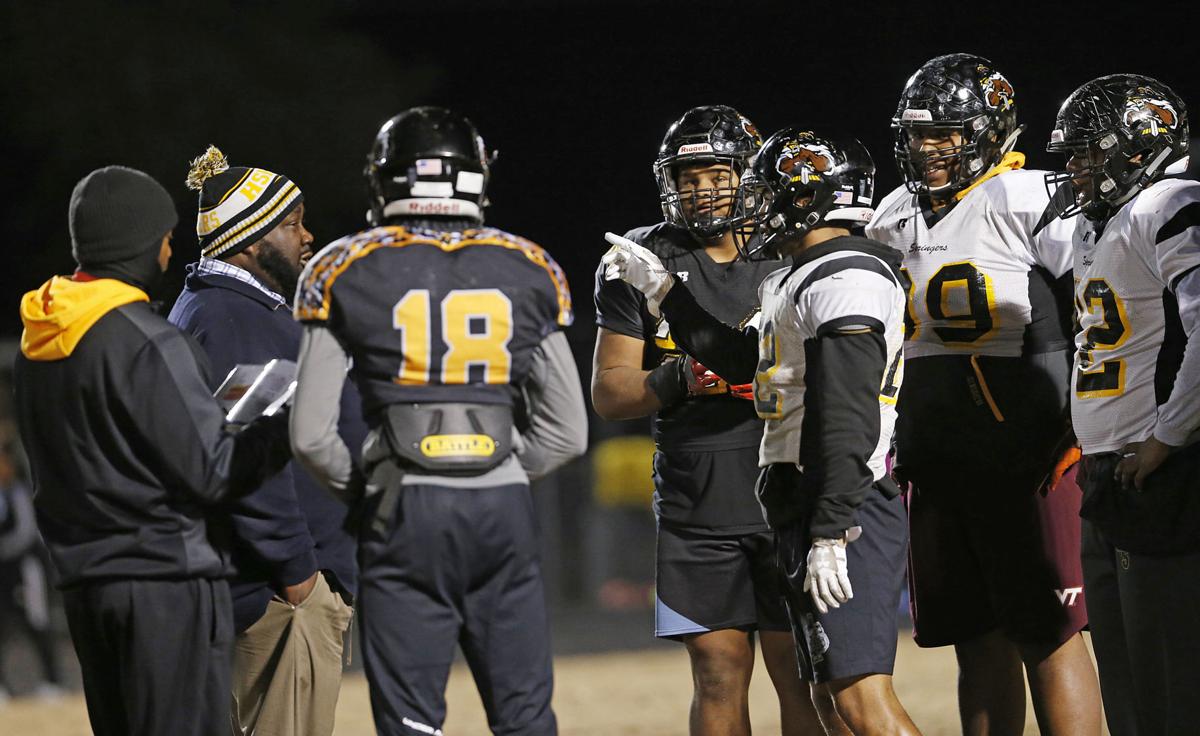 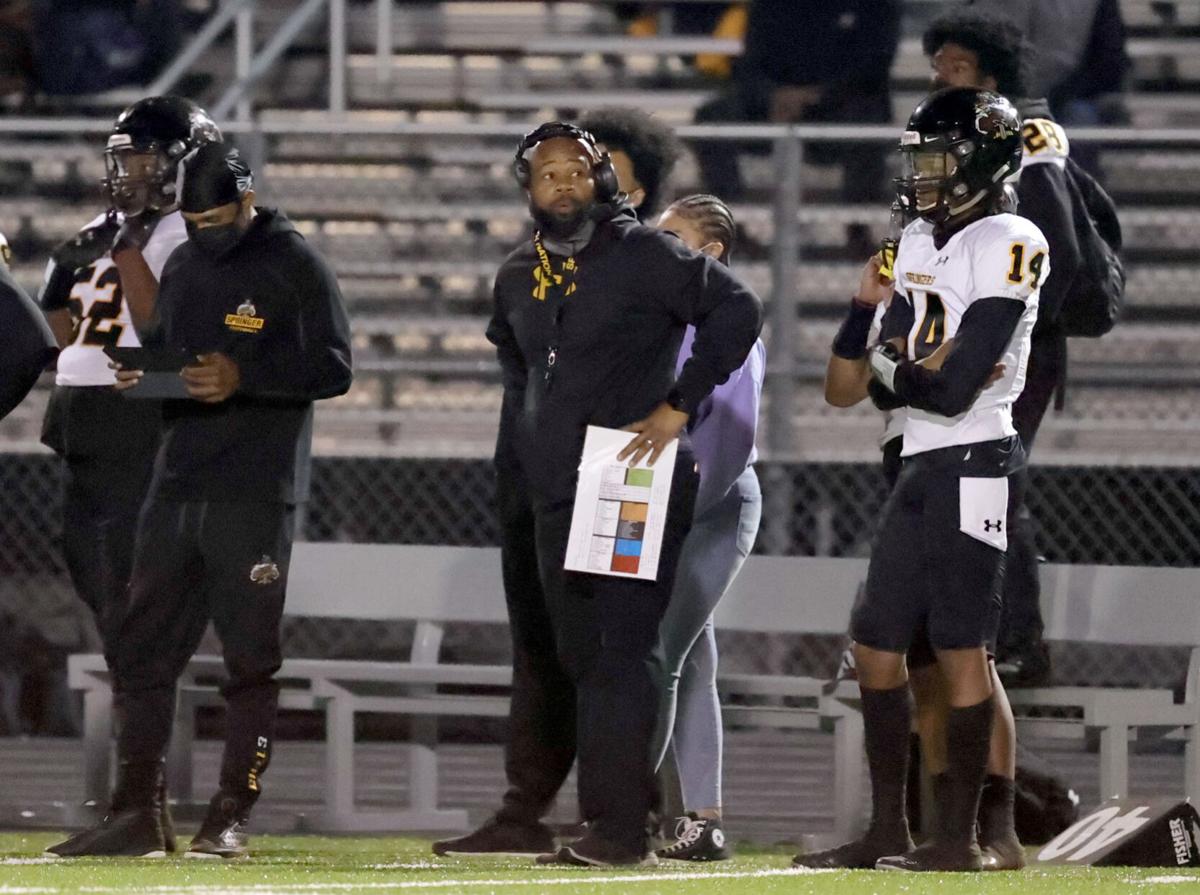 When Highland Springs running backs and strength coach Robbie Jackson first spoke with head coach Loren Johnson about joining his staff, the first thing Johnson impressed upon him was “It’s not about football.”

“Football will take care of itself,” said Jackson, who has two sons — Jordan, a senior running back, and Payton, a senior defensive lineman — on the team.

“It’s about everything else, life lessons, pouring that into the young men to help them enter adulthood with the right teaching and the right focus, which is what I believe in and my values as well. So it just fit where I wanted my boys to be for the next four years.”

The Jacksons are among the many examples of family roots defining the Highland Springs program. The Springers (7-0) on Saturday will seek their fifth state title berth in the past six seasons when they meet defending Class 5 champion Maury (6-1) in Norfolk in the state semifinals.

Those family connections have been a strong common thread driving the program’s sustained success, and helping it maintain a culture synonymous with the community.

“It’s all in the family at our place,” Johnson said with a chuckle, before reeling off a long list of families who’ve held prominent places in the Springers community.

Former Virginia Tech and NFL defensive back Macho Harris played at Highland Springs before Johnson took over. But Harris’ brother, Orlando, played quarterback under Johnson, and the coach said family connections under his staff go back to the Harris brothers.

Assistant coach Derrick Hopkins played for Highland Springs and at Virginia Tech with his brother, Antoine. Another former Tech player, Noland Burchette, played for the Springers in the early 2000s before his brother, Jaquan, played under Johnson.

Current Springers defensive end Miles Greene is coming through the ranks following brothers Malcolm, now a cornerback at Clemson, and Mike, a D-lineman at James Madison.

Johnson’s own sons are in the eighth and 10th grade, and they’ll both play for him soon.

Currently, in addition to the Jacksons, quarterback Juwan Dent’s father Kevin is the offensive line coach. Defensive end Kelvin Gilliam’s older brother played in the 2000s. And receiver Quanye Veney carries on the legacy of older brother Laquan, a 2020 grad.

Johnson said the constant connections have contributed to the continuity and stability of his program.

Quanye wears Laquan’s old No. 11. The two still text or call every day, and Laquan offers advice on everything from route running to competitive mindset.

“Family tradition, whatever he started I have to finish,” Quanye said of the brothers’ relationship. “From little kids growing up, that’s always been my role model. He’s always who I wanted to be like.”

Payton and Jordan Jackson call their father “coach” at home sometimes. They try and separate football from family dynamics. And although that can be a challenge, they’ve cherished the time spent competing together.

“It’s a great experience not only to get an opportunity to coach the team your kids play for, but to be successful, to win state championships with them, that’s priceless,” coach Jackson said.

Payton and Jordan always envisioned themselves as Highland Springs players when they were little. They played in the Glen Lea Youth Football Association, as did the Veneys and many of the current team. The younger Veney said those early days playing together built chemistry that has carried on into high school.

Payton picks his father’s brain just as Quanye does his brother’s. That’s his favorite part about playing for his dad.

“He’s always available, so I can ask him about anything,” Payton said. “You share the game with each other.”

Jordan added that it can be a tad nerve-racking, because football inescapably spills over into family life.

“He can be picky. I’ll do something wrong at practice and we get home and he’s still bothering me about it,” Jordan said with a laugh. “But at the end of the day it’s good to have him as my coach.”

The elder Jackson said that separation between football and family has gotten easier as his boys have matured. But at the same time, football has become synonymous with family.

“It exudes that, it’s a big family atmosphere. Coaches are babysitting other coaches’ kids, the wives and moms are hanging out,” coach Jackson said.

“It’s a great overall atmosphere and it is great for our group of kids to see what great family structures look like. All of that again pours into what they’re learning from the game of football, and it goes back to what coach Johnson mentioned when I first met with him, that football takes care of itself.”

“It’s a great experience not only to get an opportunity to coach the team your kids play for, but to be successful ... that’s priceless,” said Springers assistant coach Robbie Jackson, whose sons Jordan (right) and Payton are on the team.

Highland Springs’ LaQuan Veney (11) prepares to pull in a reception for a touchdown against North Stafford at Highland Springs in Henrico VA Fri. Sept 20, 2019.