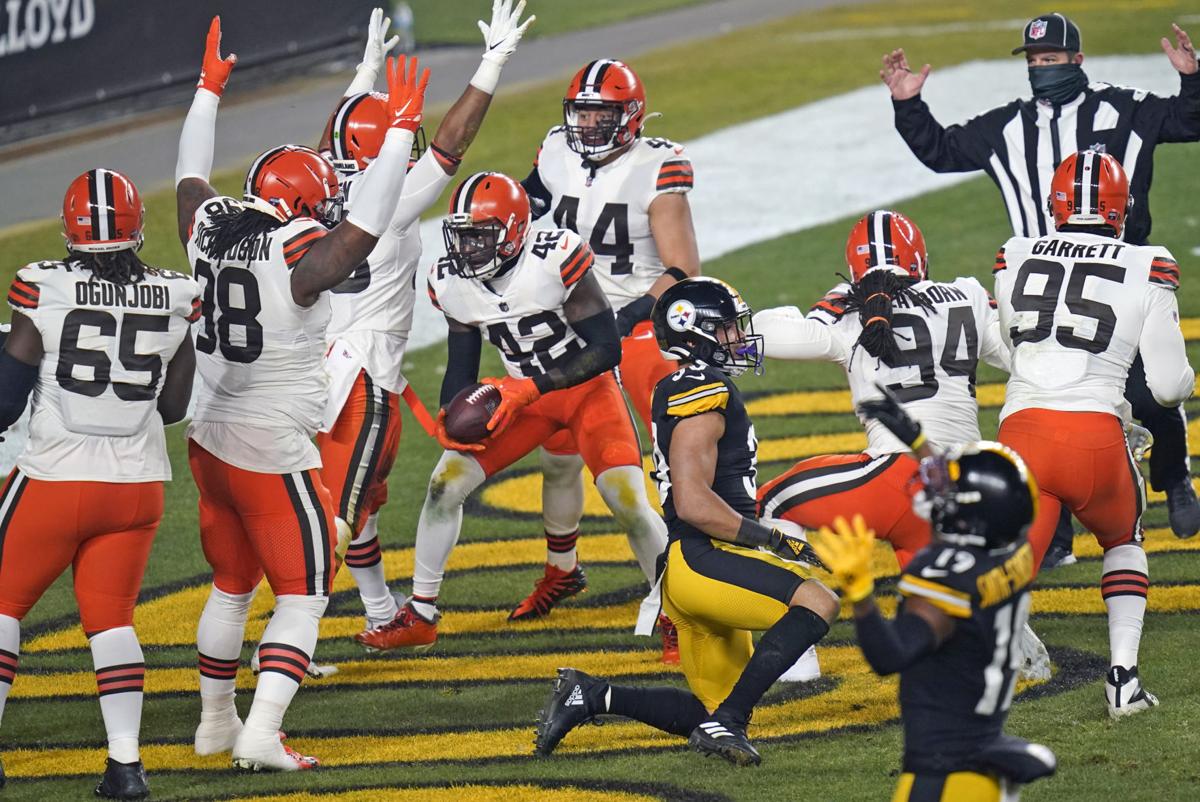 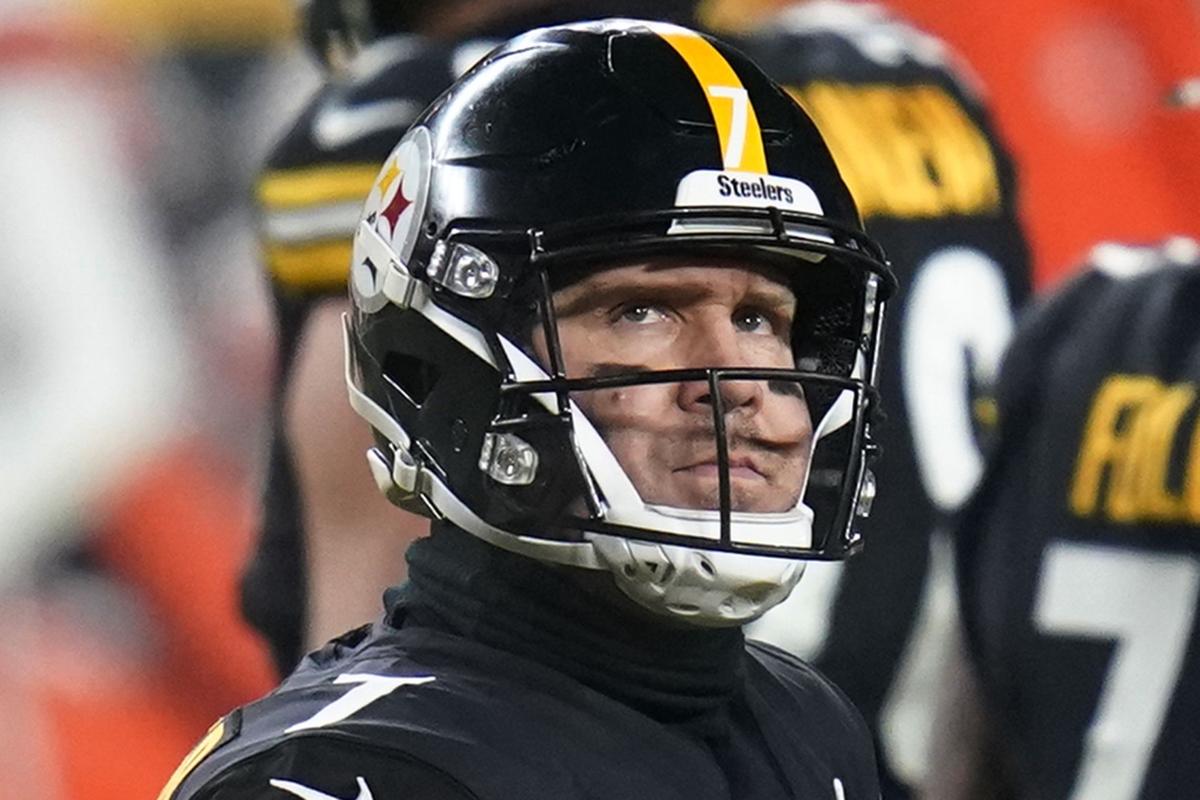 Pittsburgh Steelers quarterback Ben Roethlisberger (7) looks a the scoreboard as he walks off the field during the first half of an NFL wild-card playoff football game against the Cleveland Browns, Sunday, Jan. 10, 2021, in Pittsburgh. (AP Photo/Keith Srakocic) 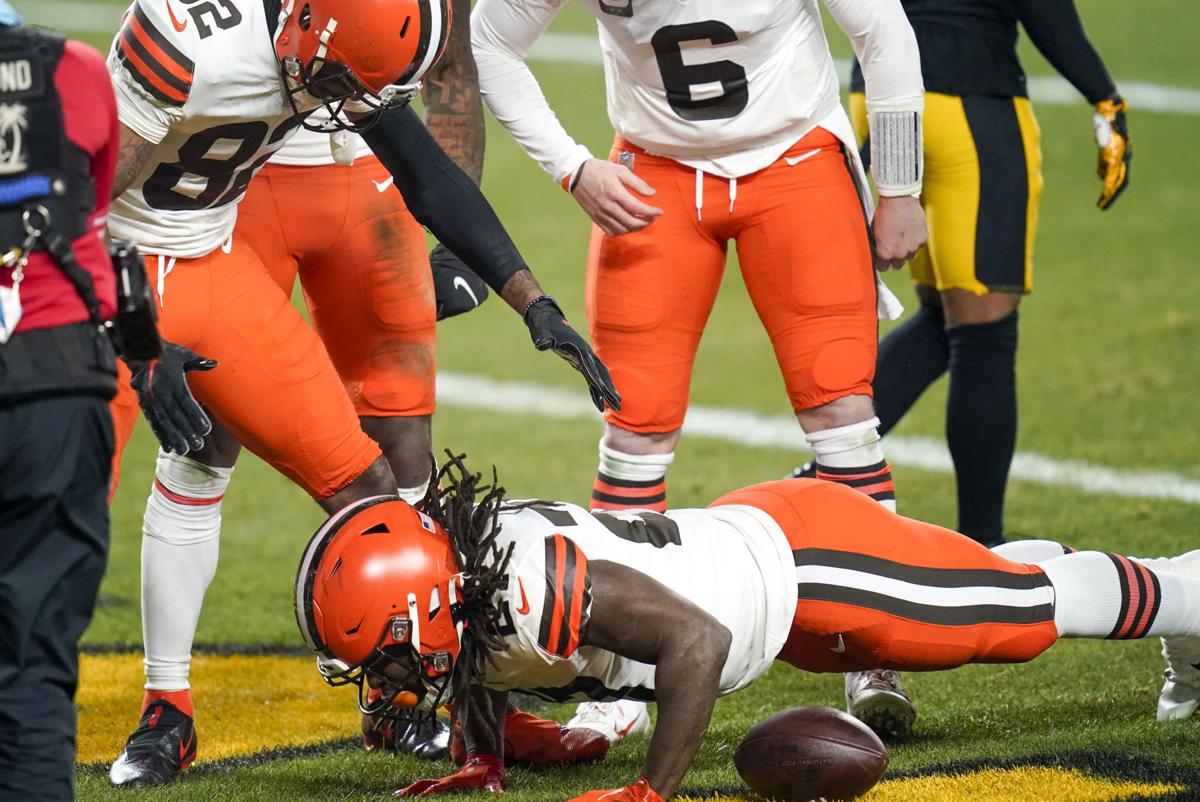 Cleveland Browns running back Kareem Hunt (27) does push ups after scoring on an 11-yard run during the first half of an NFL wild-card playoff football game against the Pittsburgh Steelers, Sunday, Jan. 10, 2021, in Pittsburgh. (AP Photo/Keith Srakocic) 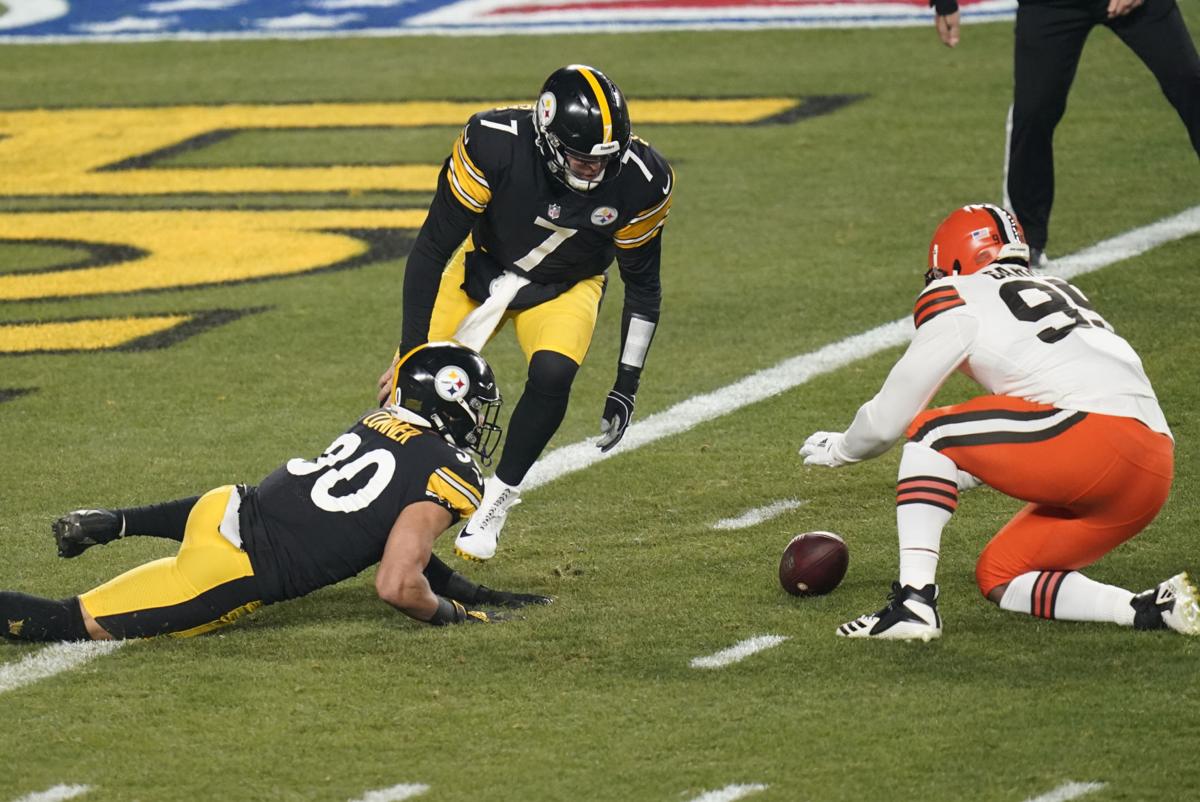 PITTSBURGH — So much for the weight of history. Or practicing. Or having your head coach on the sideline. Or an emotional leader on the field.

The Cleveland Browns overcame all of it. The burden of carrying the mantle of a franchise that’s long been a punchline. A schedule ravaged by a COVID-19 outbreak. A rival that for years has treated them like a harmless little brother.

All of that’s over. And maybe for good.

The Browns dismantled the Pittsburgh Steelers 48-37 in an AFC first-round game Sunday night, picking up the franchise’s first postseason victory in more than a quarter-century and earning a trip to Kansas City next Sunday to face the defending Super Bowl champions.

“We believe in the people in the room no matter what’s going on,” quarterback Baker Mayfield said. “We knew that everybody was counting us out. There was no extra pressure or anything. No one believed in us besides us.”

Playing with first-year head coach Kevin Stefanski, Pro Bowl guard Joel Bitonio and top cornerback Denzel Ward back in Cleveland after all tested positive for COVID-19, Cleveland (12-5) raced to the biggest first half by a road team in NFL playoff history then held on.

Mayfield threw for 263 yards and three touchdowns, including a screen pass that Nick Chubb turned into a 40-yard score that halted Pittsburgh’s momentum after the Steelers cut the deficit to 12. Kareem Hunt added 48 yards and two TDs on the ground while Cleveland’s defense forced five turnovers to hand the Steelers (12-5) a staggering loss.

The victory was the Browns’ first postseason triumph of any kind since beating New England on New Year’s Day 1995 — three months before Mayfield was born — and their first playoff win on the road since Dec. 28, 1969.

The significance wasn’t lost on special teams coordinator Mike Priefer, a Cleveland native who found himself filling in when Stefanski tested positive for COVID-19.

“I grew up [a Browns fan], so I know what this means,” Priefer said.

Cleveland did it despite practicing just once over the last two weeks and having lost 17 straight at Heinz Field. The Browns did it with efficiency and swagger. And they did it with Priefer at the controls and offensive coordinator Alex Van Pelt taking over the play-calling duties as Stefanski watched in his basement back in Ohio.

“We have a resilient team,” Mayfield said. “Defense played great in the first half and we kind of stalled out and let them climb back in the game.”

The Steelers ended a season in which they started 11-0 with a thud that could reverberate for years. Ben Roethlisberger ended his comeback season by throwing for 501 yards on an NFL-record 47 completions with four touchdowns and four interceptions.

“I don’t have any magical answers,” Roethlisberger said. “We just didn’t put it together.”

The Steelers led the NFL in sacks but failed to get to Mayfield. Cleveland’s 48 points were the most Pittsburgh has given up in the playoffs, surpassing the 45 to Jacksonville in the 2017 playoffs.

Pittsburgh’s problems started on the first play from scrimmage when center Maurkice Pouncey’s snap sailed by Roethlisberger into the end zone. Cleveland’s Karl Joseph fell on it for a touchdown. Roethlisberger threw three first-half interceptions, two of which led directly to Browns scores.

When the Browns arrived back in Cleveland at around 3 a.m. Monday, their plane was welcomed at the airport by barking, chanting fans.

“We have to keep it going,” said Stefanski, who anticipates returning to the team’s facility on Thursday.

Two NFL teams looking for brighter days ahead have landed on the coaches they hope can get them there.

Urban Meyer agrees to return to coaching with Jaguars

Doug Pederson out as Eagles coach

PHILADELPHIA — The Philadelphia Eagles on Monday fired coach Doug Pederson, less than three years after he led them to the franchise’s only Su…

CLEVELAND — Kevin Stefanski is still stuck in his basement at home. At least the Browns are out and about.

PHILADELPHIA — It took less than 48 hours for an Eagles player to publicly question the team’s approach to its season finale.

No NFL team scored more points during the regular season than the Green Bay Packers. Nobody has played better defense than the Los Angeles Rams.

Pittsburgh Steelers quarterback Ben Roethlisberger (7) looks a the scoreboard as he walks off the field during the first half of an NFL wild-card playoff football game against the Cleveland Browns, Sunday, Jan. 10, 2021, in Pittsburgh. (AP Photo/Keith Srakocic)

Cleveland Browns running back Kareem Hunt (27) does push ups after scoring on an 11-yard run during the first half of an NFL wild-card playoff football game against the Pittsburgh Steelers, Sunday, Jan. 10, 2021, in Pittsburgh. (AP Photo/Keith Srakocic)