'We run the state': Highland Springs beats Maury 13-0 in Class 5 semifinal behind dominant defensive showing
0 comments
Share this
1 of 2 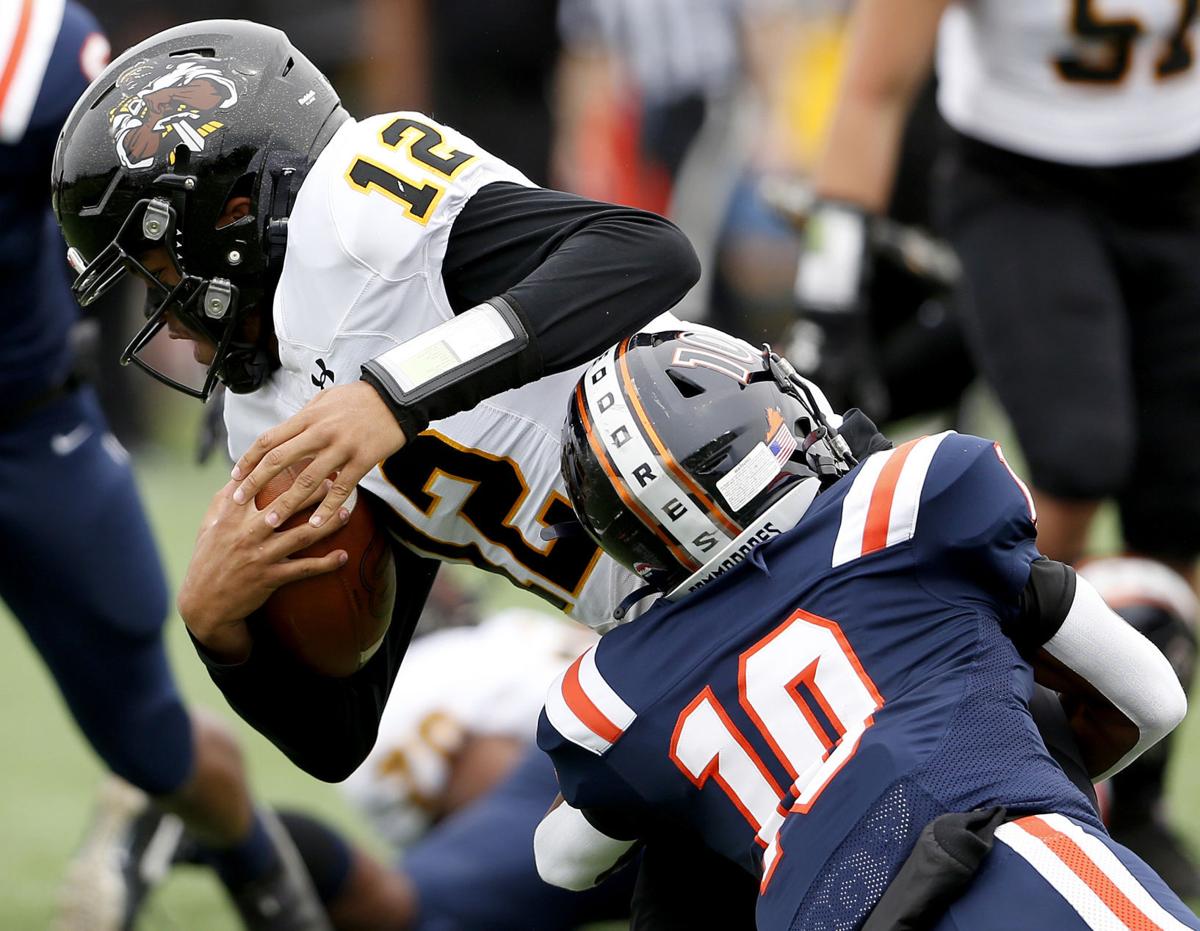 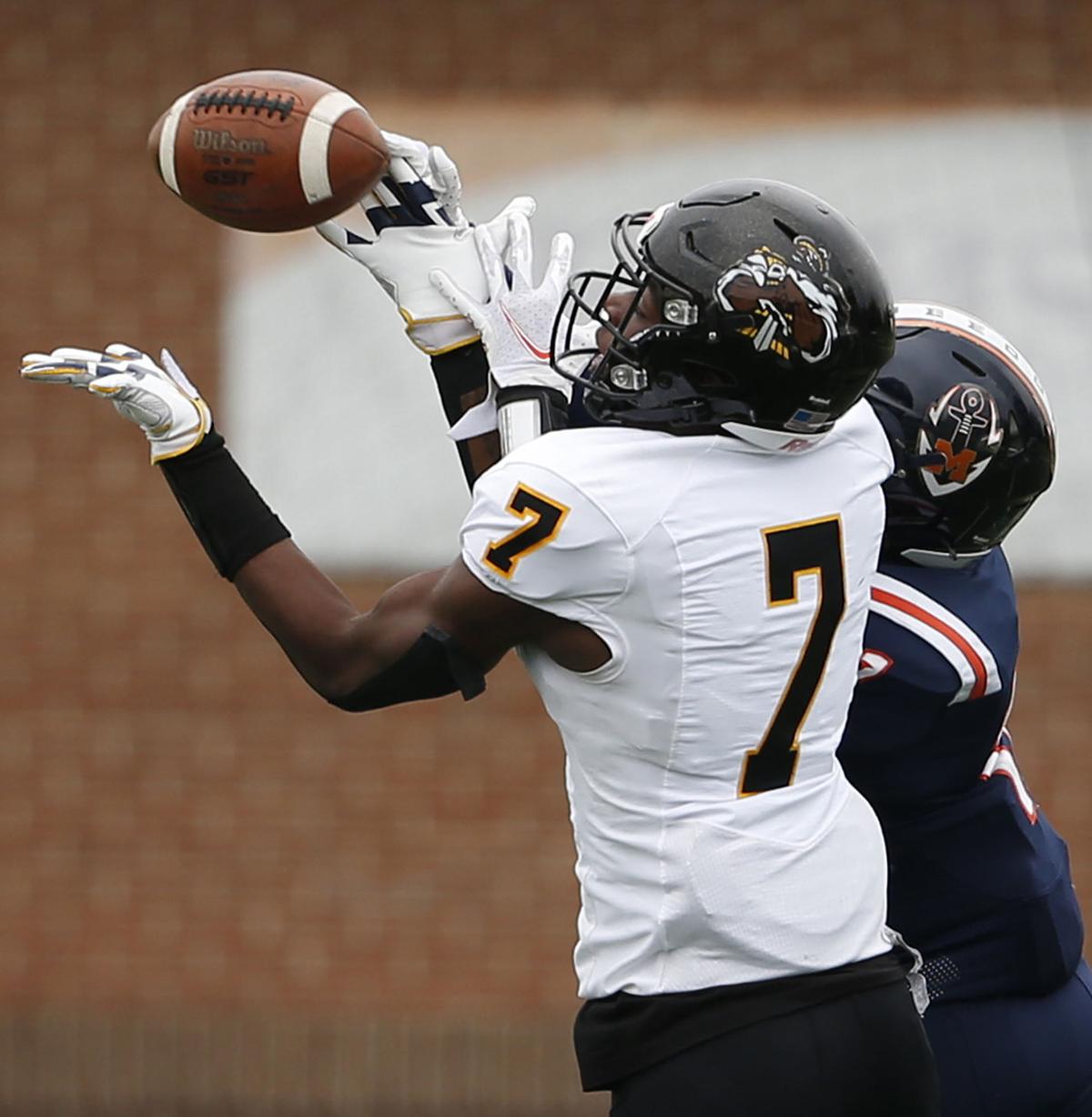 Highland Springs’ Latrell Sutton hauls in a deep pass for a TD during Saturday’s Class 5 semifinal against Maury at Powhatan Field in Norfolk. Sutton was the target for both of the Springers’ scores in their 13-0 triumph.

Harmon told reporters at the beginning of the season that his Springers wouldn’t lose a game this year. That prophetic statement continued to hold true Saturday, as Highland Springs (8-0) stymied defending Class 5 champion Maury in Norfolk behind a dominant defensive showing to win 13-0 and move on to host the state championship next weekend.

“We’re supposed to do that,” Harmon said of returning to the state final for a program that’s won four of the past five Class 5 championships but fell short in 2019.

“We’ve got one more game to go, we’re gonna show ‘em what we’re about, we don’t lose to the 757, that’s what we do, we come out and win. We run the state, we do it big, next week again and hold me to it,” Harmon said before running off to celebrate with his teammates.

“That’s a statement, no further questions,” he yelled back to reporters.

Cornerback Daquan Giles had a key interception that halted a promising Maury drive in the first half. Defensive backs Jamareeh Jones and Jabari Parker patrolled the back end to perfection. The Commodores didn’t generate a completion of more than 20 yards.

Springers coach Loren Johnson said defensive coordinator Devon Simmons is one of the best around on that side of the ball, and praised his staff as a whole.

“The defensive coaching staff is really, really good, they just do a great job of preparing, putting kids in position, protecting the kids, loving on the kids,” Johnson said before listing names of much of his staff.

“Everybody, they do a great job, get the kids prepared each and every week and that’s why you see games like this.”

The Maury defense, stout in its own right, might have matched Highland Springs were it not for two plays.

Springers’ 6-foot-3, 200-pound receiver Latrell Sutton proved a matchup nightmare for the Commodores on the outside, he scored on a 55-yard pass over the middle from quarterback Juwan Dent just before the half to break a scoreless deadlock and make it 6-0.

Receiver Quanye Veney (five catches, 33 yards) set Highland Springs up in Maury territory with a key 68-yard kickoff return to start the second half. Veney took a hard hit in the middle of the field at his own 20, but bounced off a would-be tackler to find a hole and break to the outside before scampering all the way to the Commodores 27.

Three plays later, Dent found Sutton again, this time in the corner of the end zone for a lofted 31-yard touchdown to make it 13-0.

Johnson said Dent has improved immensely over the past couple seasons, and grown comfortable running the offense.

“Being the guy, he’s kind of blossomed into his own,” Johnson said. “Because of it, our offense didn’t play great today, but we played well enough to score two touchdowns and win the ballgame.”

Harmon, Gilliam, Pernell and their dominant Springers defense took care of the rest. Maury totaled 163 yards of offense. Highland Springs has allowed 31 total points this season (3.9 per game), and nearly half of those came in one game, a 21-15 win over Deep Run.

Johnson said, in light of everything his team has endured to play through the pandemic, he was thrilled for his kids to return to the state title game.

But he added his Springers need to clean up “a lot of little things” if they’re going to hoist a fifth state championship trophy in six seasons next Saturday.

“I never want to get familiar with this feeling,” Johnson said when asked how a year away changes his perspective on reaching the title game again.

“I always want it to be something special. Each and every time, I want it to be unique, and this one is more unique than any other. Because of not playing Manchester, because of COVID ... all of those things matter and for us in this situation. We’ve got a little work to do, and we’re going to get it done.”

The Springers, whose home field is under construction, will host the state championship Saturday at Varina High School against Stone Bridge (8-0), who they defeated in the 2015, 2016 and 2017 title games.

Highland Springs’ Latrell Sutton hauls in a deep pass for a TD during Saturday’s Class 5 semifinal against Maury at Powhatan Field in Norfolk. Sutton was the target for both of the Springers’ scores in their 13-0 triumph.