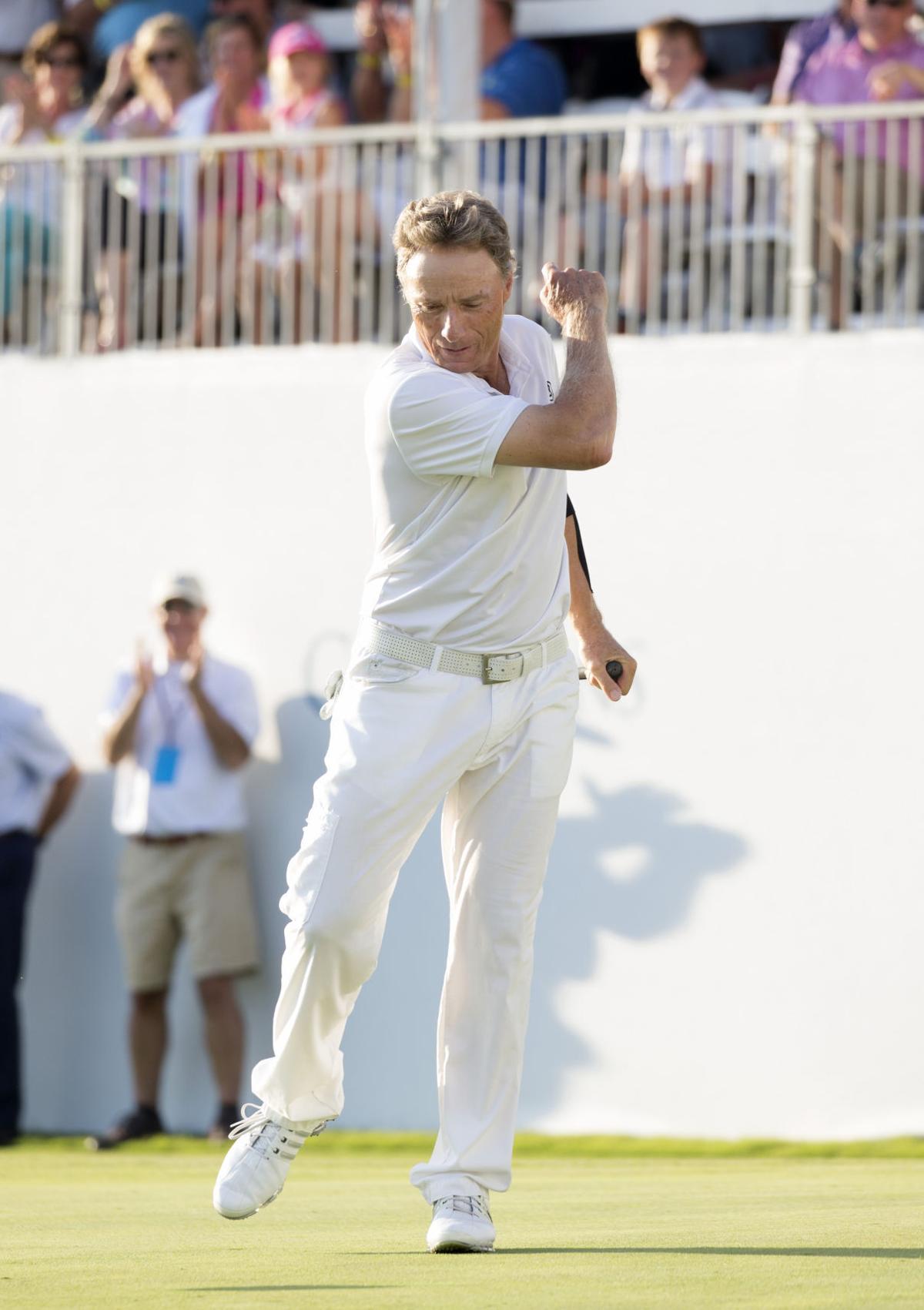 Bernhard Langer celebrated his tournament-winning eagle on the 18th hole in the Dominion Energy Charity Classic at The Country Club of Virginia in 2017. Langer will be part of this year’s field. 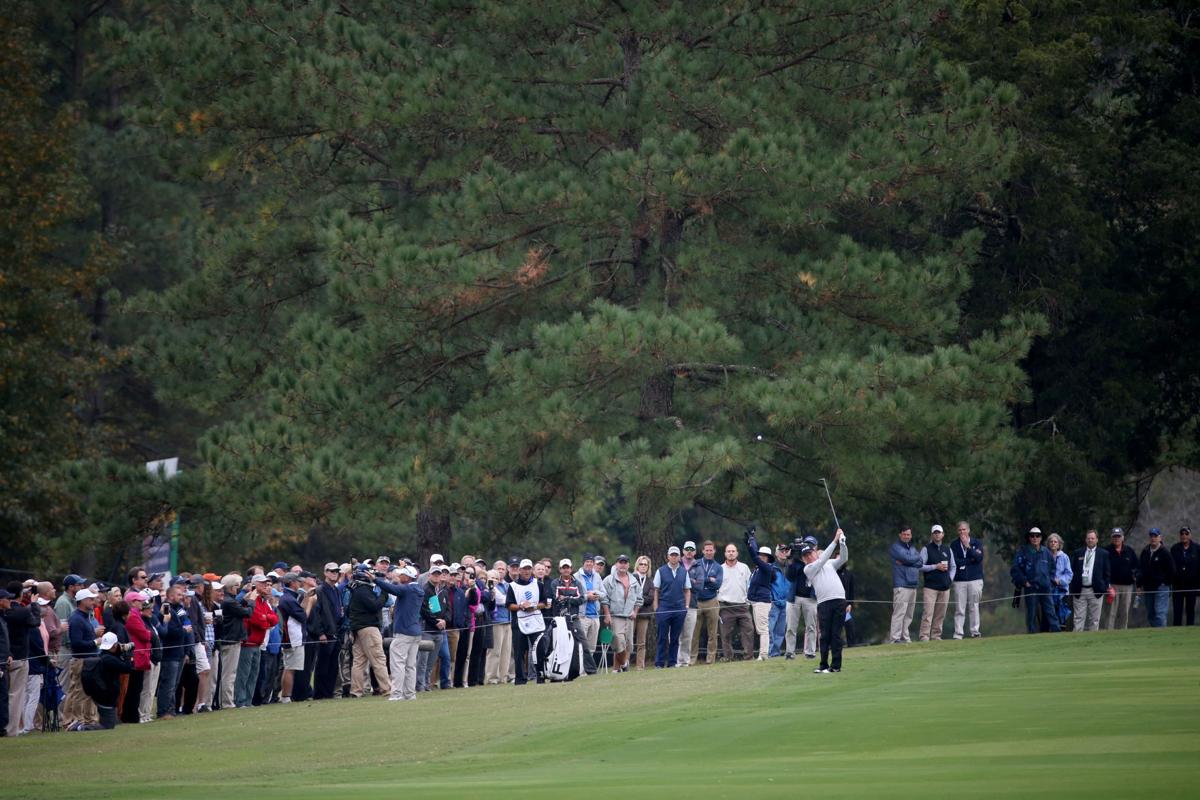 Gallery looks on Miguel Angel Jiménez of Spain during the final round of the Dominion Energy Charity Classic golf tournament at Country Club of Virginia on Monday, October 21, 2019.

When PGA Tour Champions heavyweight Bernhard Langer walked off with an eagle putt on the 18th hole to win the Dominion Energy Charity Classic by one stroke three years ago, a sea of onlookers at the Country Club of Virginia erupted in awe and applause.

If similar theatrics unfold at this year’s DECC, they’ll happen amid relative silence.

But what the tournament will lose with the absence of spectators, it may make up in part with its entry list.

It was announced in July that, out of an abundance of caution, there will be no fans at the fifth iteration of the DECC to be played Oct. 16-18 on CCV’s James River Course.

However, due to alterations to the PGA Tour Champions schedule precipitated by the COVID-19 pandemic, this year’s field will be larger than usual and include some players who typically may not have been eligible to compete.

“I think the way the field’s coming together this year, with just so many great names — I think even more so than in the past — I do think that it kind of changes things and makes for very compelling golf. And a very compelling competition,” said Steve Schoenfeld, executive director of the DECC.

The DECC, in its first four years, was one of three events in the PGA Tour Champions’ Charles Schwab Cup playoffs. It’s been the first of the three the past three years, and thus has consisted of the top 72 players in the Charles Schwab Cup points standings.

This year, though — because several tour events were canceled — the 2020 schedule was combined with the 2021 schedule. That means no Charles Schwab Cup playoffs this calendar year.

So the DECC, like other events on the circuit, will be open to a field of 81 this year. And instead of being based on points, players could qualify by a dozen means, from PGA Tour career points to current-year tournament winners to sponsor exemptions.

The change will allow players such as Richmond native and longtime former PGA Tour pro Bobby Wadkins to compete, as well as Peter Jacobsen, a golf analyst and seven-time winner on the PGA Tour, who also has a pair of PGA Tour Champions major titles to his name.

“To qualify in the past, you’ve had to play a pretty sizable schedule to amass enough points to make it to our event,” Schoenfeld said.

PGA Tour Champions brought fans back for a recent event, the Sanford International, Sept. 11-13 in Sioux Falls, S.D. But other tour events still haven’t had spectators. The DECC, like other events, will be broadcast on the Golf Channel.

Many of those who will be on site at CCV will be tested for the coronavirus, more than 600 total. The tests will be executed at a mobile unit not far from CCV.

In three of the four years it’s been held, the DECC has been voted as the schedule’s best event by the players on tour. The crowds have contributed to that, but Schoenfeld believes the tournament will be able to provide most of the other aspects of the annual experience that have appealed to the players.

“The combination of us taking care of them, and supportive sponsors and volunteers that they see out here that are dedicated to helping with the event, to big crowds, are the things that they love,” Schoenfeld said.

During its lifespan, the DECC has helped raise more than $3.5 million for area charities. The event raised $1.76 million last year alone, almost matching the total raised in the first three years.

With no fans, such a figure would be unlikely this year.

But it’ll look and sound different, and the DECC team is happy to have a 2020 tournament at all.

“Because we still do anticipate making a sizable positive impact on the charity side and the charitable contributions that come from the tournament each year,” Schoenfeld said. “And I think that’s what keeps ... driving all of us to come to work every day and make sure we put on the best tournament that we can.”

Bernhard Langer celebrated his tournament-winning eagle on the 18th hole in the Dominion Energy Charity Classic at The Country Club of Virginia in 2017. Langer will be part of this year’s field.

Gallery looks on Miguel Angel Jiménez of Spain during the final round of the Dominion Energy Charity Classic golf tournament at Country Club of Virginia on Monday, October 21, 2019.