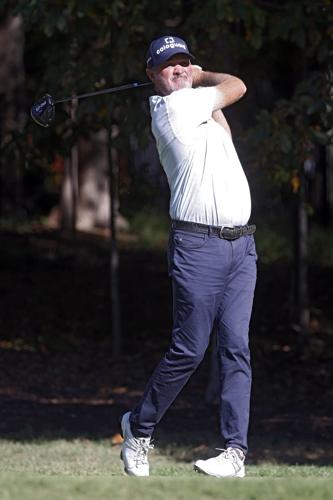 Jerry Kelly played bogey free and made seven birdies on the first day of The Dominion Energy Charity Classic. 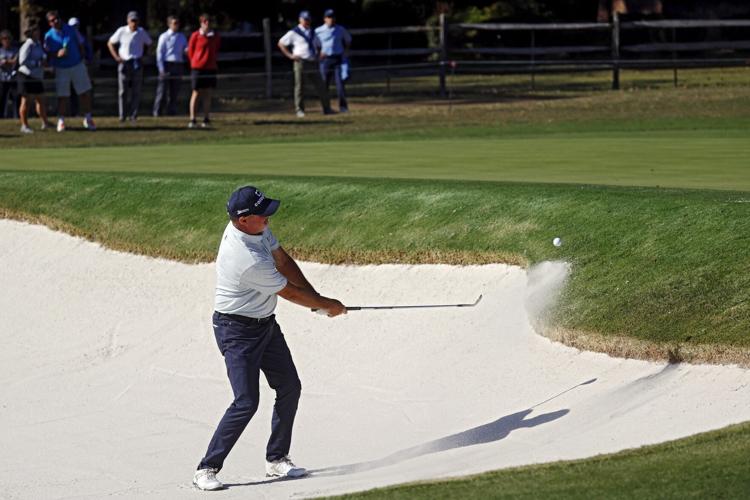 Jerry Kelly hit out of the sand on what he called a hard 10th hole amid the course’s toughest section during Friday’s DECC opening round. 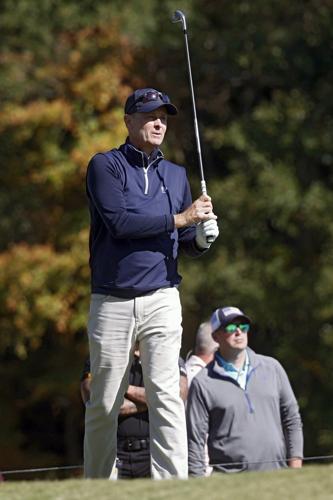 Bob Estes is one of four players at 5-under, two strokes off the lead after one round in the DECC.

Jerry Kelly (No. 4) and Miguel Angel Jimenez (No. 5) represent the upper tier of the PGA Tour Champions Schwab Cup rankings.

Yet, all four occupy positions high on the leaderboard after Friday’s opening round of the 54-hole Dominion Energy Charity Classic on the impeccably prepared Country Club of Virginia James River Course. The DECC is the first of the three tournaments that make up the Schwab Cup playoffs.

Kelly, playing in the final grouping, posted a 7-under-par 65 and holds a two-stroke lead over Jimenez, Day, Estes and Joe Durant (No. 40) all of whom returned 5-under 67.

Steven Alker (No. 1) headlines the eight-player group at 3-under 69.

Out of a tournament field of 68 players, 50 posted scores that were even or under par. Fifty-four advance to the TimberTech Championship in Boca Raton, Fla., in two weeks. Alker scored his first PGA Tour Champions tournament victory in last year’s TimberTech.

Kelly played bogey free and made seven birdies. He birdied four of the first five holes, added another to shoot 5-under on the front nine, played through the course’s toughest section in par and collected birdies on the 15th and 16th holes.

“Ten is a hard hole, 11’s a hard hole, 12’s a hard hole then 14’s a hard hole. It’s not like I’m playing bad because there’s a little lull in there. I was still playing well, just making pars on a couple of holes, and I had 3-irons in on two of them. I didn’t see it as much as a lull like I would sometimes. That was just the course being the golf course. Then I started getting the ones that you need to get,” said Kelly, who has three Tour victories this season.

“I love great starts, but that’s all they are. I’d love to be in the lead and have a great finish. That would be really cool. Yeah, as long as I can stay in position, it’s just trying to close it out on Sunday.”

Estes had five birdies, an eagle on No. 16 and a bogey. He is chasing his first PGA Champions Tour victory in his 82nd start. He withdrew from last week’s SAS Championship because of back spasms and spent the past week getting treatment.

“I wasn’t having any back issues at all (Friday). I didn’t have any spasms until I was on the last green (No. 9), and then I felt a little bit of a twinge or a spasm, but then it went away,” he said. “Hopefully no more back issues the next couple of days.

“I’m hoping to make it all the way to Phoenix (Tour Championship), but I’ve just got to take care of it one round, one tournament at a time.”

Durant bogeyed the third and fourth holes then reeled off eight birdies on the 11-hole stretch of holes 6 through 16. Day logged eight birdies against three bogeys.

Langer said he played well, “I just didn’t putt very good. I had a lot of chances to go deep and I shot 4-under, which is a good score, but I could have been seven or eight [under].”

The greens were slick and the cups were tucked in corners or located close to edges.

“Yeah, that’s what they do in most events, certainly playoff events. But the greens were receptive so you could go after pins most of the time. I just didn’t make anything today of any length,” Langer said.

Tiger Woods doesn't 'have much left in this leg' to compete

NASSAU, Bahamas (AP) — Tiger Woods painted an uncertain picture about how much golf he can play, saying Tuesday that “I don't have much left in this leg.”

Five players who have played at five World Cups

Jerry Kelly played bogey free and made seven birdies on the first day of The Dominion Energy Charity Classic.

Jerry Kelly hit out of the sand on what he called a hard 10th hole amid the course’s toughest section during Friday’s DECC opening round.

Bob Estes is one of four players at 5-under, two strokes off the lead after one round in the DECC.