Subscribe
Read Today's E-Edition
Share This
A power on Pittaway Drive: From Ferguson to Fat Rat, Trinity Episcopal still searching for its peak
0 Comments
Share this
Presented By 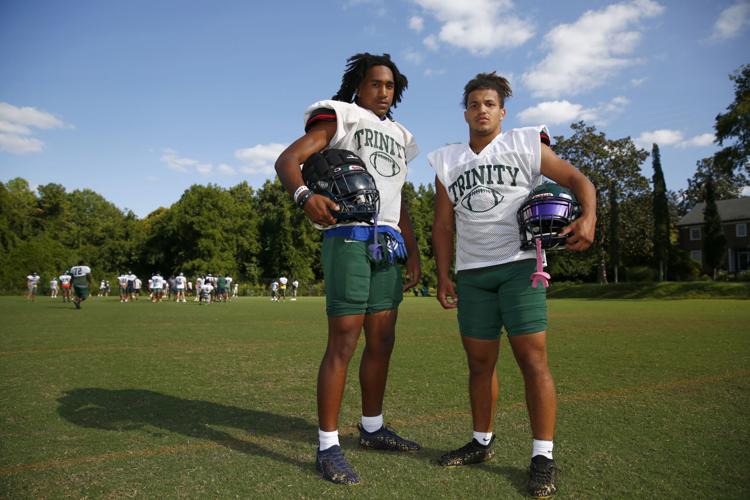 Trinity Episcopal receivers Davion Brown (left), a freshman standout, and senior Trai Ferguson, a Naval Academy recruit, have formed a strong bond since Brown joined the program. The duo has combined for nine touchdowns through three games this season. 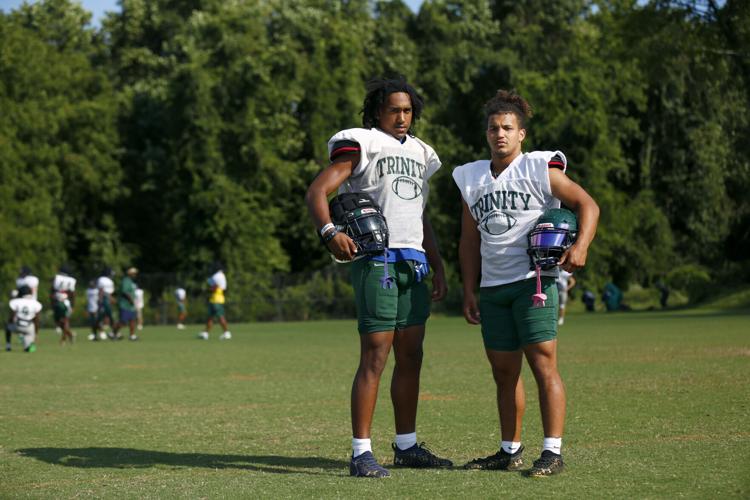 Trinity Episcopal's Davion "Fatrat" Brown, left, and Trai Ferguson are shown at the school in Richmond, Va., on September 14, 2022. 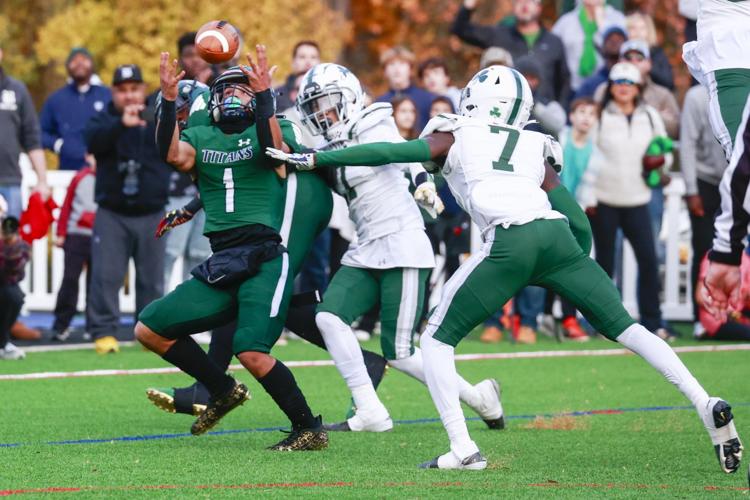 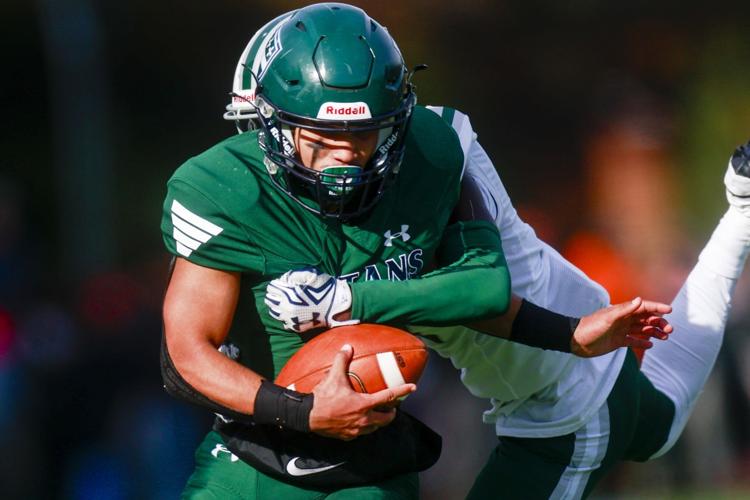 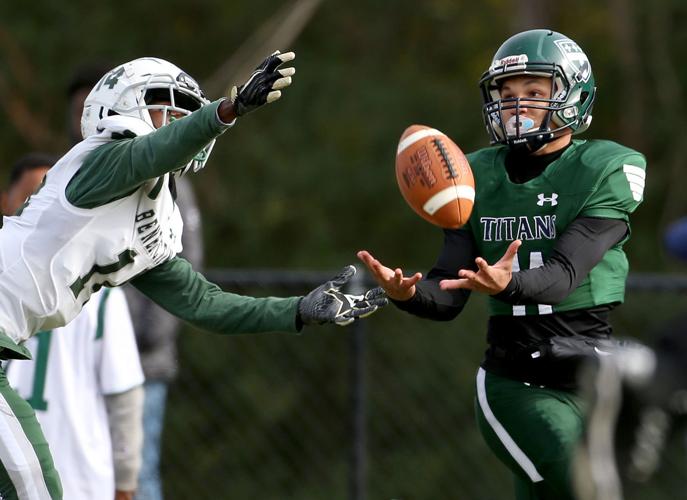 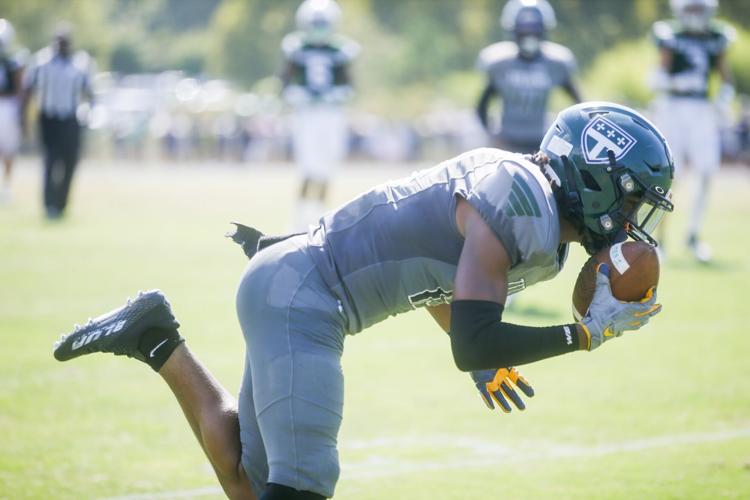 The voice of former UVA standout and NFL linebacker Wali Rainer booms across the practice field.

Head coach Sam Mickens looks on pensively, pointing out and describing the qualities of everyone, from committed stars to emerging newcomers.

And senior Navy recruit Trai Ferguson talks to a reporter alongside freshman standout and fellow wideout Davion Brown as sophomore QB Taegan Logan drops back to pass during drills on a hot Wednesday afternoon in mid-September at Trinity Episcopal.

Junior running back Trey Grant kneels alongside the receiving duo during their interview, scanning his eyes across the field and taking in all that comprises the VISAA's new power.

Mickens led Trinity (3-0, No. 4 in the Times-Dispatch Top 10) to VISAA Division II titles in 2014 and 2015. But last year's Division I championship was a first for the Titans under their new classification.

Though if you ask coaches and players, that crown is nothing but a thing of the past. The Titans have long since moved on to 2022. Trinity is nowhere near where it wants to be, only scratching the surface of its potential, they say.

"This year, it’s really about us and getting this team to a point where if they execute it doesn’t matter what the school is, who they have. If they," Mickens said, gesturing to the players around him, "execute ... then it’s just grey faces in front of them.

Complacency is indeed nowhere to be found as Ferguson lauds the intensity of drills playing out in front of him, pointing out the nuances of one-on-one matchups and describing how to give it your all in practice while still protecting the health of yourself and your teammates.

Ferguson said that group of seniors talks about leaving a lasting legacy behind them on Pittaway Drive.

"Just leaving a footprint on Trinity, teaching the younger guys, pushing them to be great, and that’s with everybody, every drill, every play, every game, how you treat your body, everything," said Ferguson, who caught the game-winning touchdown and 2-point conversion in the 22-21, title-game win over Benedictine.

"We just want you to be your best. We’re going to the next level, so we know what it takes, so we’re just trying to integrate that in our growth here at Trinity.”

Originally from the East End, Brown, nicknamed "Fat Rat" by his father because he entered the world on the chubby side as an infant, came to the Southside school to be a part of Mickens' project.

A highly touted youth talent who started playing at age 4 and spent time with the Powhatan Chiefs and Rich City Spiders, Brown has six TDs through three games this season, including three second-half scores in a season-opening 21-7 victory at Benedictine which Mickens called a signature win for his program.

"He's got all the talent in the world, it's just getting comfortable in his shoes," said the senior of the freshman's growth, adding that he's been "blown away" at how fast Brown picked up the playbook and developed chemistry with Logan.

Brown said Ferguson has been a brother to him since he first stepped onto Trinity's practice field. The freshman has already attended camps at South Carolina, Duke and Virginia Tech, and recruiters have reached out Trinity coaches asking about his talent.

“I think all these coaches here improved on my talent, if they weren’t here I wouldn’t be as good as I am now, they bring the motivation to me," Brown said.

Though Mickens said Logan probably has the hardest job of all figuring out how to feed his plethora of weapons, Brown and Ferguson say there's no underlying tension between the top targets, only brotherhood and support.

"It’s a dog-eat-dog world out here, but at the end of the day in the locker room it’s all love. We talk about it all the time, we make fun of each other, but we wouldn't be where we are now without all these guys.”

Ferguson, Brown and their Titans look to avenge one of their three losses from last year Saturday, when they host Episcopal (Alexandria, 1-0) at 2 p.m.

Walking back across the Trinity campus that Wednesday, it's apparent that it's not just the Titans football team making waves this fall.

Practicing on the adjacent field, the Titans' boys soccer team (7-0-1 as of Friday) is the No. 1 team in the season's first VISAA poll, the first time its ever been the top-ranked team in Division I.

And practicing toward the front of the school is the field hockey team, currently 8-1 including a 2-1 win over reigning state champs Norfolk Academy, which Trinity lost to in last year's VISAA championship game.

Trinity AD Anna Prillaman said the widespread success goes back to the administration's last strategic plan, where they "harped on operational excellence, and athletics was no exception to that."

"What we've done is just made sure to treat the small things like big things in our whole athletic program, and due to that, we've created an environment where coaches and athletes feel like they're supported and put in the position to succeed in however they want to define that success," Prillaman said, noting the mutual support from one program to another.

"It's truly a community of inclusiveness and everybody feels like they're a part of something bigger than themselves."

High school 🏈 Week 6: Player of the week poll, local game stories, summaries, schedule and scores from around the state

Dinwiddie, Bird, Hopewell, Powhatan, Manchester, Midlothian, Petersburg, Thomas Dale all roll. Varina survives scare at Hanover. Benedictine comes from behind to beat St. Chris, Trinity Episcopal comes back to win in Maryland. Plus scores from around the state and next week's schedule.

Trinity Episcopal receivers Davion Brown (left), a freshman standout, and senior Trai Ferguson, a Naval Academy recruit, have formed a strong bond since Brown joined the program. The duo has combined for nine touchdowns through three games this season.

Trinity Episcopal's Davion "Fatrat" Brown, left, and Trai Ferguson are shown at the school in Richmond, Va., on September 14, 2022. 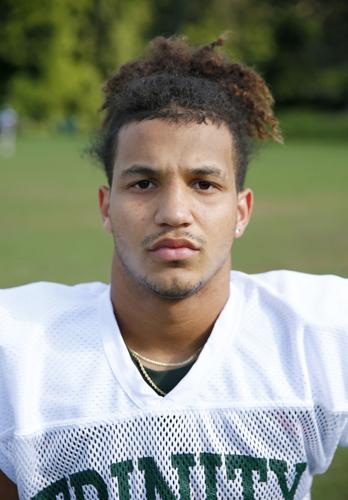 Trinity Episcopal's Trai Ferguson is shown at the school in Richmond, Va., on September 14, 2022. 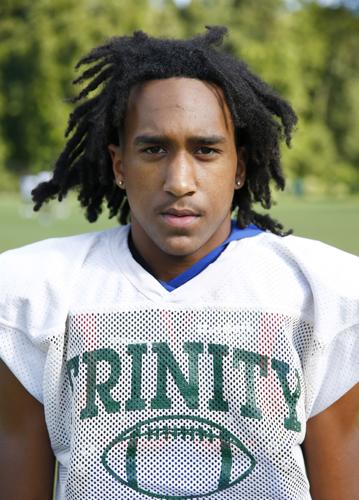 Trinity Episcopal's Davion "Fatrat" Brown is shown at the school in Richmond, Va., on September 14, 2022.