Adopted from Russia, Monacan High's Tyler Hensley has developed into a quarterback who will play in college
0 comments
Share this
1 of 5 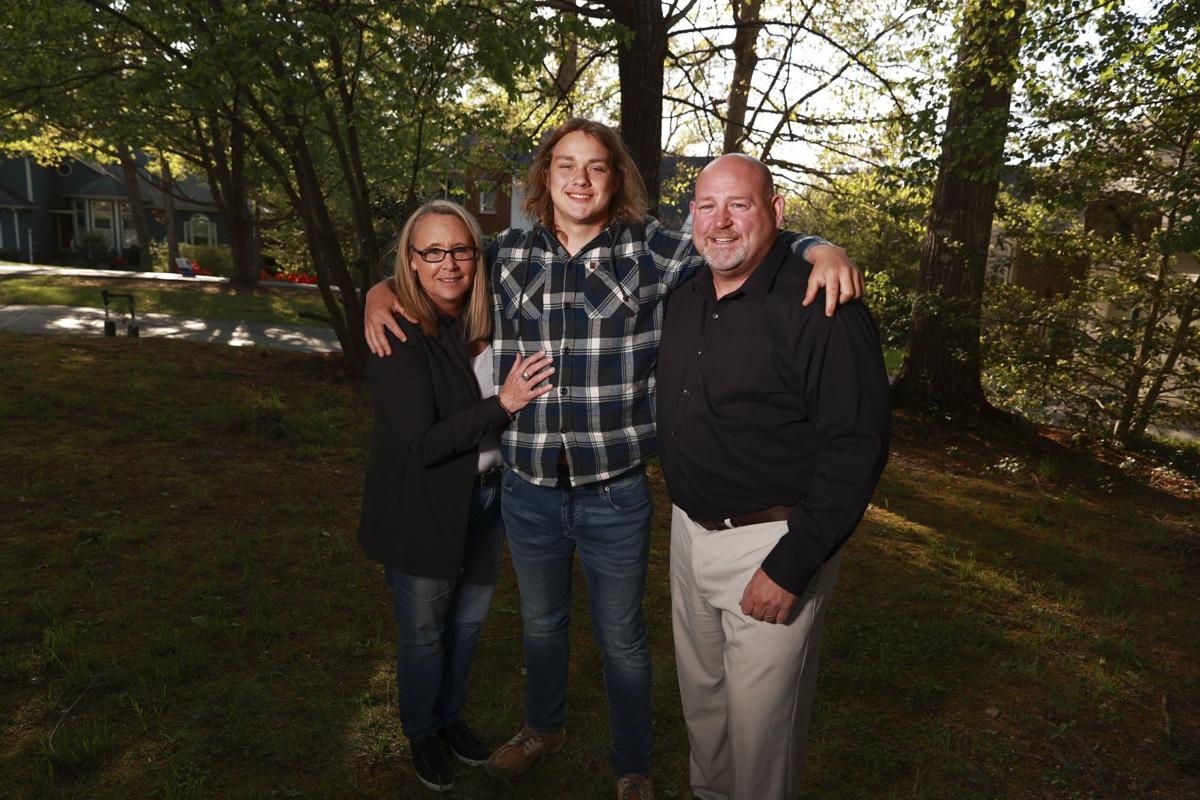 “It’s been a wonderful experience. The greatest accomplishment of our lives, I would say.”

Joe Hensley (right), on he and wife Kim adopting Tyler, who was born in western Russia 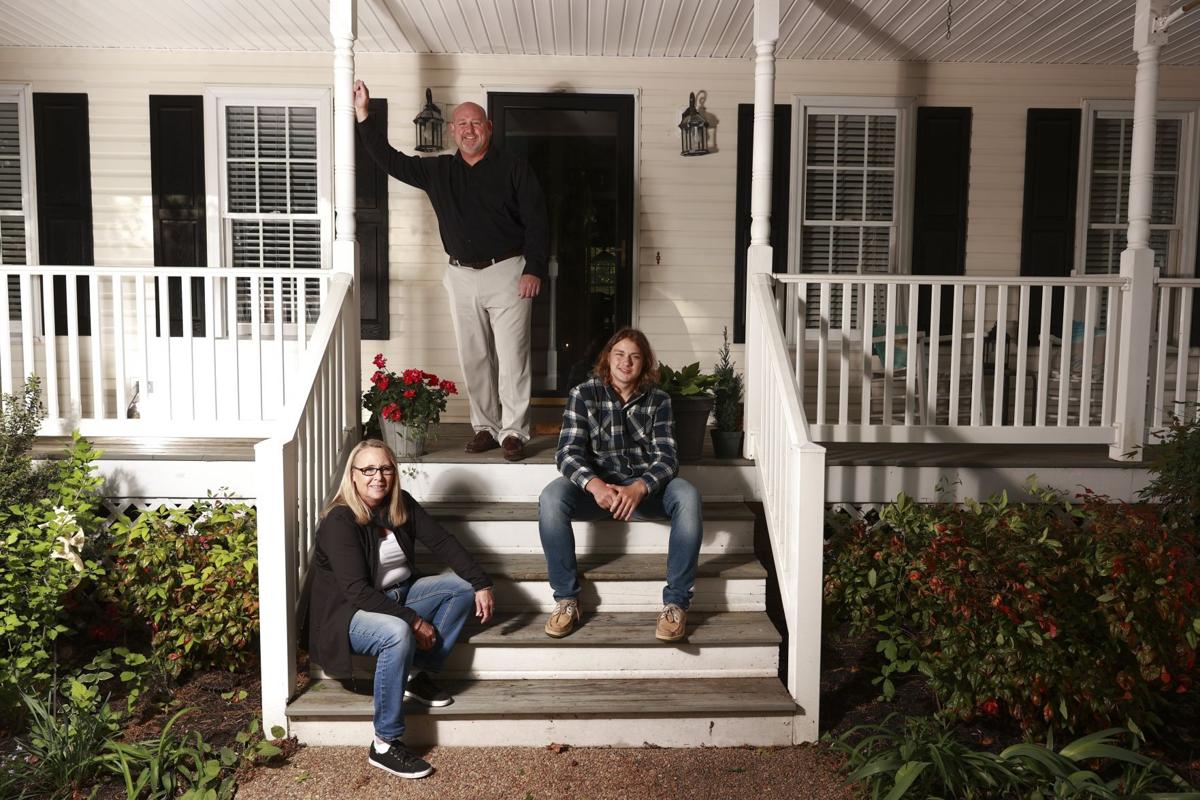 Kim and Joe Hensley and their son, Tyler, are seen at their home in Midlothian.“He’s naturally tough,” Joe said of Tyler. “It’s probably a part of that Russian DNA. They produce some great fighters, great athletes, hockey players, basketball players. He’s got it in him.” 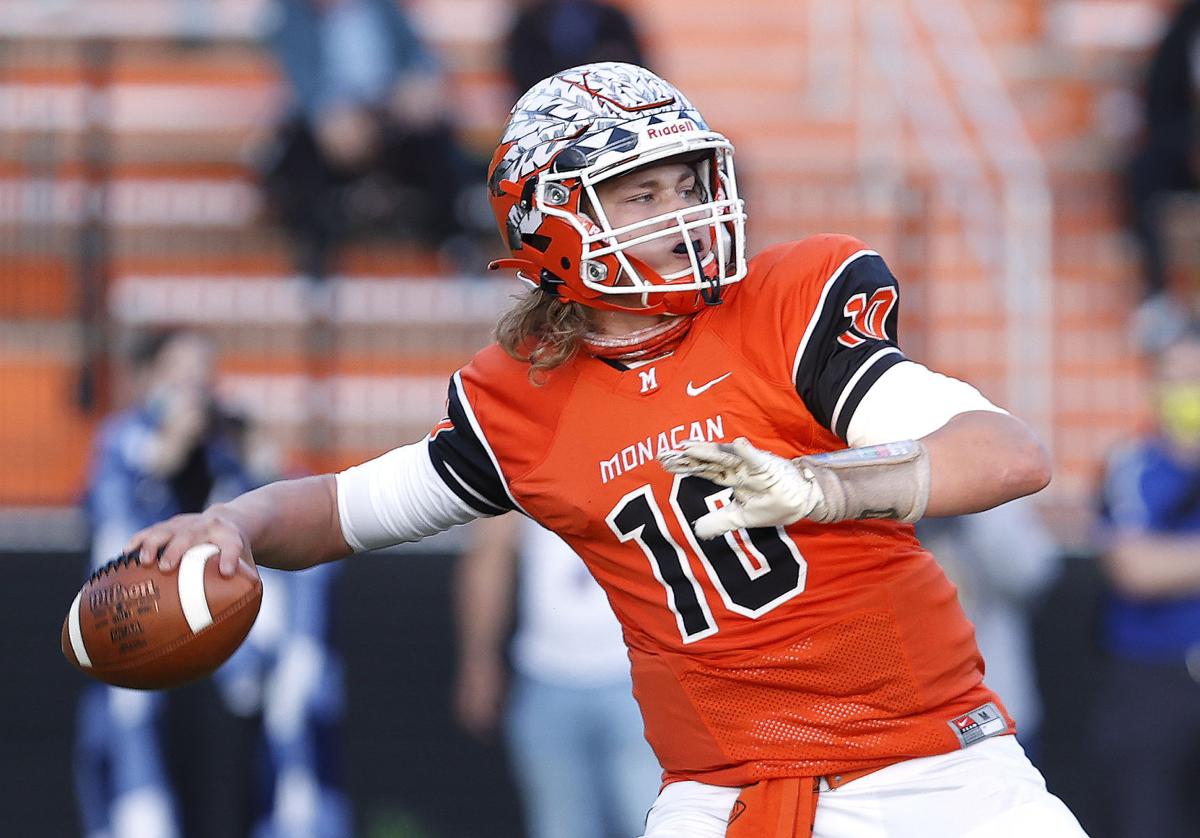 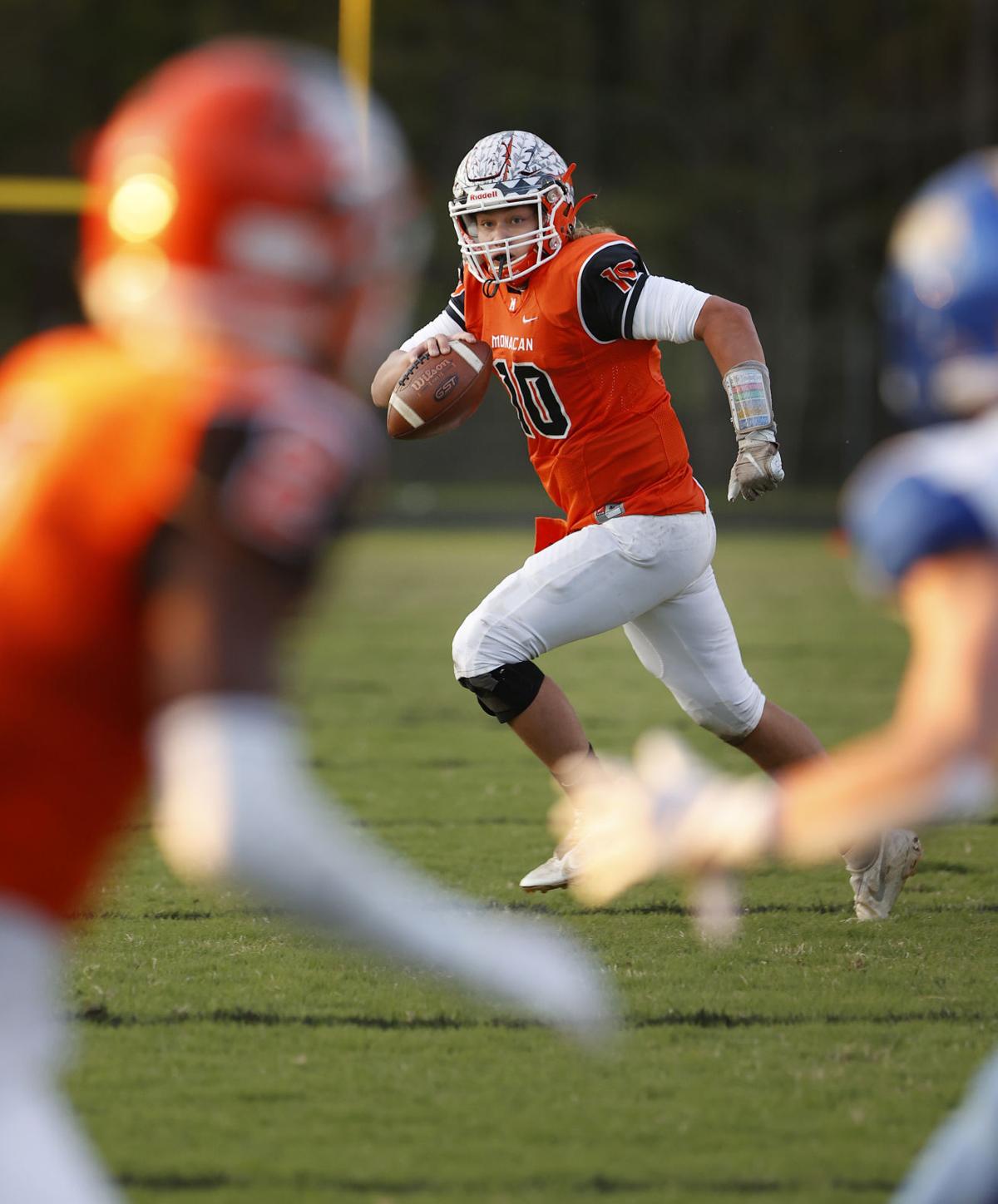 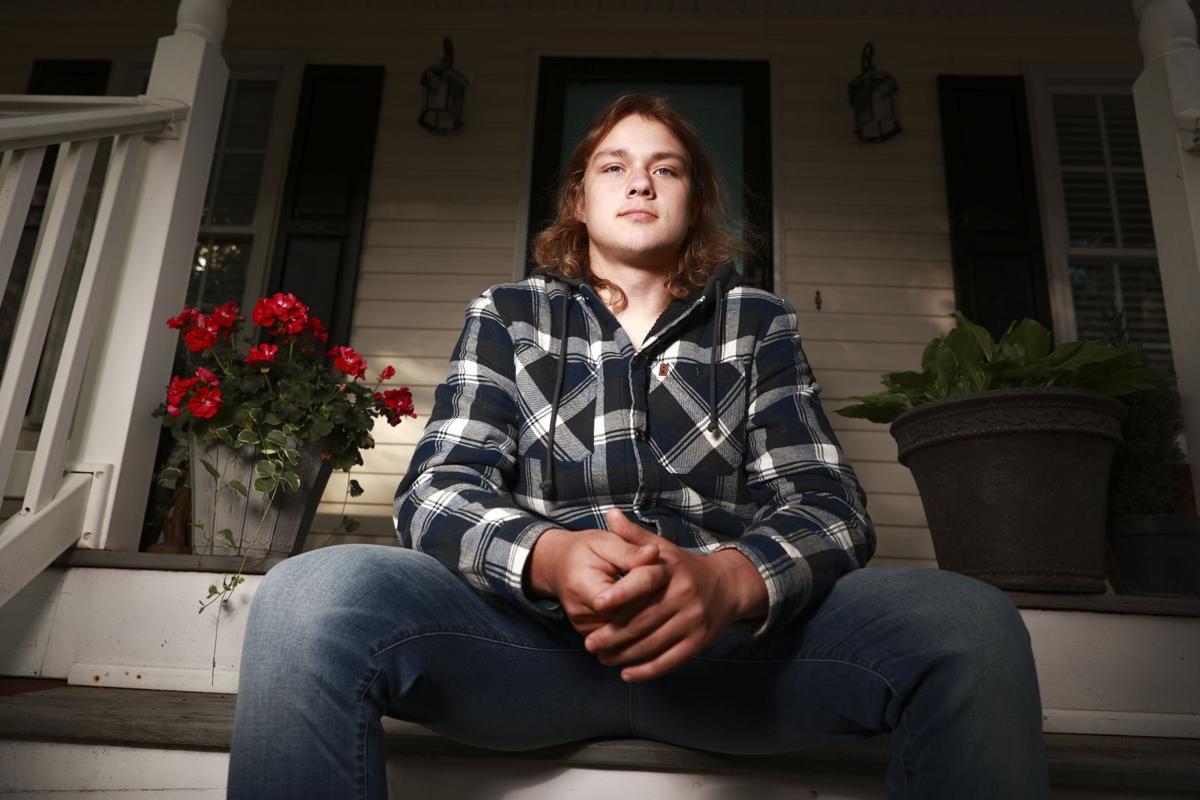 Tyler Hensley is photographed on Thursday, April 22, 2021 at his home in Midlothian, Virginia.

An older gentleman, perhaps a grandfather, brought a newborn boy to a hospital in the city of Kostroma in western Russia on Valentine’s Day in 2003.

The baby, a little more than 7 pounds and almost 23 inches long, was just a few hours old.

The man said the family could not care for the infant and asked if the hospital would.

The baby stayed in the hospital for a month before being turned over to an orphanage. The local paper put out notice that a child who had been born on Feb. 14 had been moved to the orphanage, in case the family had reconsidered.

The director of the orphanage, named Valentina, eventually named the baby Valentin Alexsandrovich Zimin — after Valentine’s Day — before he was put up for adoption.

That was the story relayed to Joe and Kim Hensley when they adopted the boy when he was 6 months old and brought him to Midlothian.

They named him Tyler. He played baseball and basketball as a youngster before devoting himself to football and developing into a strong-armed, still-growing, 6-foot-2, 210-pound quarterback at Monacan High.

The senior with hair cascading from his helmet threw for 1,594 yards in eight games this season, with 16 touchdowns and three interceptions. The Chiefs went 7-1, losing 27-21 to King George in the Class 4, Region B championship game.

He has committed to play at NAIA Thomas More University in Crestview Hills, Ky., near Cincinnati.

“We’re very blessed to have him,” Joe Hensley said, “and he’s blessed also to have the opportunity to be an American.”

When she was working as a dental assistant, Kim Hensley had some patients who had adopted a child from Russia.

Unable to have children, the Hensleys decided to pursue that option, something that’s no longer possible since Russia has prohibited U.S. citizens from adopting Russian children since 2013.

In March of 2003, Kim received a videocassette of Valentin Alexsandrovich Zimin.

“It was a Friday,” said Joe, a former boxing promoter who’s in the mortgage business. “I had finished work for the day ... and I was taking a nap. We looked at that and saw the little baby. He was a month old, and they said, ‘This is the one that you’ll be adopting.’”

The Hensley’s made their first trip to Russia in June of 2003. They flew into Moscow and were driven about 4 ½ hours to the baby orphanage in Kostroma, a Russian city on the Volga River believed to have been founded in 1152.

“As soon as they brought him out — he had this little blue, full-length pajama onesie on — I just grabbed him and held him,” Joe said.

After returning to the U.S. for a waiting period, the Hensley’s went back to Russia in August, completed the legal process and brought their new son to Midlothian.

Tyler wanted to play football as a youngster, too, but Joe looked at long, lanky, fragile legs that reminded him of a baby deer and initially said no. The family had moved to Joe’s hometown of Bedford, so Tyler played baseball and basketball there.

He persisted about playing football. He thought it would be cool and fun because of the hitting. So Joe relented when Tyler was 9.

He got some quick insight into his son. In practice, Tyler zeroed in on making a tackle on a kickoff return when he was smoked by a teammate who could deliver crunching hits. He lay there for a few moments, got up and kept playing.

“I get him home and take his jersey off, and he hit him so hard he broke his shoulder pads,” Joe said.

“He’s naturally tough. It’s probably a part of that Russian DNA. They produce some great fighters, great athletes, hockey players, basketball players. He’s got it in him.”

Hensley was a defensive tackle his first year. By his second year, it was apparent to his youth coaches that Tyler had something else: an arm. He became a quarterback.

Hensley, though, didn’t really start to blossom athletically until his teenage years. He played on the varsity as a sophomore at Liberty High in Bedford before the Hensleys moved near Monacan.

He didn’t win the starting job for the Chiefs as a junior. J.J. Allen did. But in the second quarter of the third game, Monacan coach Jim Henderson said Allen went out for a few plays to check out an injury. Hensley came in and threw a touchdown.

Hensley threw another TD pass in the quarter. Then another. Monacan beat James River 34-20, and Hensley became the starter.

“I felt bad for J.J., who has worked his butt off and had come up through our program,” Henderson said. “J.J. went out and played some receiver, played some defensive back for us, and was … on the field and still contributing.

“You want to talk about a selfless teammate. J.J. went through the playbook with [Tyler]. It was amazing to see the team atmosphere. ... And Tyler just soaked up everything and anything he could get.”

“He taught me how to run certain plays, certain tips and tricks on some,” Hensley said. “Or if asked him a question, he’d always answer. I couldn’t thank him enough for that.”

Hensley can throw a football about 70 yards. Henderson, though, said he didn’t really get a full appreciation of the arm strength when Hensley first arrived.

Monacan was playing in a 7 on 7 gig with several other teams. With only about 30 yards on the Chiefs portion of the field, Hensley didn’t have the opportunity to throw the ball very far.

That became more apparent in practice and games, so much so that “every time we would call [a deep route] he would wait to let it go until they got as far as they could and he wouldn’t out-throw them,” Henderson said.

Henderson and his staff worked with Hensley on harnessing his arm and developing more touch. Later in the season they took him into the gym, where space was confined and Hensley’s passes would hit the wall if he overthrew a receiver.

His arm is “a gift,” he said, but he’s also worked a lot to improve his strength.

“I’ve gotten a lot of help,” he said, including from quarterback coaches Malcolm Bell and Terrell Hackney. “I still have a lot to learn and a lot to improve on.”

Last season was a learning-each-other curve for Henderson and Hensley, and there was some more this season because teams weren’t able to do much during the offseason because of the pandemic. Henderson feels cheated he didn’t have more time with Hensley, who’s more of a pro-style quarterback who usually scrambles to throw instead of run.

Henderson said what he saw in practice was “about a quarter of what [Hensley] does” spending time with his receivers as they worked on their own. Hensley is a student of the game, he said, and a bit of a perfectionist, wanting to do things over until he gets it right.

His rapport with his receivers was obvious. Kyjuan Pettus and Elijah McLeod combined for 69 catches, 1,154 yards and 12 TDs.

His father believes Tyler’s recruiting was affected by all that’s come with the pandemic — the inability to go to camps last year and not playing games until this spring, for instance.

Some high-level NAIA schools wanted him as well, but they were farther away than Thomas More, which offered quite a bit of athletic and academic scholarships, his father said.

“At 9, 10, 11 and 12, if there was a kid that you would have said is not going to play college football, you would have picked him for sure,” Joe Hensley said. “Tyler wasn’t the most gifted athlete.”

The big gift, he said, was adopting him.

“It’s been a wonderful experience,” Joe said, pausing for a moment to gather his emotions.

“The greatest accomplishment of our lives, I would say.”

“It’s been a wonderful experience. The greatest accomplishment of our lives, I would say.”

Joe Hensley (right), on he and wife Kim adopting Tyler, who was born in western Russia

Kim and Joe Hensley and their son, Tyler, are seen at their home in Midlothian.“He’s naturally tough,” Joe said of Tyler. “It’s probably a part of that Russian DNA. They produce some great fighters, great athletes, hockey players, basketball players. He’s got it in him.”

Tyler Hensley is photographed on Thursday, April 22, 2021 at his home in Midlothian, Virginia.