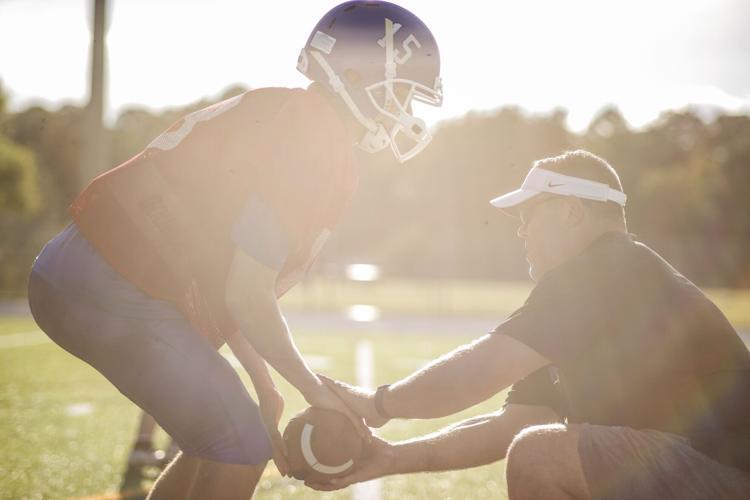 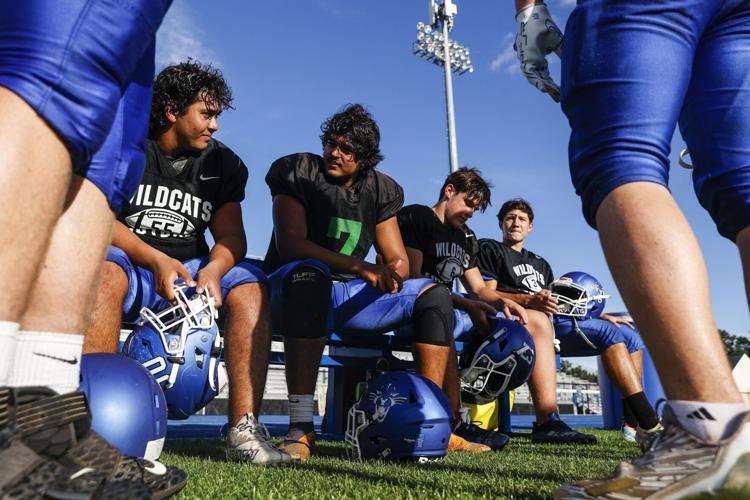 Deep Run players take a break during practice. This year’s Wildcats are a young group working to build a winning foundation. 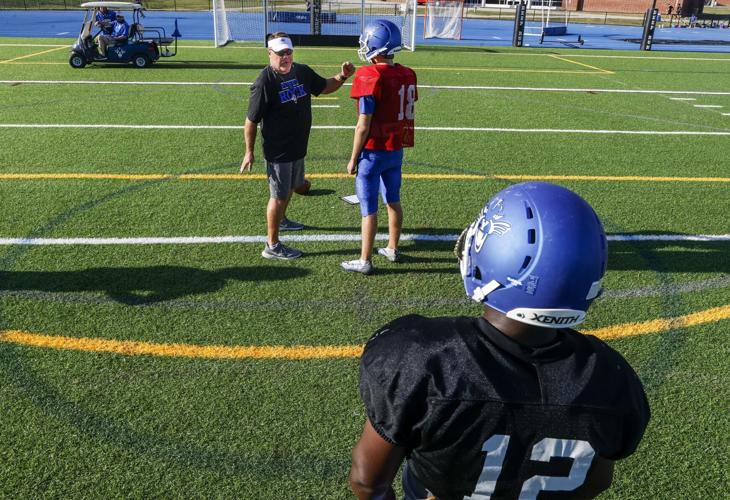 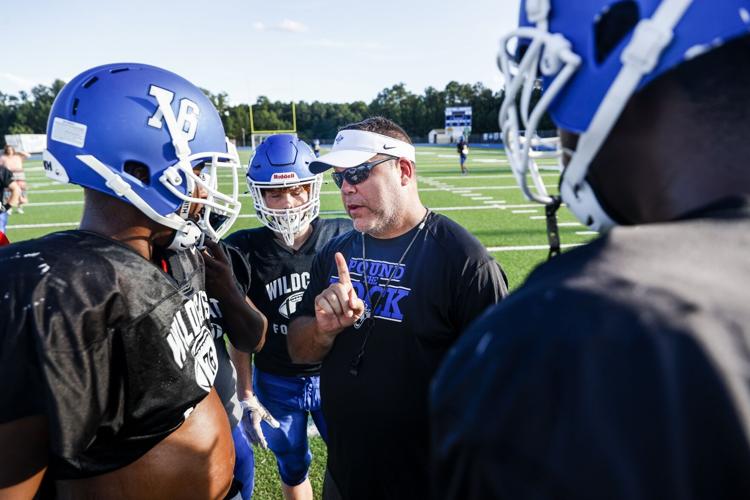 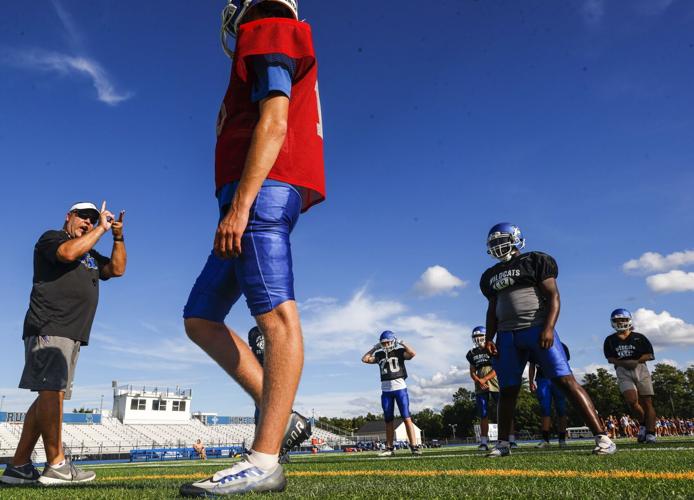 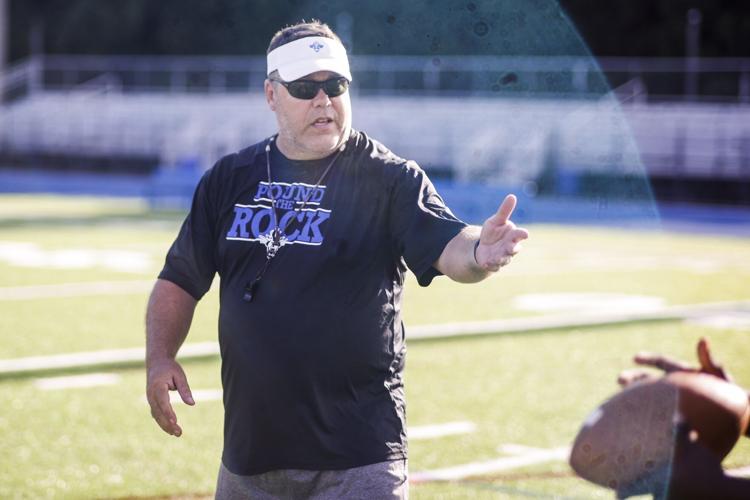 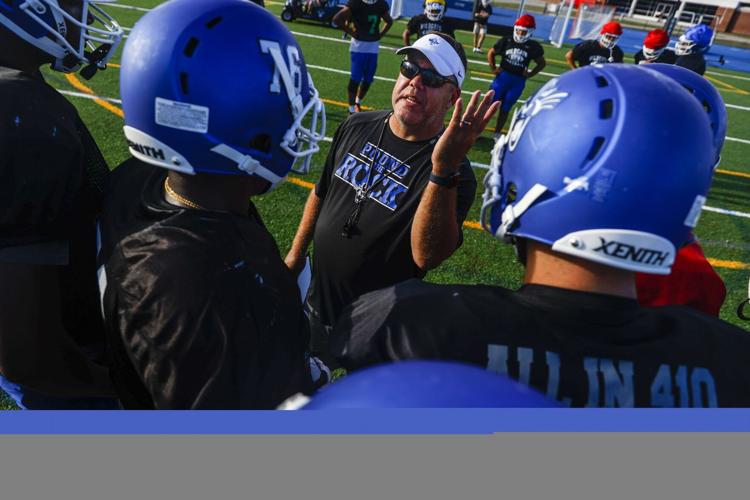 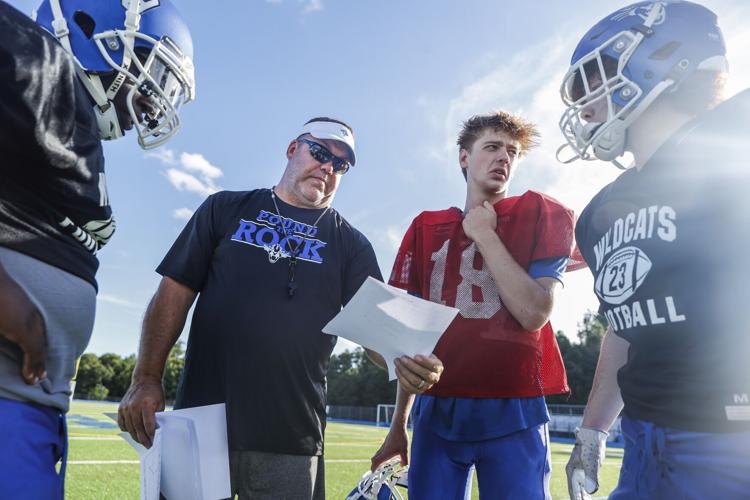 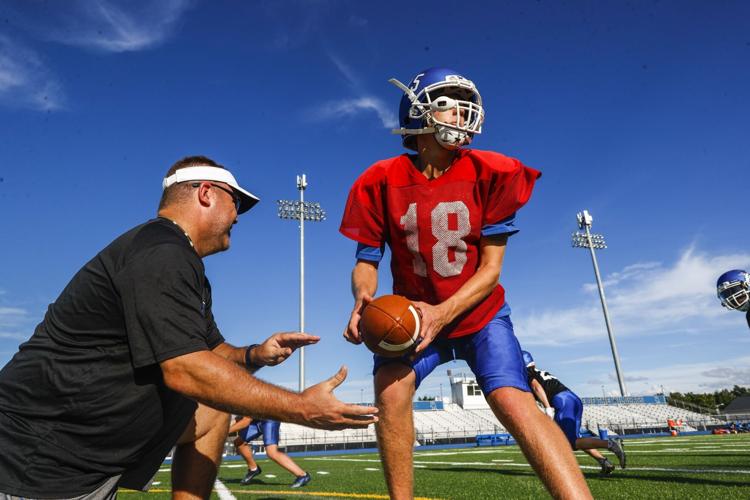 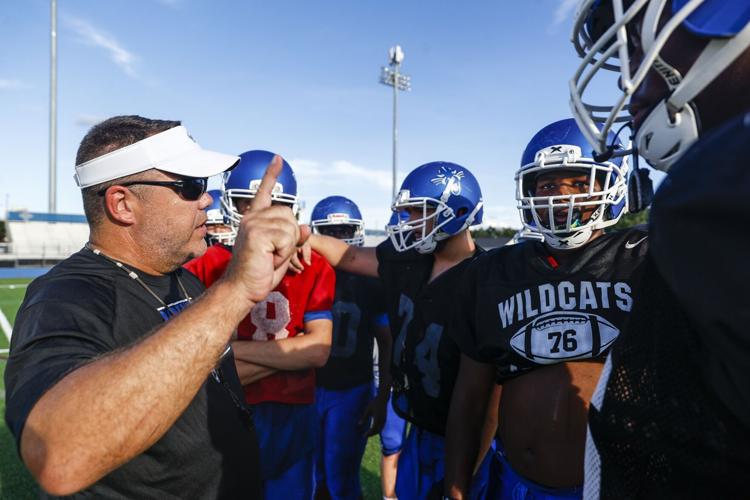 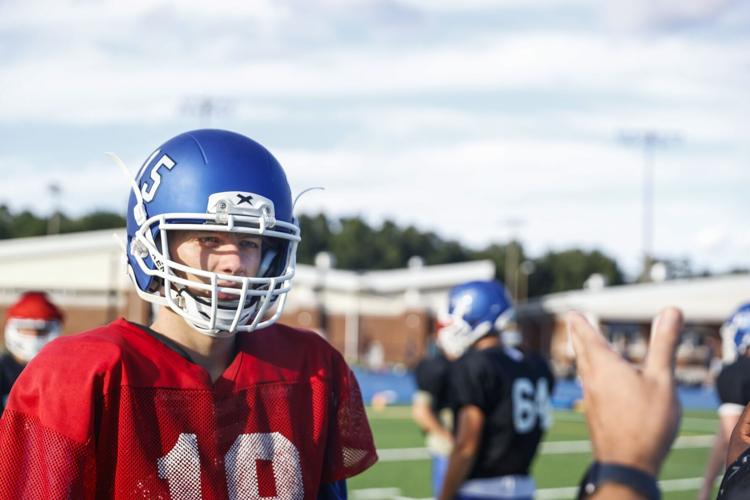 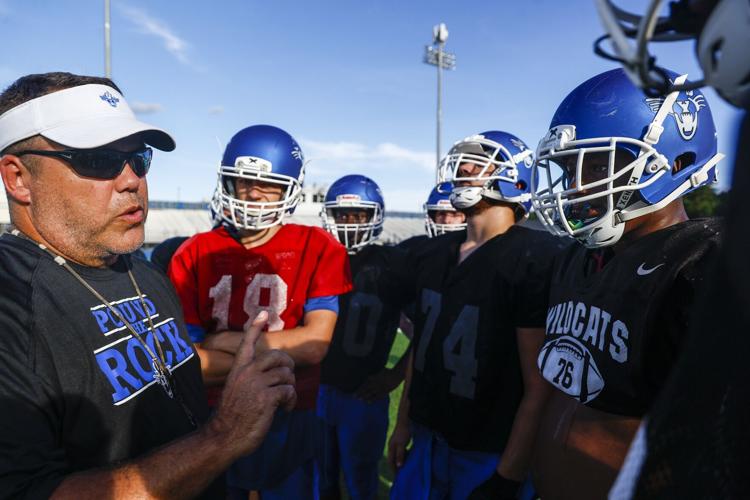 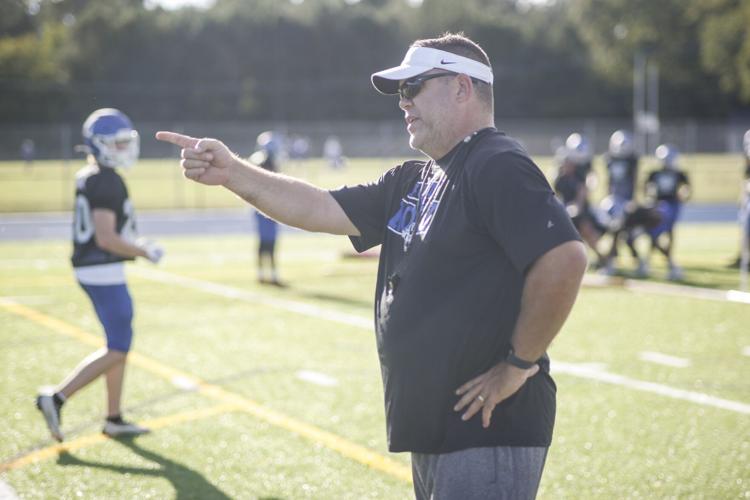 The 35-year-old, second-year head coach is in the midst of rebuilding a once-proud Wildcats program that won 14 straight regular-season games from 2018 to 2020.

Deep Run still has a streak going in 2022, but the current run of form is not one Mullinax would like to see continue. His team has lost all 12 times it has taken the field in 2021 and 2022.

There are myriad reasons Mullinax and the Wildcats have yet to come out on top. Mullinax had just over three months to prepare for his first game after being hired in May of 2021 following the sudden retirement of his predecessor, Chad Hornik.

His first loss came before he and his family of five could even move into their new house.

Mullinax currently has a program that has more freshmen than upperclassmen. And neither group knows what it’s like to win.

Only one player on the team has ever won a game at the varsity level. And the junior varsity hasn’t won a game since 2018.

Last year’s 0-10 varsity team didn’t have one returning All-Region player despite being two years removed from an undefeated regular season.

Mullinax has every excuse imaginable in his pocket. Still, he takes full accountability for the hand he’s been dealt.

So last Tuesday when Mullinax made an error on the daily practice schedule, he hit the dirt and completed a set of up-downs — just as he would have made his players do had they been the ones to make a mistake.

Mullinax uses a lot of coach speak. Terms and words like “buy-in,” “character,” and “belief” all surface as important themes when he describes what he’s attempting to build. He doesn’t view the job as a quick fix, but as one that’s starting from, essentially, scratch.

It’s one that he can put his fingerprints all over.

“It’s a foundation that you can build upon, but it’s stripped down to the studs,” he said.

Senior lineman Nick Gagliardi is the lone current Wildcat who has contributed to a victory at the varsity level. He was an All-Region player in 2021 despite the lack of team success. His only experiences under the lights with Mullinax have ended in losses.

Throughout the adversity, Gagliardi saw something in the 2021 season that showed his team had the right makeup.

“We never gave up,” Gagliardi said. “Kids weren’t leaving. We didn’t point fingers. The energy was definitely better coming out of the season than going in.”

Not only did kids return to the program in 2022. Mullinax even had to order additional helmets and equipment because the JV and varsity rosters were growing.

Senior Matt David hasn’t won a football game in nearly five years of JV and varsity football. He was part of a junior varsity team in 2019 that went 0-10 while the varsity went 10-0.

David, a linebacker and tight end, doesn’t have aspirations for a deep postseason run to close out his career. He’s realistic in his goals. But he does want to be an example and leave a legacy.

The standout linebacker, tight end and captain could easily focus on individual goals. Instead, he wants to help Mullinax instill a culture where everyone in the program is a priority. There are 30 freshmen in the program of 65.

And David doesn’t want to see that group go through what he’s been through.

“Our guys, we’re invested in each other,” David said. “And Coach Mullinax is in it for the long haul. He’s less concerned about a select few guys and more concerned about everyone.”

Mullinax is focused on where his program is going, not where it’s been.

His team’s results so far this season are a Mechanicsville forfeit that technically granted Mullinax his first win after the Mustangs paused their season amid an investigation into assault allegations within the program.

There’s much work ahead for Mullinax and the Wildcats to get the program back to being a consistent winner. The seniors, though, don’t have the same timeline the rest of the program does.

Mullinax is eager to make progress on the rebuilding process while also having something immediate to show for his seniors.

“I just really want to see these seniors get that feeling of knowing that it’s worth it. That tangible feeling of victory. And that shared struggle with your teammates and being in a position where you can look at it and say ‘We won. We did it together.’”

David echoed his coach’s sentiment with the same determined tone.

“This year, regardless of what happens, we’re just always gonna get back up and keep going until it happens,” said the senior. “We have one goal: we just want to win. We’re willing to do whatever it takes.”

The Wildcats (1-2) next chance to end the on-field losing streak comes Friday at Patrick Henry (1-1).

High school football Week 5: Player of the week poll, local game stories, summaries and scores from around the state

804 Varsity coverage of Week 5 of the high school football season around the greater Richmond area, plus scores from across the state and next week's schedule.

Jim Holdren has coached runners for 60 years. As he expands his legendary impact, he believes he's the 'lucky' one.

"He set the bar on how to coach a successful program in the city of Richmond and beyond.”

A power on Pittaway Drive: From Ferguson to Fat Rat, Trinity Episcopal still searching for its peak

"Just leaving a footprint on Trinity, teaching the younger guys, pushing them to be great, and that’s with everybody, every drill, every play, every game, how you treat your body, everything."

High school football Week 4: Player of the week poll, local game stories, summaries and scores from around the state

Game stories and summaries from around the Richmond region, plus all of Friday's scores across the state.

No. 7 Douglas Freeman overcomes Mills Godwin with big second half to remain unbeaten

“More than anything, it was just our growth as a program to fight through that adversity we faced at halftime. Last year, we weren’t able to do that. This year, we’re becoming more mature and figuring out how to do it.”

VHSL turns down Chesterfield's final appeal to create its own district, finalizes alignment plan starting in 2023-24

Our staff writers share picks and previews for the best action in Week 5 of the high school football season around the Richmond area:

Cover One's new Luke Reid Making a Difference Award will grant $15,000 annually for at least the next 10 years to two local coaches to be spent on their programs, separated into $7,500 installments apiece for one boys and one girls high school athletic team.

Hopewell High football coach Ricky Irby’s team may be struggling to find its balance offensively so far this season, but there’s been a safety…

Deep Run players take a break during practice. This year’s Wildcats are a young group working to build a winning foundation. 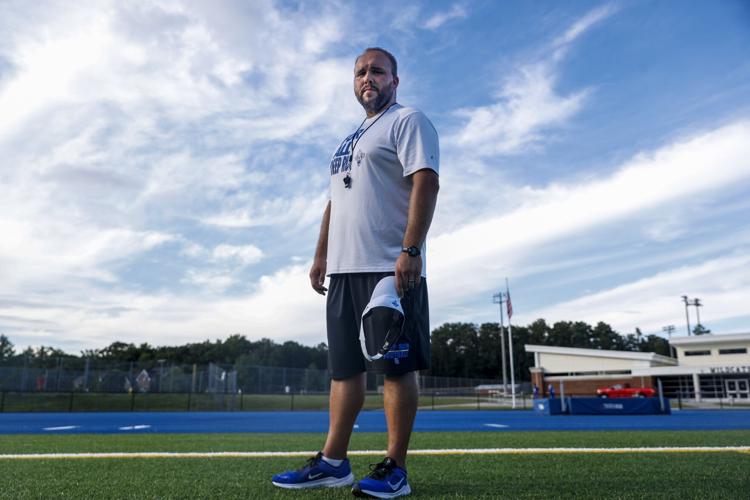