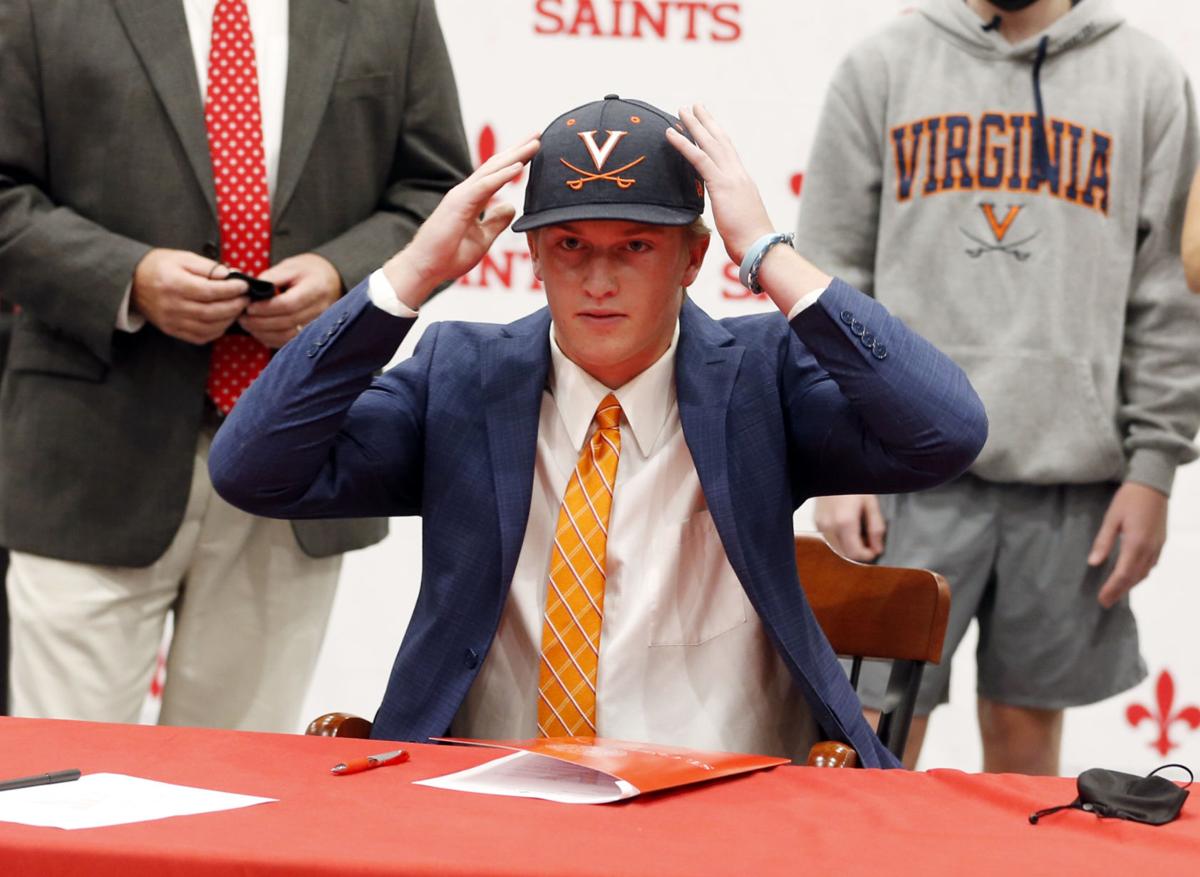 Griff O'Ferrall at St. Christopher's School on Wednesday, November 11, 2010, during the first day of early signing of national letters of intent for sports other than football. 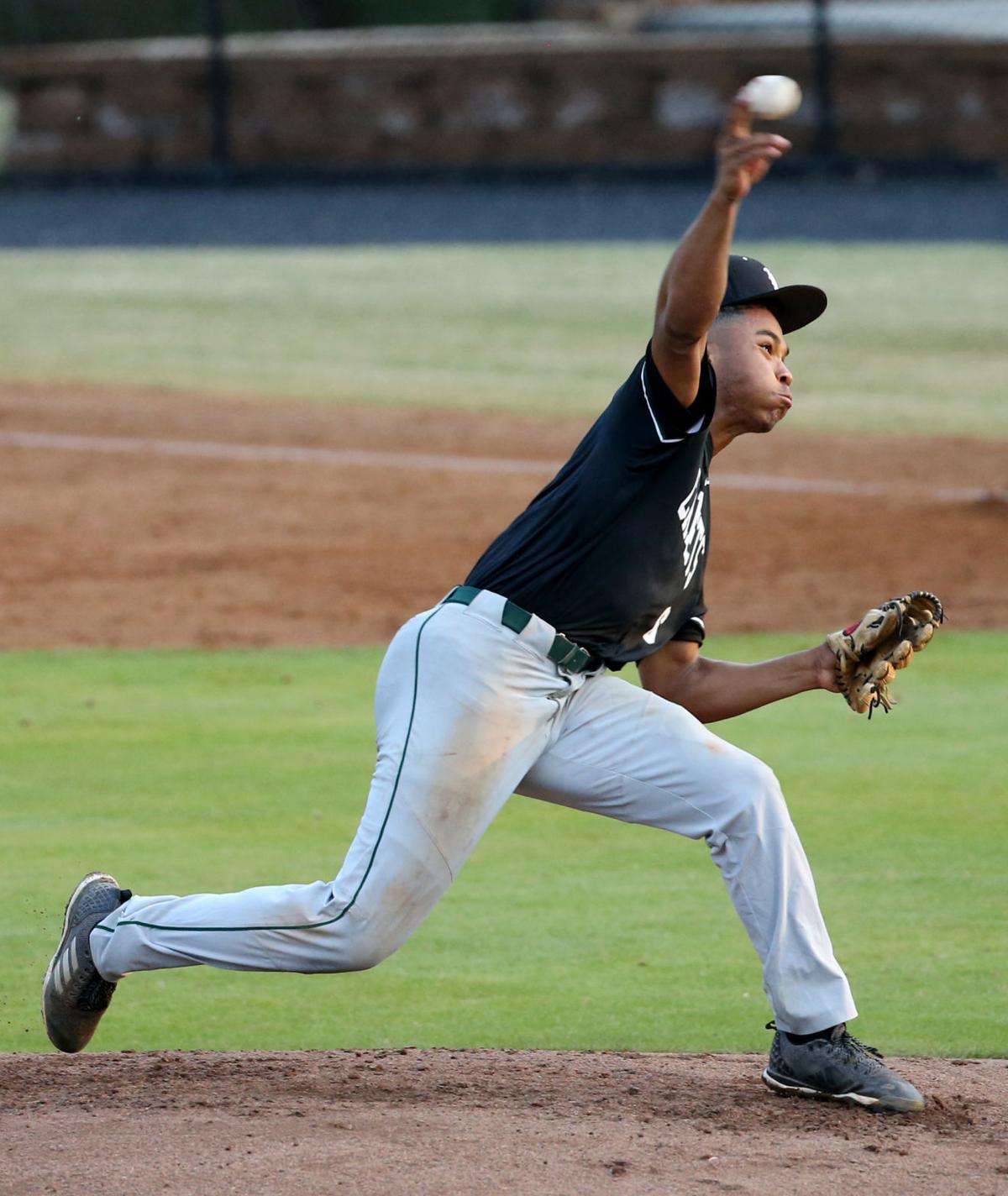 Michael Joyce, Atlee: The junior can be behind the plate or on the mound, where he has a fastball that can touch 90 mph. He has committed to play at James Madison.

Jay Woolfolk, Benedictine: The senior pitcher and center fielder has signed with UVA, where he will play football and baseball. Woolfolk is one of the state’s top all-around talents and a potential MLB draft pick. He owns a fastball that is consistently in the low-90s.

Macho Santiago, Douglas Freeman: The junior shortstop and pitcher has committed to VCU. As a freshman leadoff hitter who played several positions in 2019, he batted .442 and drove in 17 runs.

Ethan Brooks, Glen Allen: The junior middle infielder is another VCU recruit. As a freshman he started at third base, where Glen Allen coach Dave Savino said Brooks was “a magician defensively.”

Trent Pulliam, Godwin: The 6-2 senior pitcher, who has committed to JMU, blossomed after growing 6½ inches between his sophomore and junior years.

Douglas Freeman is breaking in several newcomers. The Mavericks do have some experience with Macho Santiago (SS/P), Will Lynch (P/INF), Andrew Bland (OF/P) and Carson Herod (C).

Glen Allen outscored opponents 21-1 in its first two games and may rely more on defense and pitching. Juniors Ethan Hudson and Jaden Kinsler are on the mound. Ethan Brooks is at short, with Eli Brooks, Drew Morris and Lucas Bauer in the outfield.

With Carter Lovasz, Connor Schumann, Andrew Jones and Ben Covert (Hampden-Sydney) on the mound, Midlothian should be in the mix. LF Ethan Smith (Lynchburg) and 1B Paul Broussard (H-SC) will help with some younger players, including sophomore Cole Feldman (3B).

Dinwiddie will be a factor behind p/SS Kevin Gunn (Longwood), its pitching and several seniors. Codie Maitland and Colby Massengill join Gunn on the mound. Jackson Severt (C/INF/OF) and Jaron Ward (OF) are seniors.

With a ton of players committed to Division I programs, Hanover can make a run at another state title. The Hawks won championships in 2013, ’14 and ’16 and were runners-up in ’09 and ’17.

Pitching and defense will make Mechanicsville formidable. It has Brett Allen, Jalen Strattman, C.J. DiNapoli, Dallas Hairfield and Dylan Robbins on the mound, and Ethan Serrano at short.

Patrick Henry has a lot of seniors but few returning starters. SS Cole Mallory, OF Bryson Baxter, Ben Williams (utility) and Tristian Sheldon (2B) are seniors.

Powhatan may have to rely on solid defense with little experience on the mound. Caden Beil (C), Stone Talley (INF/P), Ben Allanson (OF) and Connor Woodel are seniors.

Goochland should be a factor with Ayden Doczi on the mound, defense and a balanced lineup: Chris White (OF), Andrew Jones (INF/P), Mason Gregory (utility) and Riley Hite (INF/P).

Benedictine has struggled some with an inexperienced lineup, but it has an equalizer with Jay Woolfolk on the mound. Connor Handy and Michael Aleksa join Woolfolk. Third baseman Cory Adams was hitting .447 after 14 games.

St. Christopher’s has one of the top teams in the state, public or private. The Saints started 15-0-1. They have talent and depth on the mound with Coble, Nuckols, Kyle Haines and others, and defense and hitting throughout the order with O’Ferrall, Coble, Schmitt, Haines, 3B Curtis Hale, 2B Jacob Camley and others.

Collegiate has been around .500 this season. Juniors Donovan Williams (CF) and Eric McDaniel (INF/P) lead the way, along with John Ballowe (OF), Pearse Riendeau (OF/P) and Heth Alexander (P).

Juniors Josiah Harrison (OF/P) and Brian Curley (INF/P) are cornerstones for a young Trinity Episcopal team. Sophomores Carter Schuma and Logan Janney are on the mound.

Note: With the quick turnaround between seasons and the high number of spring sports, the Times-Dispatch is not doing capsules for every school. These highlights are based mostly on forms returned by schools to the RTD.

Griff O'Ferrall at St. Christopher's School on Wednesday, November 11, 2010, during the first day of early signing of national letters of intent for sports other than football.