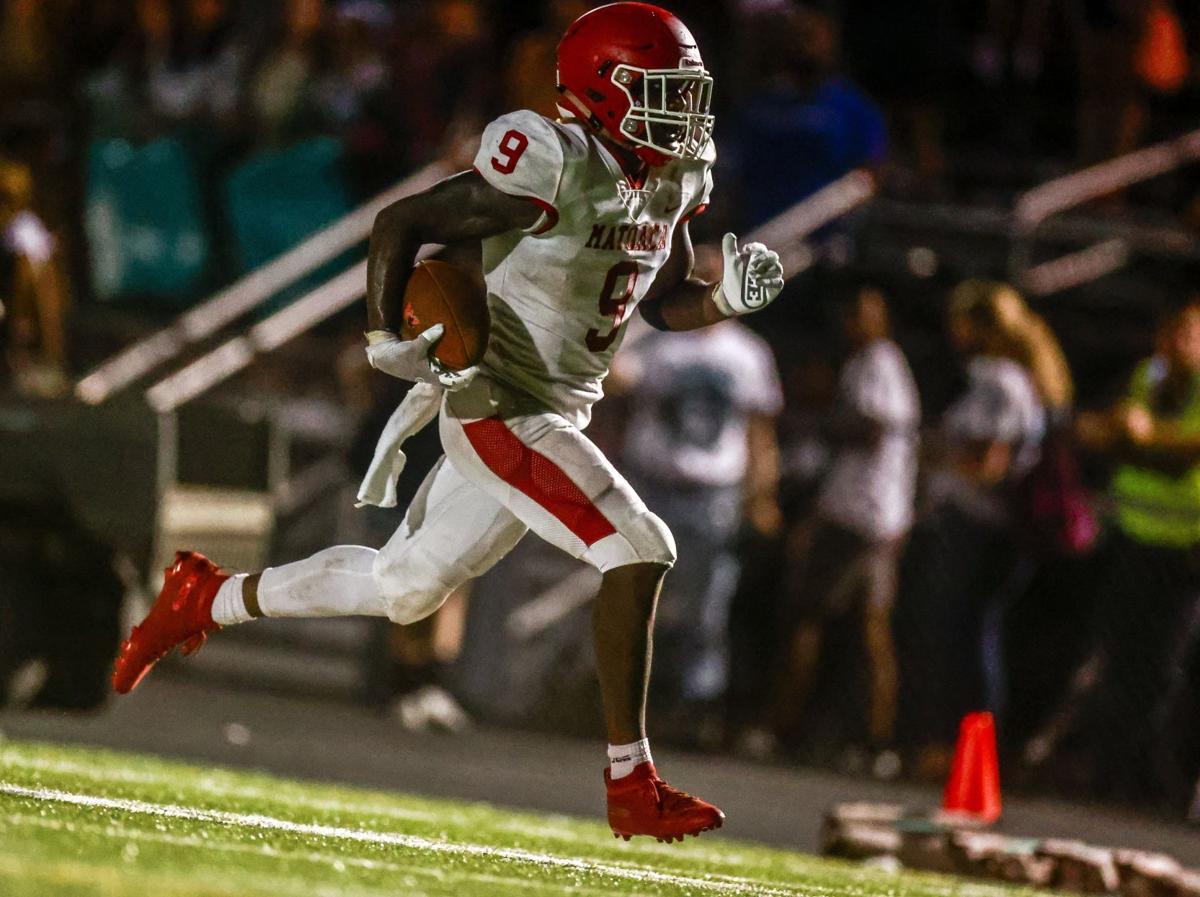 Matoaca running back Quentin Johnson, who transferred from Meadowbrook last year, runs for one of his three touchdowns in the Warriors’ road win over Glen Allen on Friday night. 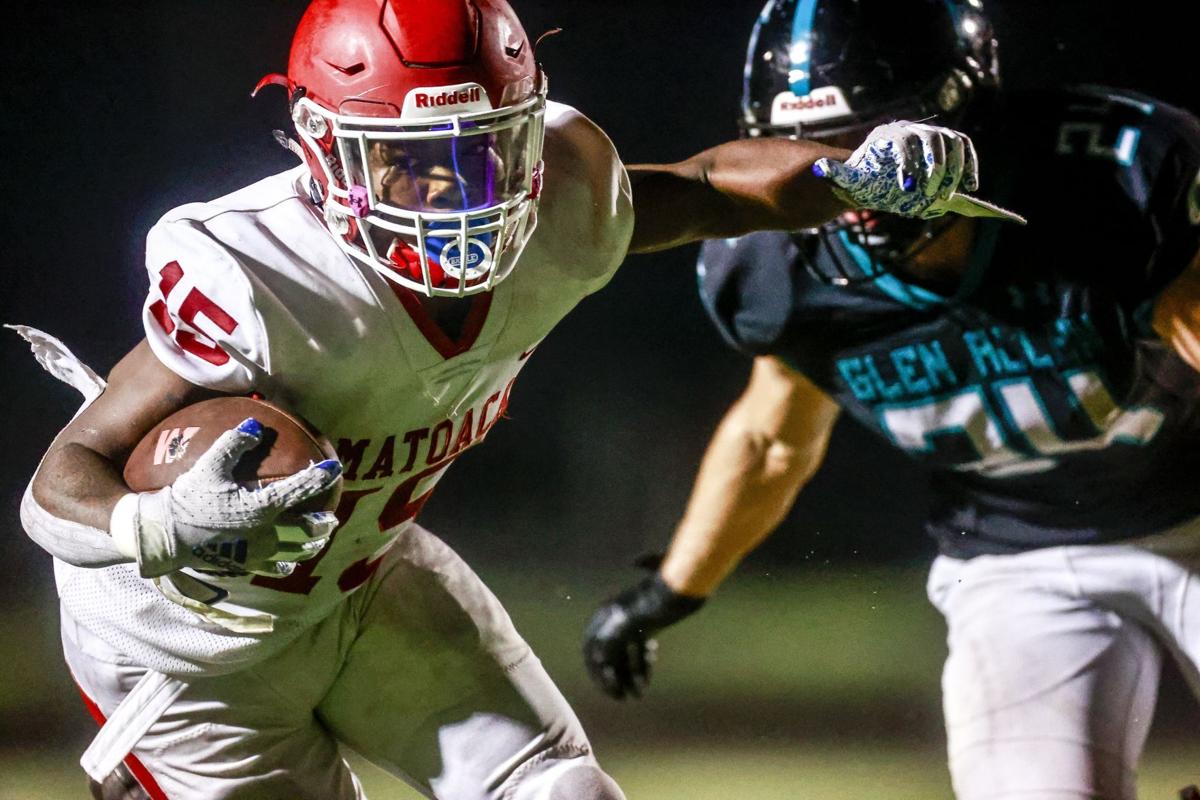 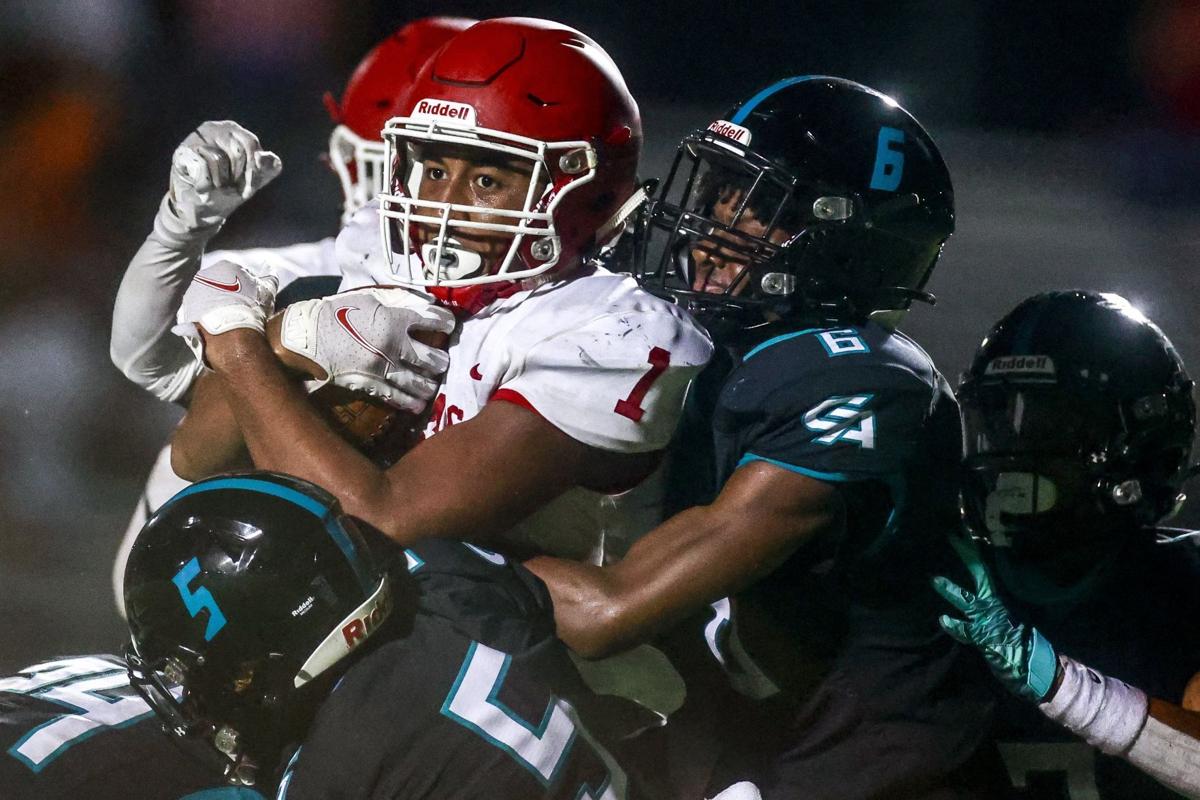 Matoaca running back Cameron Johnson (1) registered 62 yards on seven carries in the Warriors’ victory over Glen Allen on Friday night.

During two years at Meadowbrook, Quentin Johnson was a running back on the JV and a defensive end on the varsity.

When he transferred to Matoaca last year, Warriors coach Jay Parker saw the 6-foot-1, 200-pound Johnson as a big running back.

He ran for more than 400 yards in five games in the spring. Still, the senior was somewhat unsung — at least until Friday night.

Displaying power, elusiveness and sometimes making a lot out of a little, Johnson ran for 197 yards on 27 carries and scored three touchdowns as visiting Matoaca beat Glen Allen 31-17.

Johnson said he always was a big running back in youth league. He worked with a personal trainer during the summer and is stronger and more mentally ready, he said.

“I wasn’t scoring a lot [in the spring],” he said. “I was just getting a lot of yards. I had to work on getting in the end zone and finishing my drives.”

The Warriors can finish with a couple of big backs. Senior Cameron Johnson is 6-0, 210 pounds. He had 62 yards on seven carries and scored as the Warriors amassed 287 yards on the ground.

“I think our offensive line was the best unit on the field tonight,” Parker said. “There was no secret we were going to come in here and run the football. And that’s what we did.”

Q. Johnson appreciates the guys up front, too. He eats lunch with them to “make sure they’re happy.”

“They’re the ones who are going to take care of you,” he said.

Glen Allen took care of some long-distance downs with some big plays from quarterback Jordan Brown (8 for 17 passing, 109 yards) and Adrien Mosley (four catches for 53 yards, 15-yard rushing TD) while building a 14-7 lead in the second quarter.

Mataoca kept answering and tied the game at halftime. Marcus King’s interception on a deflected pass to start the third quarter set up the Warriors at the Glen Allen 41.

On one carry during that possession, Johnson was met in the backfield and dragged two tacklers for a 5-yard gain. On the next play, he was hemmed in trying to go wide, reversed his field and got 8 yards.

Glen Allen, No. 9 in The Times-Dispatch’s preseason rankings, had a chance to tie late in the quarter but stalled inside the Matoaca 10 and settled for Cole West’s 25-yard field goal. The Warriors matched that with Jon Gates’ 23-yard field goal early in the fourth.

Johnson put the game away with a 43-yard TD run with 4:44 left. The run required patience as he went around the left side, spotted a seam and split two defenders near the line of scrimmage.

The Warriors hope the victory is a sign of things to come. They went 1-4 in the spring while losing some close games to top teams.

“This is the best group I’ve had since I’ve been here as a head coach, and I expect a lot of big things out of this group.”

In a Friday afternoon game at Collegiate, Benedictine exploded into a 21-0 lead through the first half.

A balanced effort on the upper course at Pole Green Park resulted in 158 points, just five points better than runner-up Western Albemarle (163) in the 44-team, 350-plus runner field.

Matoaca running back Quentin Johnson, who transferred from Meadowbrook last year, runs for one of his three touchdowns in the Warriors’ road win over Glen Allen on Friday night.

Matoaca running back Cameron Johnson (1) registered 62 yards on seven carries in the Warriors’ victory over Glen Allen on Friday night.