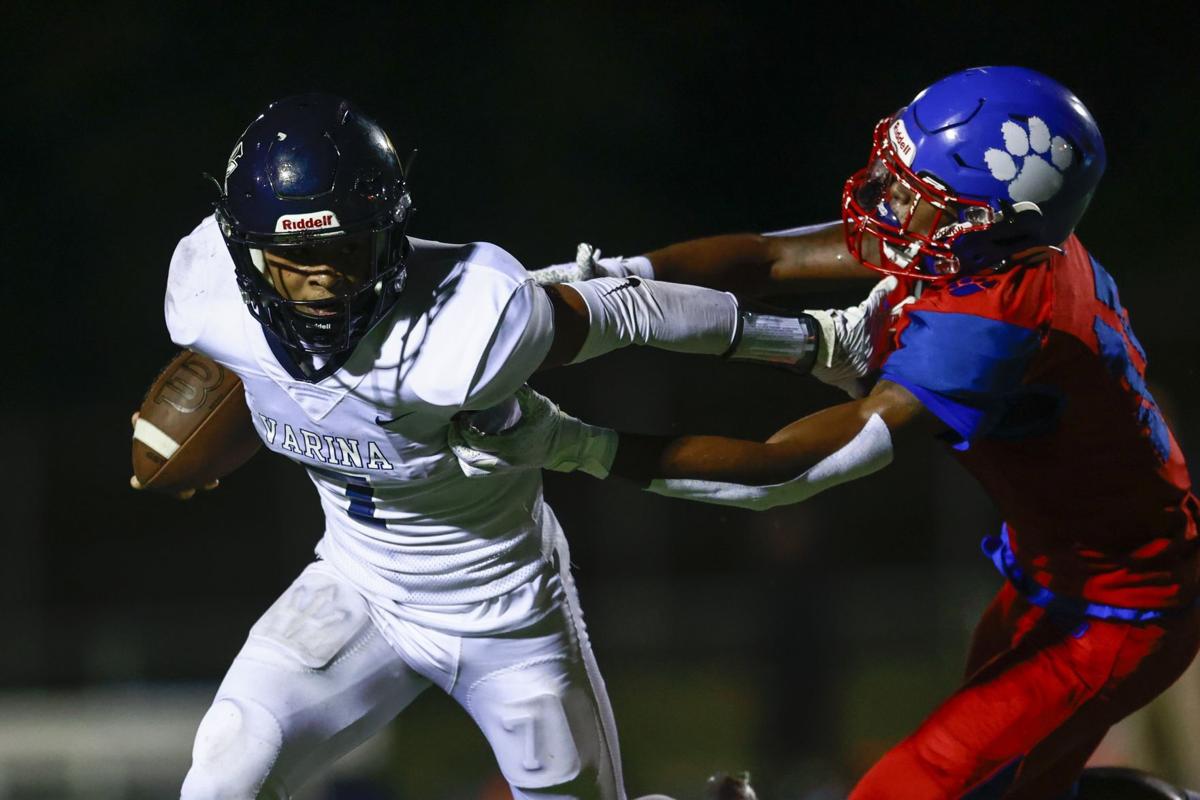 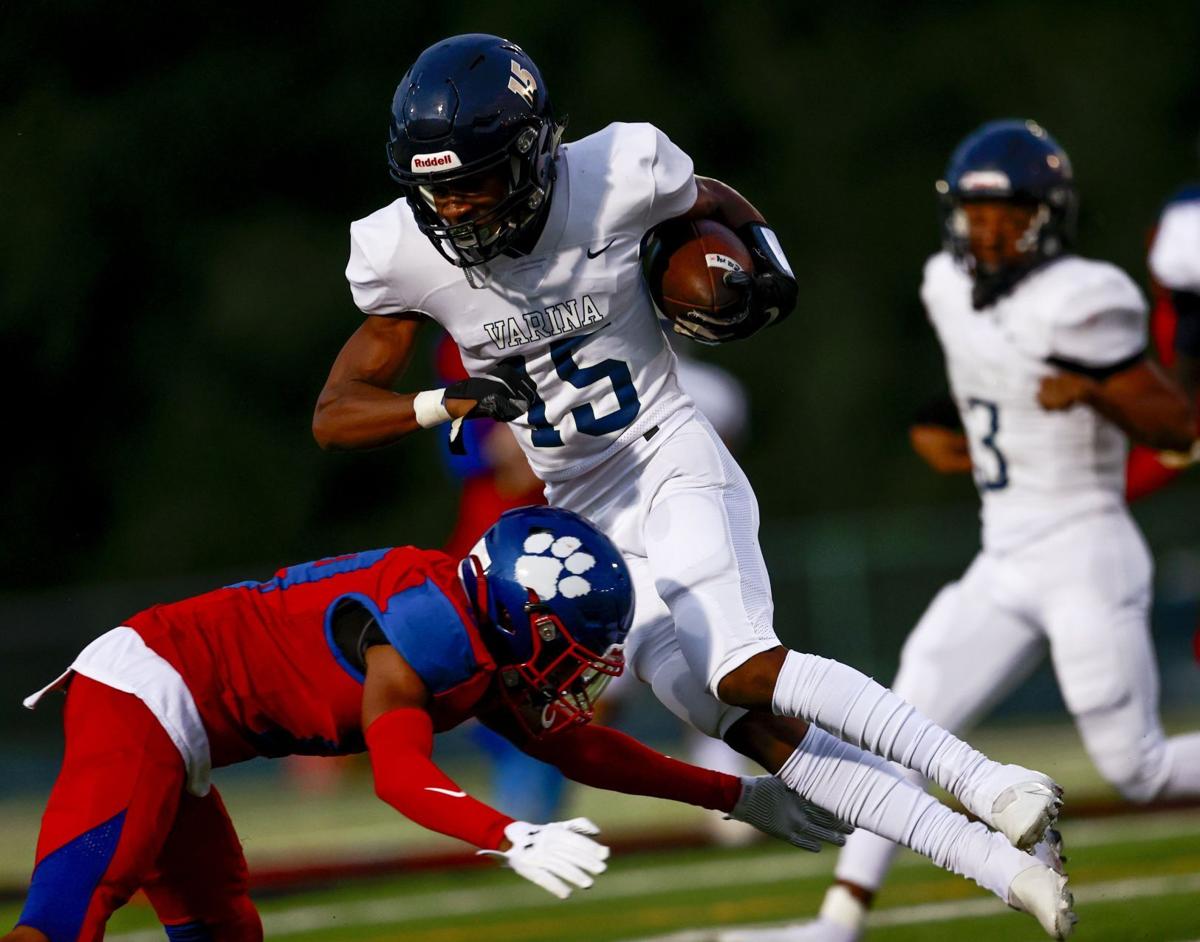 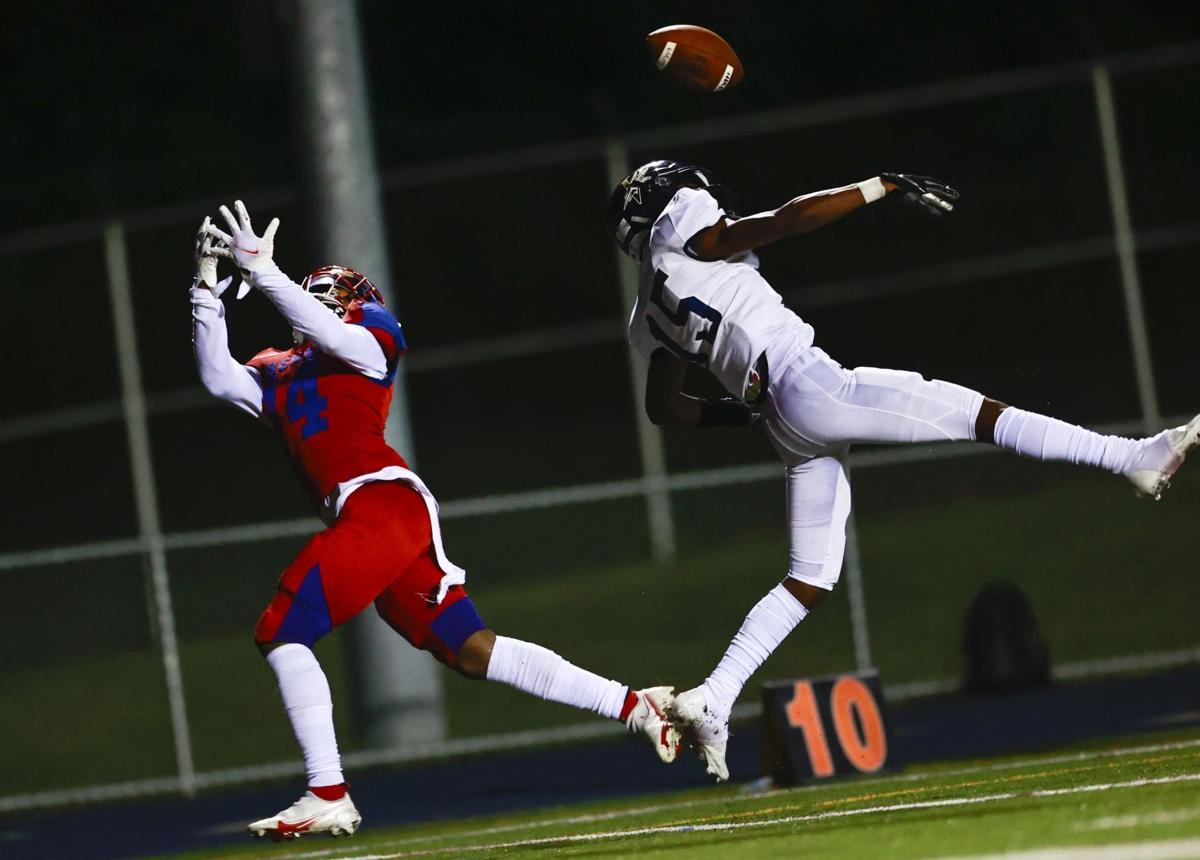 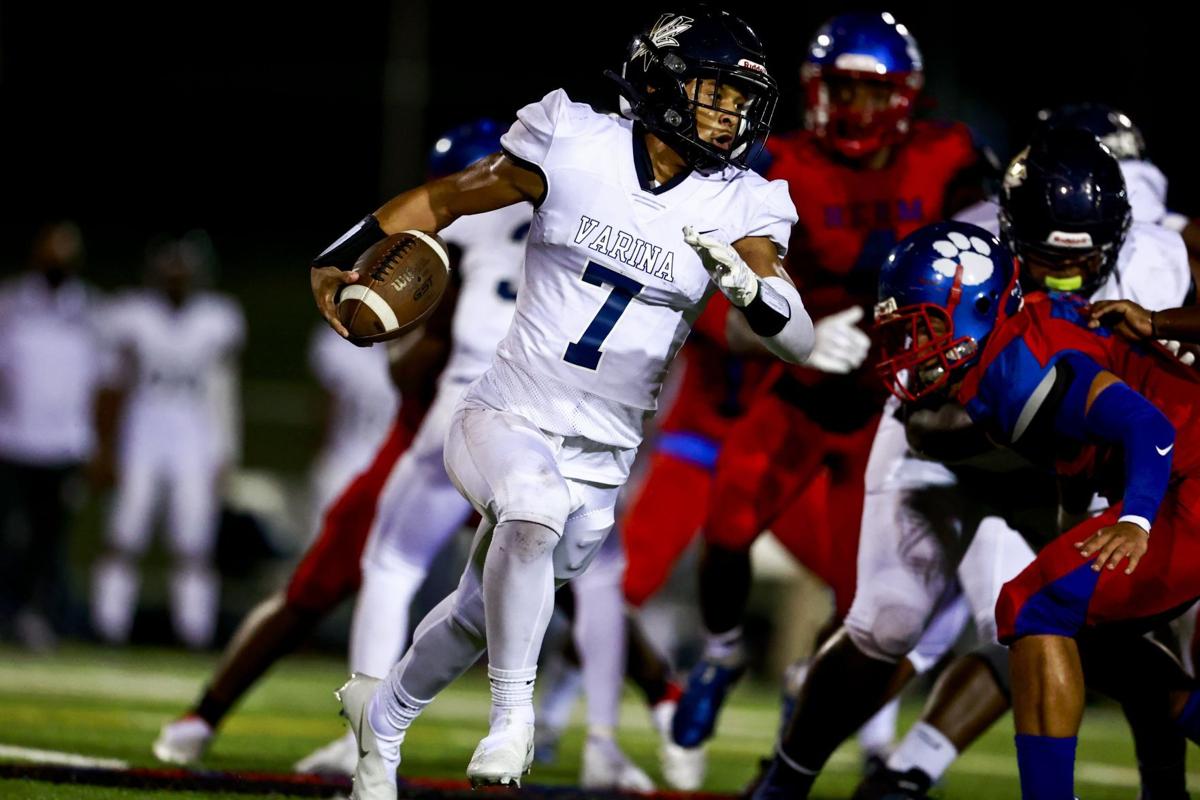 Varina’s Anthony Fisher looked for running room against Hermitage on Friday. The sixth-ranked Blue Devils controlled the ball for more than 11 minutes in the third quarter while opening a 21-7 lead. The fifth-ranked Panthers got within seven in the fourth quarter and had the ball with 1:50 remaining but couldn’t score.

That includes first-year special teams coordinator Justin Fitzgerald. And that trust paid off big time Friday night when Fitzgerald made a gutsy call to attempt an onside kick that keyed the decisive third quarter of the No. 6 Blue Devils’ 28-21 win over No. 5 Hermitage.

“I love what he brings to the table,” Lewis said of Fitzgerald. “I said, ‘Go ahead and do your thing coach.’ ”

Varina (2-0) recovered, allowing its bruising ground game, led by junior back Tae’mon Brown, to control the third quarter with more than 11 minutes of possession. Hermitage (1-1) led 7-6 at halftime, but by the time the Panthers got the ball after the break, they were down 21-7 with 57 seconds to play in the period.

In front of 2,500-plus at Hermitage’s Chester E. Fritz Stadium, Brown carried 26 times for 158 yards and a 6-yard touchdown that came on the first possession of that pivotal third quarter to cap off a 12-play drive.

“It was wide open, I’ve got to congratulate my line on that,” a breathless Brown said of the scoring play. “They kept on pushing today.”

Eight plays after the onside kick, Blue Devils quarterback Myles Derricott made another house call, this time on a 1-yard run.

At 5-foot-8, 170 pounds, Brown maneuvered his way betwixt would-be tacklers all night, spinning out of arms and high-stepping past the outstretched fingertips of diving defenders.

Lewis said in the third quarter one of his assistants was ready to pass more. But the Blue Devils’ linebacker-turned-head-coach wanted to “keep pounding.” Varina ran the ball on 18 of its 20 third-quarter offensive snaps and totaled 244 yards on the ground.

“We ride Tae’mon hard. He had a great night,” Lewis said. “They ain’t stopping it, we ain’t changing nothing. Big ups to our offensive line, running backs, wide receivers blocking.”

Varina fans traveled well for a storied matchup of two of the 804’s traditional powers. The schools first played in 1965, and the 34-game series has been highly competitive, with the Blue Devils’ win bringing the tally to 17-17.

“We knew it was going to be a fight,” Brown said of the intensity of meeting the Panthers.

Varina supporters chirped back and forth with the Hermitage sideline, fans on both sides yelled strongly-worded play-calling suggestions, home supporters rang cowbells and the Panthers’ drum line sent vibrations across the turf in an early-season playoff atmosphere.

Hermitage received the opening kickoff and set the tone out of the gate with a 10-play scoring drive featuring the 1-2 punch of quarterback Jaylen Burton and running back Jeremiah Coney. Burton punched it in on a 1-yard run. He finished 9 of 14 for 67 yards and rushed 12 times for 62 yards. Coney, who’s been offered by UVA, ran 16 times for 70 yards with a pair of touchdowns.

Varina responded emphatically on its first drive when Derricott lofted a pretty 35-yard touchdown to receiver Carlo Thompson. But both offenses cooled down, and that was it for the first-half scoring.

The back-to-back Varina touchdowns out of the break took the buzz out of the Hermitage supporters. But Burton, Coney and Co. weren’t going down without a fight. Coney scored from 4 yards to begin the fourth quarter. But it took the Blue Devils just three plays on the ensuing drive to respond on a 32-yard touchdown scamper down the right sideline by Curtis Green.

Coney found the end zone again from 18 yards out to make it a one-score game. And Hermitage got the ball back with 1:50 to go needing a touchdown to tie.

Varina quarterback Myles Derricott rushes for a touchdown during the No. 6 Blue Devils’ 28-21 win over No. 5 Hermitage Friday

Varina’s Anthony Fisher looked for running room against Hermitage on Friday. The sixth-ranked Blue Devils controlled the ball for more than 11 minutes in the third quarter while opening a 21-7 lead. The fifth-ranked Panthers got within seven in the fourth quarter and had the ball with 1:50 remaining but couldn’t score.