Cosby wrestling places second at 6A meet, advances five to states
0 comments
Share this
{{featured_button_text}}
1 of 3 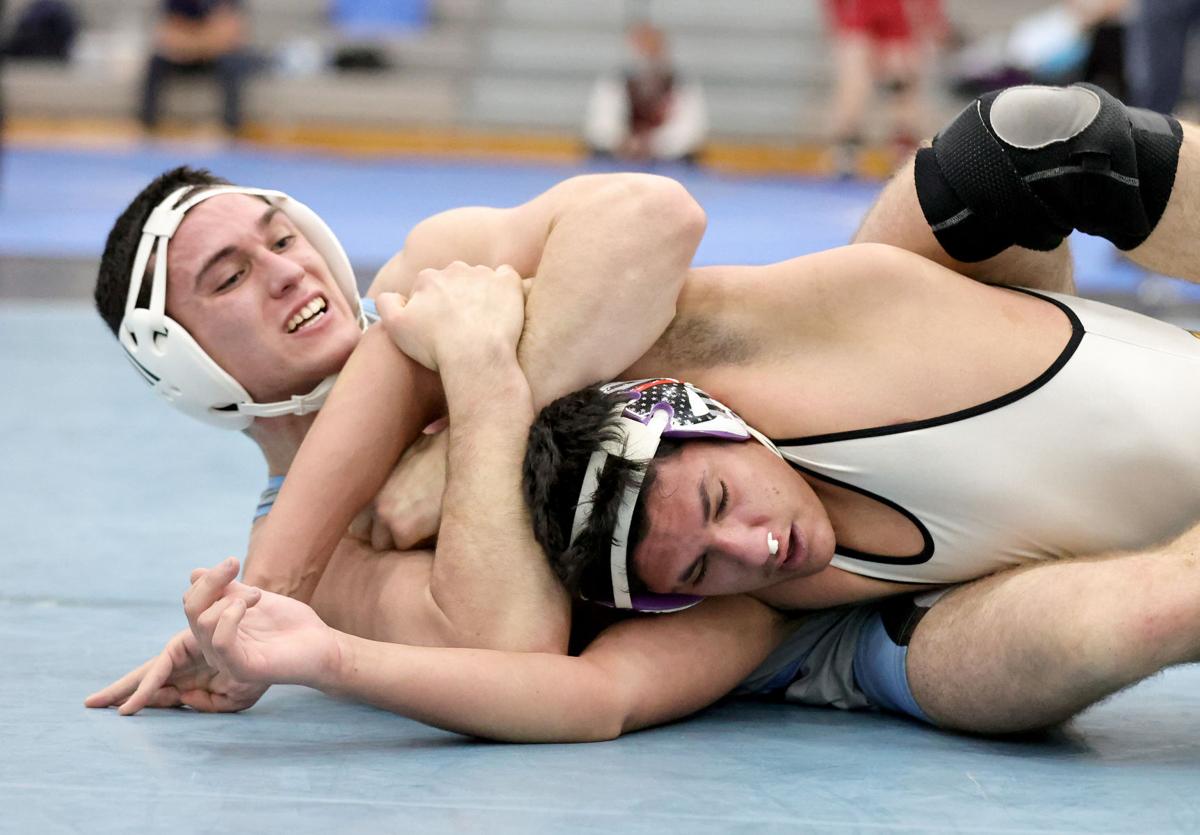 Cosby senior Paolo Luevano (left) dominated Kellam’s Beck Hoffman to win the 182-pound final 5-1. He was one of three Titans to win their weight classes Monday. 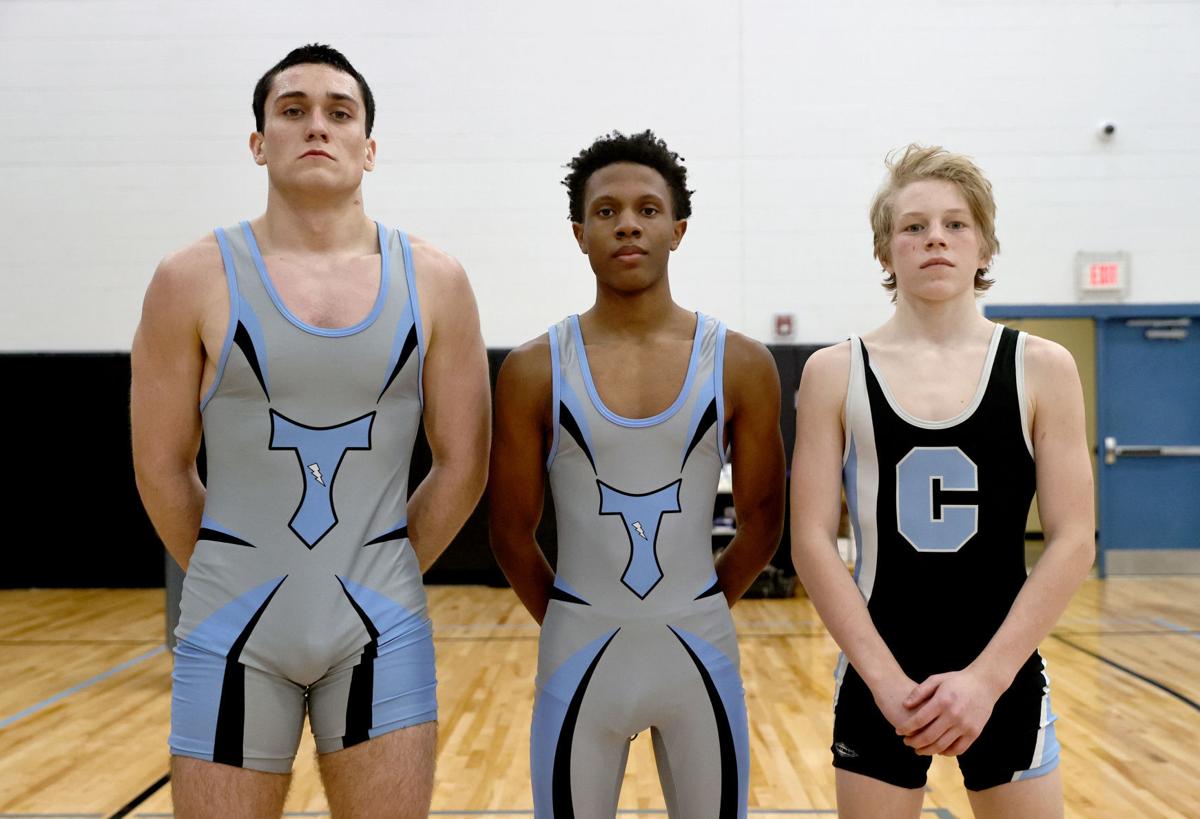 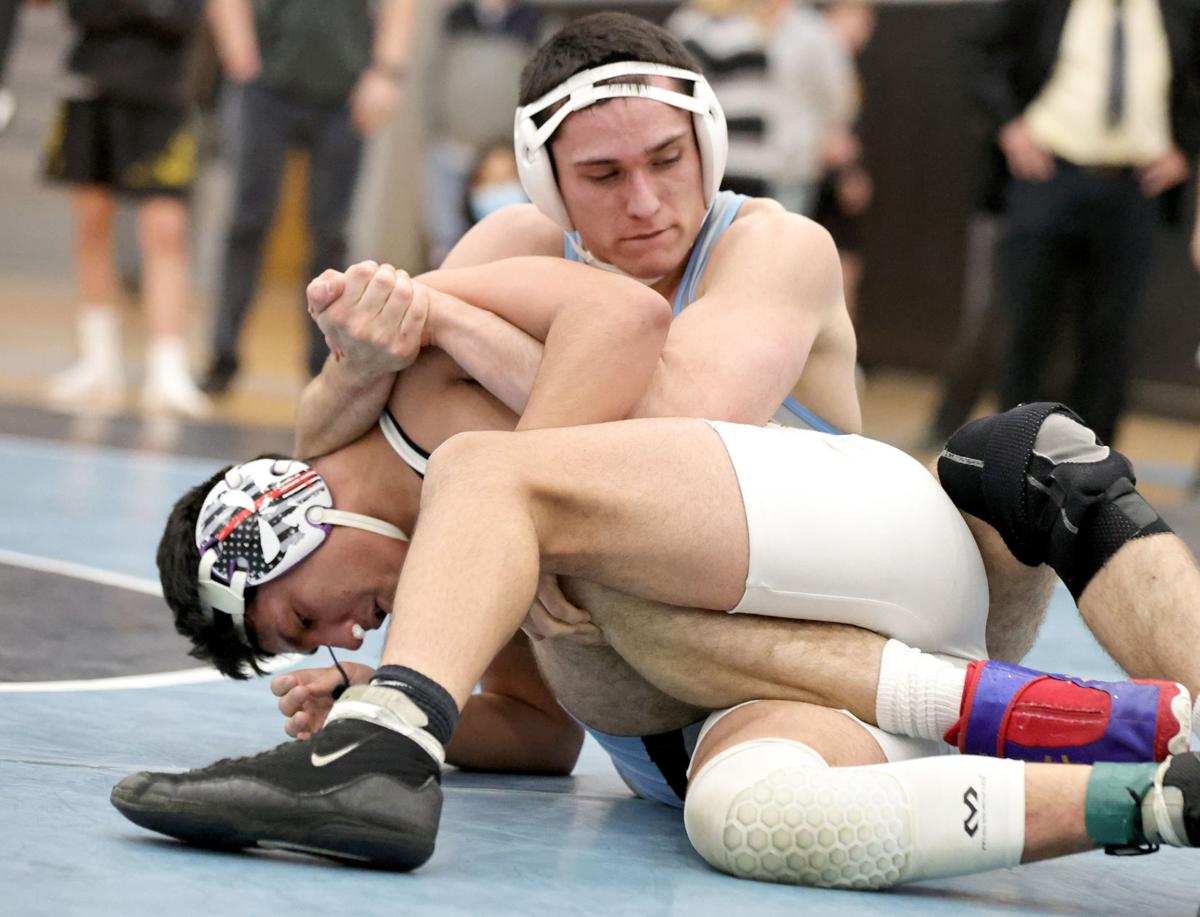 Cosby’s Paolo Luevano, top, and Kellam’s Beck Hoffman wrestle during the 182-pound final match of the 6A tournament at Cosby High School on Monday, Feb. 15, 2021. Luevano won the match 5-1.

The Cosby wrestling team placed second and advanced five wrestlers to the state tournament at Monday’s Class 6, Region A meet.

The first- and second-place finishers in each weight class advanced to the state tournament. But the Titans will take 11 competitors to Friday’s Class 6 meet — teams are also asked to bring their third- and fourth-place finishers from regionals as alternates.

Cramer, a freshman, pinned Ocean Lakes’ Nico Peeples in the 106-pound final in 58 seconds to move to 17-0 on the season.

“He’s had a heck of a year,” Cosby coach Mike Stefanko said. “He tore through this tournament. He’s a focused young kid for somebody so young.”

Cramer is “aggressive on his feet,” Stefanko said, and goes for takedowns without hesitation. In the regional final, Cramer got in Peeples’ legs early, took him down, put an armbar on him and flipped him over for the pin.

“For a freshman, he is very determined,” Stefanko said. “He’s somebody we’re hanging our hat on in the coming years. He will be the face of the Cosby program.”

Williams, a senior, took care of Kellam’s Jakob Brown in the 113-pound final even quicker than Cramer, securing a pin in 31 seconds. Williams began wrestling for Stefanko as an eighth-grader, and notched his 100th varsity win in his semifinal victory Monday.

Despite a consistently successful career, this is the first tournament Williams has won, Stefanko said.

“He’s worked hard the last five years, I couldn’t be happier for him,” Stefanko said. “Finishing runner-up so many times, you keep pulling for him, keep pulling for him. And his second-to-last tournament, he ends up pulling it out. Kids like that, in those types of endings, is what keeps me doing it. I enjoy seeing kids put in the work and being able to reap success.”

Luevano, another senior, came to Cosby as a junior about halfway through the year. He was stuck behind 2020 All-Metro wrestler of the year Simeone Holmes in his weight class, so Luevano didn’t get an immediate chance to shine.

“But he got a shot this year, and he’s done very well,” Stefanko said of Luevano, who won the 182-pound final by 5-1 decision over Kellam’s Beck Hoffman. “Just a workman like effort, he gets the takedown and when he gets on top of somebody, he can ride ‘em out the entire period.”

That strategy is what propelled Luevano to a regional title Monday, Stefanko said. He built an early lead, then rode on top the rest of the way to keep Hoffman from recovering points.

At 170 pounds, Zach Keefe won a true second-place match to earn a spot in states. Keefe won the third-place match in a quick 15-second pin, then beat the loser of the title match with another pin in 1:43.

At 195 pounds, Cole Giegling followed the same route to a state berth. He pinned the loser of the title match in 35 seconds to take true second place.

For Thomas Dale, Jacob Tatum finished second at 160 pounds, as did Zack Tirpak at 120. Drew Fink came in third at 113; Jonluke Spitzer placed fourth at 152; and James Fink finished fourth at 126.

For James River, Jaden Sarprong placed fourth at 220 pounds, and Steven Braga came in fourth at 170.

Stefanko said the end of this season brings with it a unique sense of gratitude — and a much welcome deep breath after the most turbulent of campaigns.

“This year with sports, it has been a roller coaster,” Stefanko said. “Every day, you walk in the building, you don’t know whether your program is going to be canceled for the year, who might be quarantined. It’s been an up and down year. If I didn’t have white hair already, this year would have definitely started the process. I’m glad that we were able to get a season in, especially for those seniors.”

Note: The Virginia High School League postponed Thursday’s Class 5 and Class 3 state wrestling tournaments, and the Class 5 and Class 1-2 state swimming meets, because of impending weather. Makeup dates are to be determined.

The Class 5 wrestling tournament is scheduled for the Virginia Beach Sports Center. The Class 3 event is at Salem Civic Center.

After long wait, Monacan in control in victory over No. 2 Manchester

Only one Dominion District football team had beaten Manchester in the past four seasons.

Saint Gertrude earned its first state championship since 1975 with a 56-36 victory over Catholic in the VISAA Division I invitational Friday.

Cosby senior Paolo Luevano (left) dominated Kellam’s Beck Hoffman to win the 182-pound final 5-1. He was one of three Titans to win their weight classes Monday.

Cosby’s Paolo Luevano, top, and Kellam’s Beck Hoffman wrestle during the 182-pound final match of the 6A tournament at Cosby High School on Monday, Feb. 15, 2021. Luevano won the match 5-1.