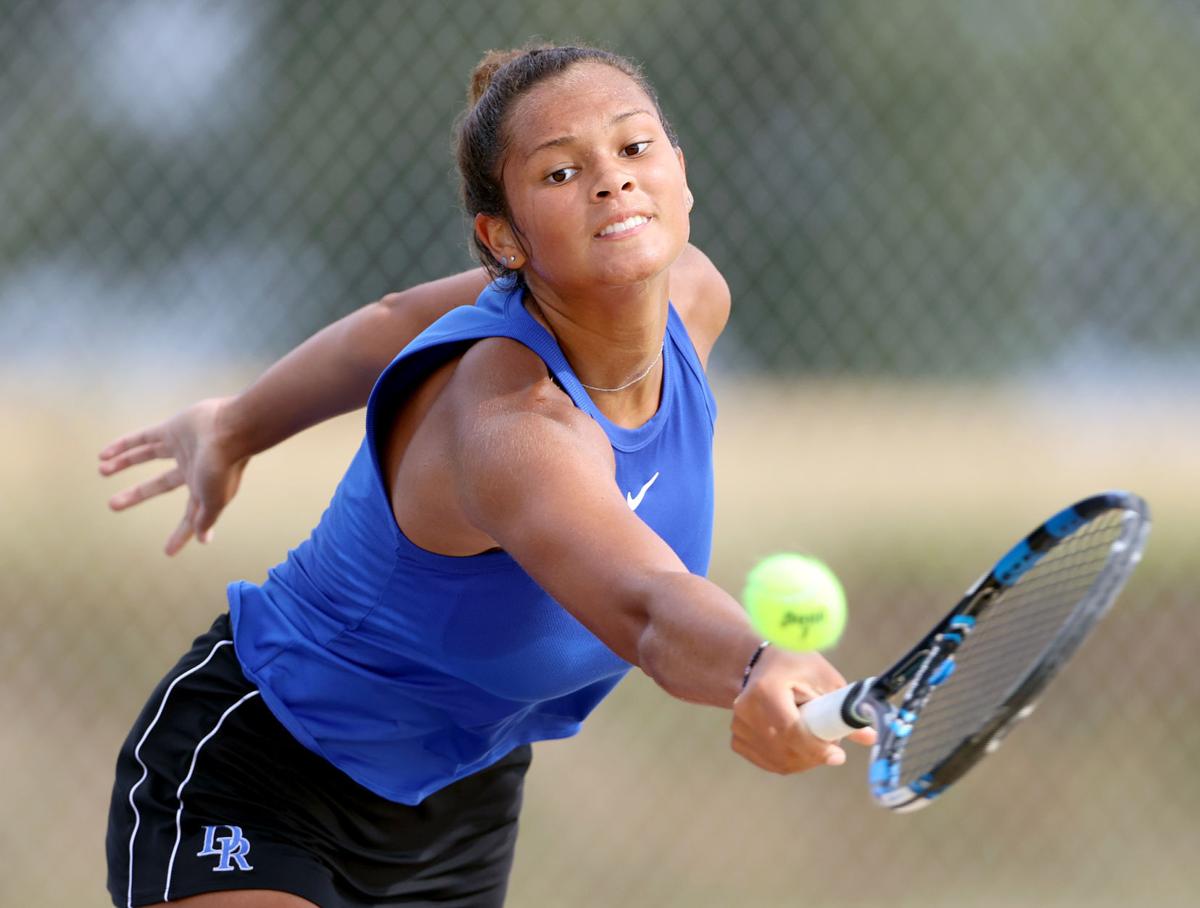 Deep Run’s Olivia Wright reaches for a backhand shot during her Class 5, Region B singles final against Clover Hill’s Sia Chaudry in Varina. Wright defeated Chaudry for the region singles title and won in doubles with teammate Rosalyn Kara. 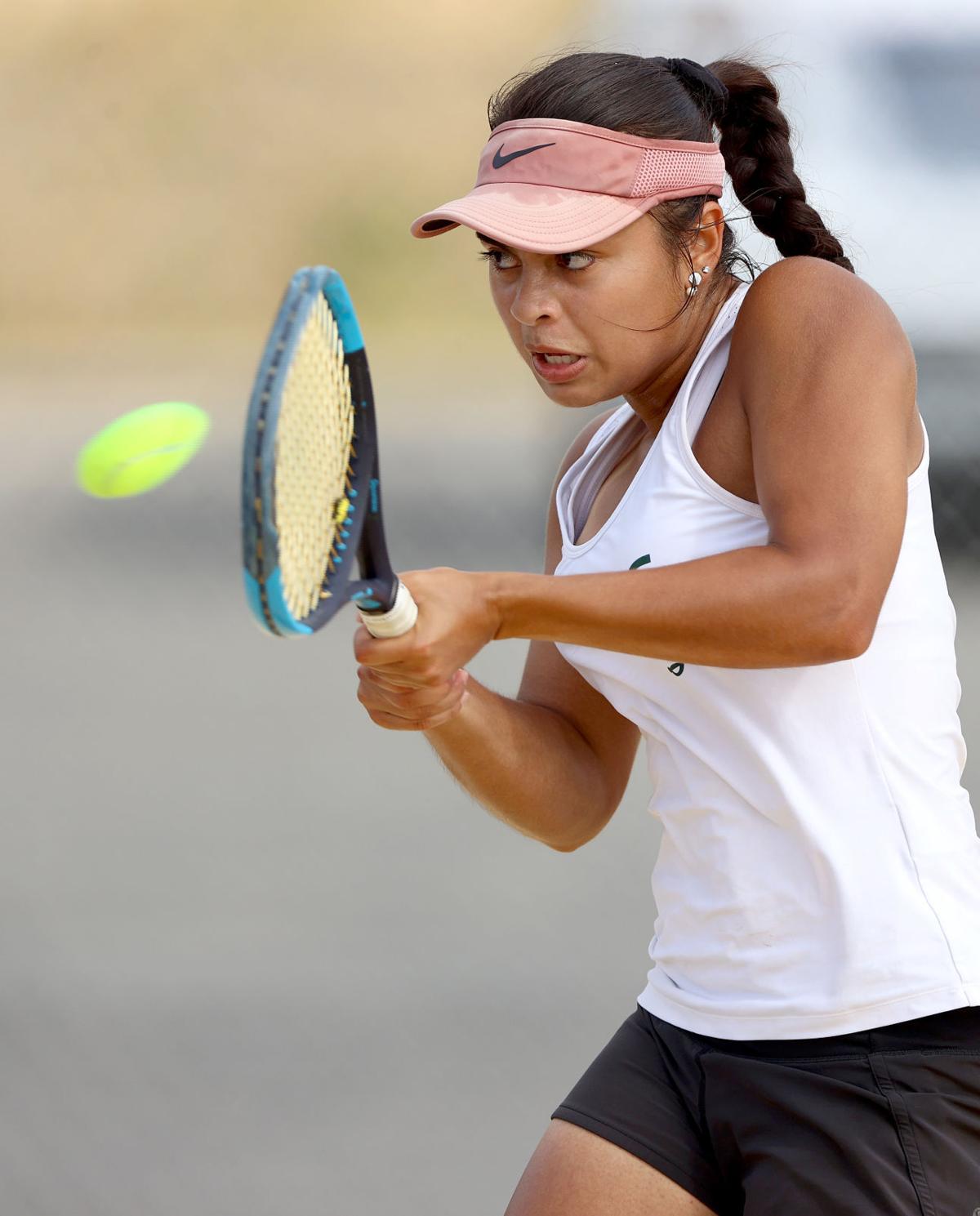 Clover Hill’s Sia Chaudry returns a shot to Deep Run’s Olivia Wright during the Region 5B final. It was Chaudry’s second match of the day after her semifinal that morning.

Deep Run asserted its authority by claiming three more region championships, but Glen Allen freshman Ryan Good interrupted a Wildcats sweep with a title of his own at the Class 5, Region B singles and doubles tennis tournaments on Thursday.

Good claimed the boys singles championship for the Jaguars, while the Wildcats took girls singles and doubles, as well as boys doubles.

The two are close friends who often play as doubles partners during USTA tournaments, which Wright said added an extra dynamic.

“It’s always really hard to play someone you know so well and who you’ve played so many times before,” Wright said. “I knew what I had to do, and I’m really happy that I was able to stick to my game plan all the way through.”

Potential thunderstorms pushed the fight for the title to Thursday morning. Chaudry, a junior ranked 58th nationally and first in the state, was forced to conclude her semifinal match against Atlee’s Lizzy Hughes the morning of.

Chaudry played a steady game, but Wright’s strong serves and offense-forward play kept the final score in her favor.

After falling in last week’s regional as a team — the Deep Run boys and Freeman girls eventually came out on top in that tournament — Wright and the Wildcats girls were happy with this rebound performance.

“Since we didn’t win team, it was really fun to be able to win this,” Wright said. “Overall, I’m really happy with how the season has gone so far. We weren’t sure we were even going to have a season, so just that was exciting.”

Across town at Raintree Swim & Racquet Club, the boys battled it out for their own championships.

Good faced off against Deep Run’s Aden Bashir in a tight singles match, with both games ending with a 7-6 tiebreak.

While it initially took some pressure from his parents for Good to join the Glen Allen team, the freshman said he’s glad he made the commitment.

“I mostly just wanted to come out and train, but my parents really wanted me to play, and I’m so glad I did,” Good said.

“All the people, my coaches are so awesome and it’s been so much fun. I’m so excited.”

On the other side of the court, Bashir was battling cramps through much of the second game.

“I didn’t get to execute everything I wanted, but that’s tennis,” Good said. “I was lucky, and by the end I was able to move him around a bit and it worked, thankfully.”

The Class 5 state tournament is slated for June 10-12.

Deep Run’s Olivia Wright reaches for a backhand shot during her Class 5, Region B singles final against Clover Hill’s Sia Chaudry in Varina. Wright defeated Chaudry for the region singles title and won in doubles with teammate Rosalyn Kara.

Clover Hill’s Sia Chaudry returns a shot to Deep Run’s Olivia Wright during the Region 5B final. It was Chaudry’s second match of the day after her semifinal that morning.