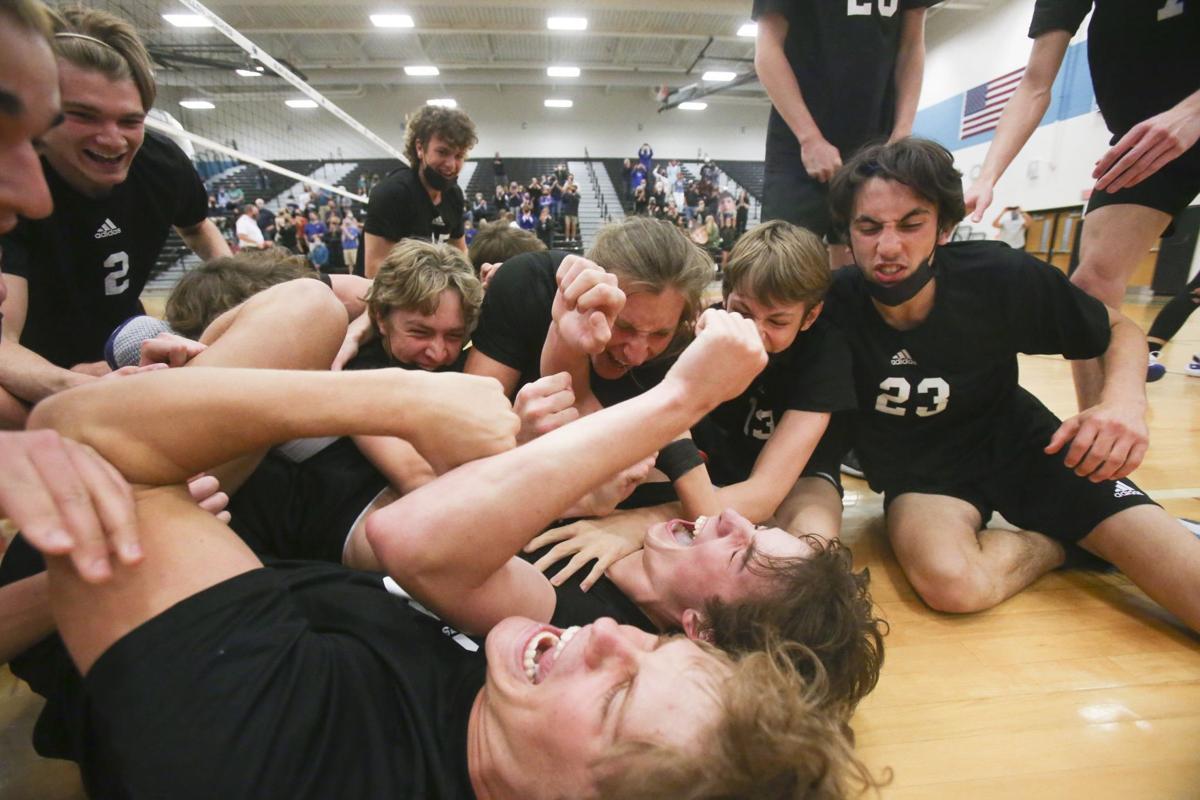 Deep Run players dogpile in celebration after defeating Glen Allen in three sets for the Class 5 boys volleyball championship at Glen Allen High School. The Wildcats lost just one match throughout their atypical spring season — the Class 5, Region B final against the Jaguars. 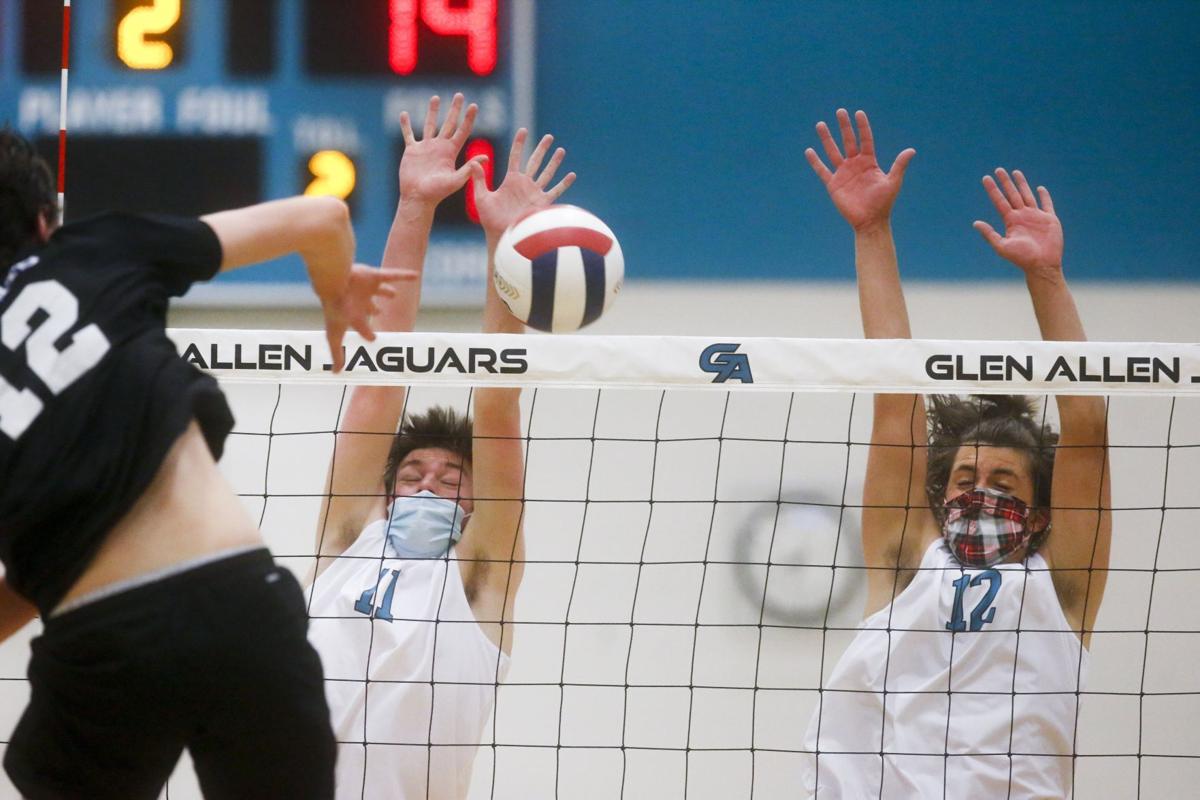 Deep Run’s Ian Wagenhauser (left) spikes the ball as Glen Allen’s Wyatt Hampton (center) and Carson Elliott attempt to block the kill attempt during the Class 5 final. Wagenhauser had 12 kills in the victory. 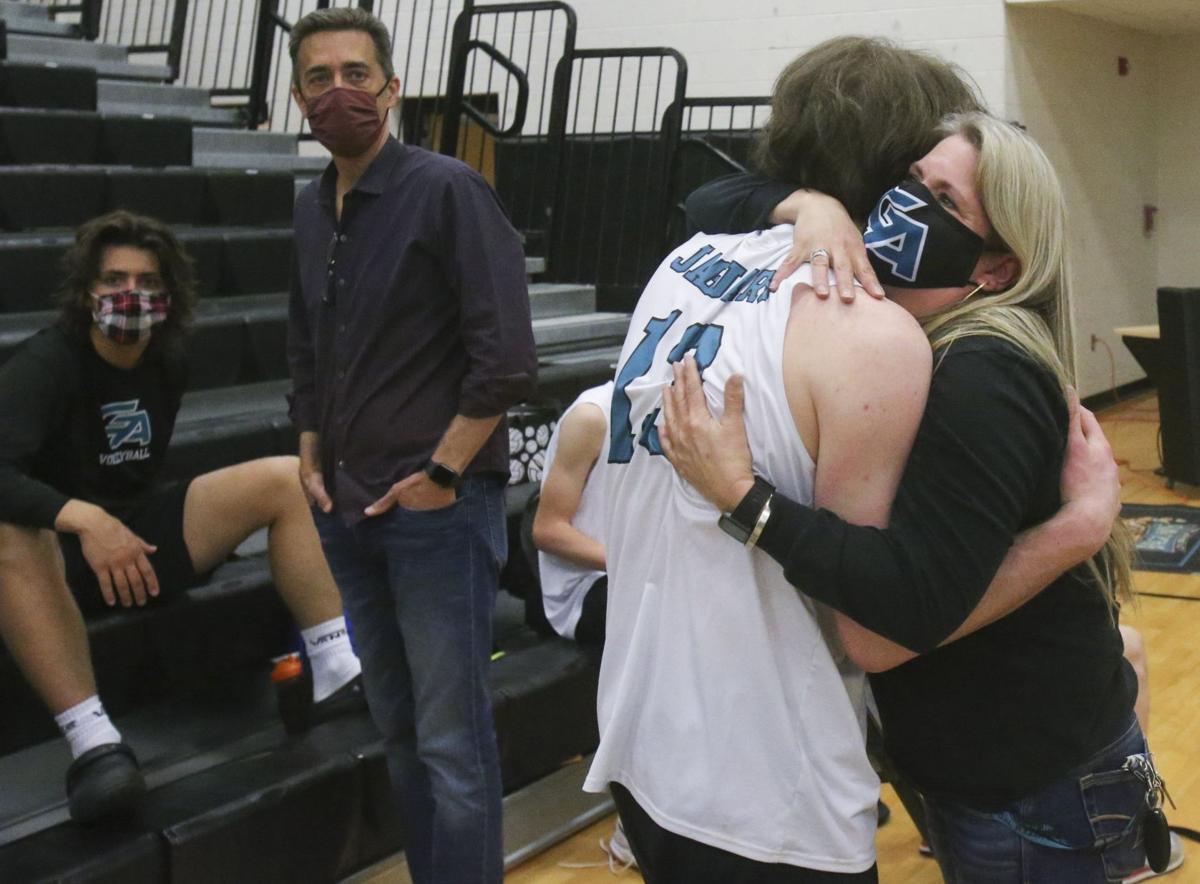 Ian Wagenhauser ducked out of an interview for a few moments and eased his 6-foot-6 frame into Deep Run’s team picture with the Virginia High School League Class 5 boys state championship volleyball trophy.

Four fingers went up from everybody in the group, signifying the Wildcats’ fourth consecutive state title.

Wagenhauser was part of last year’s team as a sophomore, but he didn’t play as much. So the outside hitter with the big swing and hard serve considers Friday’s 25-20, 25-16, 25-21 victory over Glen Allen in the title game the first crown in which he’s had a major part.

Senior setter Wade Every said he “probably started about half the games last year, just due to the play of our backup lineup. We had a very impressive second team last year and we started a lot of games. That helped me a lot.

“This year means so much more to me because I know how much effort and how hard all of us have worked. … This is what we’ve been working for the last few years.”

The title game between Deep Run and Glen Allen has become a rite usually of winter and now of spring. The teams battled for the previous two state titles. With the pandemic delaying the season until the spring this year, they went at it again at Glen Allen.

This was their fourth meeting this season. Deep Run (16-1) won the two regular-season matches (3-1, 3-2), but Glen Allen planted some uncertainty by winning the Region B title game 3-1. That snapped the Wildcats’ 39-match winning streak.

“I think the loss really helped us,” Every said. “This week we just came in ready to fight, like underdogs. It’s not something we’re used to.”

Deep Run jumped to a 7-0 lead in the first game. Glen Allen recovered to take a 15-12 lead, but the Wildcats wrapped up the first set with a 9-2 run.

Deep Run opened a 14-7 advantage in the second game, then finished with an 8-3 spurt. Ahead 17-16 in the third game, the Wildcats got some separation, and Wagenhauser finished the match with a kill.

“I felt like last game we were all in our heads and really weren’t mixing well,” Wagenhauser said. “I feel like this game we really connected. I feel like we just played our best volleyball all year today.”

Deep Run coach Kevin Pond said his club served better as well. The Wildcats got in 81.1% of their serves.

“He’s definitely a D-I type of talent,” Pond said. “If he keeps developing muscle-wise and gets stronger, he’s just going to be unstoppable next year.”

Every had 34 assists and one ace. Tyler Gray had eight kills and eight digs, and Hunter Baldwin had six kills.

Brooks Cowart and Sam Kinter each had eight kills for Glen Allen.

The Jaguars finished 13-3, with the only losses to Deep Run.

“We just didn’t have our A game tonight unfortunately,” Glen Allen coach Kevin Hoy said. “It just wasn’t our night. They got their momentum going, and they were tough to stop. We knew it was about trying to keep their momentum down, and we just weren’t able to do that.”

Deep Run players dogpile in celebration after defeating Glen Allen in three sets for the Class 5 boys volleyball championship at Glen Allen High School. The Wildcats lost just one match throughout their atypical spring season — the Class 5, Region B final against the Jaguars.

Deep Run’s Ian Wagenhauser (left) spikes the ball as Glen Allen’s Wyatt Hampton (center) and Carson Elliott attempt to block the kill attempt during the Class 5 final. Wagenhauser had 12 kills in the victory.