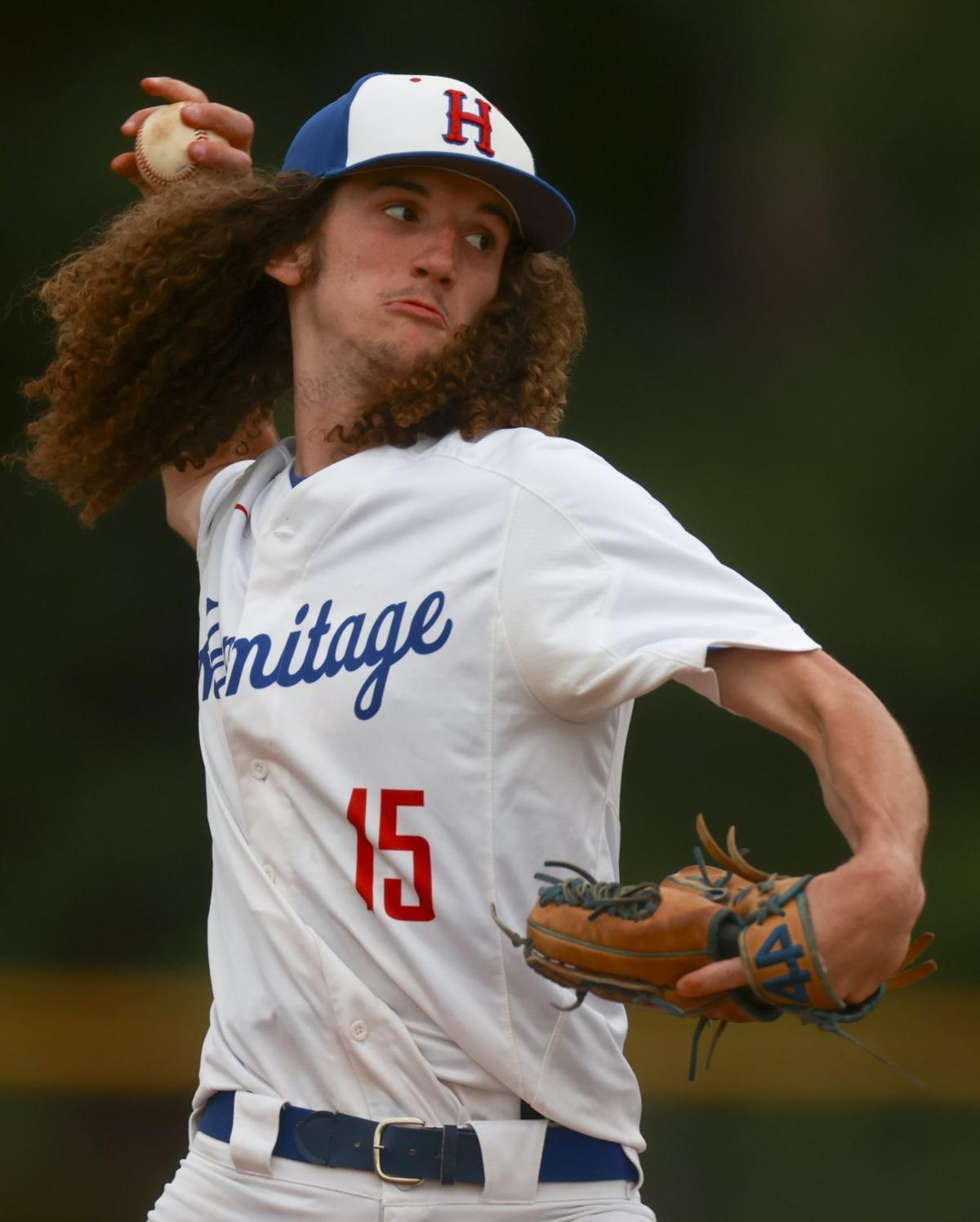 Hermitage pitcher Zack Easton has learned to throw from both sides of the mound, a rarity for pitchers at any level. He’s a natural righty, but he learned how to use his left hand comfortably after an injury when he was young. He’s since translated the skill to the diamond. 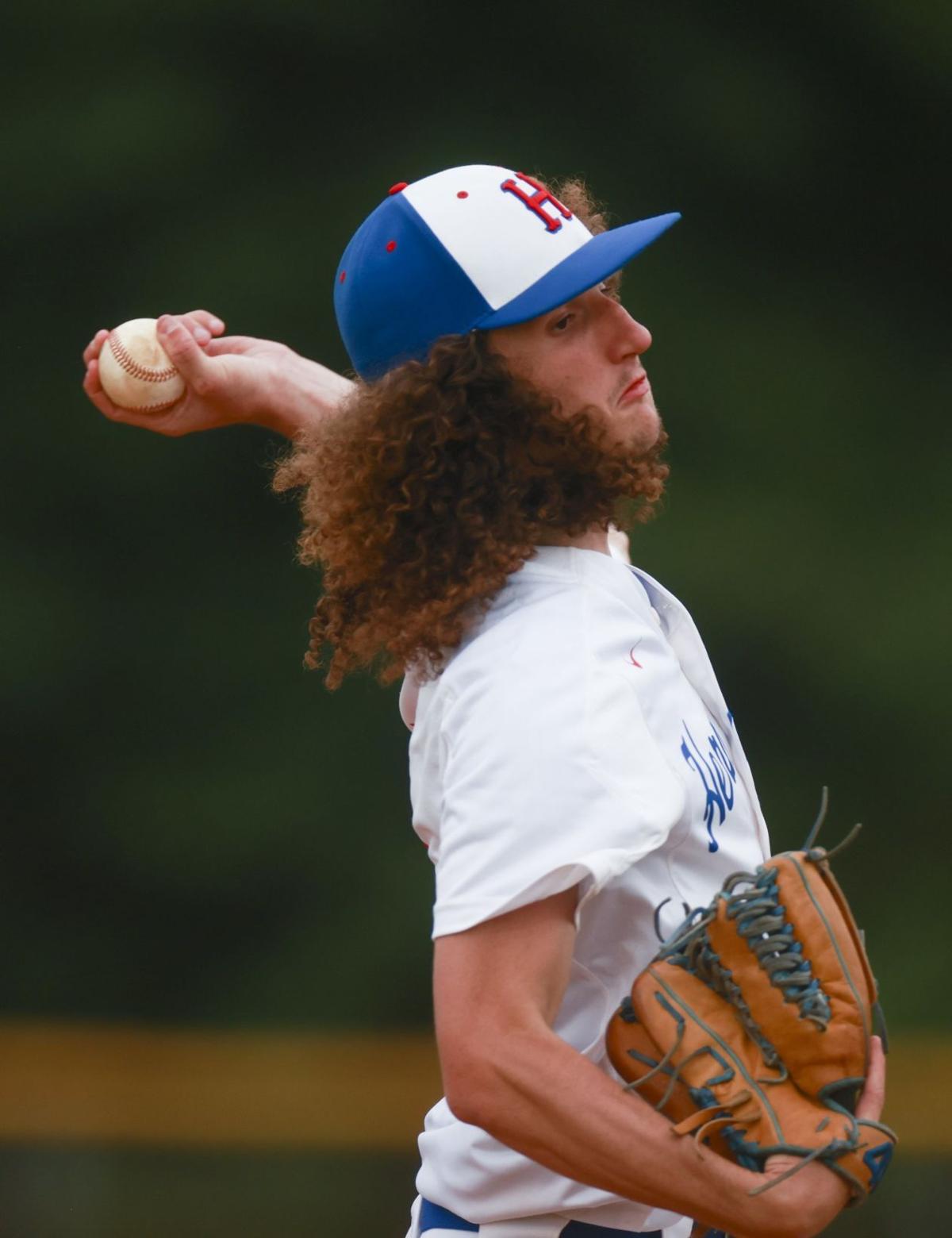 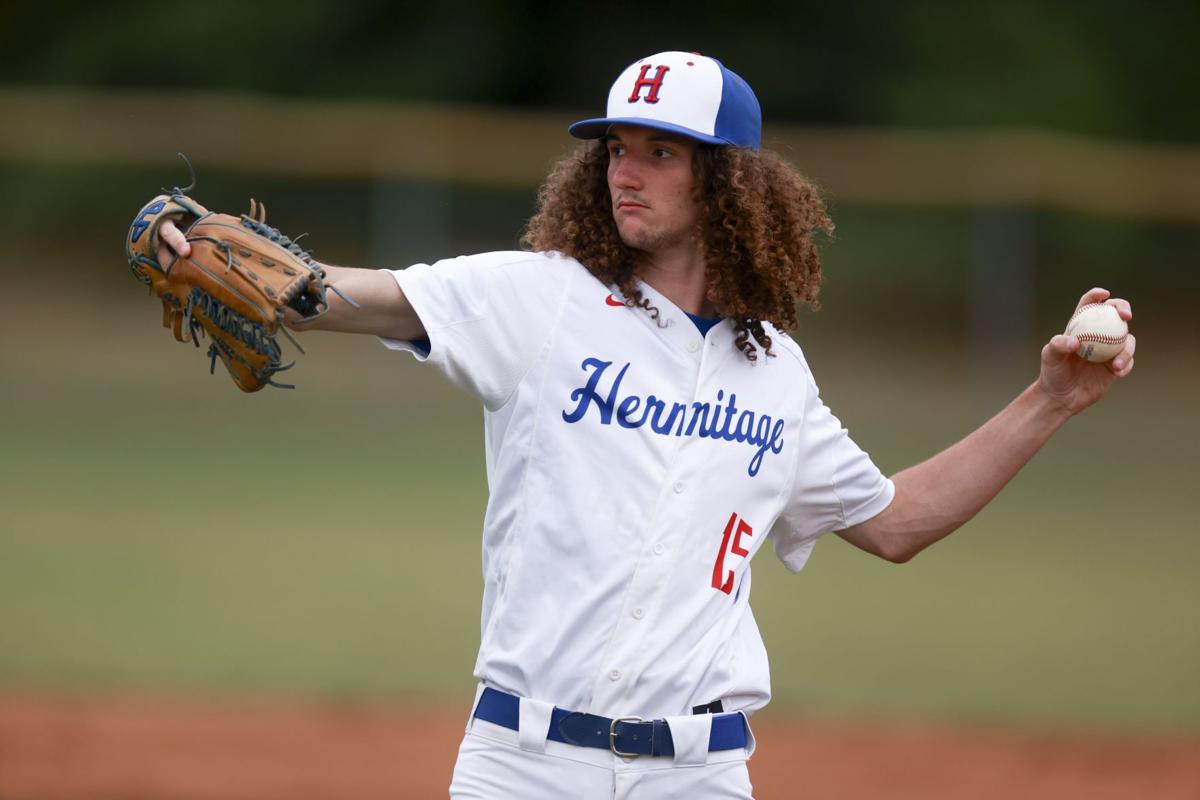 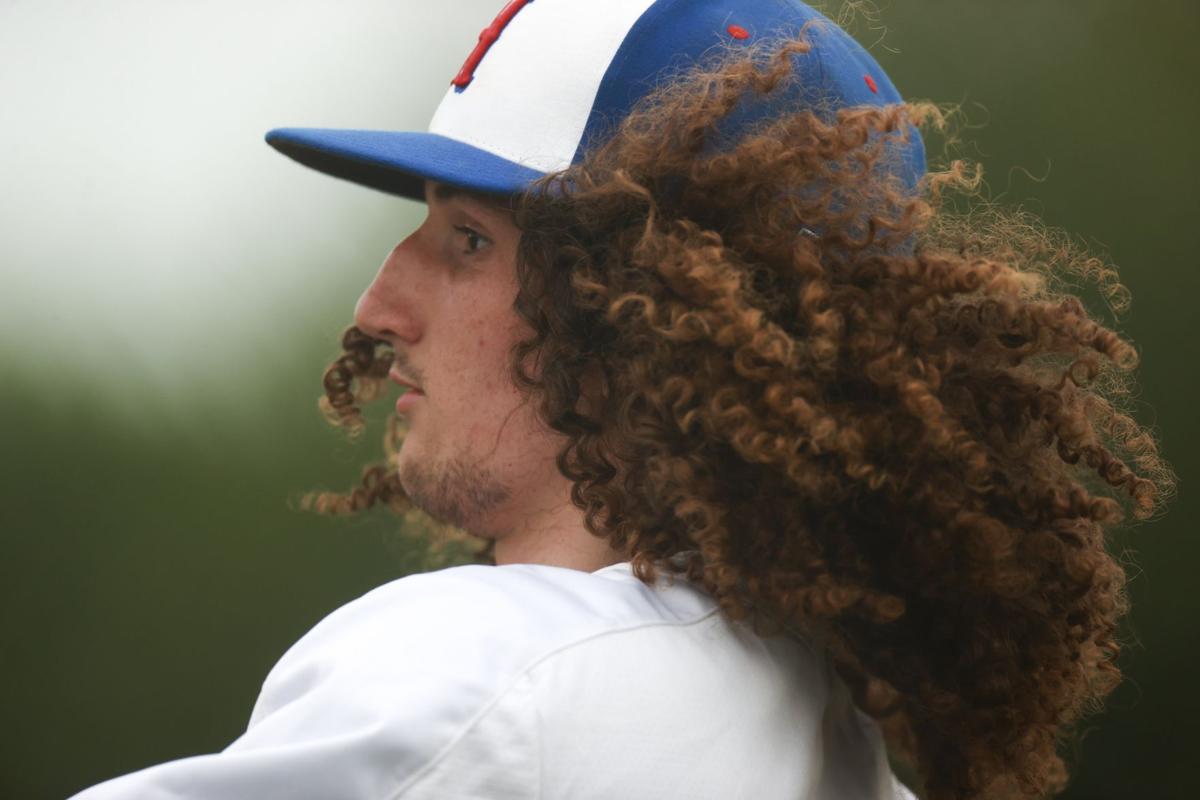 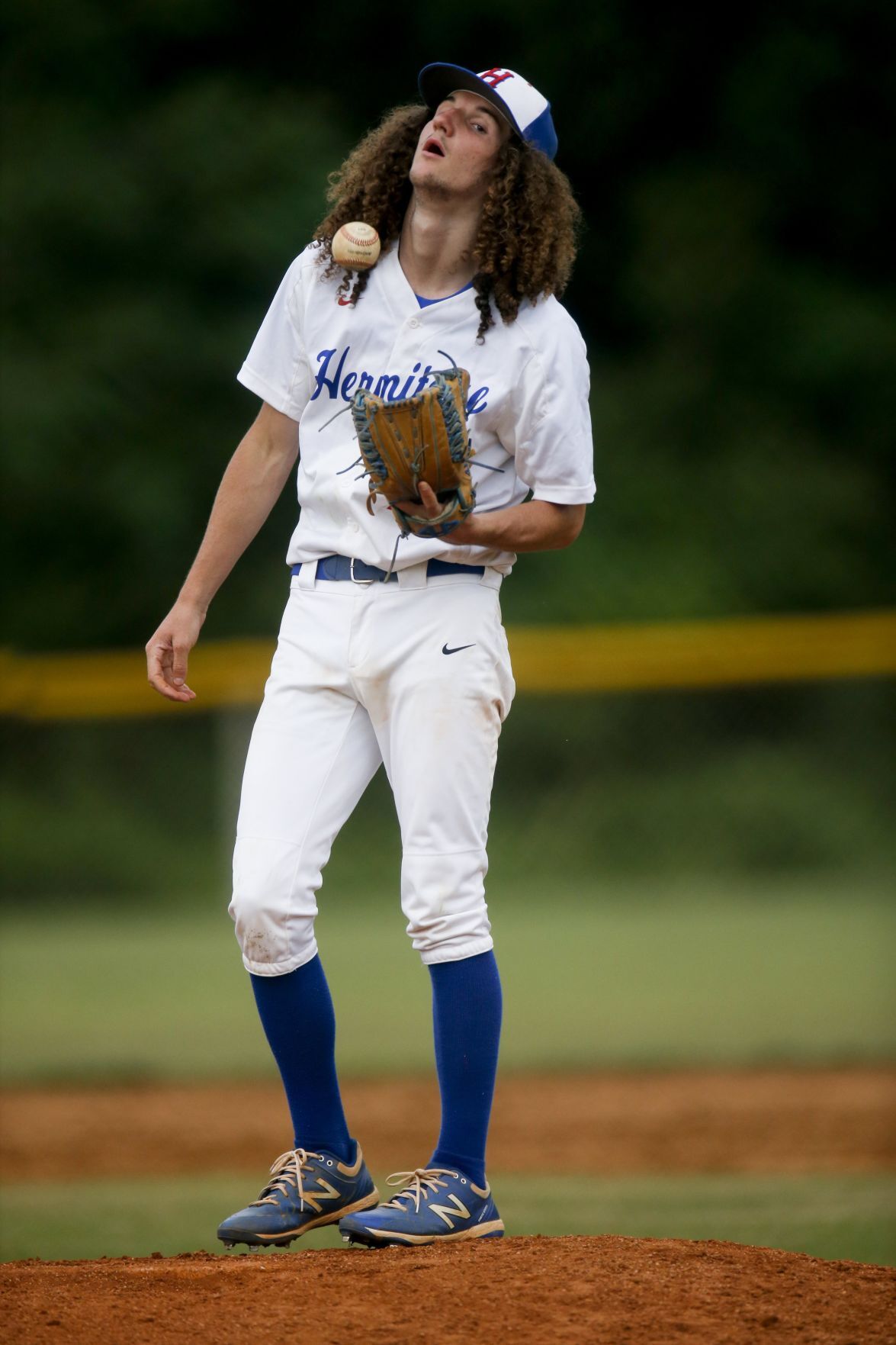 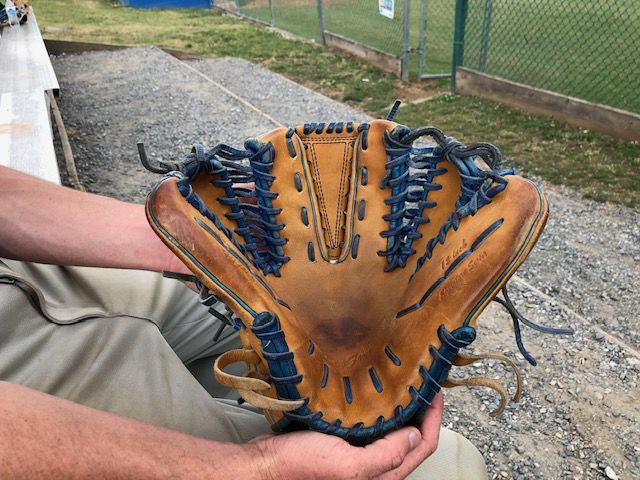 Easton uses a six-finger glove that allows him to freely switch between hands. The funky mitt was custom made by 44 Pro Gloves.

It wasn’t just for show.

Easton did things left and right against Douglas Freeman. The 6-foot-1, 155-pounder with the long, curly hair has worked on switch pitching since middle school. While he did it occasionally in previous seasons at Hermitage, he’s developed the ambidexterity into something he’s used frequently this season.

He’s still learning and improving, he said, with a low-80s fastball right-handed, a high-70s fastball left-handed and a variety of pitches from both sides. His numbers don’t jump out — 1-2 with one save, 20 earned runs and 18 walks in 29 2/3 innings — but he has generated 40 strikeouts and plenty of double-takes.

“You don’t walk on to a baseball field thinking you’re going to see someone throw right- and left-handed,” Hermitage coach B.J. Harlow said.

Easton is naturally right-handed. He broke his right hand in third grade, started doing everything left-handed, and found out it felt natural.

He didn’t really start putting it to use with baseball until the seventh grade. At a middle school practice, he picked up a left-hander’s glove, starting throwing, then went and bought a glove.

The first time he pitched from both sides in a game was during a scrimmage his eighth-grade year.

Easton pitched lefty once during his freshman year on JV at Hermitage. He hit the batter with his first pitch and stopped. He said he probably did it about 10-15% of the time as a sophomore on varsity.

He planned to do it all the time last spring, but teams didn’t play because of the pandemic. He’s been a lefty about 40% of the time this season.

“My left arm [isn’t as accurate],” said Easton, who throws an equal amount with each arm during bullpen sessions. “But I can’t throw a football with my right arm to save my life. Maybe I can throw it 10 yards, but it’s wobbly.”

While lefty-lefty and righty-righty matchups are more advantageous for professional pitchers, Easton usually switches to mix things up.

Sometimes he switches because a batter got a hit in his previous at-bat, or he wants to give him a different look after an earlier at-bat, or he thinks a certain pitch will work better. Sometimes he’ll switch to lefty to hold a runner closer to first base.

He’ll also go against the preferred matchup, pitching lefty against a righty and vice-versa, something he did several times against Freeman.

“Sometimes my right arm will be like I don’t want to throw that much today, so I’ll switch to lefty and my left arm feels really good. So I’ll just stay lefty most of the time,” he said.

There are times, he said with a laugh, that “I get confused on which arm to use.”

His arm slot is more over the top right-handed. His left-handed delivery drops down near two-thirds.

He locates his fastball better than his offspeed pitches from the right, he said, but the opposite is true from the left.

“He’s got a lot of strikeouts,” Harlow said. “He does struggle a little bit with getting behind in the count. We’re working on that.”

His six-finger mitt was custom made by 44 Pro Gloves. There’s a small pocket in the middle, with stringing between the other four fingers.

In the first game of the season, Easton said a hitter stepped in and “I just stepped off [the mound] and flipped the glove, and he was like, did he really just do that?”

Easton has studied Pat Venditte, an ambidextrous pitcher who was in the big leagues with Oakland, Toronto, Seattle, the Los Angeles Dodgers, San Francisco and Miami from 2015-2020.

Venditte’s comical encounter with a switch-hitter who wanted to swap prompted baseball to institute a rule that basically says a pitcher has to indicate which hand he’ll use throughout the at-bat, and then the batter gets the last choice of the side from which he’ll hit.

That applies to high school pitchers under National Federation of State High School Associations rules. Easton said he remembers facing a switch-hitter only once.

Also applicable is the Virginia High School League maximum of 110 pitches in a day. That’s total from both sides. Easton can’t throw 110 pitches as a righty and 110 as a lefty.

Easton, whom Harlow calls “the definition of a utility baseball player” — he can catch as well — is planning to play at Paul D. Camp Community College in Franklin next season. He’d eventually like to transfer to a four-year college and see what happens from there.

“It’s really fun to watch,” Harlow said. “To see him with a lefty come up, and then switch over to the left …

Hermitage pitcher Zack Easton has learned to throw from both sides of the mound, a rarity for pitchers at any level. He’s a natural righty, but he learned how to use his left hand comfortably after an injury when he was young. He’s since translated the skill to the diamond.

Easton uses a six-finger glove that allows him to freely switch between hands. The funky mitt was custom made by 44 Pro Gloves.