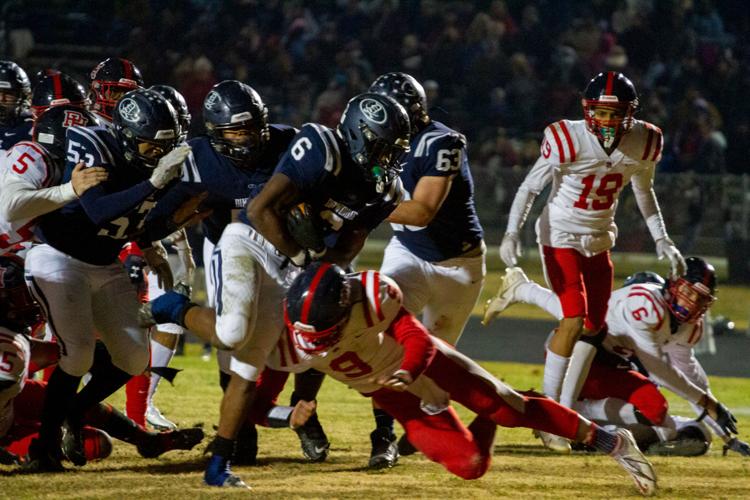 DINWIDDIE, Va. — Patrick Henry's Jordan Allen (9) cuts down Dinwiddie quarterback Harry Dalton (6) in the Patriots' 35-20 victory over the host Generals in a Region 4B semifinal on Friday, Nov. 19, 2021. 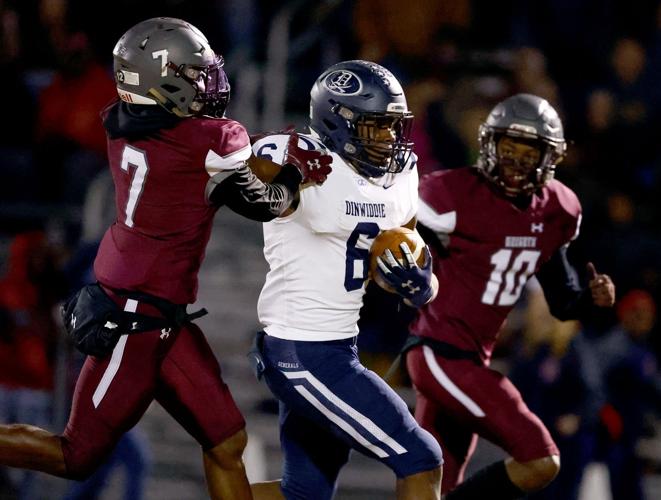 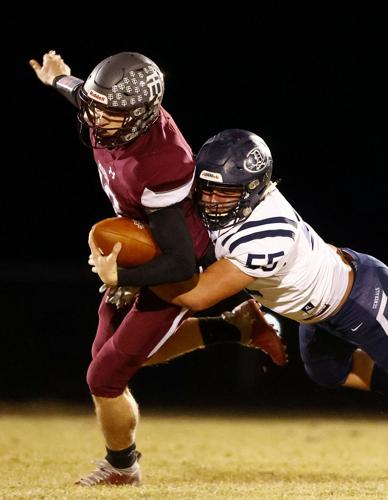 Thomas Dale’s Ethan Minter, left, is tackled by Dinwiddie’s Benjamin Pfister during the first half of a high school football game at Chester, Va., on Friday, November 5, 2021. 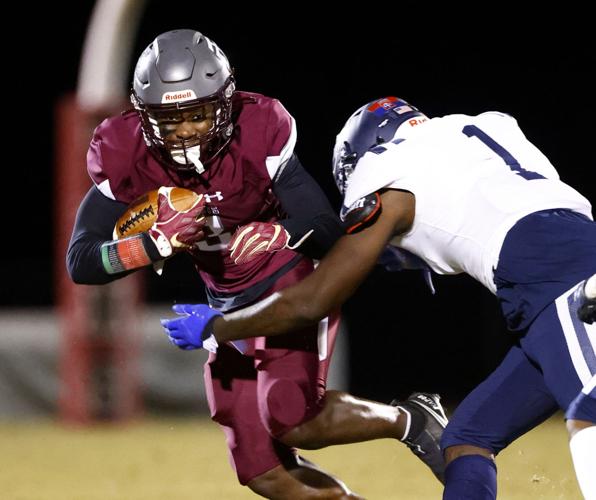 Thomas Dale’s Donovan Woods, left, is tackled by Dinwiddie’s Zachary Weaver during the first half of a high school football game at Chester, Va., on Friday, November 5, 2021.

The cannons have boomed aplenty and must soon run short of gun powder.

The horse and rider have surely ran more 100-yard dashes than they can count.

Navy Nation has roared nonstop, and 12-0 Dinwiddie has romped its way to Saturday's Region 4B championship, with kickoff set for 1:30 p.m. as unbeaten King George (12-0) comes calling for the Generals' first region title game at home since 2017.

Spearheaded by dynamic dual-threat sophomore quarterback Harry Dalton and impassioned senior defensive back Quentin Mankin, Dinwiddie has won every game this year by at least four touchdowns, averaging a gaudy 51.75 points while holding opponents to 7.67.

Generals coach Billy Mills, who has led Dinwiddie since 2005, called his team's dominance both a blessing and a curse. In a 41-13 win at Hopewell Oct. 7 and last week's 49-12 victory over Hanover, Mills said his team was tested much more than the final score would indicate.

"There wasn't really a sense of worry or panic or anything like that, but last week was the first time it's really been hard for our offense," Mills said.

"Hanover did a great job in the first half of shutting somethings down that we do. And we got a little frustrated. I told the guys, 'It's not always going to be easy. That's not life. You're gonna have to keep pounding away at it, that's why they play four quarters. We'll eventually punch through.'"

Dinwiddie punched through alright, as it has all year, outscoring the Hawks 35-6 in the second half. But Mills was thankful his Generals could take a lesson away from the win, telling his team that at this point in the season, every opposition is good and they won't be able to breeze to victory as they did throughout the regular season.

"I think they kind of got a little spoiled by it, so that was good that we were able to have that and still come out with the victory," Mills said. "That should help us going forward."

Mills talked a lot about how much fun he's had this year coaching a team full of "program kids" with standout work ethics. He's only got a few players over 200 pounds, including 6-foot-7, 335-pound senior left tackle Collen Jackson.

Speed and weight-room strength have been the calling cards for a relatively undersized Generals outfit, even in the run game where junior back Raphael Tucker has augmented Dalton's production with aplomb.

Though the Generals' backbone is their ground game, they've kept opposing defenses honest with an efficient and explosive air attack. Christian Drumgoole, Marquis Smith and Zalen Wiggins all have 400-plus yards receiving on just 20-plus catches and nearly 20 TDs between them.

It's been easy to overlook the Generals' defensive prowess as Dalton and Co. garner headlines. But Dinwiddie has been equally dominant on that side of the ball behind Mankin's leadership in the secondary and standout seasons from linebackers Se'Von McDowell, Alex Elmore and Trey McBride, plus safeties Adrian Parson and Howard Spencer, all upperclassmen.

Mills has a points system for grading productivity of his defensive players, who earn the title of "dog soldier" with 125-plus points for the year.

"The whole defense has made dog soldier," Mills said with a note of pride. "We knew coming in that our secondary and our linebacking corps were going to be pretty strong."

The line was the question coming into the year, but senior end and first-year starter Chris Bowles has been huge, Mills said. He's got 9 1/2 sacks, and McDowell has 10 1/2. Tackle Kahlial Parham, an all-region honoree last year, has proved key in plugging rushing lanes.

"We're not he biggest bunch out there," Mills said. "They're strong kids, weight room kids, and we're real quick, move around and do a good job of flying to the football."

Of the unbeaten Foxes who last week knocked off reigning Class 4 champs Varina 31-14, Mills sees a team similar to his own, though one decidedly bigger on paper.

King George has standout size and speed on defense, plus a physical ground game behind a rugged line, a tough-nosed quarterback and explosiveness outside primarily in the form of junior receiver Chanz Wiggins.

Wiggins is a four-star recruit for which 247Sports lists offers from Virginia, Virginia Tech, West Virginia and Penn State. He could be matched up with Mankin in an X-factor 1-on-1 battle.

On Dinwiddie's side Saturday will be one of the best high school football environments in the central region. His team is practicing on Thanksgiving for the first time since 2019, and Mills has told his players throughout the week how blessed he is to be coaching them.

"They're just fun kids to be around, it's great that they get to do this at home, they earned that, they've worked really hard all year," Mills said.

"Our fans are some of the best that I've ever seen. These guys show up, doesn't matter what the day is, what the time is, what the weather is, where we're at. We regularly have bigger crowds than our opponents at their place. The horse is gonna be running around, hopefully the cannon will go off a few times and we put on a good show for them on Saturday."

It was just a matter of time.

"I understand the tradition of both programs, the two winningest programs in the history of the central region."

Talon, 16, is the first Chiefs golfer to earn the top honor since Jackie Beers was recognized in 2000 and 2001, when the All-Metro golf team was established.

The first half was a track meet. The second half was a defensive slugfest.

"We have a formidable opponent, we know they're going to come down here and play their best football. We have to match that intensity and that energy."

The senior led the Cougars to a second consecutive LIS title after breaking a decade-long drought for her team.

King William falls to Poquoson in Region 2A title game

DINWIDDIE, Va. — Patrick Henry's Jordan Allen (9) cuts down Dinwiddie quarterback Harry Dalton (6) in the Patriots' 35-20 victory over the host Generals in a Region 4B semifinal on Friday, Nov. 19, 2021.

Thomas Dale’s Ethan Minter, left, is tackled by Dinwiddie’s Benjamin Pfister during the first half of a high school football game at Chester, Va., on Friday, November 5, 2021.

Thomas Dale’s Donovan Woods, left, is tackled by Dinwiddie’s Zachary Weaver during the first half of a high school football game at Chester, Va., on Friday, November 5, 2021.