Mother of would-be Reagan assassin John Hinckley, who lived with him near Williamsburg, dies at 95 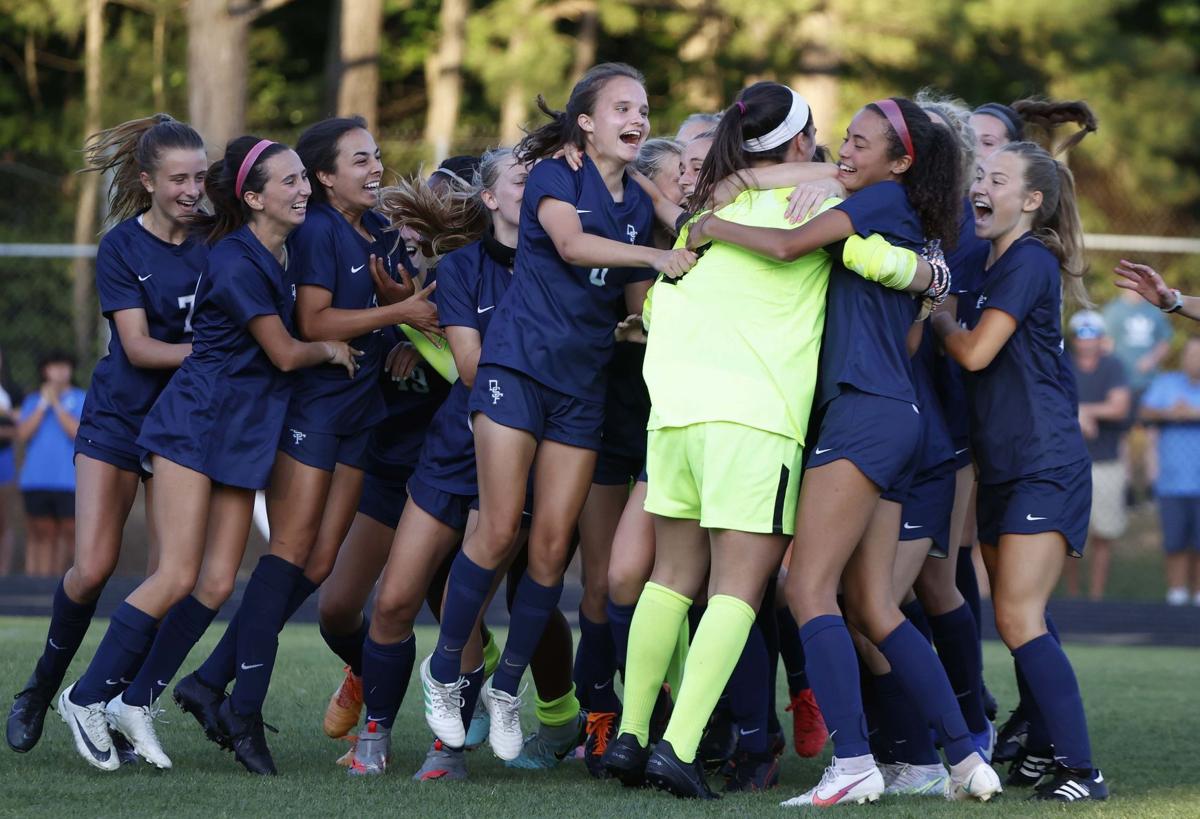 Teammates celebrate with goalkeeper Lauren Hargrove after Douglas Freeman defeated Deep Run in penalty kicks during the Region 5B championship game at Midlothian High School. The Mavericks claimed the region title and earned a spot in the Class 5 state tourney. 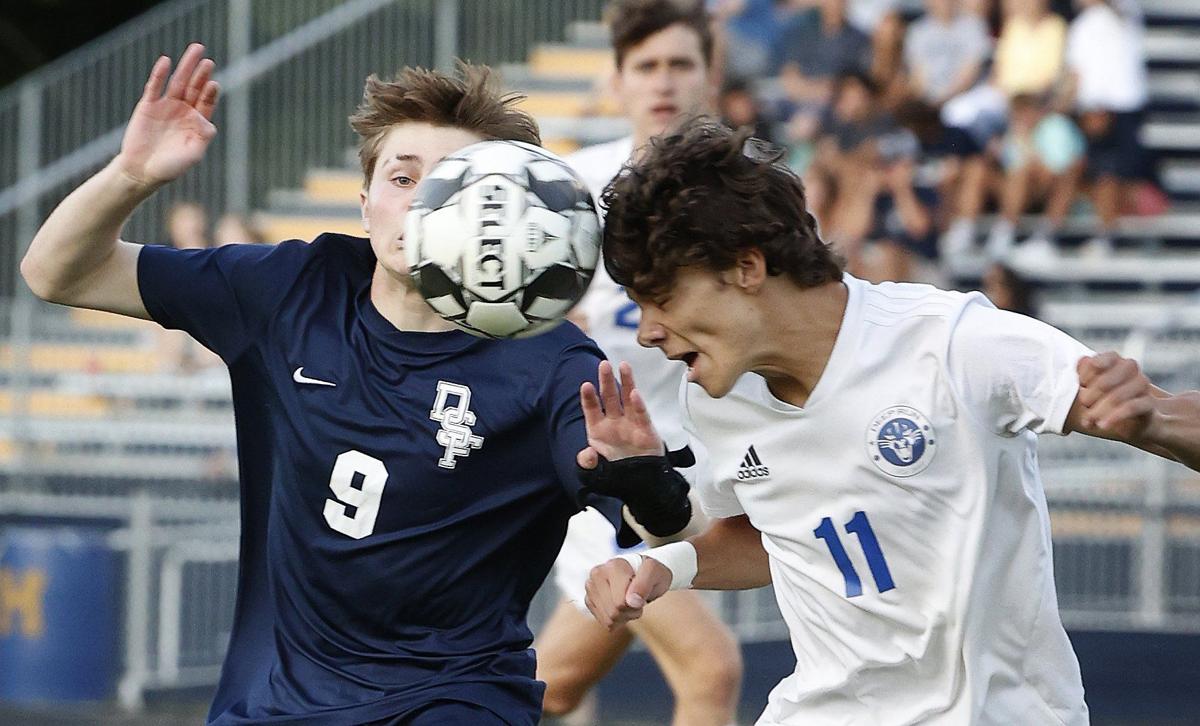 Deep Run’s Kent Turner heads the ball past Douglas Freeman’s David Cauble in the Region 5B boys championship. Mason Goldstein scored in the fourth overtime period to give the Wildcats a 2-1 win over the Mavericks. Look for an expanded account from the match at Richmond.com. 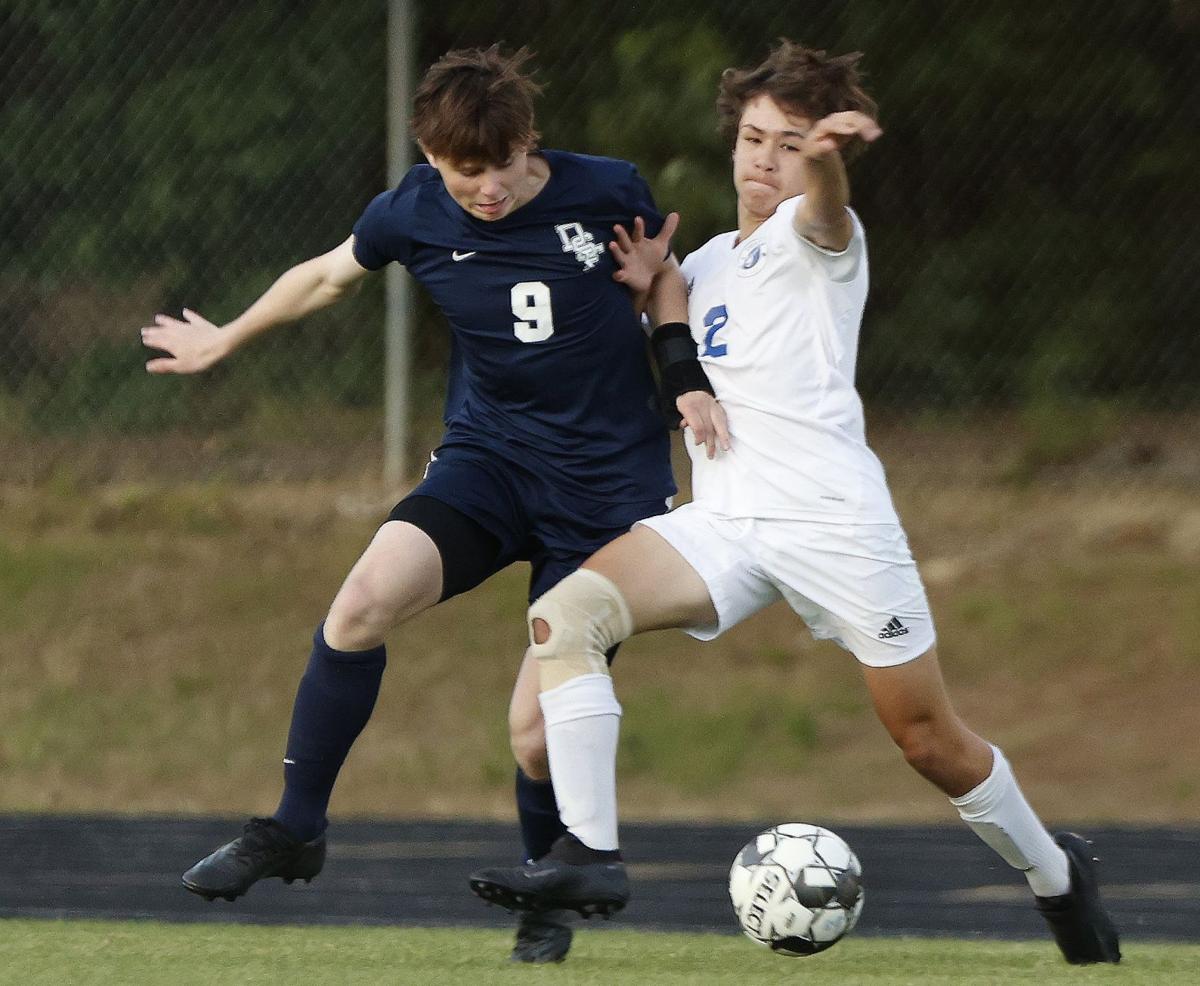 Deep Run’s Davis Cauble and Freeman’s Marcelo Rodriguez vie for the ball during the Region 5B championship Thursday, June 17, 2021. 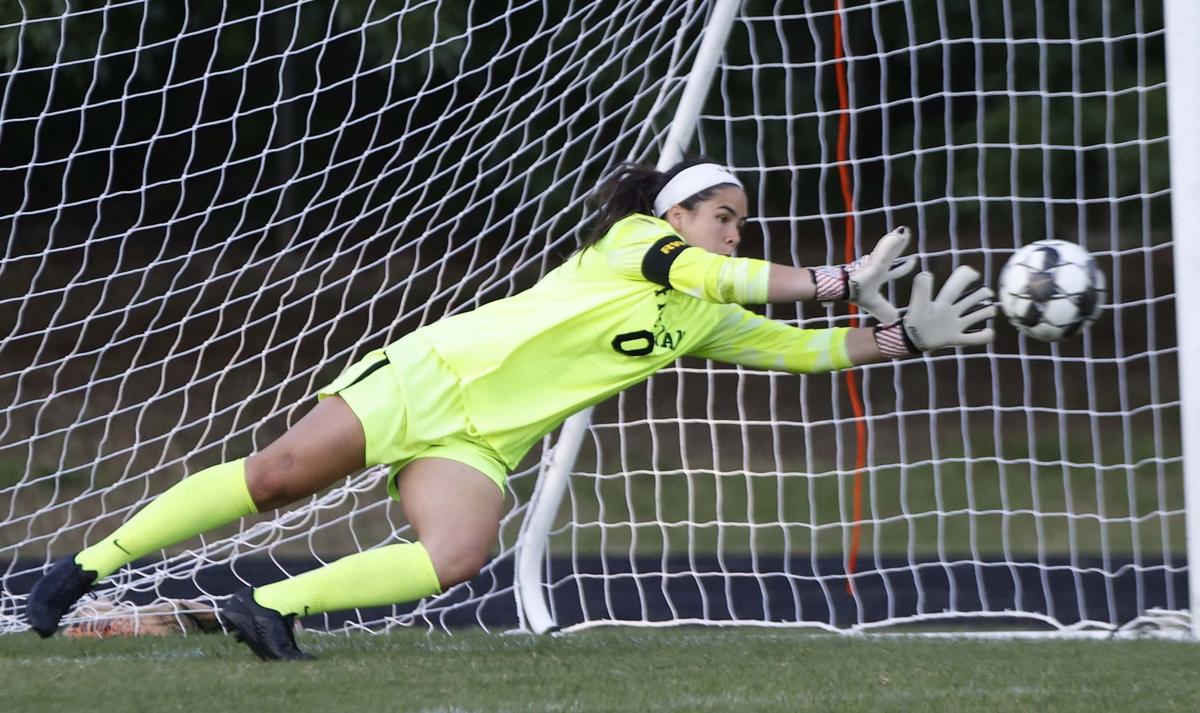 Freeman’s Lauren Hargrove makes a save during penalty kicks against Deep Run during the Class 5, Region B title game at Midlothian. For more photos, visit Richmond.com.

For the Douglas Freeman girls soccer team, there was an important seed that was planted in April.

In the Mavericks’ season opener, they beat rival Deep Run on a goal by Julia Bristow. With that, coach Bill Bartoszek’s group knew that it could beat the Wildcats, a team it fell to in the 2019 Class 5, Region B final.

Douglas Freeman then proceeded to run through its schedule without a loss, to again punch a ticket to the region championship game. And, again, their opponent was Deep Run.

In that bout, on Thursday at host Midlothian High, the squads again played a game Bartoszek aptly described as a battle of attrition.

But the Mavericks, after their April game against Deep Run, had no doubt in their minds that they could beat the Wildcats again.

They did, outlasting Deep Run through four overtimes for another 1-0 win — secured with a 4-2 advantage on penalty kicks.

Douglas Freeman, now 13-0, punched a ticket to the Class 5 state tournament, where it’ll host the Region A champion on Monday.

“I think both teams just want it so bad,” Douglas Freeman senior Ava Lohmann said. “And there is that rivalry built in between the two teams. So, when we go head to head, it’s all or nothing.”

It was Lohmann who smacked in the clinching penalty click, igniting the Mavericks’ celebration. Three freshmen teammates knocked in the other penalties: Ellie Grace Robinson, Catherine Doll and Anna Bitsko.

Senior goalkeeper Lauren Hargrove saved a pair of Deep Run (10-2) tries to help put her team ahead in the tally.

She’s been a reliable presence in goal all year for Douglas Freeman — the Mavericks have allowed just one goal this season, to Midlothian in Monday’s region semifinals. She had three saves Thursday.

The intensity of Thursday’s game picked up as regulation came to a close, and in overtime. Late in the first overtime period, a corner kick by Douglas Freeman junior Maggie Patten floated dangerously in front of the goal, but was cleared.

Not long after, another Patten corner kick helped set up a chance for Roinson, but her flick flew wide left.

And a goal remained elusive as each five-minute period ticked away.

“Building the anticipation every single minute,” Hargrove said, describing what the deadlock was like. “I’m back there as a goalkeeper, I’m just waiting for my team to score. Doing everything I can. I know, [Lohmann] on the other end [was] doing the same thing.”

After the fourth overtime, both teams gathered at midfield for the penalty kicks. Hargrove saved the Wildcats’ second and third chances, and the Mavericks didn’t miss.

In the state tournament, Douglas Freeman will host either First Colonial or Cox out of Region A, in Monday’s semifinals.

And a tightly contested win like Thursday’s gives the Mavericks much confidence, mentally and emotionally, heading into the next stage, Hargrove said.

It’s an opportunity they’ve been building to since the win over their rivals in April.

“These girls don’t give up,” Bartoszek said. “We’re going into it eyes wide open and we’re ready to go.”

The beginning of the season for the Deep Run boys soccer team featured multiple bumps in the road.

The Wildcats suffered losses to both Douglas Freeman and Mills Godwin early. And, on top of that, the team grappled COVID-19 issues for a time, which paused practice for two weeks.

"You know how easy it would've been to fold?” coach Frank Ford asked. “But they didn't fold.”

They didn’t on Thursday either, in a rematch against Douglas Freeman in the Class 5, Region B final at Midlothian High.

Continuing a run of success that sprouted from the early season struggles, the Wildcats rebounded from a first-half deficit to tie the game midway through the second half.

And in the eleventh hour — the final minute of a fourth overtime — sophomore Mason Goldstein manufactured a furious run to beat the Douglas Freeman defense and score the winning goal, for a 2-1 final score.

Deep Run (10-2) avenged its April loss to the Mavericks and punched a ticket to the state tournament in one fell swoop. It was the first loss of the season for Douglas Freeman (12-1).

“We knew we could keep up with [Douglas Freeman]. We knew we were going to see them again,” Deep Run senior Kevin Sprince said. “We knew what we had to do.”

The Wildcats also beat Mills Godwin the second time around, in the opening round of the region playoffs, last Saturday.

On Thursday, a pair of brothers on opposing sides matched each other in the scorebook during regulation.

Ethan Johnson, a Douglas Freeman senior, launched a strike from the near the edge of the 18-yard box that nestled in the left corner of the goal to put the Mavericks up 1-0 with about 14:19 to go in the first half.

Down at the break, Ford didn’t make any adjustments heading into the second half. Instead, the Wildcats simply improved while playing their way.

"Just keep believing and keep playing the way we are,” Ford said, of his halftime message. “And they got better. After [Douglas Freeman] scored we started sorting things out and getting better.”

Finally, with just under 22 minutes to play in regulation, Deep Run junior Logan Johnson — Ethan’s brother — converted on a goal of his own to tie it.

The experience of scoring after his brother was “crazy,” Logan said. He admitted there’s a bit of trash talking at home heading into matchups with his brother.

“But, after, it's all love,” Logan said, after his brother came up to chat following the game. “So it was really nice to score when he scored, to prove I can rock with him a little bit."

Logan’s goal created a deadlock that appeared as if it wasn’t going to break, at least before penalty kicks.

But Sprince, who Ford called Deep Run’s engine from the center back spot, said the Wildcats knew if they worked harder that they would win.

In the waning moments of the fourth overtime period, a sudden-death frame, Goldstein collected a ball flicked by junior Michael Mancuso.

In his head, Goldstein thought “just run.” And he did, bursting down the right side of the field with a fast sprint.

“I knew I just had to run. And once I beat the first guy, I knew I was still going,” Goldstein said. “I knew there was one more coming. But I knew I was going to get past him, too. And then I just hit it, and hoped it went in.”

The ball sailed into the goal, and the celebration commenced immediately.

In states, Deep Run will host Region A’s First Colonial or Cox in a Monday semifinal.

The Wildcats didn’t fold earlier this spring. And now the 2018 and 2019 Class 5 state runner-ups are right back on the final stage.

"Everyone's got individuals, but can you make your individuals a bigger piece? That's what these guys are great at,” Ford said.

The Mavericks defeat the Wildcats during the Region 5B championship game at Midlothian High School Thurs., June 18, 2021.

Teammates celebrate with goalkeeper Lauren Hargrove after Douglas Freeman defeated Deep Run in penalty kicks during the Region 5B championship game at Midlothian High School. The Mavericks claimed the region title and earned a spot in the Class 5 state tourney.

Deep Run’s Kent Turner heads the ball past Douglas Freeman’s David Cauble in the Region 5B boys championship. Mason Goldstein scored in the fourth overtime period to give the Wildcats a 2-1 win over the Mavericks. Look for an expanded account from the match at Richmond.com.

Deep Run’s Davis Cauble and Freeman’s Marcelo Rodriguez vie for the ball during the Region 5B championship Thursday, June 17, 2021.

Freeman’s Lauren Hargrove makes a save during penalty kicks against Deep Run during the Class 5, Region B title game at Midlothian. For more photos, visit Richmond.com.