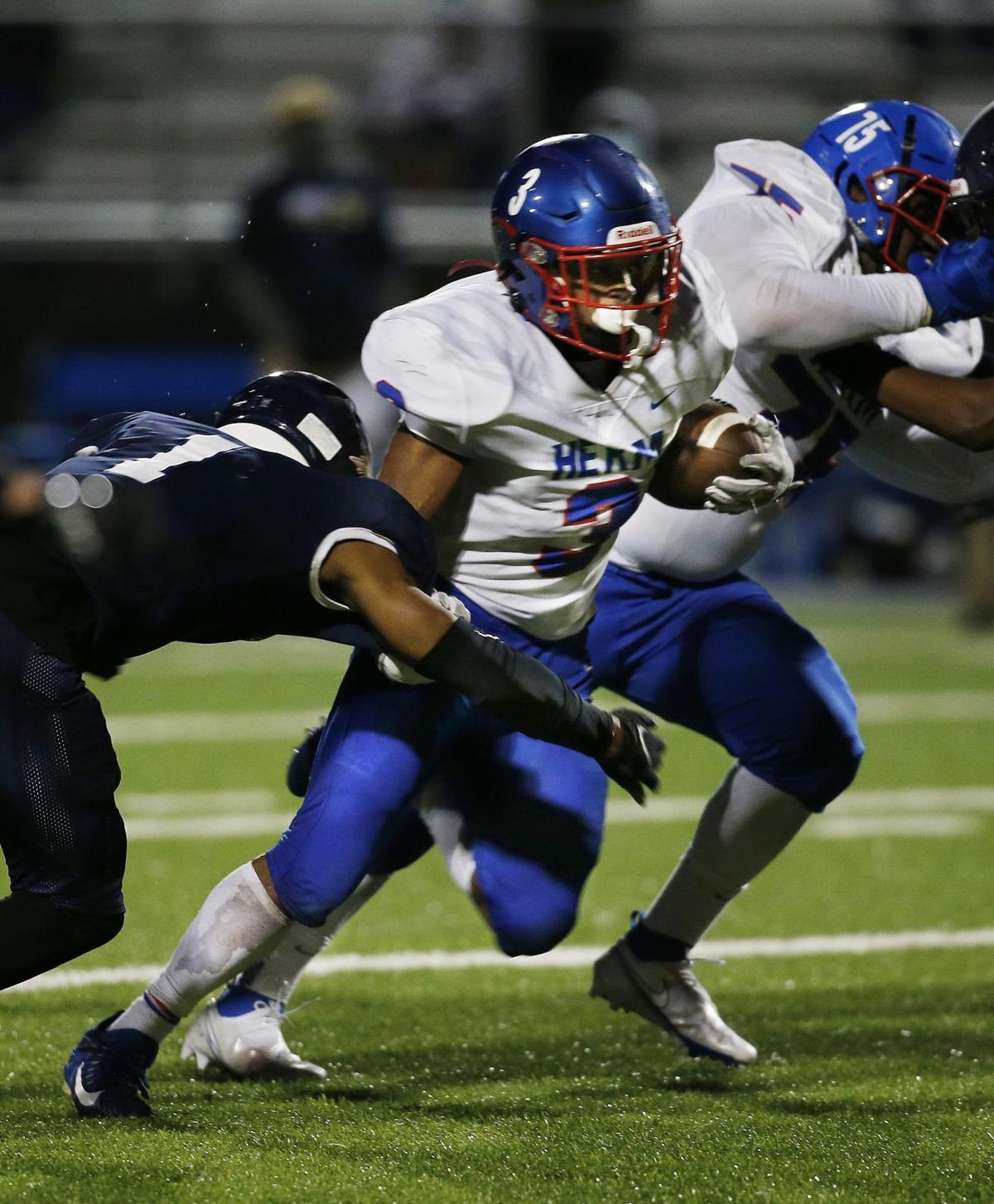 Nigel James of Hermitage scored the only touchdown in the visiting Panthers’ season-opening win over Varina on Monday night. 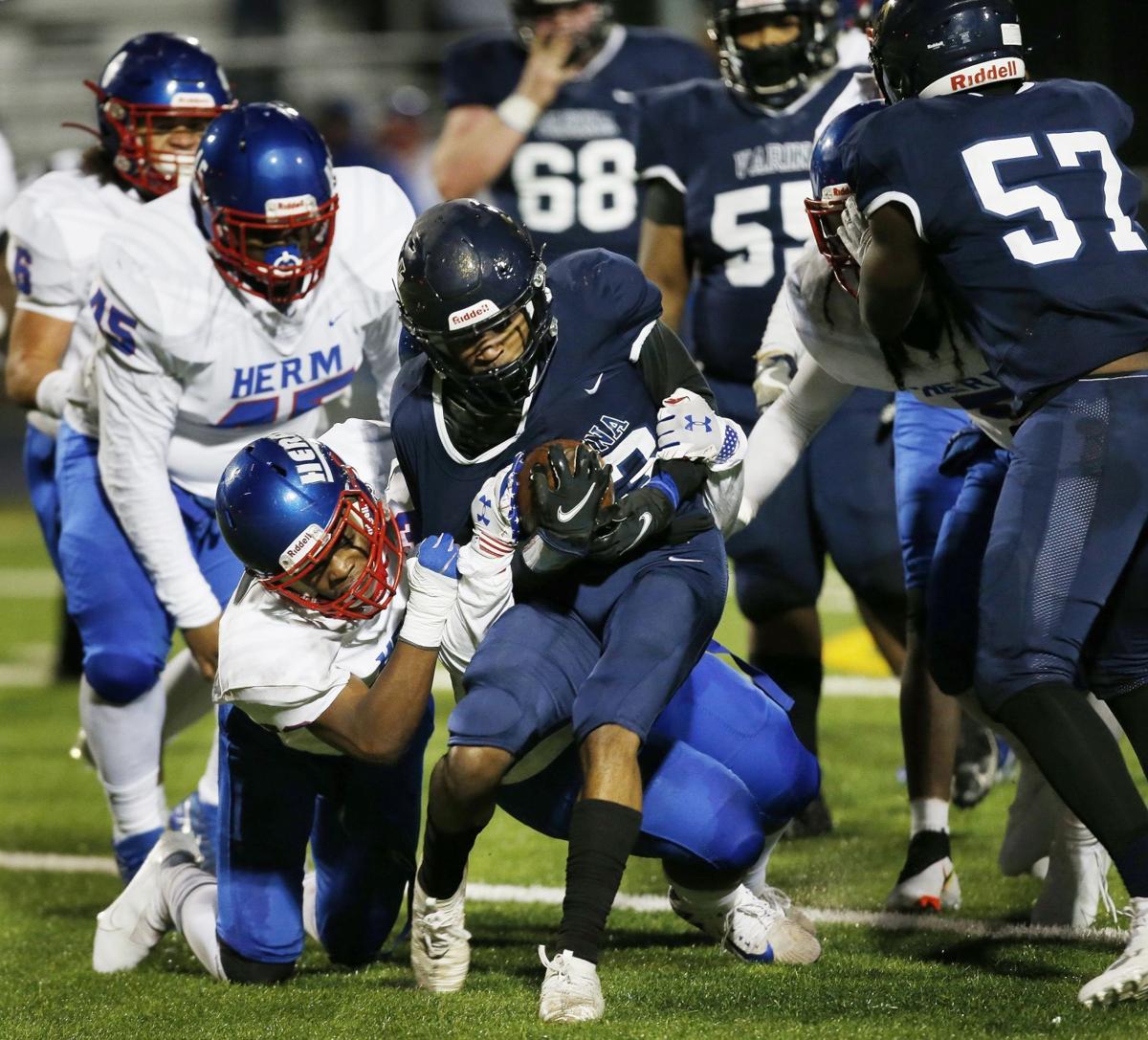 Varina’s Tyrell Harris was pulled down by Hermitage defenders after a short gain in the Blue Devils’ season-opening home loss to the Panthers on Monday night. 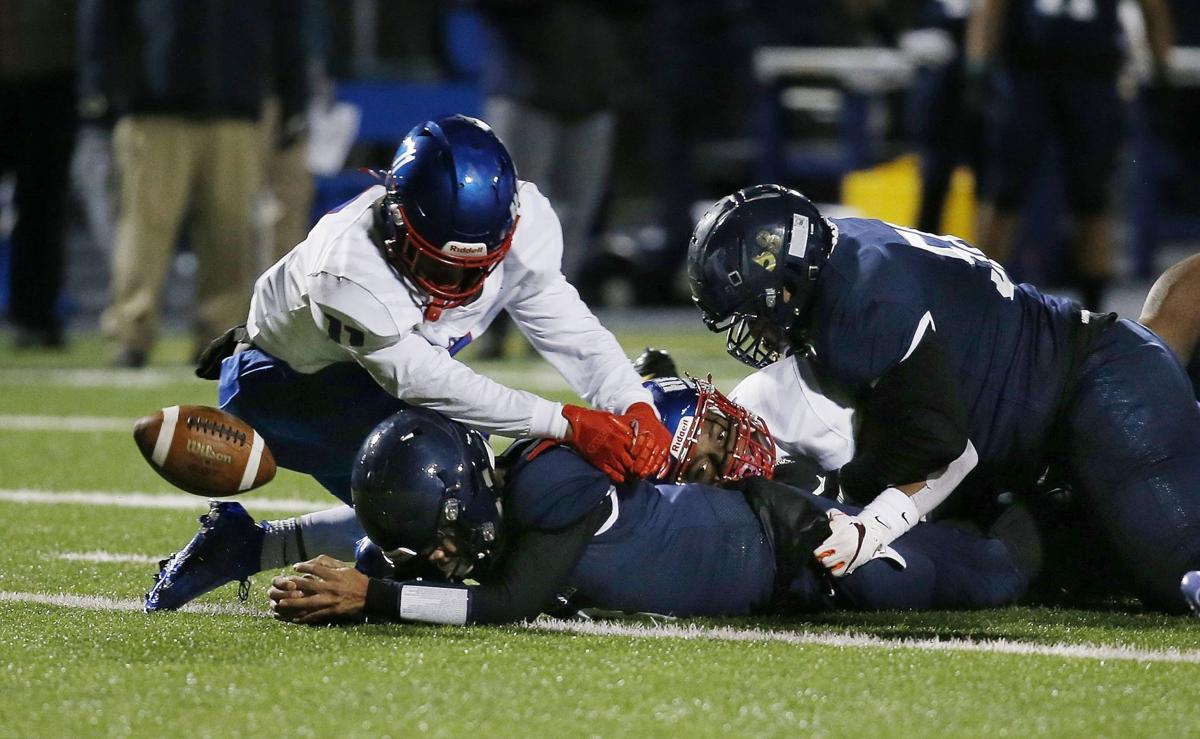 Varina took on Hermitage at Varina High School, Monday 2/22/2021, in the first game of the season for both schools. Varina’s Jailin Walker #21 looses the ball while trying to pick up extra yards and a first down.

The Hermitage High football program and coach David Bedwell announced their return to local prominence Monday night, beating defending Class 5, Region B champion Varina 9-0 behind 142 yards on 31 carries from running back Nigel James on the road.

The Panthers’ defense intercepted second-team All-Metro quarterback Bobby Dunn three times and recovered a pair of fumbles on a wet and chilly night at Varina. Nasir Shamsid Deen kicked a 28-yard field goal in the third quarter, and James carried a pack of Blue Devils defenders into the end zone with him from 5 yards out late in the fourth to put the outcome to rest.

The Panthers (1-0) have gone 5-15 during the past two years after 17 years of sustained success under former coach Patrick Kane. Bedwell, who has won three state titles in 20 years coaching locally, coached his first game since stepping away from the sideline in 2016.

Bedwell said winning the hard-nosed affair in adverse conditions was a welcome early-season learning experience for his revitalized program.

“Back when you start in the summer and it’s warm, you want to be playing when it’s this way. So for me it was great, for our kids it’s been great, just excited that they’re developing that mentality of being tough,” Bedwell said.

“Developing our kids, teaching them the things we want to teach them and making them tough, that’s what we got out of tonight’s game. They’re great kids; they’ve been through a lot the last couple years.”

James is a three-year starter who plays both sides of the ball. His longest carry was 11 yards, but a smash-mouth running style took its toll on the Varina defense as the game wore on.

“We rely on him a lot. He is just a heck of a football player and he’s tough,” Bedwell said of his senior bell cow.

The Panthers pressured Dunn (4 of 9 for 48 yards) virtually every time he dropped back, forcing hurried throws that turned to interceptions and incompletions. The Hermitage front also held Varina senior running back Jailen Walker to 48 yards on 14 carries.

Bedwell said the disruptive defensive effort was a product of belief in scheme on the part of his players.

“Kids just started believing in what we were doing, finally saw the game plan come together and started playing hard, physical,” Bedwell said.

“We knew if we could pressure them and we could get after them that we might be able to cause some turnovers, and that’s exactly what we did. ... Once they see it happen, they start believing more.”

Varina (0-1) fumbled a snap on its first possession and just its second play from scrimmage. Blue Devils coach Marcus Lewis, in his first game leading a program for which he played, motioned his hands down to the ground in a calming gesture, imploring his team to settle down.

Led by the veteran linebacking corps of Omarion Robinson, Jaden Carthorne and Walker, Varina’s defense also was stout, twice denying Hermitage any points on red zone drives. The Blue Devils just never got comfortable on offense. Their fourth turnover was the most costly, and it finally proved too much for the defense to overcome.

Varina took over on its 42-yard line when Walker recovered a Hermitage fumble with about 8 minutes to play. Down 3-0, it felt imperative that Varina capitalize on the field position and momentum.

But Dunn fumbled a snap around midfield on the fourth play of the drive, handing the ball back to Hermitage.

The reversal deflated the Varina defense. After a slew of chunk-play carries by James and sophomore back Jeremiah Coney (eight carries, 39 yards), Hermitage was in the red zone.

James pounded it in for the game’s only touchdown to put Hermitage up 9-0 with 4:22 to play. The Panthers picked off Dunn for the third time on the next possession, and ground out the clock.

Nigel James of Hermitage scored the only touchdown in the visiting Panthers’ season-opening win over Varina on Monday night.

Varina’s Tyrell Harris was pulled down by Hermitage defenders after a short gain in the Blue Devils’ season-opening home loss to the Panthers on Monday night.

Varina took on Hermitage at Varina High School, Monday 2/22/2021, in the first game of the season for both schools. Varina’s Jailin Walker #21 looses the ball while trying to pick up extra yards and a first down.