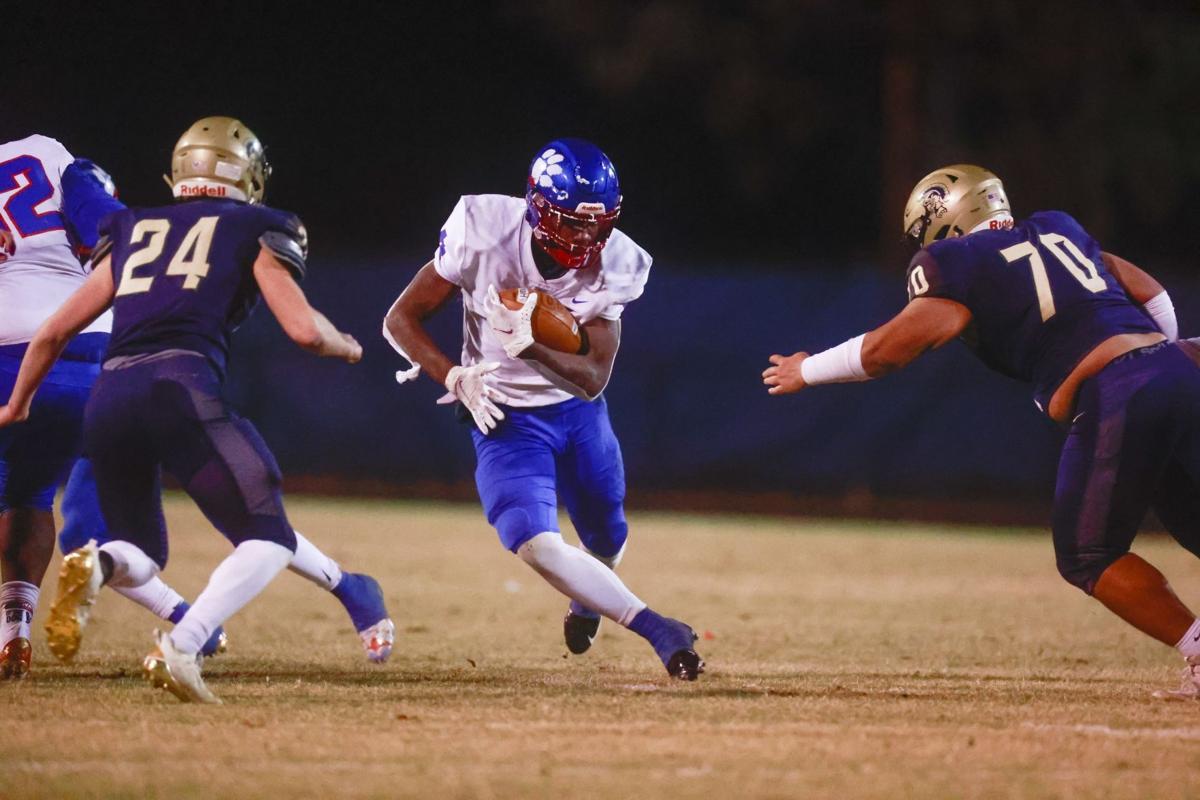 Hermitage running back Jeremiah Coney (4) carries the ball during a regional 5C football semifinal game between Midlothian and Hermitage on Friday, November 19, 2021 at Midlothian High School in Midlothian, Virginia. 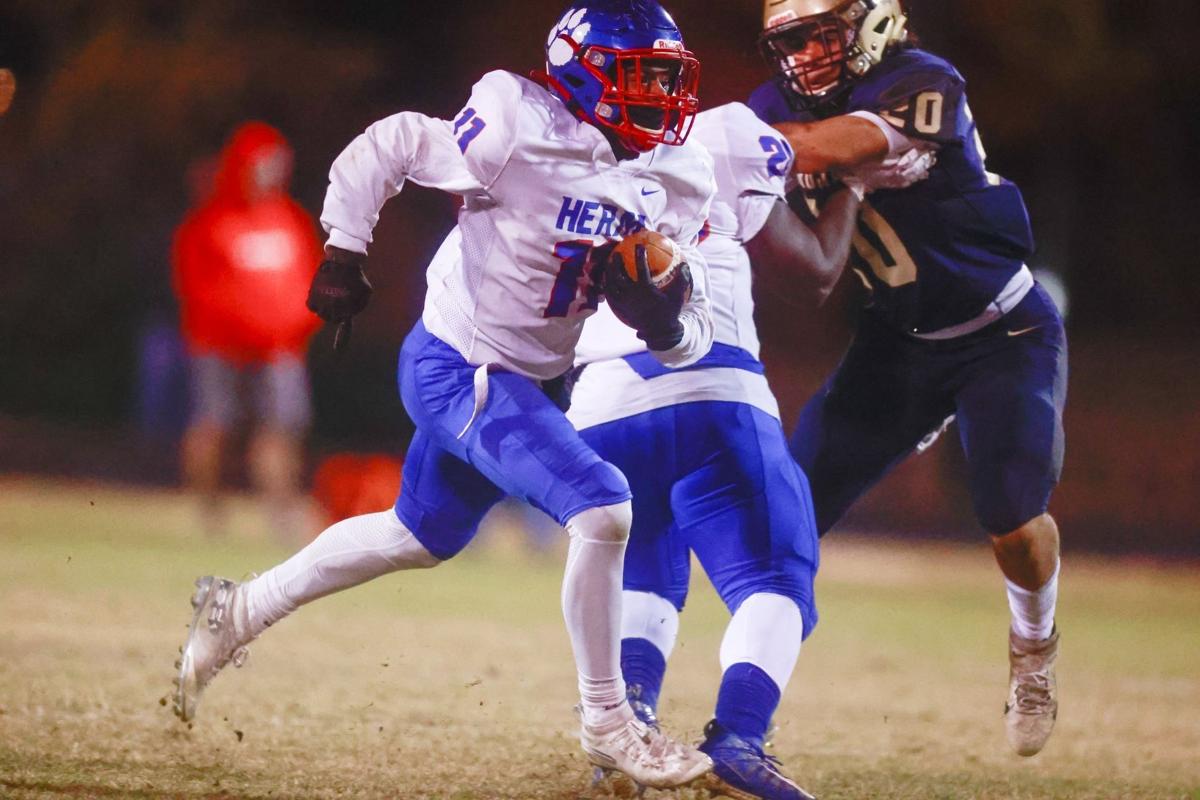 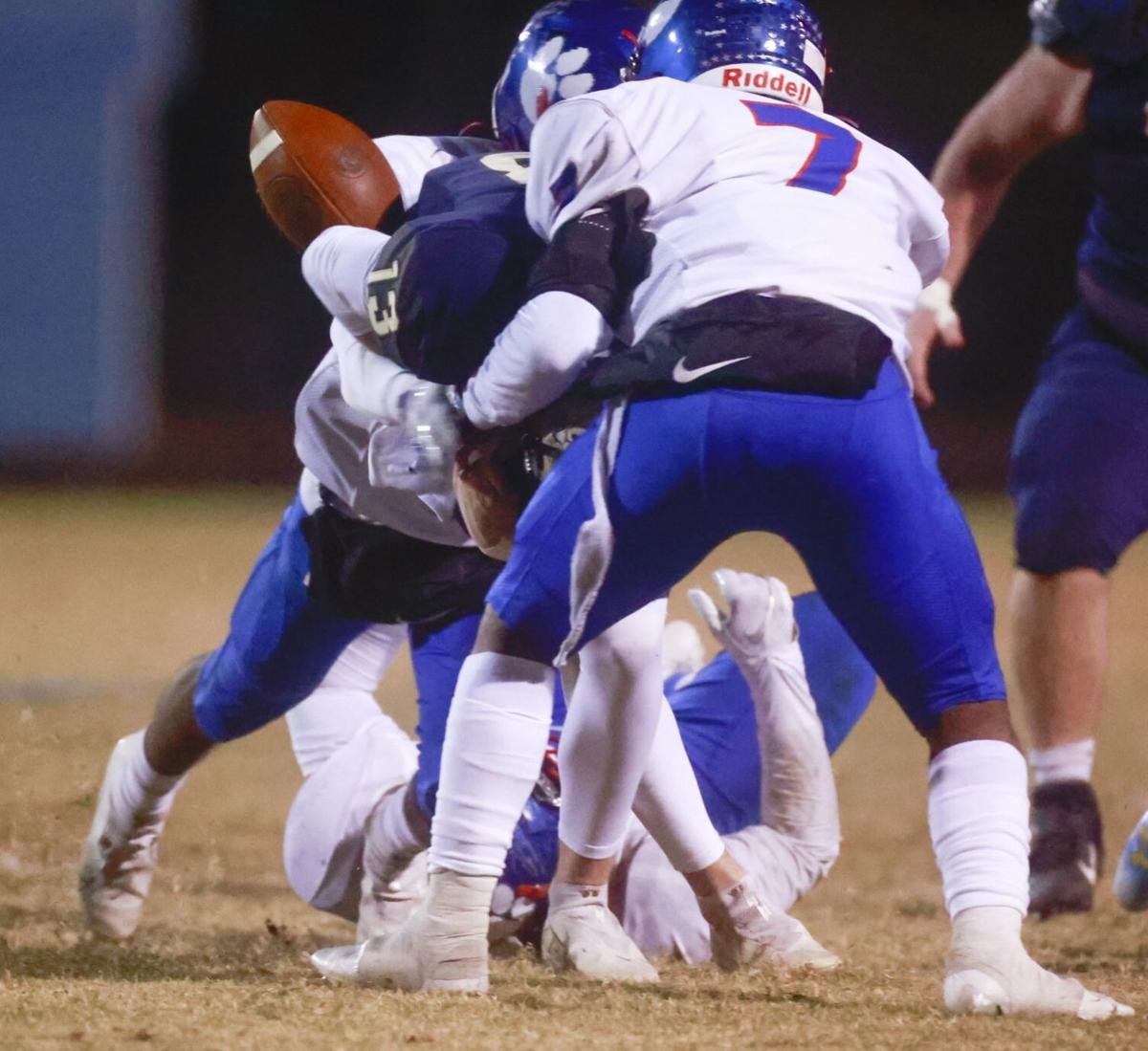 Midlothian quarterback Cooper Meads (13) fumbles as Hermitage’s Corey Morton (7) moves in during the Region 5C semifinals on Friday. The Panthers limited the Trojans to 66 yards of offense in the second half.

Why would Tim Jean-Pierre and his Hermitage football staff be worried?

So what if two serious faux pas had led directly to Midlothian touchdowns in the semifinals of the Region 5C playoffs Friday night at F.W. Poates Stadium, the Trojans’ home turf?

So what if their youthful protégés trailed 14-0 and found themselves on the short end not just on the scoreboard but on the energy and emotion scales as well?

“Worried? No,” Jean-Pierre said with a beaming smile crossing his face following the Panthers’ 24-14 victory. “A little concerned about how we were going to respond.

“When you’re dealing with young men, you’re always trying to give them examples of ‘Character wins’ and how to bounce back from adversity.

“They showed they had the character to bounce back from adversity. I’m extreme- ly proud of those guys.”

The downward spiral began with a mishandled snap on a punt, which Cam Penn blocked and Zack Phillips recovered on the Panthers’ 19.

On the Trojans’ first play, quarterback Cooper Meads connected with Braeden Lee for the touchdown. Maxx Lawton’s point-after put Midlo (7-3) up 7-0 at 1:36 of the first quarter.

The Panthers’ next offensive series ended painfully as well when Knox Berry returned an interception 64 yards for a score on the first play of the second period.

“At this point of the year, we have more leaders stepping up, and they’re checking each other’s temperatures,” Jean-Pierre said. “My thing is, play the play. Take it one moment at a time. Take those moments to build momentum. That’s what we did. That’s Herm ball.”

On a clear, high-30s and windless evening with a waning gibbous moon peering from above, Jean-Pierre’s guys responded as if on a mission.

Their next two possessions ended in touchdown runs of 3 and 13 yards by 5C offensive player of the year Jeremiah Coney and points-after by Braeden Megenity, enabling Hermitage (9-2) to erase its deficit.

“Adversity builds character,” said Jaylen Burton, the Panthers’ senior quarterback. “When you go down, don’t put your head down. Keep fighting. We’ve been preaching that. We’ve been there before. We know how to take this on.”

Hermitage dominated the second half.

Burton ended the first drive with a 27-yard TD run on an option keeper to the left side.

“The play was 23 zone,” he said. “You give it or pull it. What the defense gives is what I read. The ends kept crashing. I saw the chance and made a play for my team.”

Megenity’s 29-yard field goal at 5:51 of the fourth quarter put Midlo further in arrears, but by that time the Panthers were well in control.

Of their 317 total yards on 67 plays, 168 came on 40 snaps in the second half. KaRon Burton and Coney pulled yeoman’s duty during that stretch when Hermitage focused on its running game to take time off the clock.

“Coaches saw what the defense was doing and called the right plays,” K. Burton said. “My O-line did a great job executing their blocking assignments. I just hit the hole.”

“They were trying to get the running game going,” said Corey Morton, a safety in Hermitage’s 4-4 alignment who’s listed on the roster as athlete. “We just had to execute, read the keys, know what they were doing, just try to get a stop. That’s what we did tonight: fly to the ball. Play Herm football.”

The Panthers face Highland Springs next week for the region title.

Hermitage running back Jeremiah Coney (4) carries the ball during a regional 5C football semifinal game between Midlothian and Hermitage on Friday, November 19, 2021 at Midlothian High School in Midlothian, Virginia.

Midlothian quarterback Cooper Meads (13) fumbles as Hermitage’s Corey Morton (7) moves in during the Region 5C semifinals on Friday. The Panthers limited the Trojans to 66 yards of offense in the second half.