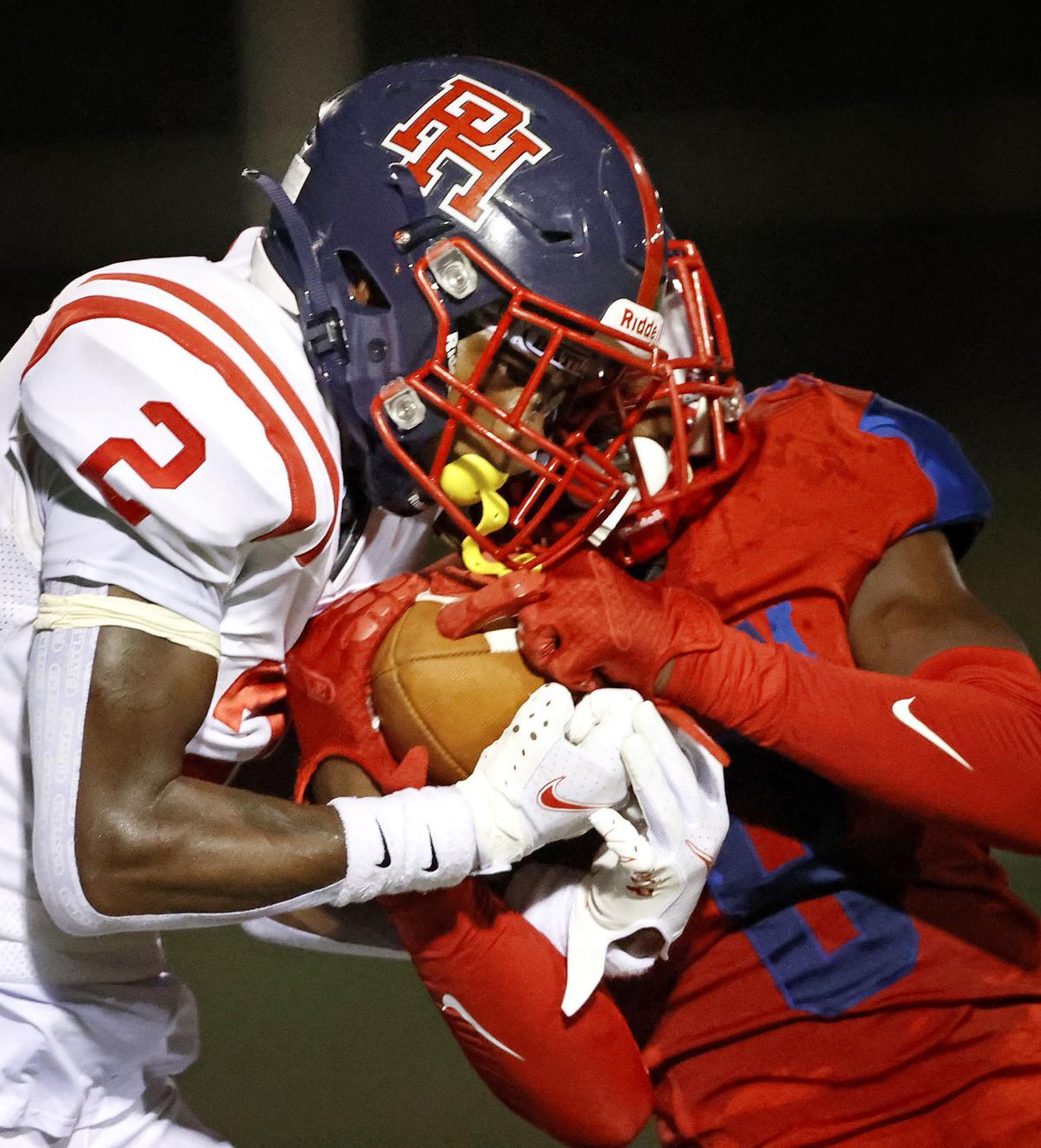 Patrick Henry’s Jayden Mines and Hermitage’s Breon Gunnell vie for a pass intended for Mines Friday, September 10, 2021. A penalty was called on the play. 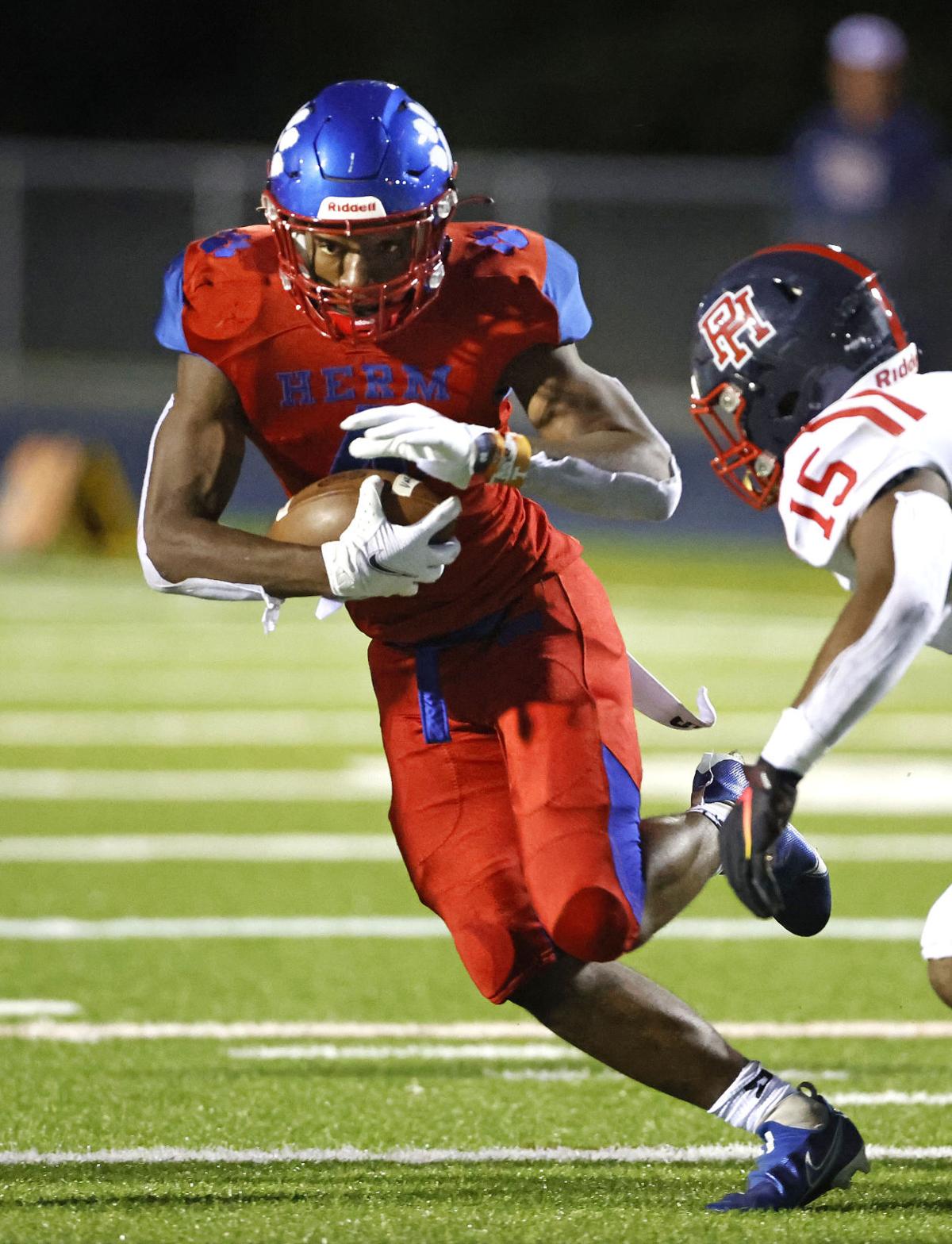 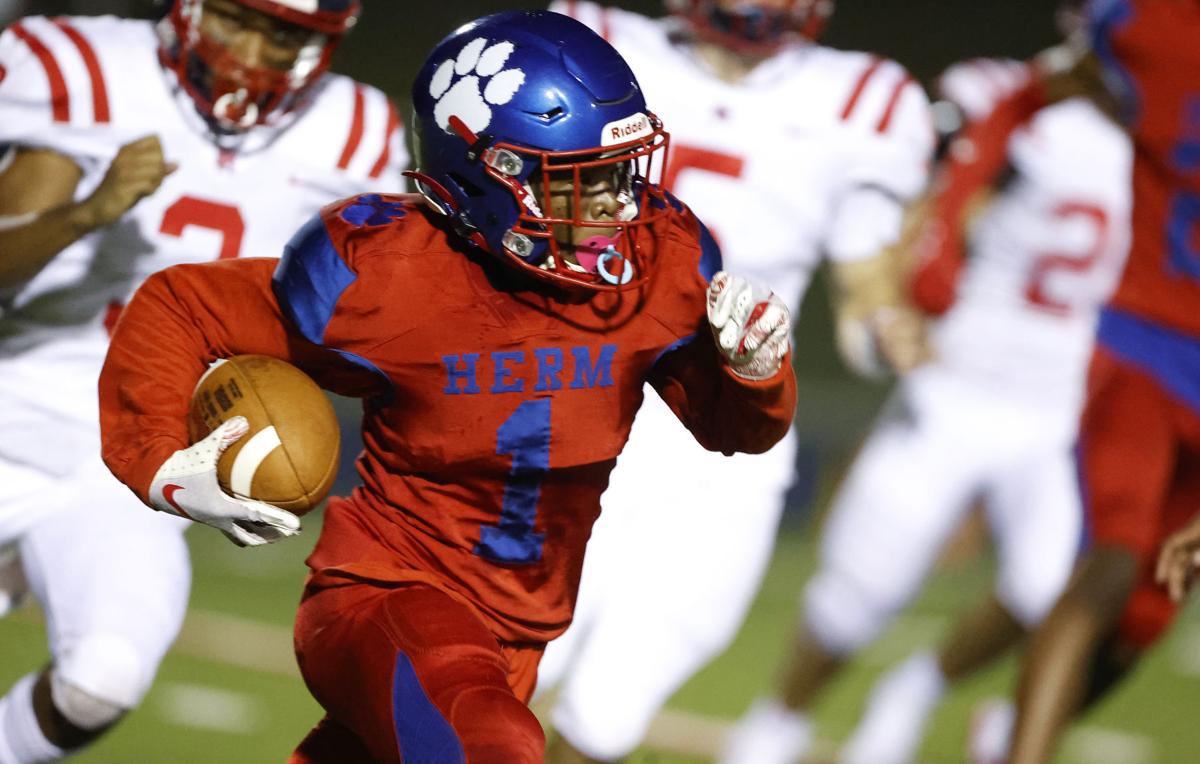 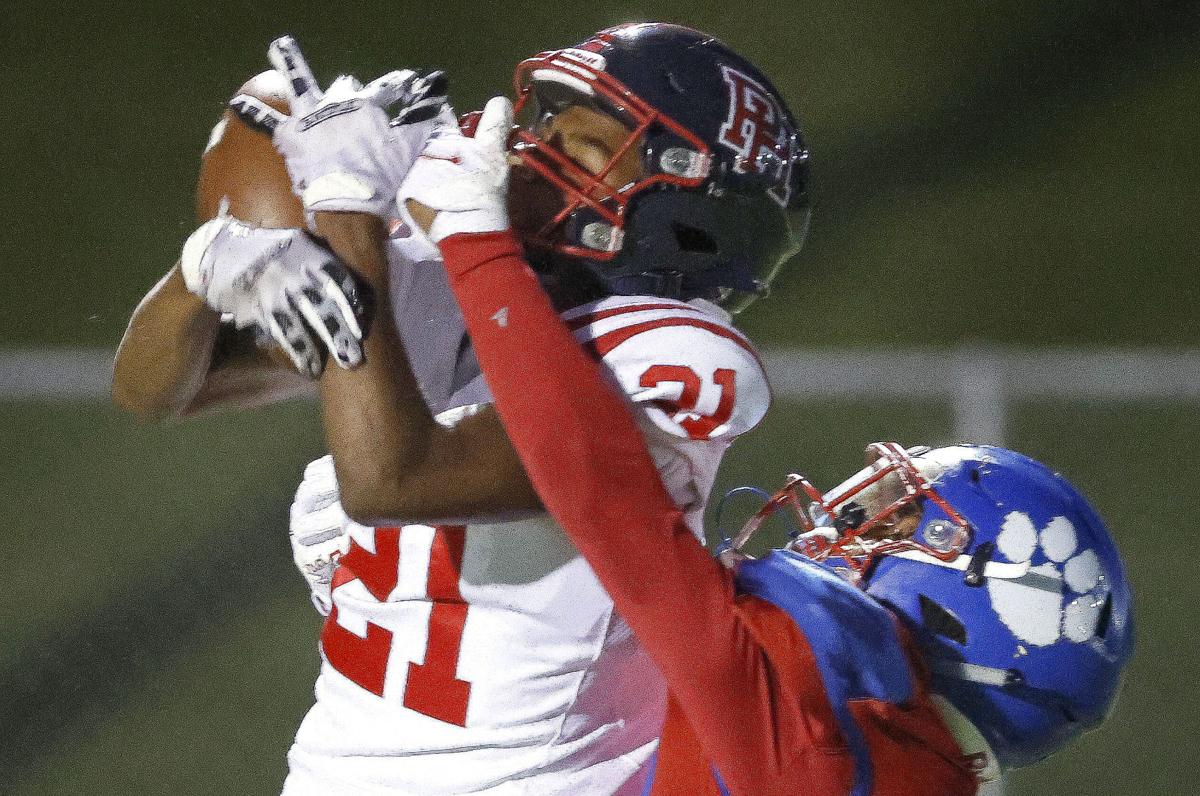 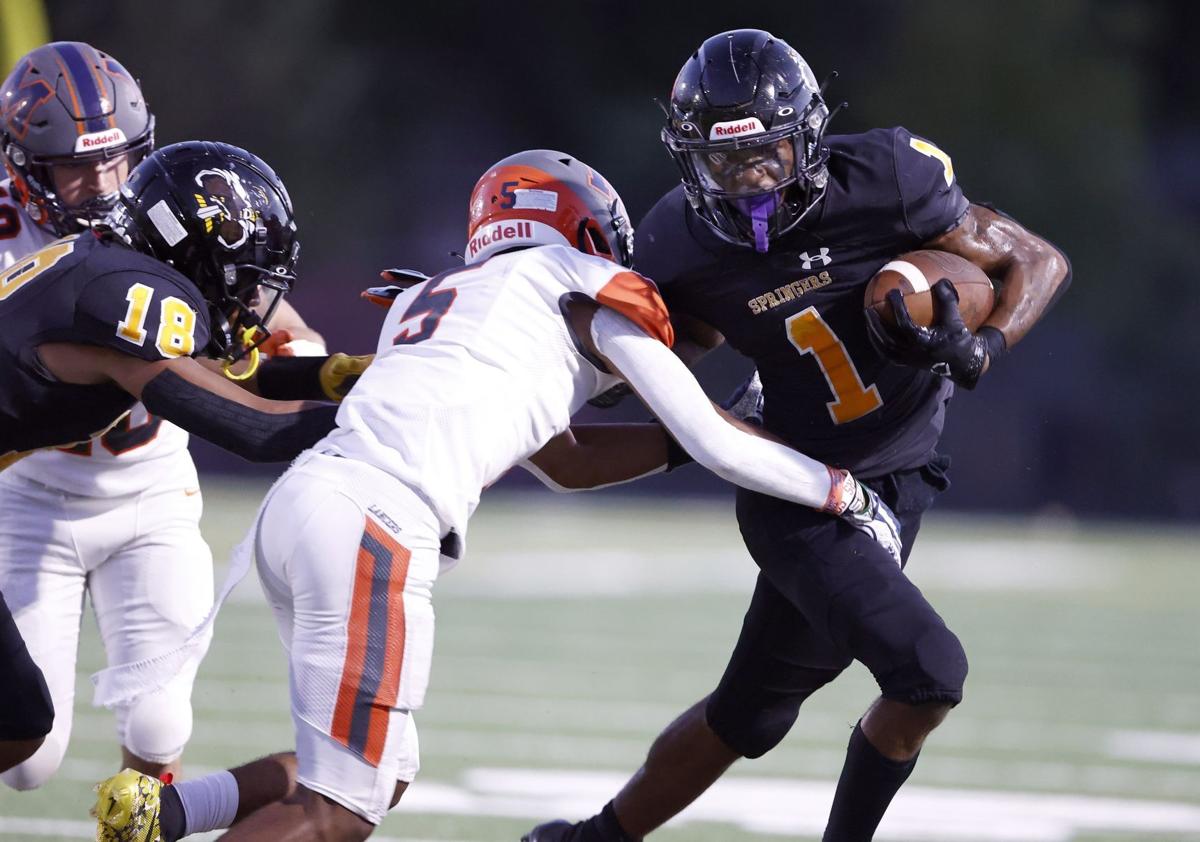 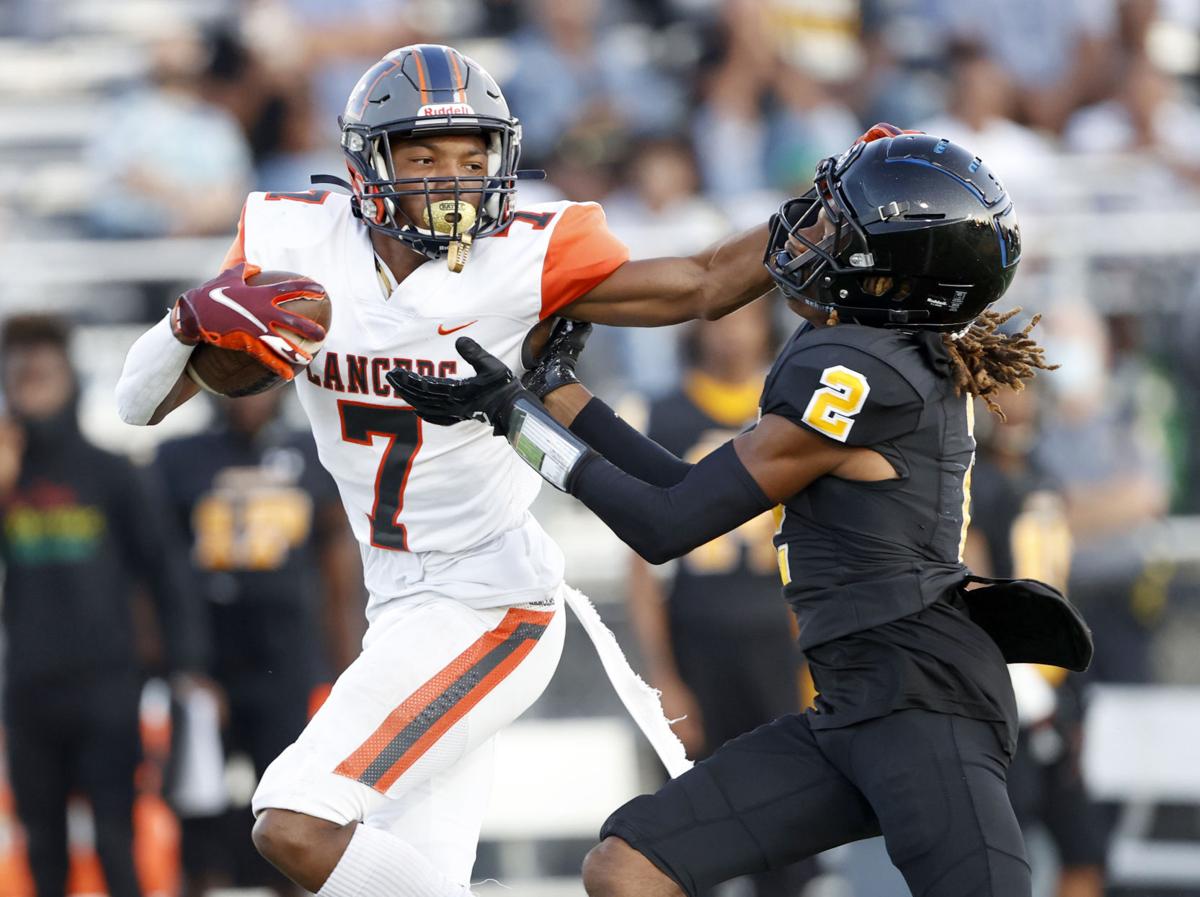 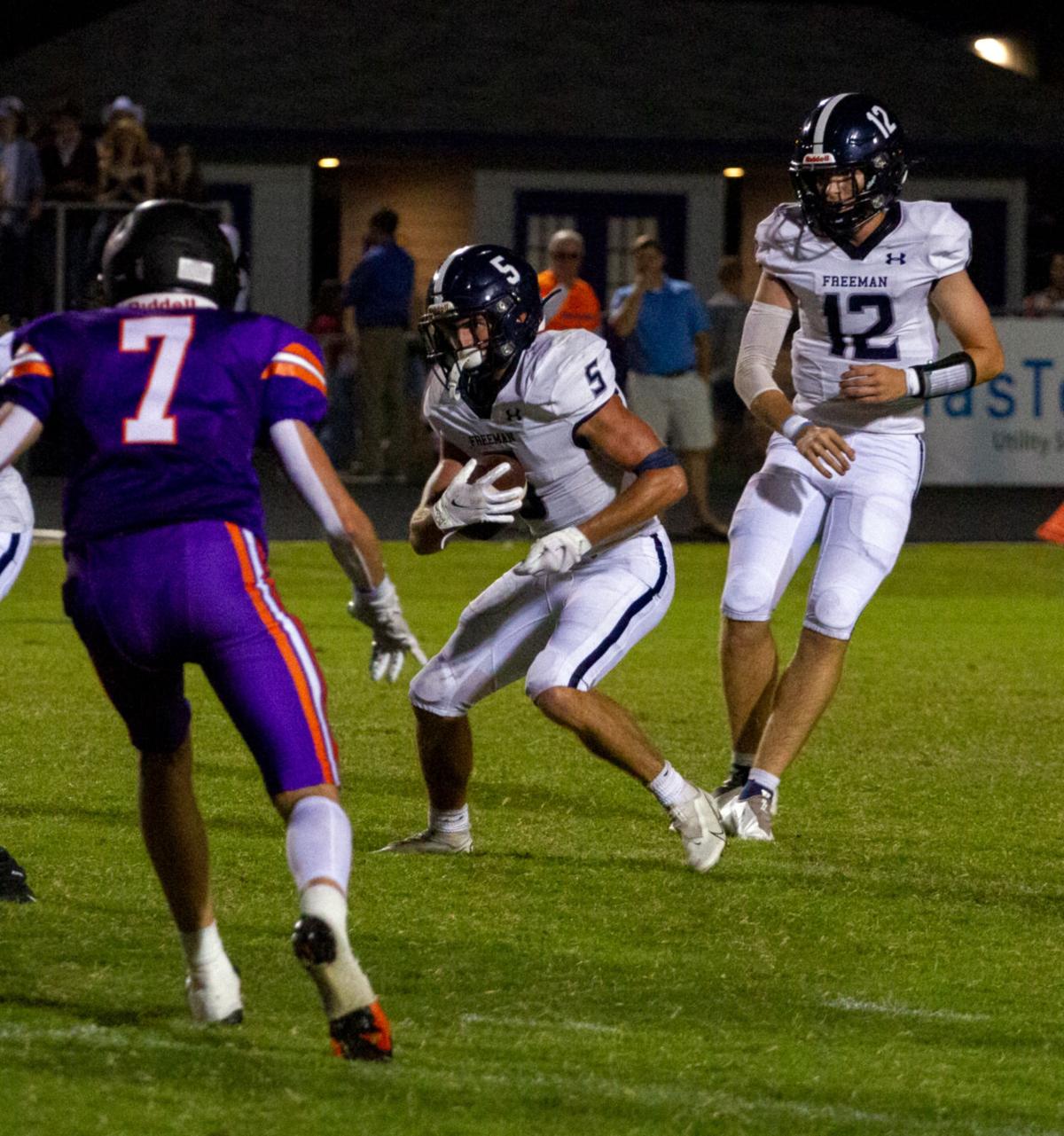 MECHANICSVILLE, Va. — Douglas Freeman running back Bradley Perkins (5) looks for a hole after taking the handoff from quarterback Owen Fallen (12) in the Mavericks' game with host Mechanicsville on Friday, Sept. 10, 2021.

About Varina: The Blue Devils haven’t played since blanking Glen Allen 34-0 in their opener. In that game, junior quarterback Miles Derricott completed 4 of 8 passes for 100 yards and a touchdown. Receiver-safety Kamaree Wells had two catches for 50 yards and a TD plus a blocked punt, which he returned for another score. Cornerback Kenny Faison had two interceptions and ran one back 65 yards to the house. Seniors Carlo Thompson, a big play receiver, and back Curtis Green round out the primary playmakers for a formidable Varina outfit in coach and former player Marcus Lewis’ second season at the helm following a 4-2 spring showing. Look for senior cornerback Anthony Fisher and senior defensive tackle Deandre Crump to make key contributions as well.

About Hermitage: Quarterback Jaylen Burton is a dynamic playmaker with elite accuracy throwing on the run. He’s the talisman for a Panthers outfit that also features junior back Jeremiah Coney (UVA offer) and receivers Breon Gunnell, Chase Rivers and Jhakiri Bolden. Defensively, team speed defines a unit that will show a 4-2-5 look and lean on middle linebacker Brailen Jones to plug running lanes behind big nose tackle Nate James (5-11, 270). Panthers went 6-1 in the spring and lost to Manchester in the region semis. Coach and former player Timothy Jean-Pierre is in his first season at the helm.

What’s at stake: With just one game under the belt for each side, there are still ample unknowns here. Varina moved down to Class 4 this school year, and Hermitage is still in Class 5, so this isn’t as much a battle for regional positioning as it used to be. The winner will have an inside track to local supremacy and a spot among the 804’s elite, but both teams are very good and should be in the fight for playoff positioning late in the season regardless of the outcome here. Hermitage won the last matchup 9-0 Feb. 22. The schools first played in 1965, and the 33-game series has been highly competitive, with Hermitage holding a 17-16 advantage.

No. 10 Douglas Freeman at Atlee, Friday, 7 p.m. (radio: 101.3): This is a clash of two 3-0 teams with plenty of momentum to go around. Quarterback Owen Fallen, running back and 804 Varsity Player of the Week for Sept. 10 Bradley Perkins and receiver Jahrell Horne lead a potent Freeman attack that’s averaging 25 points. The Raiders feature a dynamic rushing attack spearheaded by seniors Caleb Warren and Keith Green. They racked up 316 yards between them in last week’s 27-7 win over Mills Godwin (0-2). Raider Field should be rocking for this one, and points should not be at a premium, although Atlee has only allowed 7 points all season. These teams first met in 1994 and have played every season since sans this past spring. Freeman won the last matchup 21-14 in Sept. 2019 and holds a 16-11 advantage in the series.

No. 2 Manchester at Powhatan, Friday, 7 p.m.: The Lancers (1-1) are led by junior quarterback Cody Shelton and senior running back Ramon Brown (Virginia Tech recruit). Shelton has what coach Tom Hall says might be the deepest and most talented receiving group he’s ever had. Those outside weapons include seniors Cam Sturdifen and Brenden Shelton, sophomores Eric Smith and Kyree Richardson, and junior Tyee Stephens. Defensively, a senior-laden secondary and depth on the line are the the strengths. For the Indians (2-0), senior back Mitchell Johnson and junior quarterback Dylan Trevillian lead a versatile attack in which receiver Ethan Dowdy (6-3, 180) will look to create matchup problems. Defensively, four-year starters at linebacker Chase Gayness and Wyatt Lowe are two of 10 seniors who will see lots of playing time. Mike Henderson’s Powhatan outfit is always disciplined and gritty. Can the Indians keep the Lancers’ playmakers in check? These teams first met in 1980, and the Lancers hold a 5-1 advantage in the limited series. Manchester won the last matchup in the spring 28-23.

Martinsburg (West Virginia) at No. 1 Highland Springs: The Springers (2-1) welcome their second elite out-of-state opponent of the season after losing to Chambers (North Carolina, No. 14 in country per High School Football America) 24-13 to open the season. Highland Springs is No. 131 in those rankings. The Springers are 89-7 in the past seven-plus seasons, including four consecutive state titles from 2015-18. They lost in the state championship game in overtime last season. Martinsburg had a 57-game winning streak snapped last season and was knocked out of the state playoffs in the quarterfinals by COVID. It had won four consecutive Class AAA state titles (eight in the previous 10 years). Look for HSHS sophomore quarterback Khristian Martin to spread the ball to his bevvy of weapons in a high-scoring affair.

Patrick Henry’s Jayden Mines and Hermitage’s Breon Gunnell vie for a pass intended for Mines Friday, September 10, 2021. A penalty was called on the play.

MECHANICSVILLE, Va. — Douglas Freeman running back Bradley Perkins (5) looks for a hole after taking the handoff from quarterback Owen Fallen (12) in the Mavericks' game with host Mechanicsville on Friday, Sept. 10, 2021.