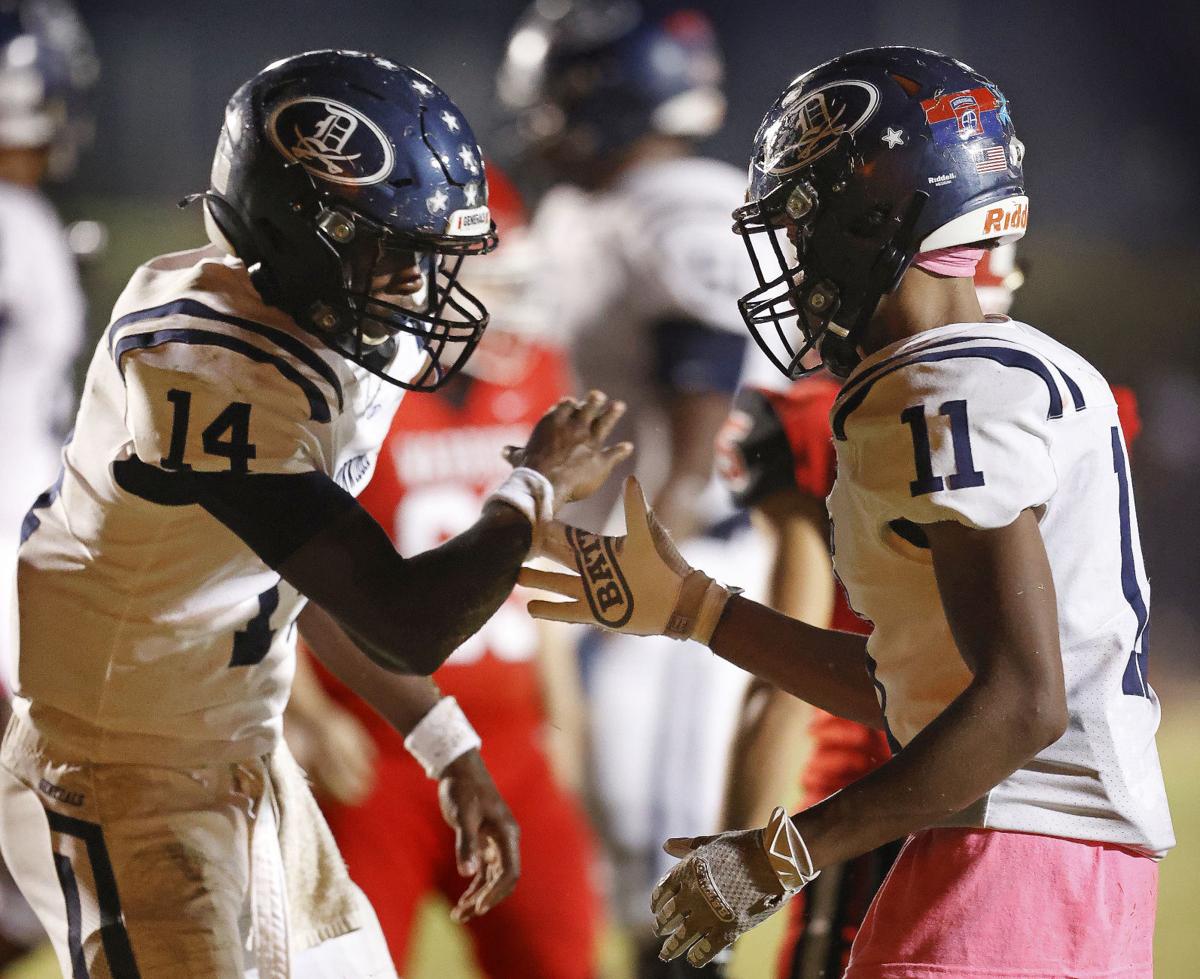 Dinwiddie’s Brenton Hilton celebrated a touchdown with teammate Christian Drumgoole during a victory over Matoaca on Oct. 1. The unbeaten Generals, the top seed in Class 4, Region B, will play against Patrick Henry, 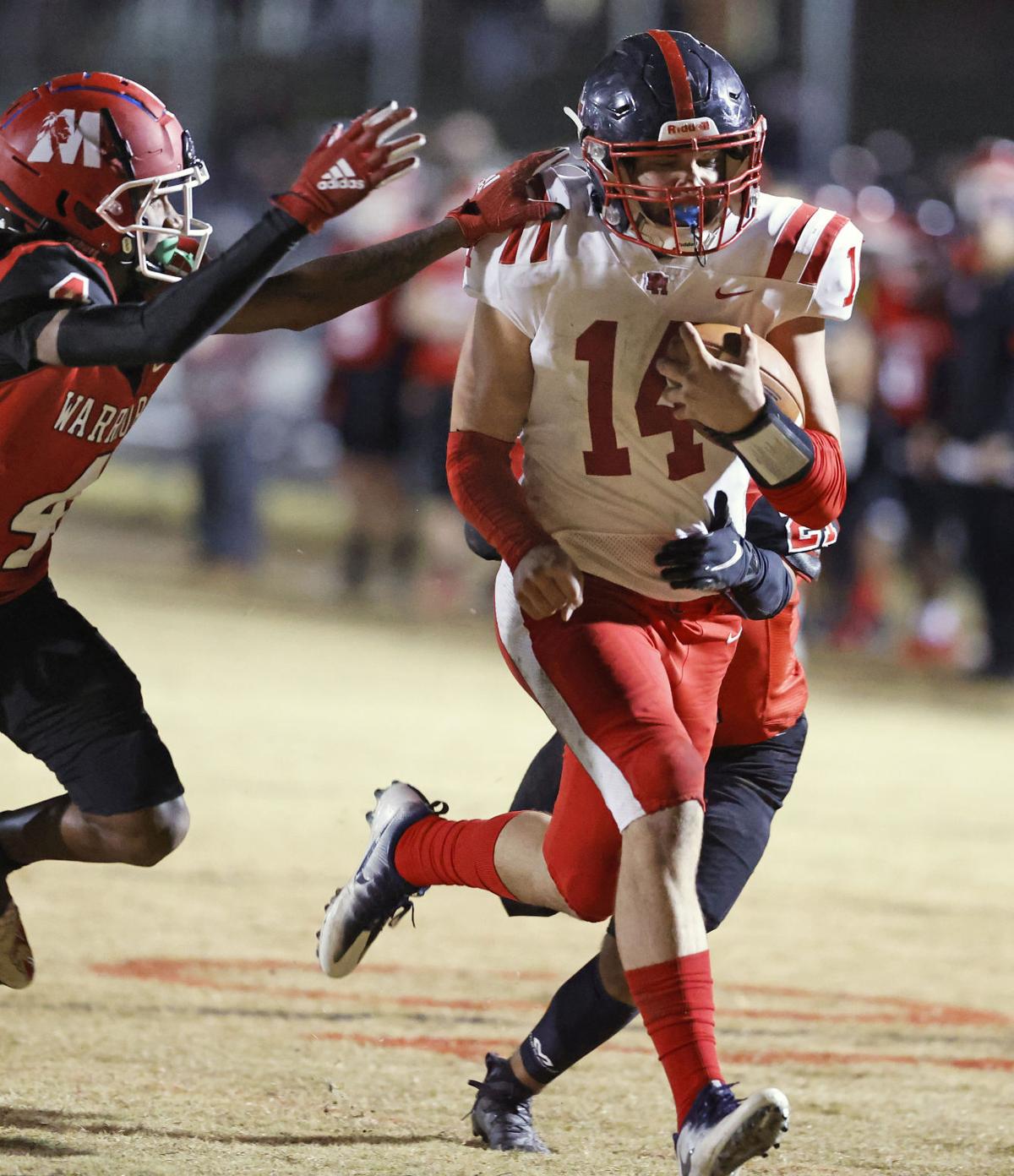 Patrick Henry’s Camden Byrd runs to make the third touchdown for the Patriots as Matoaca’s Bryce Yates, left, and Malachi Cook defend during the Region 4B football quarterfinal at Matoaca Friday, November 12, 2021. 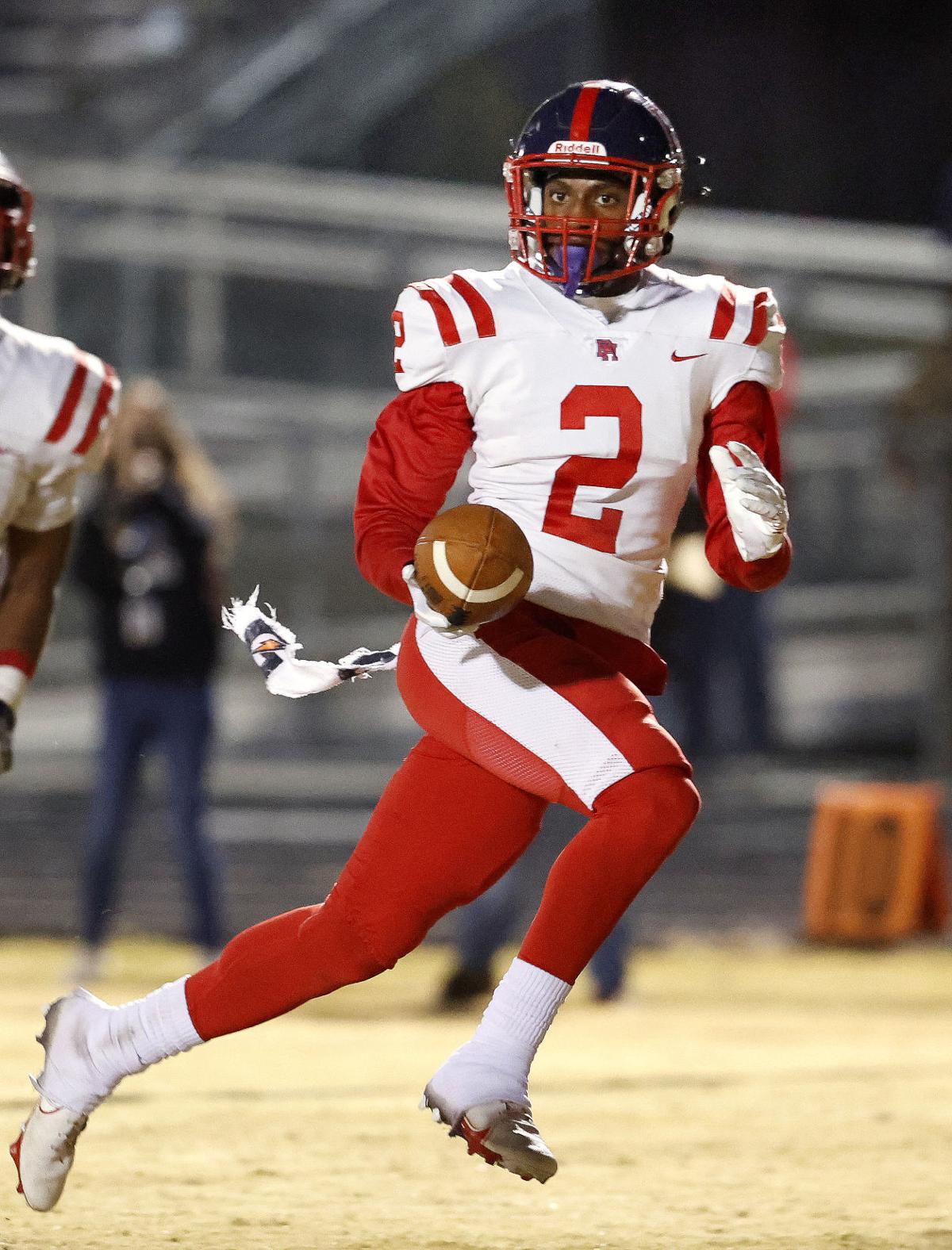 Jayden Mines pulled away for a touchdown during Patrick Henry’s quarterfinal victory over Matoaca last Friday. The Patriots will face top-ranked Dinwiddie in the Class 4, Region B semifinals this week. 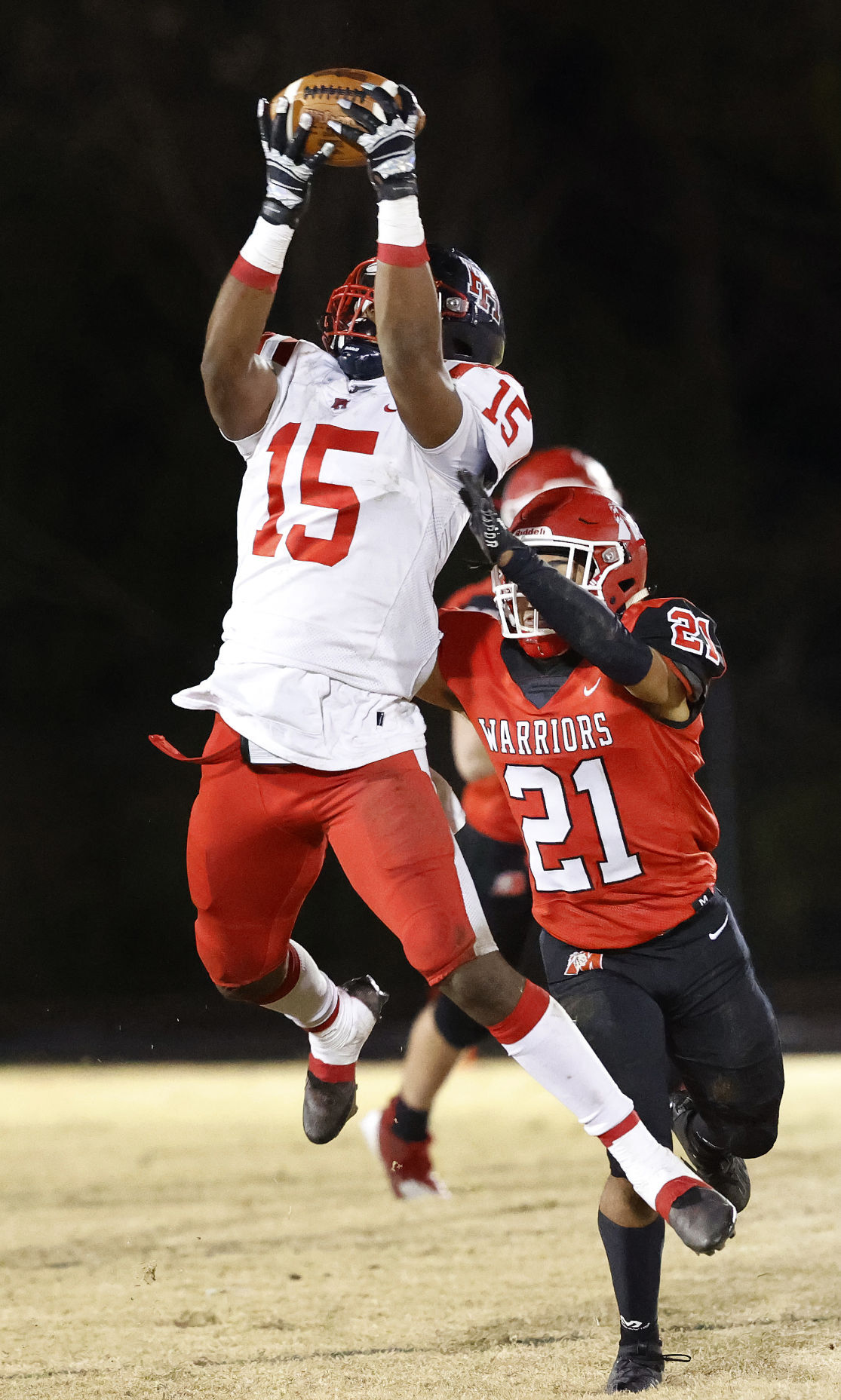 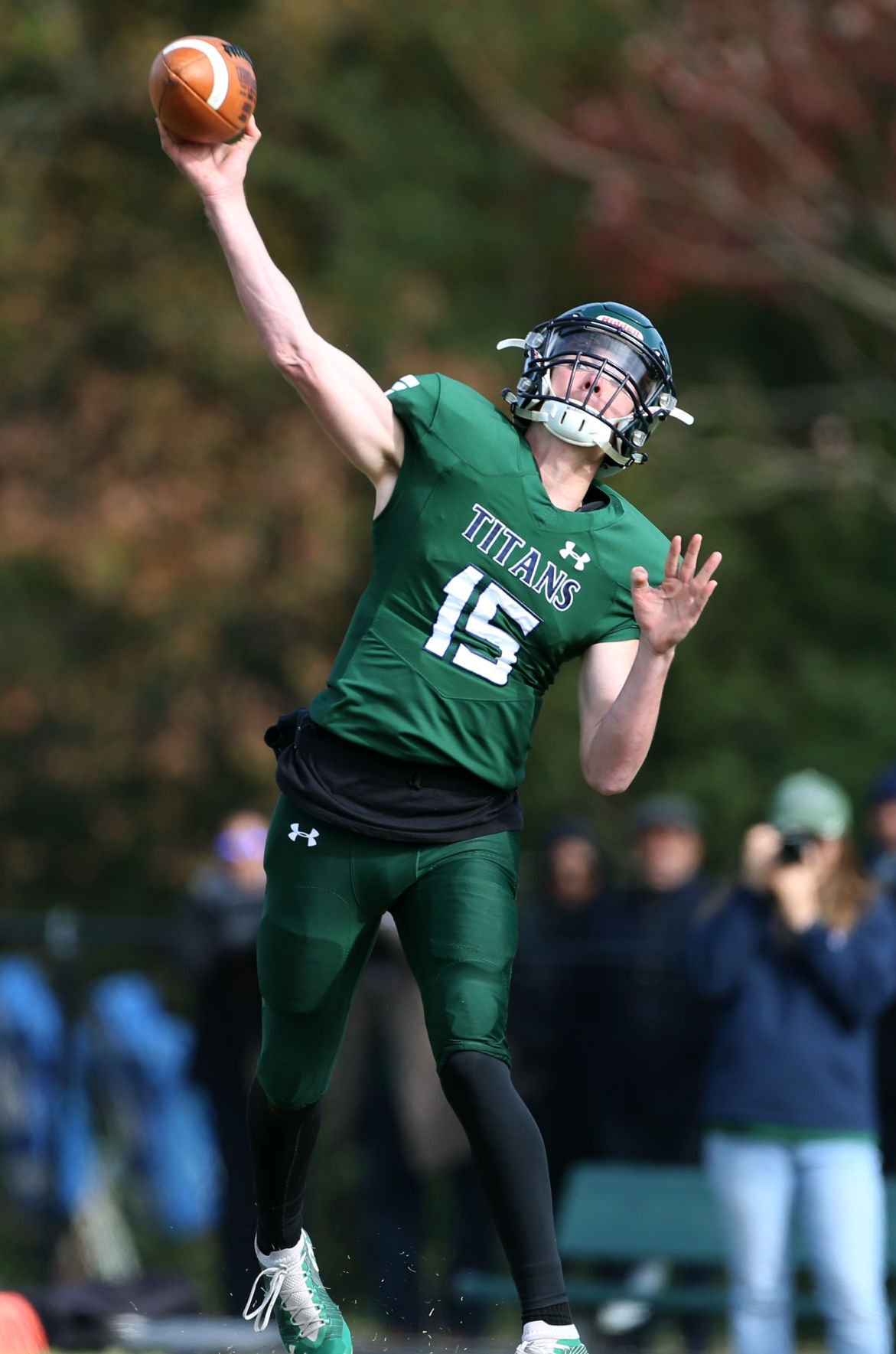 The greater Richmond region entered the first weekend of the high school football playoffs with 23 public and three private schools vying to keep their seasons alive.

After the dust settled, the area was left with 12 public school teams entering the region semifinals this weekend, as well as an intra-city clash for a VISAA title.

Here’s a look back at last weekend’s action, and a look ahead to what awaits those programs left standing.

No. 1 seed Oscar Smith knocked out No. 8 Cosby 77-7 on Thursday. No. 5 James River notched its first postseason win since 2014 as receiver Chris Seward led the way with a pair of touchdown receptions from quarterback Reece Hamilton in the Rapids’ 21-19 victory over No. 4 Thomas Dale.

No. 3 Manchester trounced Ocean Lakes (Virginia Beach) 59-7 behind quarterback Cody Shelton, who accounted for four touchdowns, two apiece on the ground and through the air. No. 2 Western Branch (Chesapeake) beat No. 7 Franklin County 35-27.

So both remaining local teams will play in Chesapeake in Round 2, as the Rapids take on juggernaut Oscar Smith (9-1), the reigning state champs, and the Lancers play the Bruins (9-2). Both games will take place Friday night at 7 p.m.

Western Branch lost 48-0 to Oscar Smith on Oct. 29, and the Tigers’ only defeat this season is to St. John Bosco (California), the No. 3-ranked team in the country.

No. 1 Highland Springs downed No. 8 J.R. Tucker 63-0. No. 2 Midlothian secured the first playoff victory in school history with a 42-13 win over No. 7 Mills Godwin behind 211 yards and two TDs from back Ashby Berry. No. 3 Hermitage avenged an early-season defeat with a 42-7 victory over No. 6 Glen Allen. And No. 4 Douglas Freeman won a 31-26 thriller over No. 5 L.C. Bird behind 228 yards and three touchdowns from running back Bradley Perkins, who added 7 tackles at safety.

This weekend Freeman will head to the East End to face the Springers in the region semis, and the Trojans will host the Panthers. Both games are Friday at 7 p.m.

Hermitage and Midlothian have never met on the football field before, while the Mavericks and Springers have a longstanding series that dates back to 1958. Highland Springs leads 24-21 and won the last matchup, 58-21 in 2016, also a playoff game at Victor W. Kreiter Stadium.

No. 1 Dinwiddie and quarterback Brenton Hilton beat No. 8 Atlee 49-14. No. 3 Varina won a double-overtime thriller over No. 6 Powhatan 28-27 after the Indians went for and missed a do-or-die 2-point conversion to end the second extra period. And No. 5 Patrick Henry upended No. 4 Matoaca 28-25 behind quarterback Jordan Allen, who carried 28 times for 218 yards and two scores while passing for 96 yards and two more touchdowns.

The battle-tested Patriots get a shot at the undefeated Generals in a marquee semifinal tussle. Dinwiddie beat Matoaca 35-14 back on Oct. 1. The Blue Devils will travel to No. 2 King George (9-0-1), who beat No. 7 Chancellor 21-7 to advance. Both games are Friday at 7 p.m.

No. 5 Hopewell is the local standard bearer in 3A, and the Blue Devils impressed with a 54-27 victory at No. 4 Lake Taylor (Norfolk). Quarterback Mason Cumbie rushed for three touchdowns and tossed another two scores to receivers Kevin Hicks and Jamarion Chavis, while backs Kesean Henderson and Kentrell McDaniels had one rushing touchdown apiece.

No. 4 Goochland edged No. 5 Culpeper County 24-23, and will play at No. 1 Meridian on Friday night, which downed No. 8 Armstrong 45-0. The Bulldogs used a 12-yard TD pass from quarterback C.J. Towles to receiver Jason Woodson to tie Culpeper 23-23 with under a minute left, and Tyler Black’s extra point sent Alex Fruth’s Goochland outfit on to the semifinals in dramatic fashion.

No. 2 King William blew past No. 7 Greensville 47-16 on the strength of 298 yards and five touchdowns on just nine carries (yes, you read that right) from All-Metro running back Demond Claiborne, who did not play a snap in the second half.

The four-team state independent school playoff proved the opposite of chalk, as both lower seeds prevailed. Behind its imposing defensive line, No. 4 Benedictine upended No. 1 and previously unbeaten St. Christopher’s 28-14. Leo Boehling ran for a pair of touchdowns, David Ngendakuriyo had a rushing score and Tate Plageman tossed a TD pass to Khamari Veney for the Cadets, who held St. Chris to 154 yards of offense and eight first downs.

On the other side of the bracket, No. 3 Trinity Episcopal scored 28 unanswered points to down No. 2 St. Stephen’s and St. Agnes 35-14. Titans quarterback Jack Toscano completed 9 of 13 pass attempts for 105 yards and a touchdown, while carrying 17 times for 75 yards and another three scores. Back Tre Grant rushed 16 times for 81 yards and a TD, and receiver AK Key caught three passes for 44 yards and a TD.

The Titans will host the Cadets for all the marbles in an all-Richmond area VISAA championship game Saturday at 1 p.m. at Trinity’s Aycock Stadium.

It’s a rematch of the programs’ season-opening meeting, a 27-13 Trinity victory at Henrico High in late August.

A last-second push from Benedictine forced the VISAA Division I championship game into overtime, but a pair of connections from Trinity Episco…

Dinwiddie’s Brenton Hilton celebrated a touchdown with teammate Christian Drumgoole during a victory over Matoaca on Oct. 1. The unbeaten Generals, the top seed in Class 4, Region B, will play against Patrick Henry,

Patrick Henry’s Camden Byrd runs to make the third touchdown for the Patriots as Matoaca’s Bryce Yates, left, and Malachi Cook defend during the Region 4B football quarterfinal at Matoaca Friday, November 12, 2021.

Jayden Mines pulled away for a touchdown during Patrick Henry’s quarterfinal victory over Matoaca last Friday. The Patriots will face top-ranked Dinwiddie in the Class 4, Region B semifinals this week.