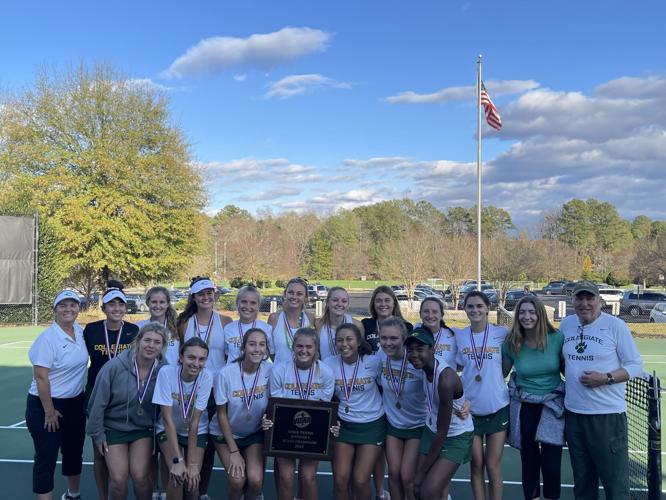 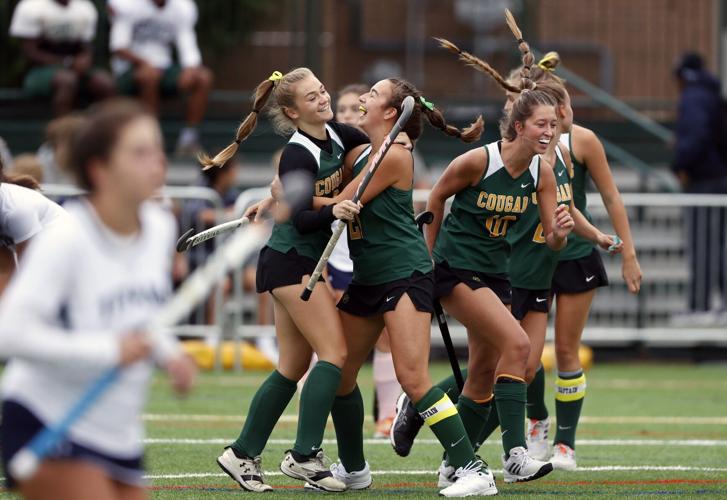 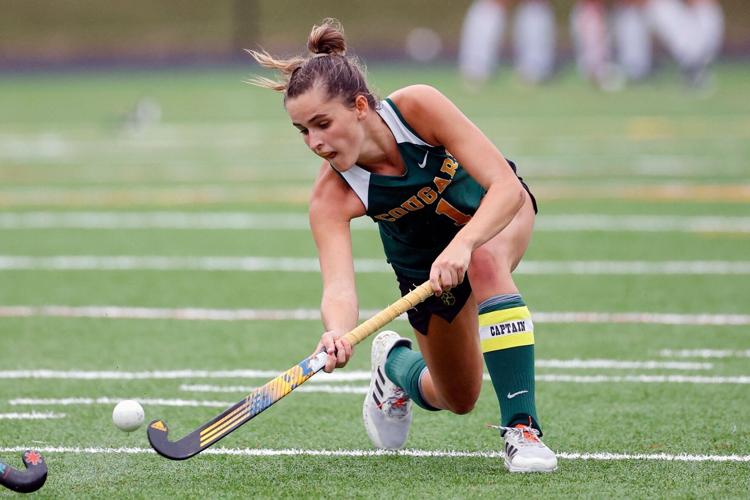 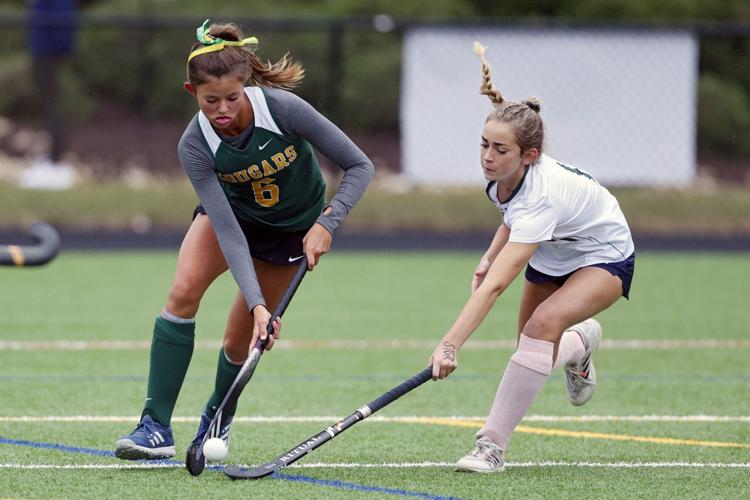 Collegiate's Katherine Martin (6) and Trinity's Ella Shirey (1) scramble for the ball during Tuesday's game at Trinity on October 4, 2022. EVA RUSSO/TIMES-DISPATCH 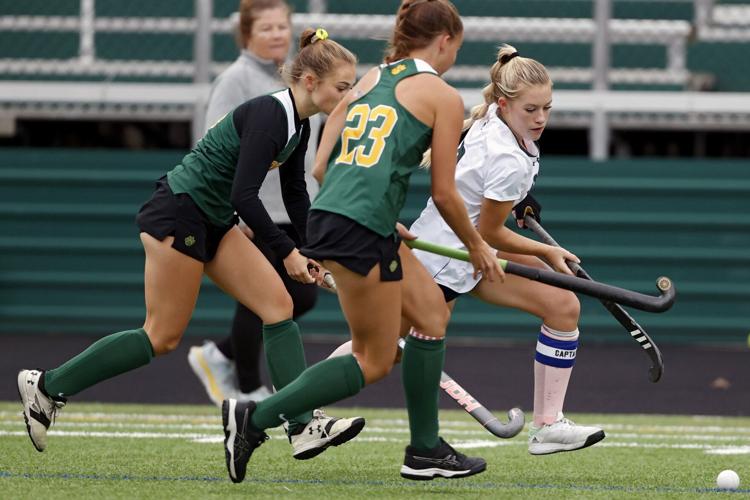 Collegiate's M.K. Brost (23) and Sadie Brooks (2) and Trinity's Olivia Schmincke (8) scramble for the ball during Tuesday's game at Trinity on October 4, 2022. EVA RUSSO/TIMES-DISPATCH 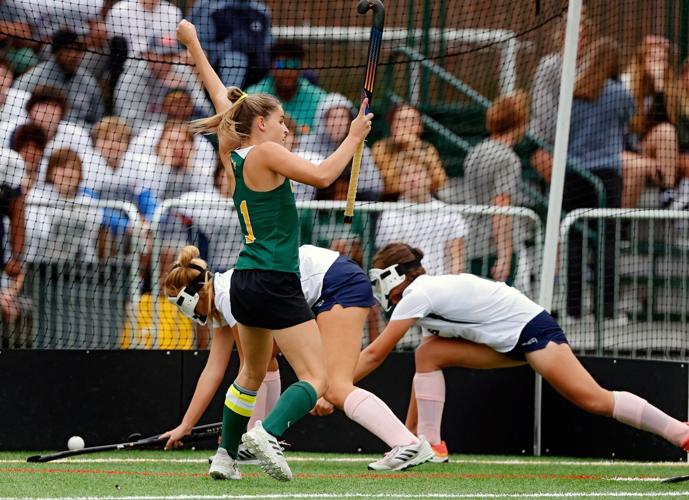 Trey Grant eclipsed the 100-yard mark on the ground and found the end zone, Davion Brown and Isaiah Robinson each had 100-plus yards receiving and a TD and the Trinity Episcopal defense pitched a shutout as the No. 1-seed Titans beat The Potomac School 35-0 Saturday at Aycock Stadium in the VISAA Division I football semifinals.

Grant carried 11 times for 116 yards. Brown and Robinson had three catches apiece for 121 and 110 yards, respectively.

The reigning state champion Titans will host No. 2-seed Benedictine next Saturday in a rematch of last year's title game after the Cadets defeated No. 3 St. Christopher's 20-0.

Collegiate captured its second consecutive VISAA title with a 5-2 win over The Potomac School Saturday, the program's third state championship in four full seasons since coach Allyson Brand took the helm in 2018.

"It's a very unique team, 10 seniors on a squad of 17," said Brand, adding that she's worked with some of the group since they were in seventh grade.

"I knew we had the potential. The challenge this year for us was more the mental side ... making sure that they could play to their ability without the emotions becoming too much of a factor."

Brand said the team did mindfulness work such as breathing exercises together this season, a practice that helped keep them emotionally centered.

The Cougars traveled to Northern Virginia frequently this year for tough matches in which their depth was put to the test.

"I knew if we had any sick players or anything like that this week, I was very comfortable going into my ladder if needed," Brand said.

"The challenge is, how do you keep them all as a team? ... Because the team is so deep, everybody came to improve every day in practice. Because of that, the team as a whole got stronger."

Championship match is scheduled for Saturday, Nov. 19 at 4:30 at the Siegel Center.

With Classes 5 and 6 combining their boys volleyball state championships, four Richmond-area schools advanced to the state quarterfinals Saturday and all came out victorious to set up an all-RVA race for the title in the form of two region final rematches.

Thomas Dale earned a 3-0 win over First Colonial, and will host James River at 6 p.m. in Tuesday's semifinal after the Rapids defeated Indian River 3-1.

Glen Allen downed Norview 3-0, and Deep Run advanced past Granby 3-0 to set up a semifinal meeting between the Jaguars and Wildcats on Tuesday.

The state championship match is scheduled for Saturday, Nov. 19 at noon at the Siegel Center.

Monacan defeated Warwick 3-2 on Saturday to advance to Tuesday's semifinals, where the Chiefs will play Maggie Walker after the Green Dragons downed Great Bridge 3-0.

The Class 4 semifinals are Tuesday at the higher seeds, and the championship match is set for Saturday Nov. 19 at 10 a.m. at the Siegel Center.

The moment of truth had arrived.

Dinwiddie advances to state championship with muddy rout of Warwick

By the time the final whistle blew Saturday, the mud itself appeared to have taken on a navy hue.

"We have a formidable opponent, we know they're going to come down here and play their best football. We have to match that intensity and that energy."

As Dinwiddie preps for state semifinal, military connections continue to drive the Generals

A Dinwiddie flag once flew over the sands of Afghanistan, and the military has long been a foundational component of the Generals' program under head coach Billy Bills.

It’ll be the first trip to cross country nationals for the recent Georgetown pledge.

It was just a matter of time.

Talon, 16, is the first Chiefs golfer to earn the top honor since Jackie Beers was recognized in 2000 and 2001, when the All-Metro golf team was established.

Sidney Walters had already been a part of two state-championship teams at Deep Run, once as a freshman in 2019 and then as a junior last year.…

Five players who have played at five World Cups

Collegiate's Katherine Martin (6) and Trinity's Ella Shirey (1) scramble for the ball during Tuesday's game at Trinity on October 4, 2022. EVA RUSSO/TIMES-DISPATCH

Collegiate's M.K. Brost (23) and Sadie Brooks (2) and Trinity's Olivia Schmincke (8) scramble for the ball during Tuesday's game at Trinity on October 4, 2022. EVA RUSSO/TIMES-DISPATCH