Highland Springs defends No. 1 ranking, slides by No. 6 Patrick Henry in second half
0 Comments
Share this
1 of 5 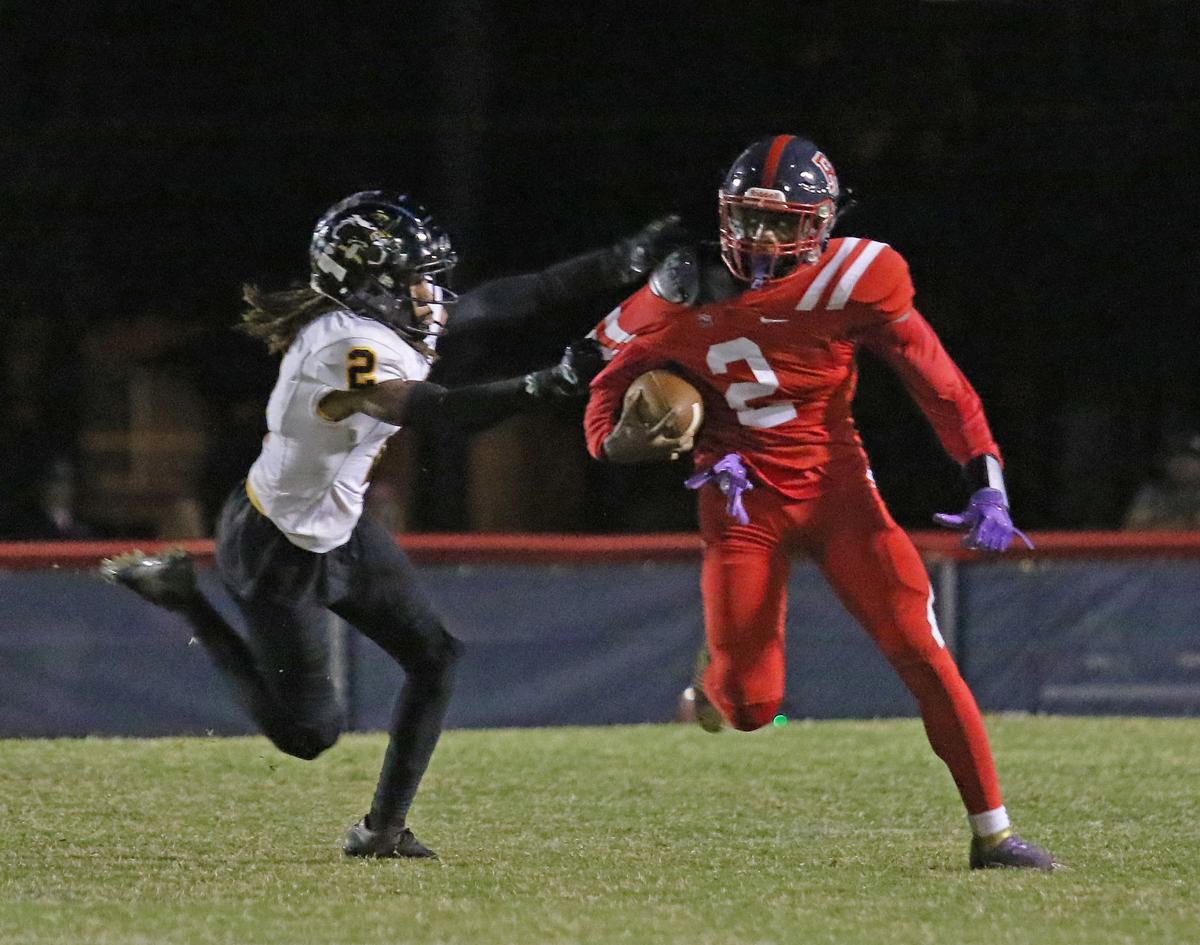 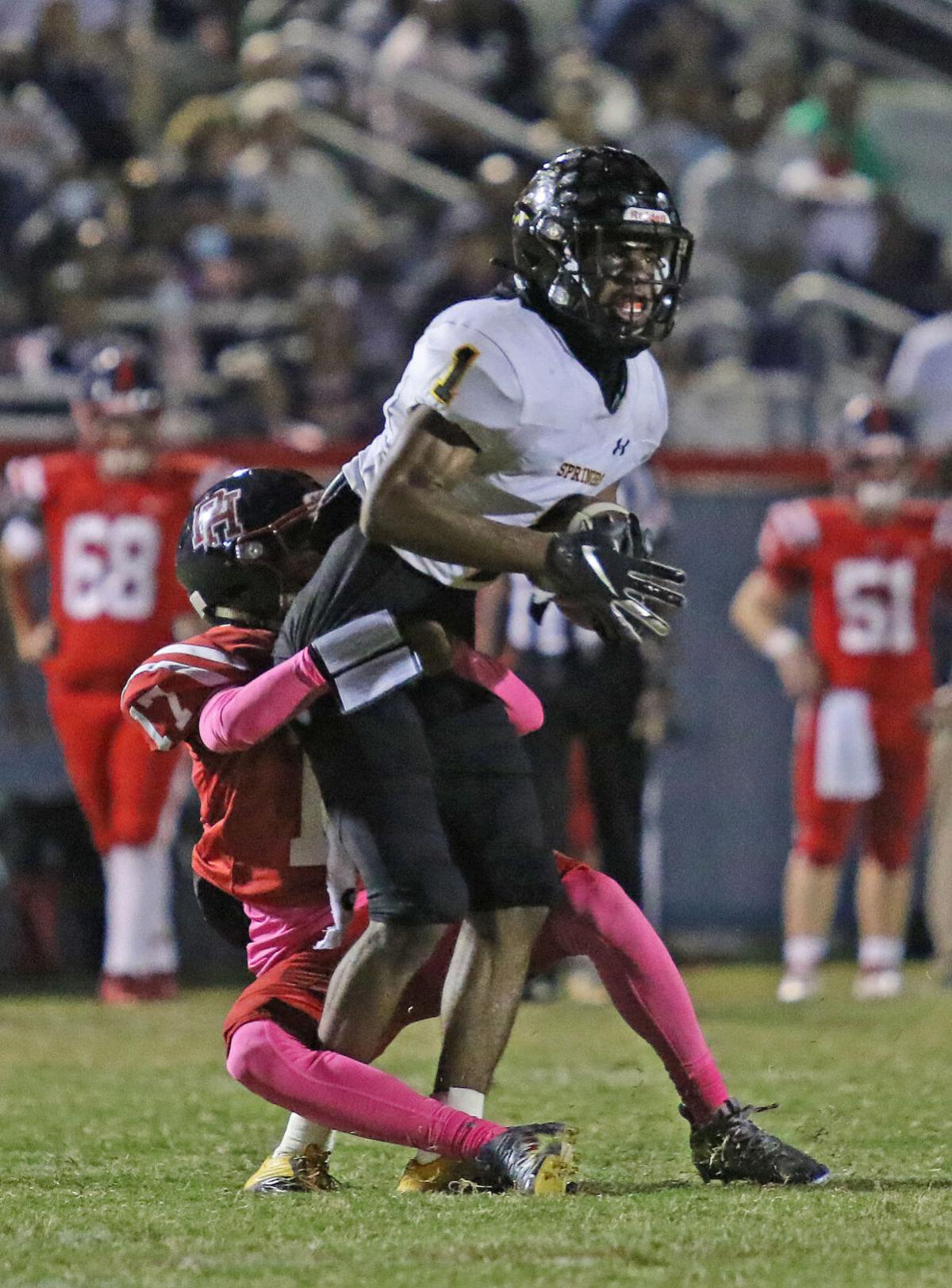 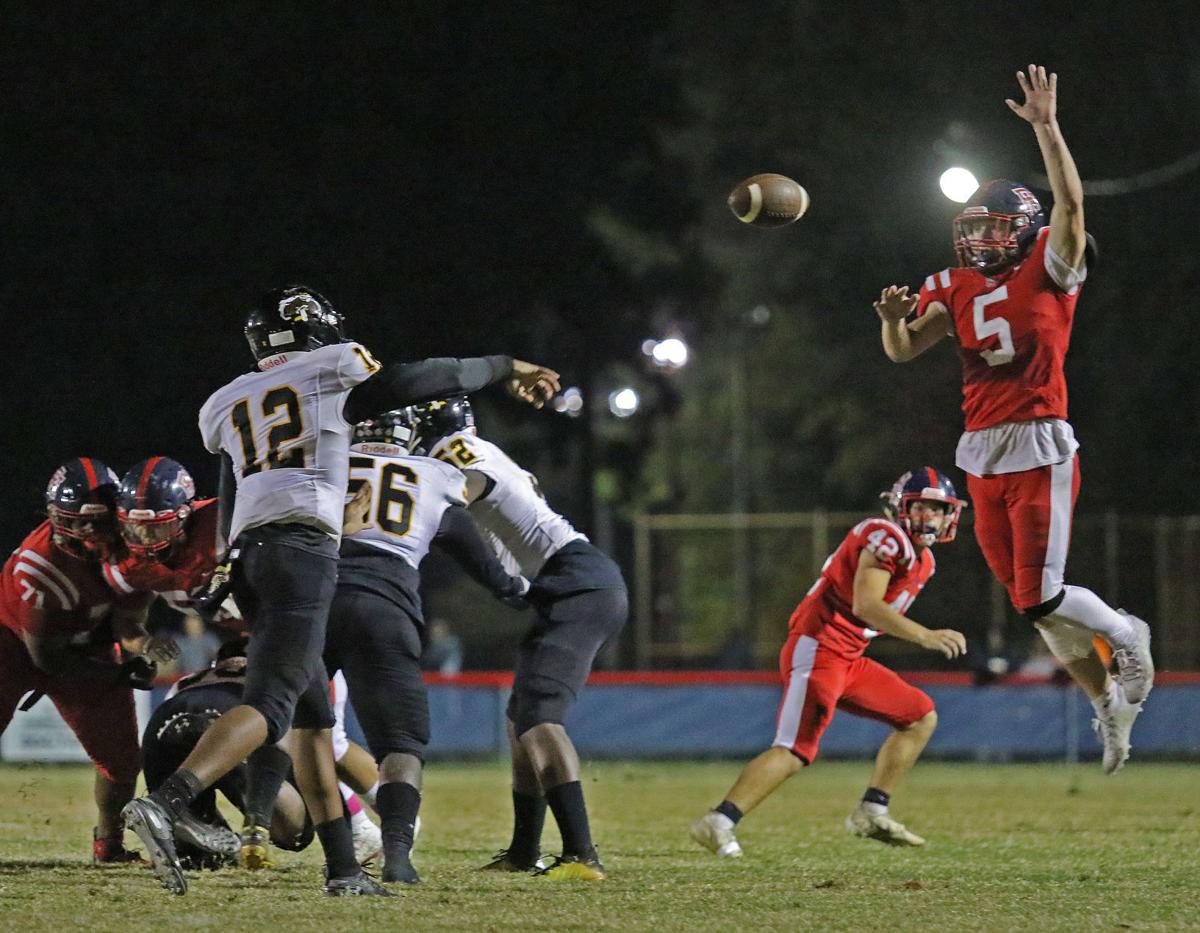 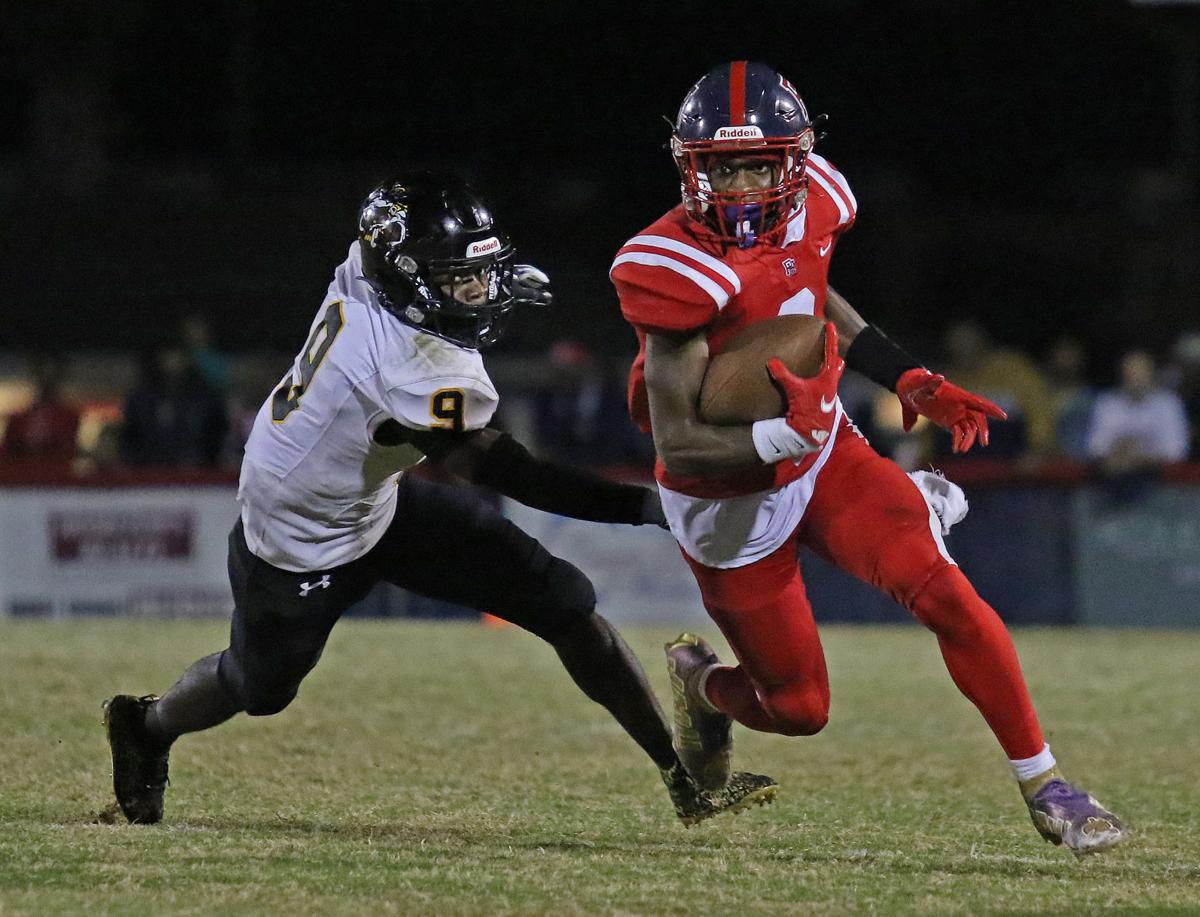 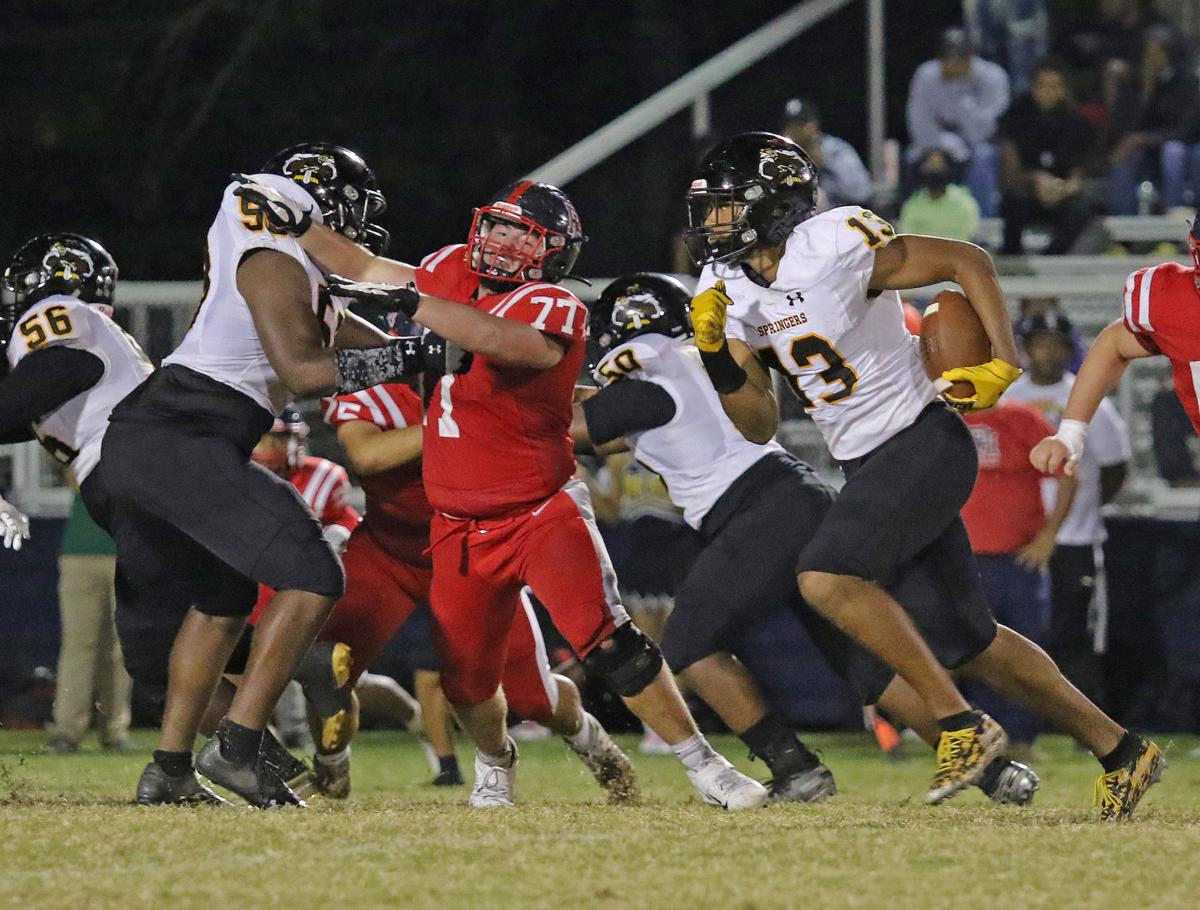 It was the old post route, basic as it gets.

As he read the secondary, found a seam between defenders and slipped into the open, quarterback Khristian Martin sighted him and drilled a perfect spiral into his outstretched hands.

There was nothing but green between him and the end zone.

It was another big play — this one on fourth-and-10 from the Patrick Henry 35 — that the Springers, down 14-13 a half-minute before halftime, employed en route to a 41-28 victory over the Patriots under the Friday night lights in Hanover County.

“That credit goes to Michael Hodge,” Highland Springs coach Loren Johnson, whose squad, No. 1 in The Times-Dispatch Top 10, improved to 4-2. “Our kids see things on the field. Mike Hodge ran off the field and said, ‘Coach, we can run this play.’ Then, he ran back on the field. The ball was supposed to go to him.

“The quarterback threw it to Latrell Sutton. That says a lot about the unselfishness of our team and how well we can play when we play as a unit.”

The play-as-a-unit concept was the Springers’ modus operandi on this cool, clear evening.

Twice in the first half, the No. 6 Patriots (4-2) stung them with quick-strike touchdowns: Jayden Mines’ 79-yard kickoff return and Camden Byrd’s 18-yard interception return after picking off a pass batted into the air at the line of scrimmage by teammate Gregory Foster.

Twice they trailed, the first time after Byrd’s TD and a 2-point Jordan Allen-to-Mines conversion and the second when quarterback Allen raced 35 yards for a touchdown and Richard Crabbe kicked the extra point to conclude the Patriots’ initial second-half drive.

Down 21-20 midway through the third period, the Springers scored three straight times (runs of 5 yards by Takye Heath, 12 yards by Hodge, and 7 yards by Marcel Fleming) after short-field drives to put the game away.

“Football is four quarters,” Johnson said. “We’re going to play four quarters of football. We buckled down and focused and got where we needed to be.”

“We knew we had to stop the heavy run and their regular plays,” said Mario Harris, a 6-1, 270-pound senior defensive tackle. “And we couldn’t give up any mistakes. We’re very disciplined. We took the keys from our coaches that they’ve been teaching us all week. And we had to finish it.”

Martin completed 7 of 16 passes for 92 yards and one touchdown. Jakyre Henley completed 5 of 6 for 64 yards. Quanye Veney accounted for 89 yards on seven catches, several of the acrobatic, I-can’t-believe-my-eyes variety.

“We knew they’d come out and give us their best shot, offense and defense,” said Veney of the Patriots. “We knew they’d have the crowd behe ind them. We knew they’d run tricky plays. We just stayed to the script and did what our coaches told us to do.”