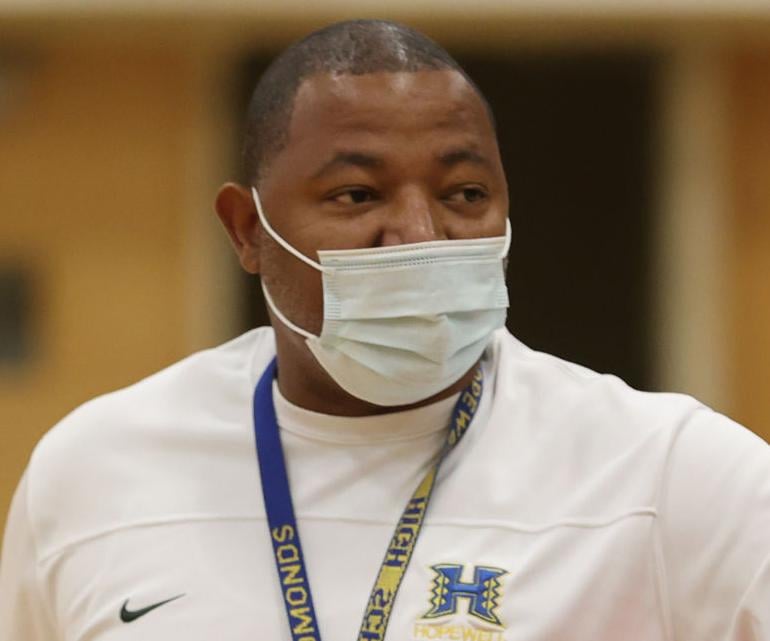 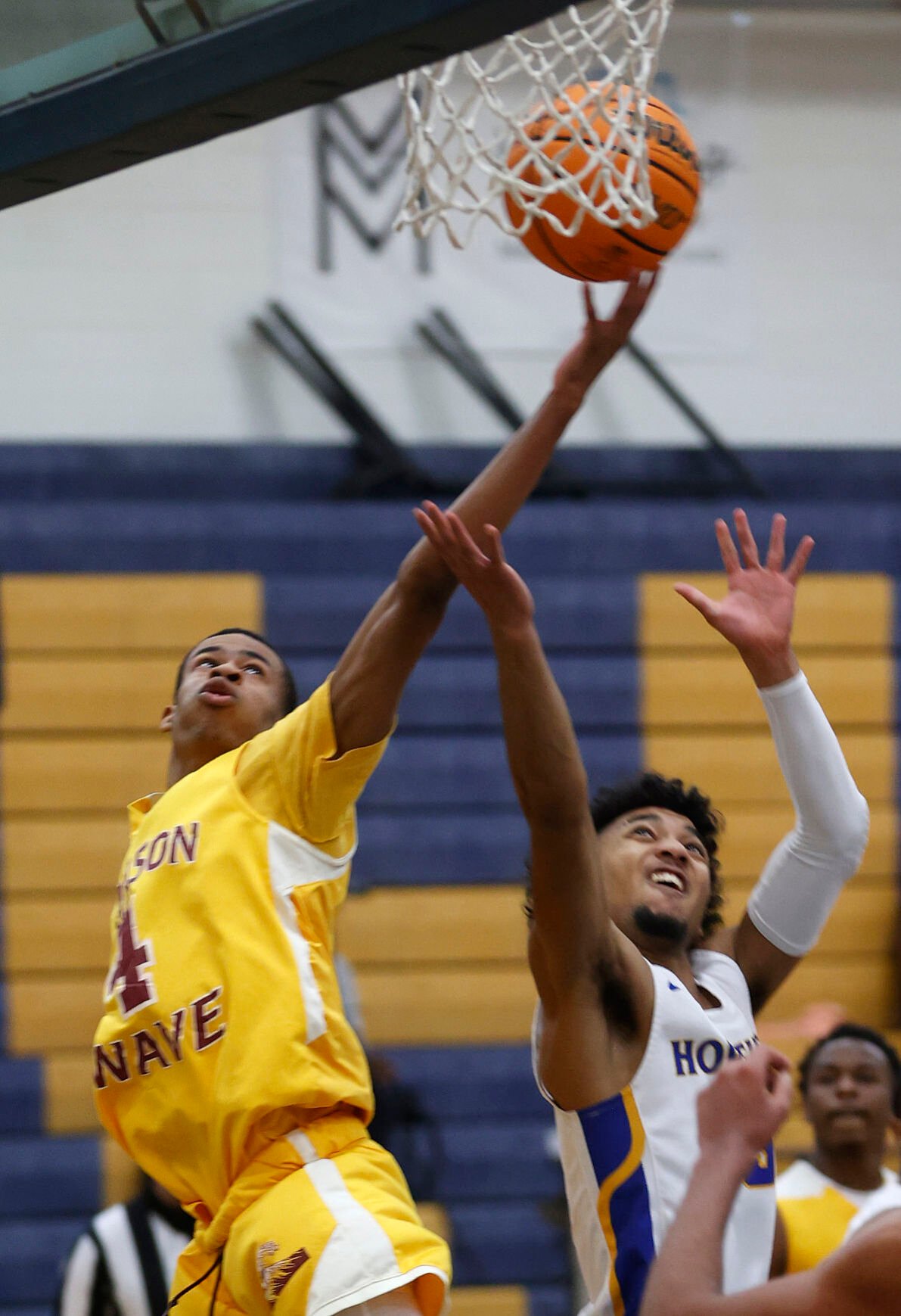 James Pelham (right), seen in Hopewell’s Region 3A title win over Petersburg, is one of five Blue Devils who shoot at least 35% from 3-point range. Hopewell can collect its second state championship with a win Saturday night.

High above one of the baskets at Hopewell High School, attached to the basket’s supports, is a banner that has become a little wavy with age.

It denotes the Blue Devils’ boys state basketball championship in the old Group AAA in 1972, the lone time the tradition-rich program won the title.

The Blue Devils will get another chance Saturday. The Region A champs (7-0) will make a trek that’s a little more than five hours to southwest Virginia to play for the Class 3 state title at Region D champion Abingdon (14-1), which hasn’t been in a boys state championship basketball game since 1965. The game, scheduled for 6 p.m., will be streamed on the NFHS Network (nfhsnetwork.com), which requires a subscription.

“I glance up at [the banner] every once in a while,” Hopewell coach Elvin Edmonds III said. “But it was so long ago. We’re kind of hoping to hang up some new banners.”

It may not seem that long ago to standout guards and cousins Elvin Edmonds IV and James Pelham. They have a family resource from the 1972 team: their grandfather, Leon Winfield.

Winfield’s daughter and son are Edmonds’ mother Jackie and Pelham’s father James, a former star at Hopewell and now an assistant coach.

Winfield, an all-state guard, starred with center Willie McCray on the 1972 team that beat West Springfield 63-55 for the crown. McCray set a state tournament record with 27 rebounds in the final.

“It would mean a lot [to win a state title],” Elvin IV said. “We’ve been working out since June and July, not even knowing if we were going to have a season. We just stayed in the gym. I’m just glad it’s finally paid off and we get a chance to show what we can do.”

This Hopewell version has eight seniors, presses, plays fast and pulls the trigger on a lot of 3-pointers. Edmonds gives the green light to his son, the school’s all-time leader in made 3s, Pelham, Cartier Strickland, Lamonta Ellis Jr. and Cameron Mise. All shoot at least 35% from behind the arc.

The Blue Devils made 12 treys in Wednesday’s 71-44 semifinal victory over Independence (Ashburn). Edmonds IV, who scored 30 points in each of the past two playoff games and broke the elder Pelham’s school scoring record in the process, had five 3-pointers. Averaging 26.7 points, he has 1,642 points during his career.

“I think their strength is their [pressure and zone defenses],” Coach Edmonds said. “They’re all over the place.”

Thacker had 22 points and Hungate 20 in a 58-55 victory over Liberty Christian in the other state semifinal. Ramsey had 14 points and 13 rebounds.

Hopewell doesn’t have a regular taller than the 6-4 Ellis. Edmonds, though, doesn’t plan on changing his man-to-man pressure defense.

“We try to go zone some, and it looked so terrible in practice I said, ‘Well, it’s too late to be trying something different,’” Edmonds said. “The guys thought I was speaking French to them trying to run a zone.

“We’ve just got to make sure [Ramsey] doesn’t get as close to the low box as best as possible without fouling. That’s his sweet spot, so we’ll try to keep him off of that.”

James Pelham (right), seen in Hopewell’s Region 3A title win over Petersburg, is one of five Blue Devils who shoot at least 35% from 3-point range. Hopewell can collect its second state championship with a win Saturday night.