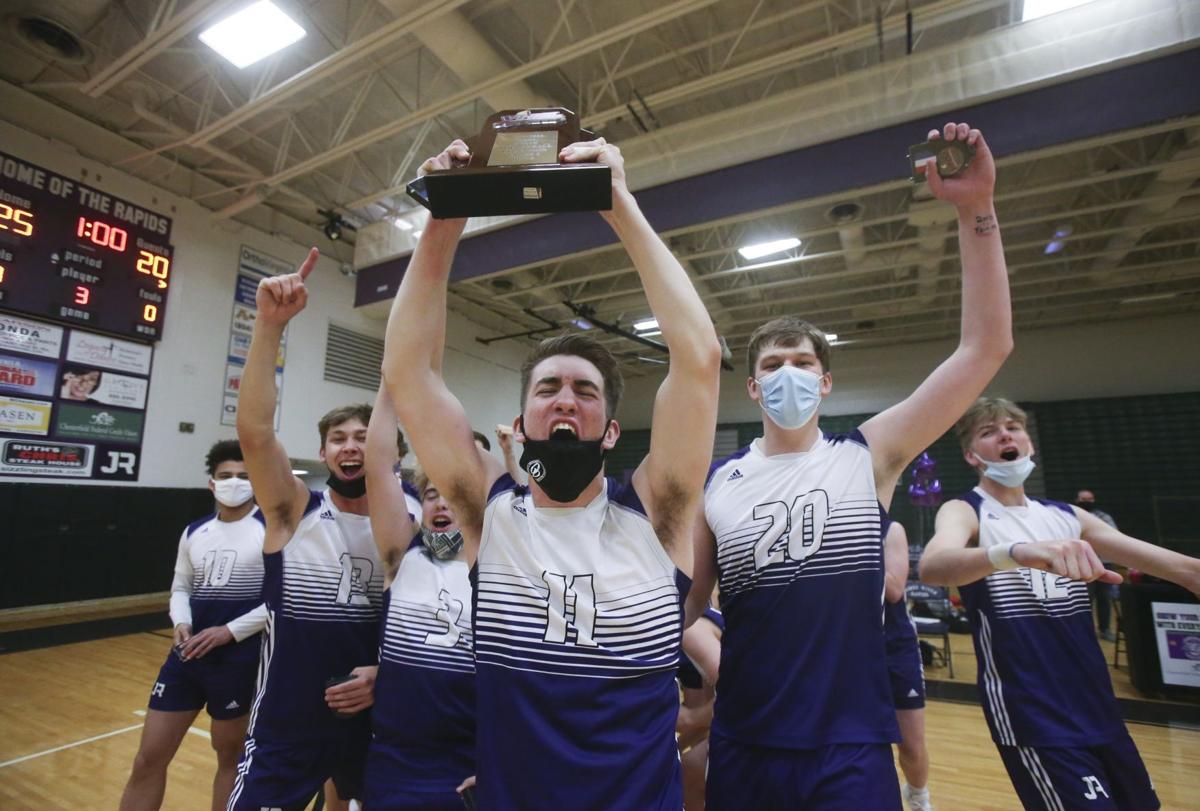 James River’s Connor Pinney (11) hoists the Class 6 boys volleyball trophy with his teammates after the Rapids defeated Thomas Dale in three sets at James River High School. The state championship was the Rapids’ third in a row and their seventh overall. 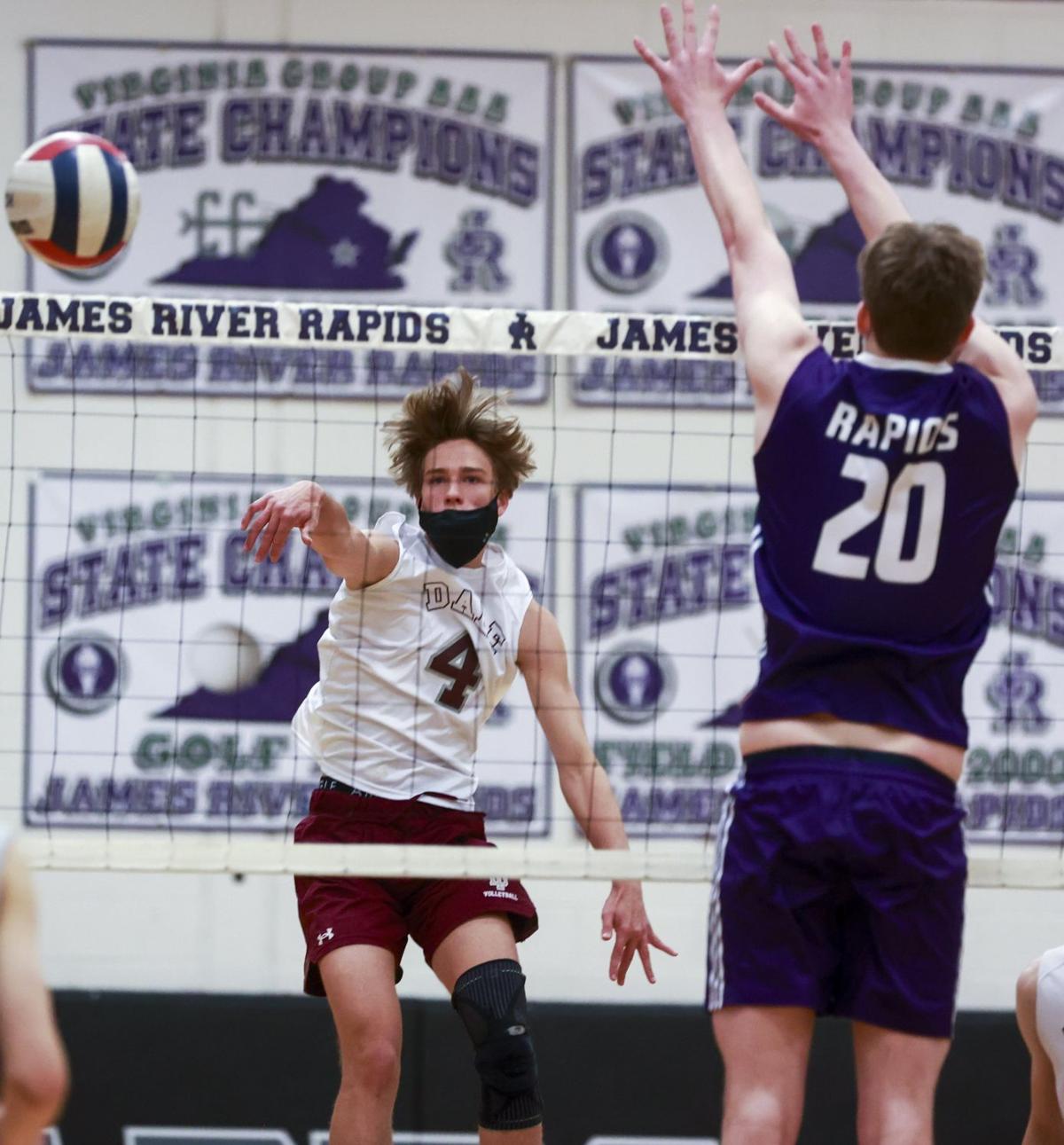 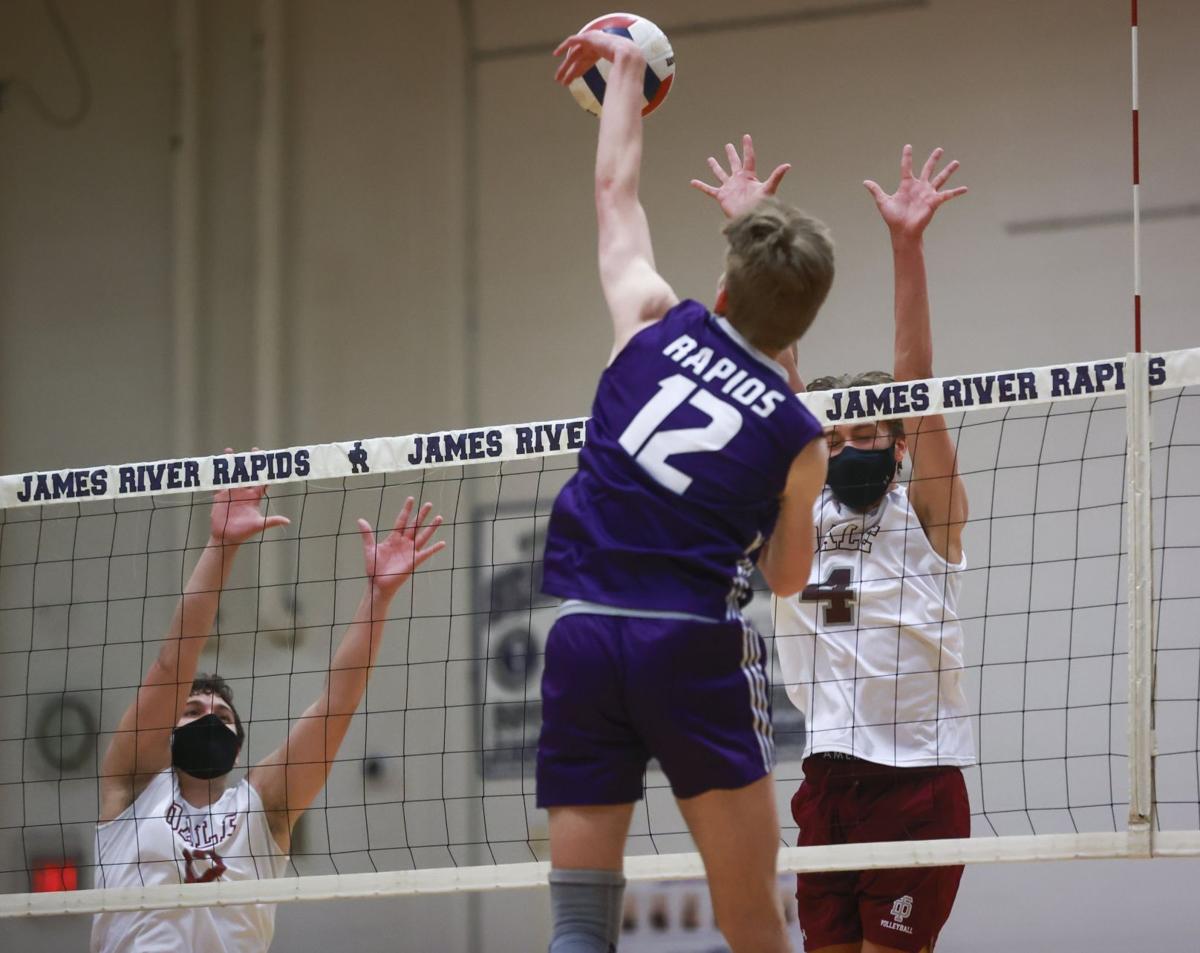 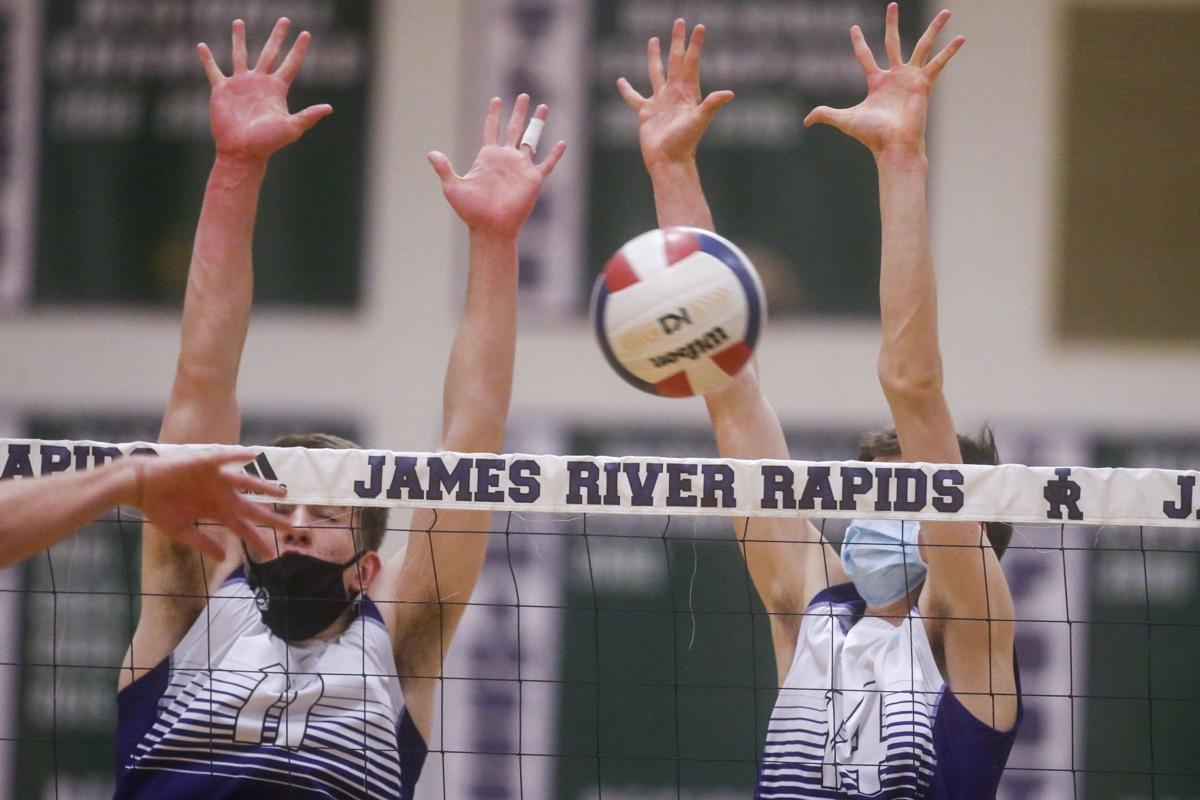 Grubbs’ text was a simple one: He promised Blankenbecler he wouldn’t lose another game in his high school career.

“It felt amazing to go out a winner and even better to do it against Thomas Dale,” Grubbs said after his seven-kill outing against the Knights.

James River (15-0) completed its first undefeated campaign under Blankenbecler. The Rapids came just short of the feat in the 2019 title run, when they lost just one game in the regular season.

“Winning a state championship, you don’t always have to be undefeated, but we knew with COVID, being a shortened season, we had to take advantage of every single game,” Blankenbecler said. “It just so happened, the regular season was over and we were like, ‘Oh, man, we’re undefeated. Now, we have to go undefeated to win a state title.’”

Senior setter Connor Pinney said it’s “amazing” to win a third consecutive title, but he added the team has overcome many obstacles throughout the season. Pinney logged 29 assists in the state championship-winning performance.

“We were battling with COVID, trying not to get COVID, injuries and everything like that but we powered through the season,” Pinney said. “We knew we were going to have a tough time coming in here playing those guys, but I’m very proud of everybody.”

The Knights hung close with the Rapids in the first set after James River opened the match on a 6-1 run. Thomas Dale closed the gap in the set, using timely hitting and a few errors from the Rapids, tying the match at 13.

Thomas Dale led by as many as 3 points late in the set before James River took advantage of a serve error and an attack error from the Knights, adding a block from junior Drew Barfield and Pinney and an ace from senior Mac Swineford to take a 1-point lead.

The 4-point swing forced a timeout from Knights coach Josh Forbes, but they never led again in the opening set.

“[The] slow start in the first set really got the jitters out, we just started doing a little bit of what we wanted to do, coming in with the game plan.” Forbes said of the first set. “We couldn’t string it all together, they pass great and they put pressure on us. … it was just us executing and lack thereof.”

Blankenbecler said the Knights have given his teams fits in the first meeting of a season in the past, so he knew the first set was critical.

“They’ve beaten us multiple times the very first time they played us, so we knew coming in we had to come out to a good start, the first set was a battle and we kind of just persevered through the second and third set,” Blankenbecler said.

James River took control in the second set as Barfield recorded four of his team-high nine kills. Grubbs ended the frame with a block, giving the Rapids a 2-point advantage.

The third set mirrored the second, as the Rapids maintained control and ended the match on a Thomas Dale service error.

In a year of uncertainty, Forbes said he hoped volleyball served as an outlet for his team.

“It’s been a tough year for everybody and volleyball is hopefully the net beacon of hope and happiness for these guys,” Forbes said. “At the end of the day, that’s the most important thing.”

James River’s Connor Pinney (11) hoists the Class 6 boys volleyball trophy with his teammates after the Rapids defeated Thomas Dale in three sets at James River High School. The state championship was the Rapids’ third in a row and their seventh overall.