Denny Hamlin poses with the trophy after winning the NASCAR Cup Series auto race at Talladega Superspeedway on Sunday, Oct. 4, 2020, in Talladega, Ala. (AP Photo/John Bazemore)

Denny Hamlin admitted that going for a Sunday drive at Talladega was “agitating.”

“I hate it,” he told reporters after Sunday’s race at Talledega. “It’s the game. I mean, when someone lays out all the rules of the game, you got to figure out what is the best way to win.”

The Manchester High graduate’s strategy wasn’t necessarily winning. After misfortune and missteps cost him in the first four races of NASCAR’s Cup Series playoffs, Hamlin’s plan was focused more on collecting points to advance to the next round of the playoffs.

So he opted to ride around in the back for most of the race, trying to steer clear of the multicar wrecks that are inevitable in the pack racing at the 2.66-mile track. The attrition eventually put him in position in the third overtime to claim his seventh victory of the season, automatically advance to the round of eight in the playoffs, and make up for some of the frustrating circumstances of the previous races.

“Certainly, yeah, [this] makes me feel a little better,” said Hamlin, who tied his childhood idol, Bill Elliott, with his 44th career win. “The odds are starting to even out a little bit.”

Hamlin was strong in the first four playoff races but was hampered by a variety of issues: trouble getting to pit road, a speeding penalty on pit road, a prerace inspection failure, and an untimely caution.

Hamlin went into Sunday’s race figuring he needed to earn about 20 points at Talladega and this week’s Roval race at Charlotte to lock up a spot in the final eight. He led early but came out of a pit stop in fifth, so he dropped to the back and “just kept watching as the wrecks were happening, kind of counting points.”

He still was outside the top 20 just before the first overtime. By the third overtime, he had moved up to second, and he and crew chief Chris Gabehart changed plans and went for the win after figuring they were almost certainly into the next round on points.

“Certainly in the situation we were in, at the drop of every caution where a new scenario arose, there was just never a time where the reward was worth the risk,” Gabehart said. “We just rolled around at the back until it was time to roll the dice, see how we turned up. Let guys beat themselves, so to speak, which fortunately for us — I don’t want to say fortunately — but some of the playoff contenders did, which made our path a little bit more obvious.”

The way the race ended put a spotlight on NASCAR’s yellow-line rule. To avoid cars that had tangled and were coming down on him on the final turn, Hamlin took his car below the double yellow lines that serve as out of bounds at Talladega and Daytona.

The rule says that if in NASCAR’s judgment a car’s left-side tires go beneath the double yellow lines in an effort to improve the car’s position, it will be black-flagged. If in NASCAR’s judgment a car forces another car beneath the lines, the forcing car will be black-flagged. Joey Logano twice was penalized for forcing drivers below the lines during the race.

Scott Miller, NASCAR senior vice president of competition, said the rulings were “fairly clear-cut” and said the rule needs to stay in place to avoid even more wrecks.

Denny Hamlin poses with the trophy after winning the NASCAR Cup Series auto race at Talladega Superspeedway on Sunday, Oct. 4, 2020, in Talladega, Ala. (AP Photo/John Bazemore) 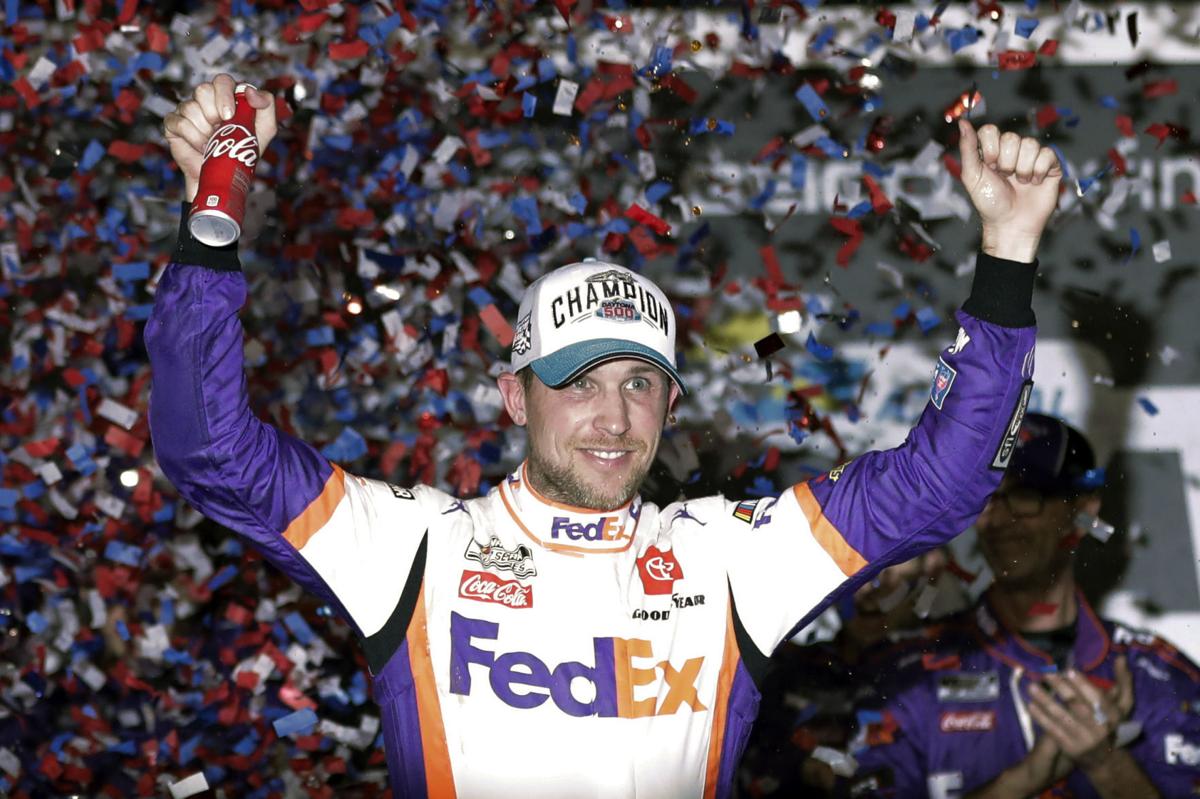 Denny Hamlin shifted from collecting points to grabbing the victory on Sunday.