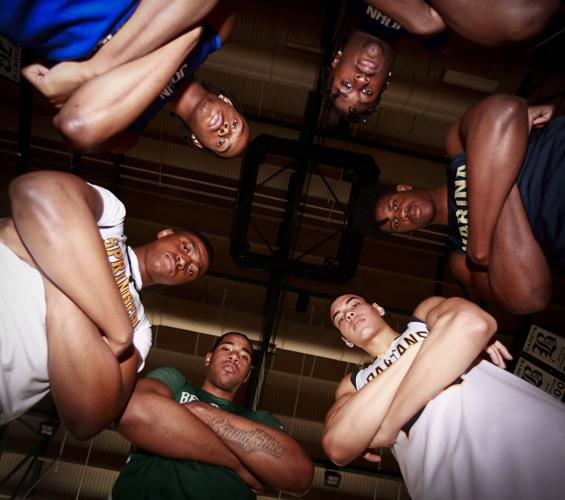 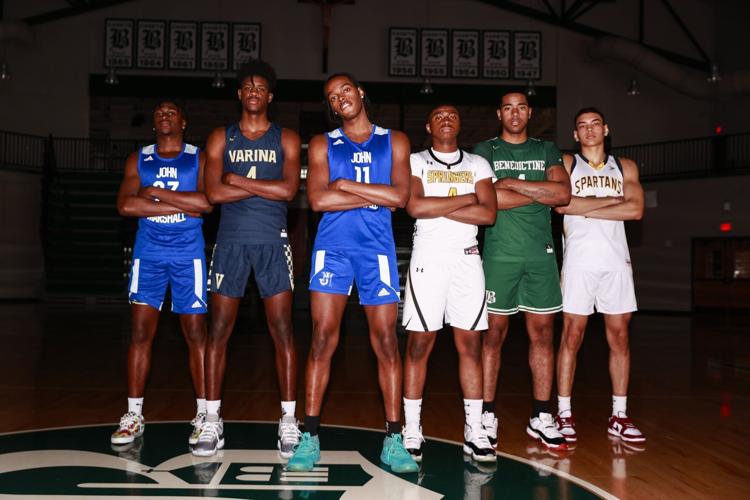 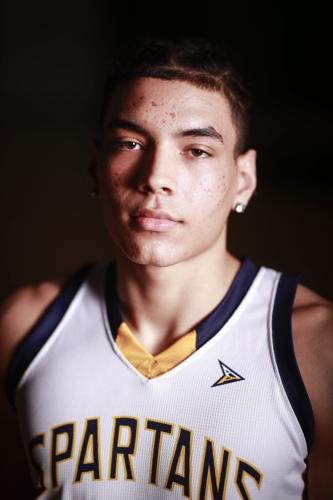 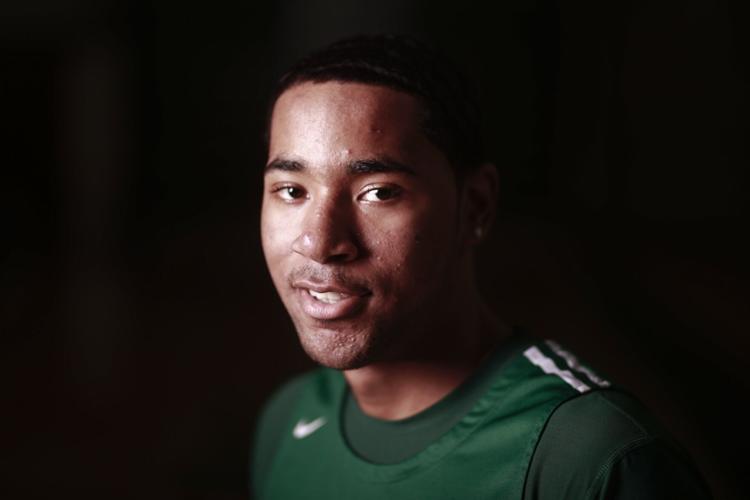 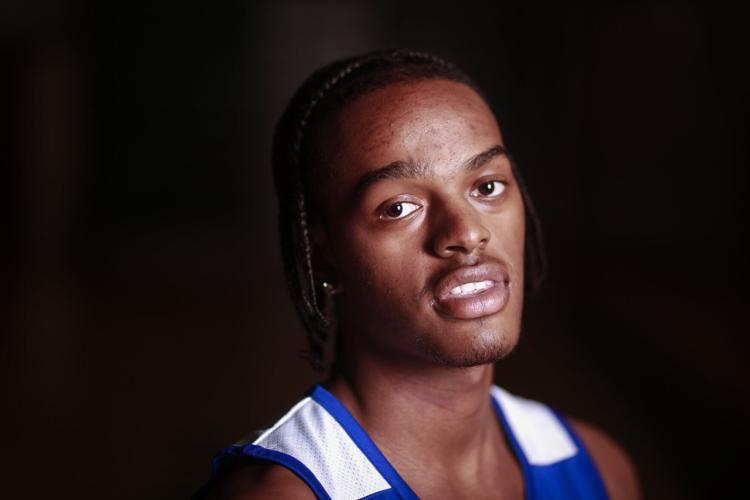 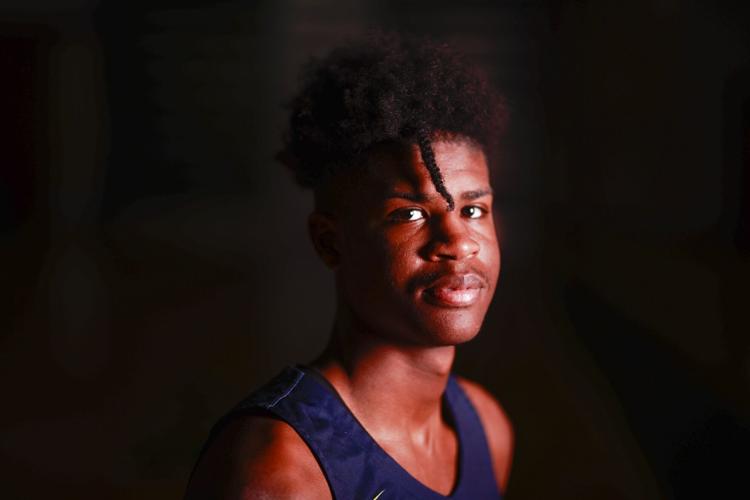 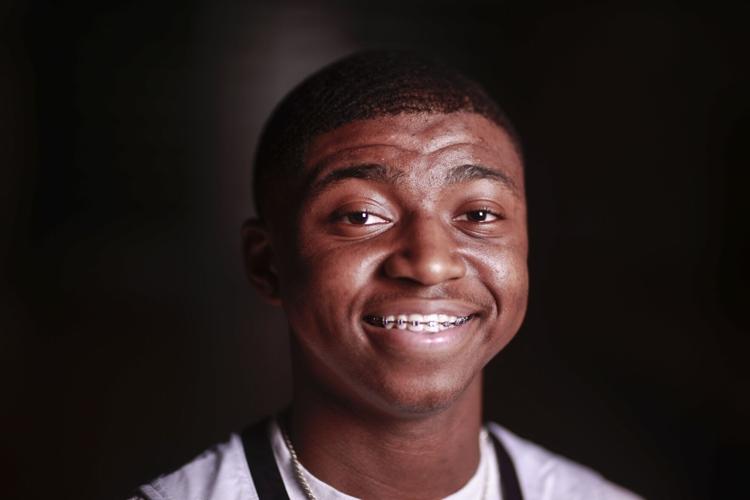 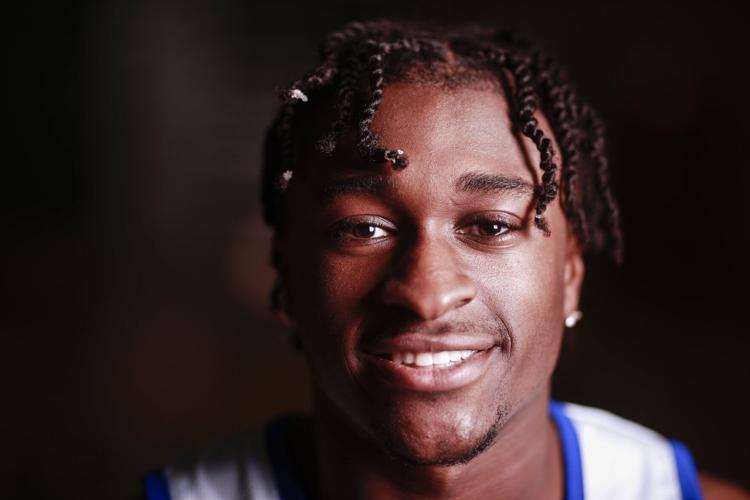 Dennis Parker Sr. and Milton Bell formed a brotherhood as classmates at John Marshall High in the 1980s, Parker as a football standout and Bell as a basketball standout.

Bell was a groomsman in Parker’s wedding, and he’s the godfather to Parker’s children.

So when Parker was looking for someone to teach basketball to his son, Dennis Jr., he encouraged and eventually enlisted Bell, the 1988 All-Metro player of the year who had settled back in Richmond after playing professionally in Europe and South America.

One of Bell’s first sessions with Parker Jr. was in the family’s backyard, in the middle of January in mid-30-degree temperatures.

Bell worked with Parker Jr. from third grade to seventh grade. Talented then and now, Bell’s godson and early protégé has joined him 34 years later as the All-Metro player of the year.

The Times-Dispatch, which selects the player of the year and the All-Metro teams, marked the occasion by re-creating the “Chief Justice” theme – Jayem’s nickname is the Justices -- that was part of Bell’s All-Metro picture in 1988.

Parker is a 6-foot-6 1/2, 200-pound junior guard. He has the versatility to impact a game on both ends, can score from anywhere – he made 6 of 8 3-pointers in the VHSL Class 2 state championship game -- and can use his size around the basket when necessary.

Parker is considered a top 70 prospect nationally by several recruiting sites, with a long list of Power Five suitors and others to match. He said he doesn’t plan to cut his list until after the AAU season ends during the summer.

“Dennis has a chance to be the best player I’ve ever coached,” said Jayem coach Ty White, whose AAU program counts several NBA players among its alumni.

He went to Georgetown, where he quickly found himself undersized as an interior player: The Hoyas had 6-10 Alonzo Mourning and 7-2 Dikembe Mutombo. Georgetown coach John Thompson suggested Bell start learning to be a guard.

Bell and Parker wanted to avoid a similar late transition for Parker, who was considerably taller than his peers as a youth. They worked on guard skills.

“It’s one of those things where Dennis Parker Jr. got the Uncle Milt who was the point guard in pro ball and not the center who played high school basketball,” Bell said.

“I knew he was going to be my size, and I was determined that his progression would not be as slow as mine.”

Parker’s father gave permission for Bell to sign out Dennis Jr. from an after-school program so they could work together.

“He would take him back to the gym and work with him one on one, then take him back after about an hour of working on his shot, the basics, the fundamentals, attacking the basket, using your left hand, using your right hand,” Parker Sr. said.

Dennis Jr. said Bell also taught him not to lose confidence when shots weren’t going in the basket. That still helps now, he said, “to never let something in your mind tell you that you can’t do something.”

“He’s helped me just enjoy basketball more,” Parker Jr. said. “He explained the game to me."

Teaching helped Bell as well. He was searching for something to pour his energy into after his playing career ended. He now runs The Milton Bell Team, a group that develops youth and pros in basketball and also serves as a consulting agency for pro players overseas.

Others, such as former NBA player Reggie Williams and Brandon Ward, have been part of Parker Jr.’s development. He works a lot now on ball handling and improving his overall skills.

White said Parker Jr.’s athleticism has increased since he started for Jayem as a freshman. He’s “one of the best chase-you-down [shot-blockers]” from behind, his “ability to play ahead has gotten a lot better,” and his shot-making this past season “was unreal.”

Bell, who has been tapped as part of the 2022 class of the John Marshall Athletic Hall of Fame, doesn’t go to Jayem’s games out of respect for COVID. But he watches Parker Jr. via streaming.

“I’m sure you can understand why Uncle Milton sometimes, at 51 years old, I start crying when I see him play or when I talk to him on the phone or they stop by to see me,” he said.

Notable: A returning All-Metro player, Blair averaged 19 points, 6.3 rebounds, 2 assists and 1.1 steals for the Spartans, who finished 28-3. He shot 46% on 2-pointers and 34% on 3-pointers. He scored 35 points in the state quarterfinals and had several games with at least 25 points. Blair was first-team all-state in VISAA Division II. Considered a top 150 prospect in his class, he has committed to Liberty.

Notable: Daughtry was an All-Metro pick last season at L.C. Bird, where he was the Region 5B player of the year. He averaged 23.2 points for Benedictine this season while surpassing 1,000 career points. Daughtry had five games where he scored 30 or more points, including a 35-point performance against Catholic. He was a first-team all-state pick in VISAA Division I.

Person he admires: “LeBron James. He’s like an all-around player. He does it all. I try to model my game [after] him.”

Notable: Davis averaged 21.9 points and was a force in the postseason while helping Highland Springs to the Class 5 state championship. He had 22 points as the Springers handed rival Varina its only loss; 32 in the region semifinals against L.C. Bird; 22 in the state semifinals; and 16 in the championship game, including a game-tying 3-pointer with 18 seconds left as Highland Springs came from behind. Davis was a first-team all-state pick.

Person he admires: “My Pops [Sylvester]. He always knows what’s best to do and say. He gives the best advice when needed.”

Notable: Stinson missed some early games because of injuries before becoming a do-it-all force for the state champs, averaging 12.7 points and 6.1 rebounds. A hard-nosed rebounder who can shoot from the perimeter, he has attracted attention from VCU and Virginia Tech. He averaged 17 points and 7.5 rebounds in the postseason, including a 20-point, 14-rebound effort. The all-state pick had 24 points and 14 rebounds in a tournament game that included national powers.

Interests: He's played tennis since he was 5 years old.

After going down 1-0 early in the game, the Douglas Freeman girls soccer team stormed back, spoiling Deep Run's senior night with a 2-1 victory.

Highland Springs is set to undergo a "major branding change" as it transitions to a full Nike school over the next three years, Springers dire…

"The quality of tennis was fantastic, the drama could not have been much higher. It was just a good day."

Carter Schmitt walked 28 times as a freshman at St. Christopher’s, the second-highest total in school history.

The baseball seasons for Collegiate, St. Christopher’s and Steward ended Friday in the VISAA state semifinals at Shepherd Stadium in Colonial …

"They loved it. It was a lot of fun. ... Our guys grinded the entire time to put us in a position to win."

A 6-foot-5, 310-pounder in the Class of 2023, recruiting site Rivals.com ranks Starlings as the No. 18 defensive tackle in the country for his class and No. 4 overall in Virginia.

"I'm going to come back better than I was, I can promise you that."