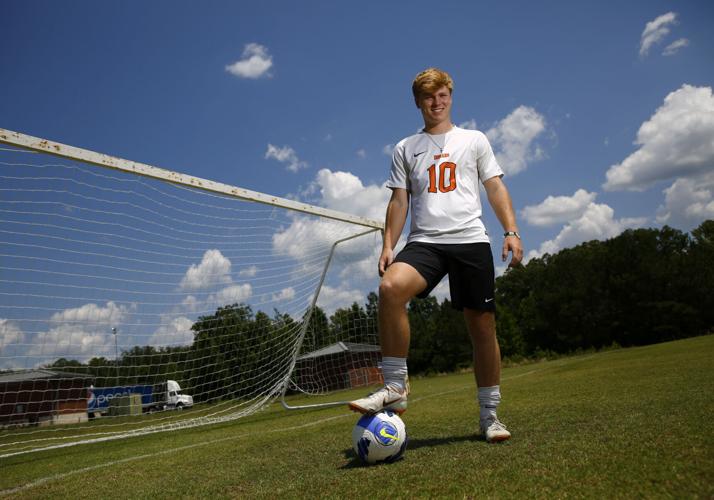 Powhatan's Parker Sloan is the All-Metro boys soccer player of the year. 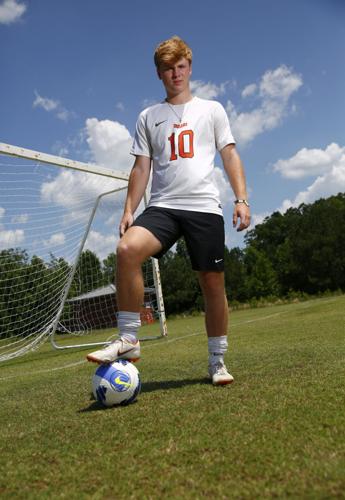 All-Metro player of the year Parker Sloan poses for a photo on the soccer field at Powhatan High. Sloan’s father, Brian, was an accomplished baseball player, but Parker quickly fell in love with soccer at an early age. 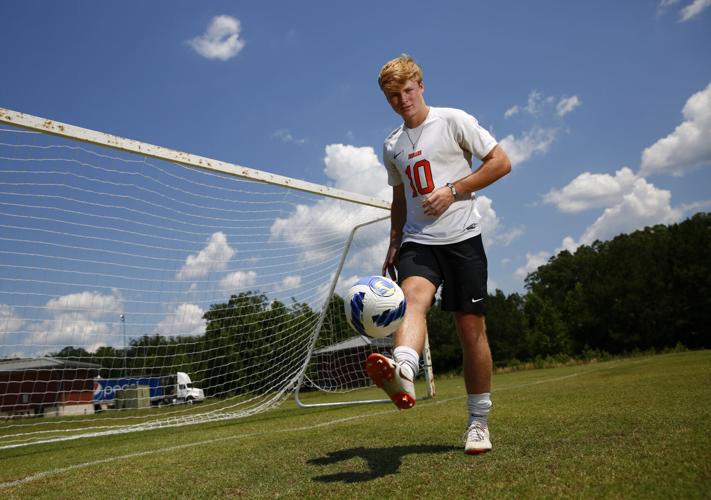 Powhatan high school's Parker Sloan is All-Metro Soccer player. He is shown at the school on Friday, July 1, 2022. 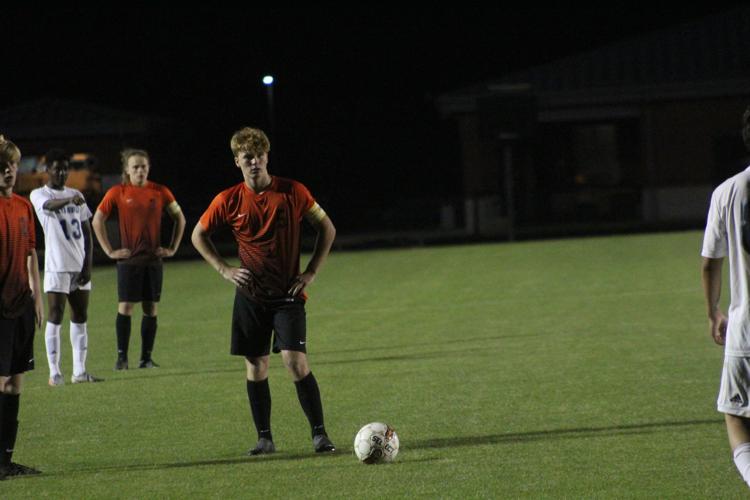 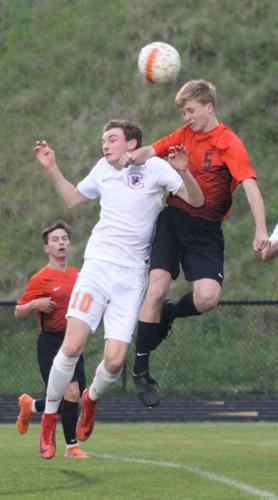 When Parker Sloan was an eighth grader in Powhatan, the varsity coach would frequently pull the forward up to train with the upperclassmen.

The juniors and seniors quickly grew resentful of how quickly Sloan could score against varsity competition.

“A few of the kids on the team weren’t very fond of me,” Sloan said. “People to this day on that team will say I’m overrated.”

Sloan's honors would beg to differ. The 2022 Virginia Gatorade State Player of the Year, who scored 35 goals and assisted 17 this season, is this year's Times-Dispatch All-Metro player of the year for boys soccer.

Sloan took his team from a three-win season last year to its first state tournament appearance since 1995.

Born in Cumberland county, Sloan is used to a rural farming environment not typically associated with soccer stars. Sloan’s father Brian was a standout pitcher for Randolph-Macon, and is known as Mr. Baseball in Cumberland.

“I was supposed to play baseball — my dad had been throwing balls at us since we were able to walk.” Sloan said.

When Brian realized Parker wouldn’t burn enough energy playing T-ball, he signed his son up for soccer, and it was love at first whistle.

“That big old orange head, I just put it down and go," Sloan said.

The soccer field has been a place where Sloan could escape his worries and find confidence, from his first rec league game to now.

“It’s the love of my life,” Sloan said. “I was always able to push everything away and just play soccer.”

As a 7-year-old watching University of Virginia games with his fellow youth teammates, Sloan set out a goal to pursue a college soccer career with the Wahoos.

Despite not coming from a soccer family, Sloan has memories of his dad drawing tattoos with a marker on panty hose to put on Sloan’s sleeves for his David Beckham costume at a first grade cultural assembly.

A longtime player for travel club Richmond FC, Sloan’s parents drove him to practice 50 minutes (longer if the car got stuck behind a tractor) each way, three days a week for practice, not including traveling across the state for games.

“I wrote my parents a letter the other day thanking them for this stuff,” Sloan said. “The sacrifice of gas, hours — they never missed a game.”

While Powhatan soccer doesn’t have the pedigree of Richmond FC, Sloan said he still got a lot out of playing for his school.

“It’s a different thing,” Sloan said. “I play with pride. Playing for your school colors and playing for the guys on that team was just awesome.”

Sloan said his goal was to lift his teammates, something he was able to do in the team's successful 2022 campaign.

“I had to learn that I had to be a leader here,” Sloan said. “I want to bring you up to the highest level you can.”

Sloan was told as a junior that UVA would be interested in signing him if he could keep his grades up. When Sloan relayed the news of their interest to his parents, Sloan’s father refused to believe it without proof.

“I got on a Zoom call with one of the assistant coaches and he told my dad exactly what I had told him,” Sloan said. “My dad was just smiling through the roof.”

Brian asked the assistant how Parker could commit, to which the assistant replied that Parker just needed to verbally agree to sign with UVA and the rest would be taken care of.

“My dad wrote on piece of a paper, ‘Are you ready to be a Wahoo?’” Sloan remembered. “I shook my head to him and told (Adam Perron, the assistant coach), ‘If it’s alright with you, I’d love to verbally commit to be a Cavalier.’

Sloan leaves Powhatan as an All-American, the Region player of the year, and most importantly to him, a captain for a squad that found team success. Not too bad for an “overrated” player.

The skinny: The Rapids' primary goal-scoring threat scored 22 goals and assisted on 15 for a James River side that finished 20-1-1 and reached the state finals. Named to the Class 6 All-State first team.

The skinny: Jenkins led the attack for Collegiate’s 21-0-1 state championship winning team. He scored a team-high 17 goals and handed out 10 assists during the season, including six game-winning goals. Believed to be one of the most dynamic players in VISAA, Jenkins was an All-State first team selection as well as All-Prep League and United Soccer Coaches All-South Region selection.

The skinny: Described as a “maestro” by All-Metro Player of the Year and travel team teammate Parker Sloan, Nguyen has a knack for finding open teammates at an elite level. Named Region 6A player of the year and All-state first team after scoring 22 goals and dishing out 12 assists.

The skinny: Led team with 24 goals, and had multiple hat tricks and game winning goals, scoring in 11 out of 13 matches. Two time All-Region first team selection and 2022 Region Player of the Year. Jones led Freeman to two undefeated regular seasons. He will be playing for Christopher Newport next year.

The skinny: Johnson earned an All-State first team nod this season after helping Deep Run to a 17-5 record. He is a two-time team MVP.

The skinny: Earned his second VISAA Division II Player of the Year award, leading Steward School with 35 goals and 19 assists en route to a state finals appearance. Noted for his creativity with the ball, Roberson scored a hat trick on three occasions. Has been recruited by Campbell University.

The skinny: Anchored the Collegiate back line to an undefeated season, a Prep League Title and Collegiate's first VISAA State Title since 2004. Named as a United Soccer Coaches All-American, along with VISAA and Prep League player of the year. Only allowed six goals when on the field and led the team to 15 shutouts.

The skinny: A first team All-Region and second team All-State selection, O’Donnell is known for his attacking ability from the wing-back position. He led Cosby with 10 assists while contributing seven goals.

The skinny: Vickerie is a dominating presence in the backline that led his team to a .625 goals against average in the regular season. The first team All-Region selection scored the second most goals for Thomas Dale. He will be a preferred walk-on this fall for Old Dominion.

The skinny: Known for his leadership and decision making, Moran was a first team All-Region and All-State selection. He anchored the defense to eight clean sheets on the team's way to a state semifinal appearance.

The skinny: Rennes replaced 2021 first team All-Metro keeper Drew Slack for the Rapids and helped them to a regional championship and state final appearance. Rennes was named to the All-State and All-Region team. Held opposing teams to eight goals on the season and tallied 11 shutouts.

Dinwiddie, Bird, Hopewell, Powhatan, Manchester, Midlothian, Petersburg, Thomas Dale all roll. Varina survives scare at Hanover. Benedictine comes from behind to beat St. Chris, Trinity Episcopal comes back to win in Maryland. Plus scores from around the state and next week's schedule.

Tom Zimorski, who made a lasting impact on Central Virginia and Atlantic Coast Conference sports as an administrator and official, has died.

"Freddy's a dog, Freddy is like that, stop sleeping on Freddy."

🏈 No. 2 Varina finds ways to win in road victory over tough, determined No. 8 Hanover

“They played tough. They got the ball in great situations. They got momentum on the onside kickoff. When we come into somebody’s home and they get the momentum, we have to find ways to get the W.”

High school football Week 5: Player of the week poll, local game stories, summaries and scores from around the state

804 Varsity coverage of Week 5 of the high school football season around the greater Richmond area, plus scores from across the state and next week's schedule.

The top-ranked team in the state of Virginia looked every bit the class of the commonwealth Monday night, as No. 1 Highland Springs went on the road in misty conditions to rout Northern Virginia power Colonial Forge.

L.C. Bird athletics' Skyhawks Hall of Fame held its banquet ceremony Saturday to induct five new members in the Class of 2022, including three…

High school 🏈 games of the week: Picks and previews for No. 9 Benedictine at St. Christopher's, No. 2 Varina at No. 8 Hanover

Picks and previews for No. 2 Varina at No. 8 Hanover and No. 9 Benedictine at St. Christopher's, plus this week's full local schedule.

A senior 5-foot-8, 165-pound signal-caller, Shelton accounted for 180 yards of total offense and two rushing TDs as a dual-threat QB in the reigning Class 2 state champs' 28-0 victory over Westmoreland to help the Cavaliers move to 4-1 on the season.

Quentin Mankin’s confidence was a little shaky last year when he made the move from safety to cornerback in Dinwiddie High’s defense. “Corner …

The doctor who examined Dolphins QB Tua Tagovailoa has been fired

Powhatan's Parker Sloan is the All-Metro boys soccer player of the year.

All-Metro player of the year Parker Sloan poses for a photo on the soccer field at Powhatan High. Sloan’s father, Brian, was an accomplished baseball player, but Parker quickly fell in love with soccer at an early age.

Powhatan high school's Parker Sloan is All-Metro Soccer player. He is shown at the school on Friday, July 1, 2022. 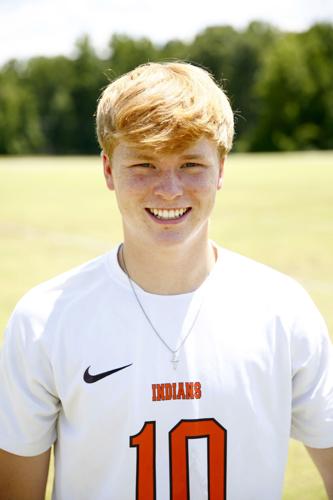 Powhatan high school’s Parker Sloan is All-Metro Soccer player. He is shown at the school on Friday, July 1, 2022.