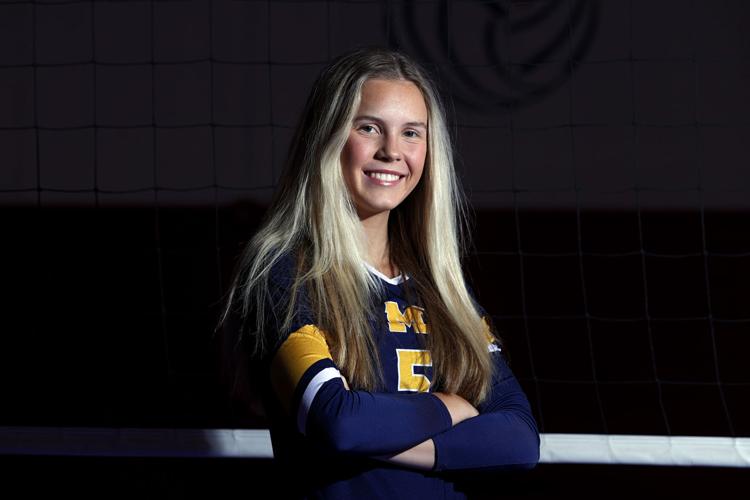 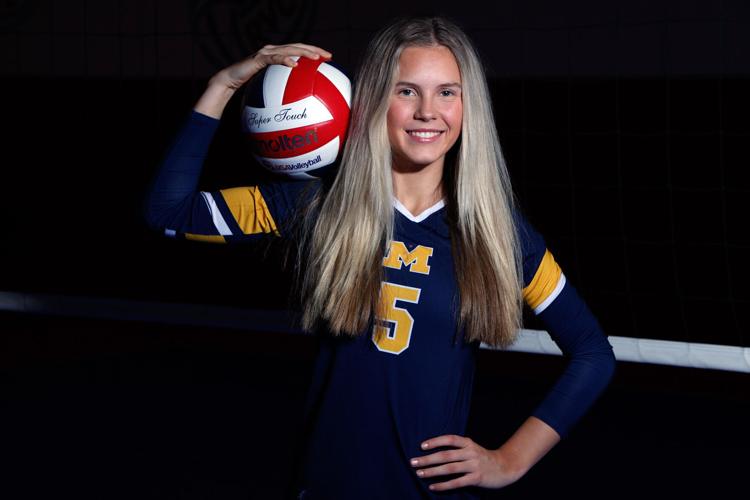 Tatum Evans transferred from Veritas to Midlothian before the 2021 season, when she helped carry the Trojans to their first state championship. EVA RUSSO/TIMES-DISPATCH 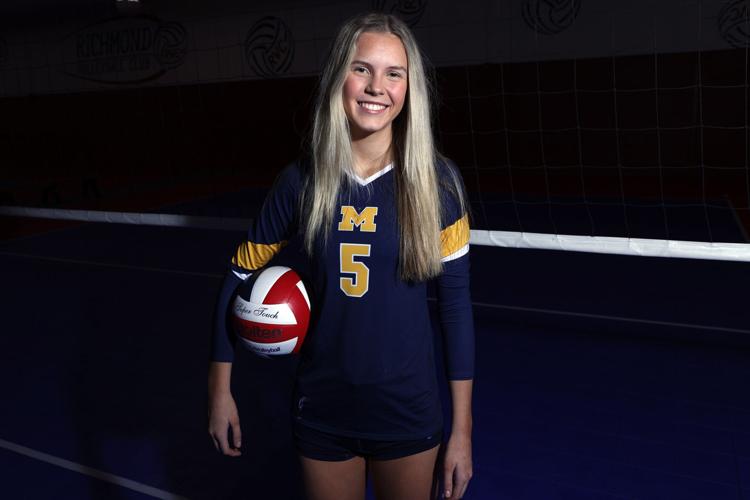 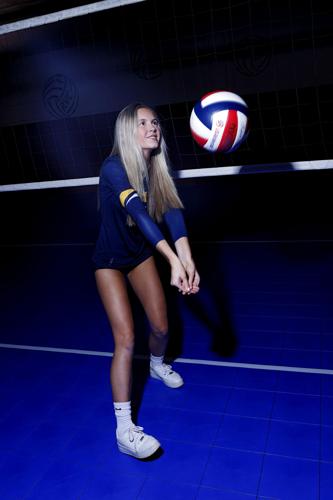 Through nine years of playing at elite levels through the youth ranks, Evans had solidified her position of being an impressive young forward.

Then, as she grew, Evans noticed a specific change on the pitch.

“I got tall, and I was a little bit slower,” Evans recalled. “I noticed that all the other forwards were shorter, and super quick. So my mom suggested that I switch to volleyball, where my height would be appreciated.”

She listened, and the result was stardom on a court that's indoors rather than outdoors. Now, Tatum Evans’ high school career is capped by being named 2022 All-Metro Player of The Year, the first Midlothian Trojan ever to receive the selection.

It wasn’t like Evans started from scratch when trading the soccer ball for a volleyball. Her mother played in high school, and became Evans’ first volleyball coach as well. Watching her sister join her mother playing in a recreational league, Evans found herself joining them in practice outside at their home.

She also began practicing on her own, her garage wall the opponent, setting to herself and slamming the ball against the helpless structure. Then, on the club circuit, Evans made a nationals team in her first year as an eighth grader.

“Because of my height,” Evans sheepishly recalled.

Her high school tenure began at The Veritas School, where she would become a big fish in a small pond.

“Volleyball is pretty big there,” Evans said. “I made the varsity team in eighth grade. Again, probably because of my height.”

But by her freshman year, Evans wasn’t known for just her height. Her all-around game had grown to form. She was all systems go for her sophomore season, but didn’t know that when she stepped off the court to end the prior year, it would be her swan song at Veritas.

The COVID-19 pandemic robbed Evans, and so many others, of a season in 2020. With plenty of time to think, she thought about the immediate future, and began to wonder what life as a Midlothian Trojan might be like.

“There were more people, it had a better (volleyball) program, and I loved the coach,” Evans recalled of her decision to move to her public school. “Midlo is a great school. (Veritas) was a big school, but just didn’t have as much as Midlo offered.”

So, when competitive volleyball returned throughout the high school ranks in 2021, Evans sported the “M” on her uniform, playing for longtime area coach Sherman Chung. The Trojans had never played for a Virginia High School League (VHSL) state championship. Joining an already talented squad, Evans played her role in the Trojans capturing the Class 5, Region C Championship over perennial area power Mills Godwin.

But the Trojans saw their state dreams dashed, falling to Patrick Henry-Roanoke in a five-set heartbreaker in the Class 5 state quarterfinals. Evans had one more chance to scale the mountain, and she would do it from a totally different perspective.

Chung moved Evans from setter to outside hitter. This time, maybe it was more about her power, her talent, as opposed to her height. And as a result?

“She was the glue to our undefeated season all year,” Chung said when asked about Evans. “Despite our multitude of injuries of starters, she was the consistent rock.”

You need a rock to navigate a perfect season. Evans helped to plot and power her Trojans to 26 consecutive wins, defeating fellow unbeaten Deep Run October 24th, then again to repeat as region champion in November. Wins over Riverside and Massaponax set the stage to meet First Colonial, seeking its first VHSL championship since 2014.

“This year, we looked at last year and knew we had everything we need. Our motto was 'refuse to lose,' Evans said. “On and off the court. Practices were probably more intense than games.”

That intensity served Evans and her fellow Trojan teammates well that Saturday night at Siegel Center. Down two sets to one, their backs to the wall for the only time all season, Midlothian responded, winning the fourth set 25-16, then prevailing 15-13 in the fifth set tiebreaker.

Awaiting Evans is a career at Virginia Tech, where she hopes to help turn the Hokies’ fortunes. They look at Evans as a hitter who can set. Evans doesn’t care which position she takes, so long as she’s on the court.

The Skinny: A second team All-Metro member in 2021, Wood topped VISAA Division I in digs with 486, averaging over 16 per match to go with 46 aces and 36 assists over 94 sets for the Saints, a state quarterfinalist. Wood earned second team All-State and All-LIS honors for her work. With over 1,150 career digs, Wood will be one of the top returning players in the area for this fall.

The Skinny: Make it back-to-back 300 kill seasons as the driving force behind the Raiders’ run to the Class 4 state quarterfinals registered 352, and leading the team in every statistical category except aces. A first team Class 4 All-State and repeat Region 4B All-Region honoree will continue her career at Loyola (Maryland). This is her second first team All-Metro honor in as many seasons.

The Skinny: A first team All-Metro repeat performer, Ball is called “the best all-around outside hitter in the area” by her coach, Sherman Chung. Despite missing six games, Ball registered 211 kills, 49 aces, and 150 digs with a .360 hitting percentage. Sweeping first team All-State Class 5 and All-Region in Region 5B honors, Ball no doubt will be the catalyst to Midlothian’s hopes for a repeat title in 2023.

The Skinny: Moving up from second team All-Metro in 2021 is the heart and soul of a Wildcat squad that began 16-0 and made the Class 5 state quarterfinals. Ward not only had 273 kills and 237 digs, her 95% serving average included 65 aces. She was named first team All-Region in 5C and second team All-State in Class 5.

The Skinny: The final piece of their championship puzzle, Eslinger moved to Midlothian from Tennessee for her senior year and contributed 264 digs, 43 aces and a 2.4 passer rating for the Class 5 champions. Eslinger, who will play collegiately at Missouri State University, earned first team All-Region 5C and second team All-State Class 5 honors.

The Skinny: A four-year starter for the Trojans, Hyndshaw collected 297 kills, 226 digs, 55 aces and a 94.4% serve percentage, with eight double-doubles in kills and digs. She received her fourth straight first team Region 3A honor and was named second team All-State in Class 3, helping her team take eventual Class 3 state champion York to five sets in the Region 3A semifinals. Her 792 career kills are second all-time in Trojan history.

The Skinny: Woods, a first team All-Region 4B and second team All-State in Class 4, threw down 221 kills to go with 158 digs, 52 blocks, 47 aces and 16 assists in leading the Hawks to the Region 4B semifinals where they were upset by archrival Atlee. Woods, coupled with senior Elizabeth Patina, gave Hanover a dominant one-two punch at the net during a renaissance season which saw nineteen victories.

Previous players of the year

Tatum Evans transferred from Veritas to Midlothian before the 2021 season, when she helped carry the Trojans to their first state championship. EVA RUSSO/TIMES-DISPATCH