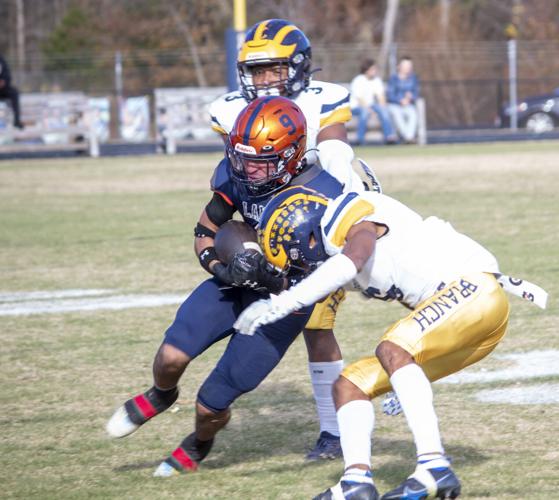 Manchester's Devin Bryant was consistent throughout against Western Branch, carrying the ball 17 times for 85 yards and a touchdown. 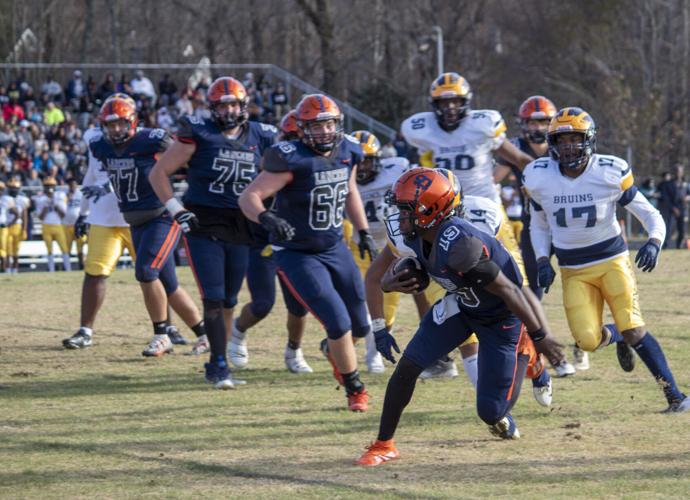 Manchester's Jason Wright knifed his way through the Western Branch defense on this first quarter run to set up the Lancers in the red zone. Wright would score from 1 yard out for the first Lancers score of the day in the 21-14 loss to the Bruins. Wright had 61 yards passing and 83 rushing.

The first half was a track meet. The second half was a defensive slugfest.

But when the Manchester Lancers think back to Saturday’s Region 6A championship game against Western Branch, it’ll be the missed opportunities that rise to the top of the collective memory in the 21-14 loss to the Bruins.

“It’s going to be one of those games that our kids are going to look back on 20 years down the road and think, ‘What if?’” Lancers coach Tom Hall said. “I’m proud of the kids. They really battled today. We just couldn’t get over that hump.”

Down 21-14 in the third quarter, Manchester had its first chance slip away following a muffed punt. The fumble recovery set up Manchester at the Western Branch 40-yard line, but two runs and a sack ended the drive.

Another came near the end of the third quarter, following a possession when Western Branch was backed up in its territory after solid defense by the Lancers and a block-in-the-back penalty on the Bruins. The ensuing punt set up the Lancers near midfield, and an 11-yard run by Corey Holland got the drive off to a good start.

Three runs later, Manchester was knocking on the door of the red zone when quarterback Jason Wright threw a pass into the end zone that was picked off by the Bruins.

The Lancers had one last chance when they got the ball with 2:52 remaining after a sack ended the Bruins drive and forced a punt.

A pass from Wright to Makai Byerson went for 15 yards and had the Lancers at the Bruins 42. But Wright was stopped for a short gain on the next play, had a pass fall incomplete, and then fell on third down and fumbled, which was recovered by the Bruins and sealed the game.

“I really felt like we were going to tie it up that last drive,” Hall said. “[Wright] scrambled and just lost his footing and lost the ball. Just one of those things.”

Western Branch (11-2) jumped out to a 14-0 lead in the blink of an eye in the first quarter. The Bruins recovered a wayward Manchester snap on the Lancers’ first drive that set them up at the Manchester 20. It took just two plays for Paul Billups to run it in from 18 yards for a 7-0 lead.

After a Manchester three-and-out, Bruins quarterback Taquan Trotman found Billups for a 22-yard touchdown pass and a 14-0 lead.

The Lancers (11-2) offense got a jolt to begin the second quarter on a 25-yard pass from Wright to Ty’ee Stephens on fourth-and-4 to extend the drive. Wright ran the ball effectively in the red zone and scored from 1 yard out to make it a 14-7 game.

Bruins running back Shimique Blizzard was a problem throughout the game for the Lancers defense, especially so on a touchdown drive that saw him run for 72 yards, including a 29-yard run that made it 21-7.

Blizzard had 28 carries for 238 yards for Western Branch.

“It was hard to slow him down,” Hall said.

Wright engineered an immediate answer to the Bruins scoring drive. He found a wide-open Brandon Phillips for a 23-yard reception, followed by an 18-yard run for Wright which set up the Lancers deep in Bruins territory. Two plays later, Devin Bryant scored from 13 yards out to make it a 21-14 game.

Wright had 61 yards passing and 83 rushing yards for the Lancers. Bryant had 17 carries for 85 yards and the touchdown.

Manchester graduates 16 seniors from this year’s squad, but Hall is confident in the crew he has returning and hopes this game will serve as motivation in 2023 and beyond.

John Marshall's basketball team, ranked No. 2 in the country, is one of the best shows in town

The Justices, ranked No. 2 nationally by MaxPreps, delivered monster dunks galore, a barrage of lights-out 3-pointers, some from NBA range, and enough how-the-heck-did-that-happen? moments to fill a lengthy highlight reel.

"She was the glue to our undefeated season all year."

Throughout his volleyball life, Riley Irmen has been looking up.

"It's go-time. Let's get stronger. See y'all in the weight room."

The first quarter quickly became a long-distance aerial show. The home team connected on four 3-pointers. The Springers, the defending Class 5 state champion, answered with three. Eight minutes in, the score was 17-all.

Manchester's Devin Bryant was consistent throughout against Western Branch, carrying the ball 17 times for 85 yards and a touchdown.

Manchester's Jason Wright knifed his way through the Western Branch defense on this first quarter run to set up the Lancers in the red zone. Wright would score from 1 yard out for the first Lancers score of the day in the 21-14 loss to the Bruins. Wright had 61 yards passing and 83 rushing. 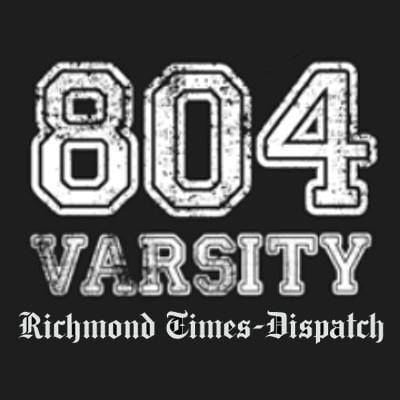