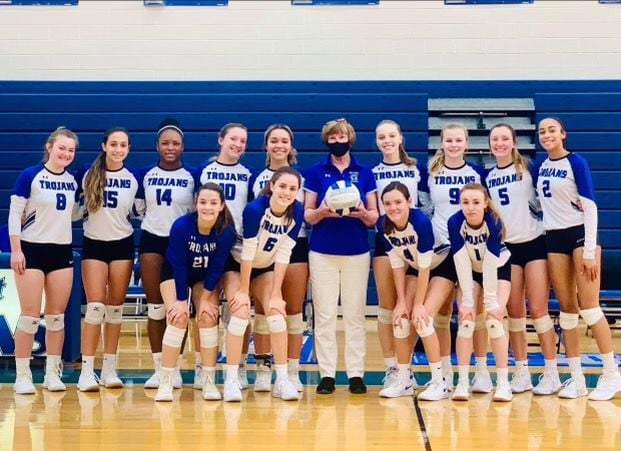 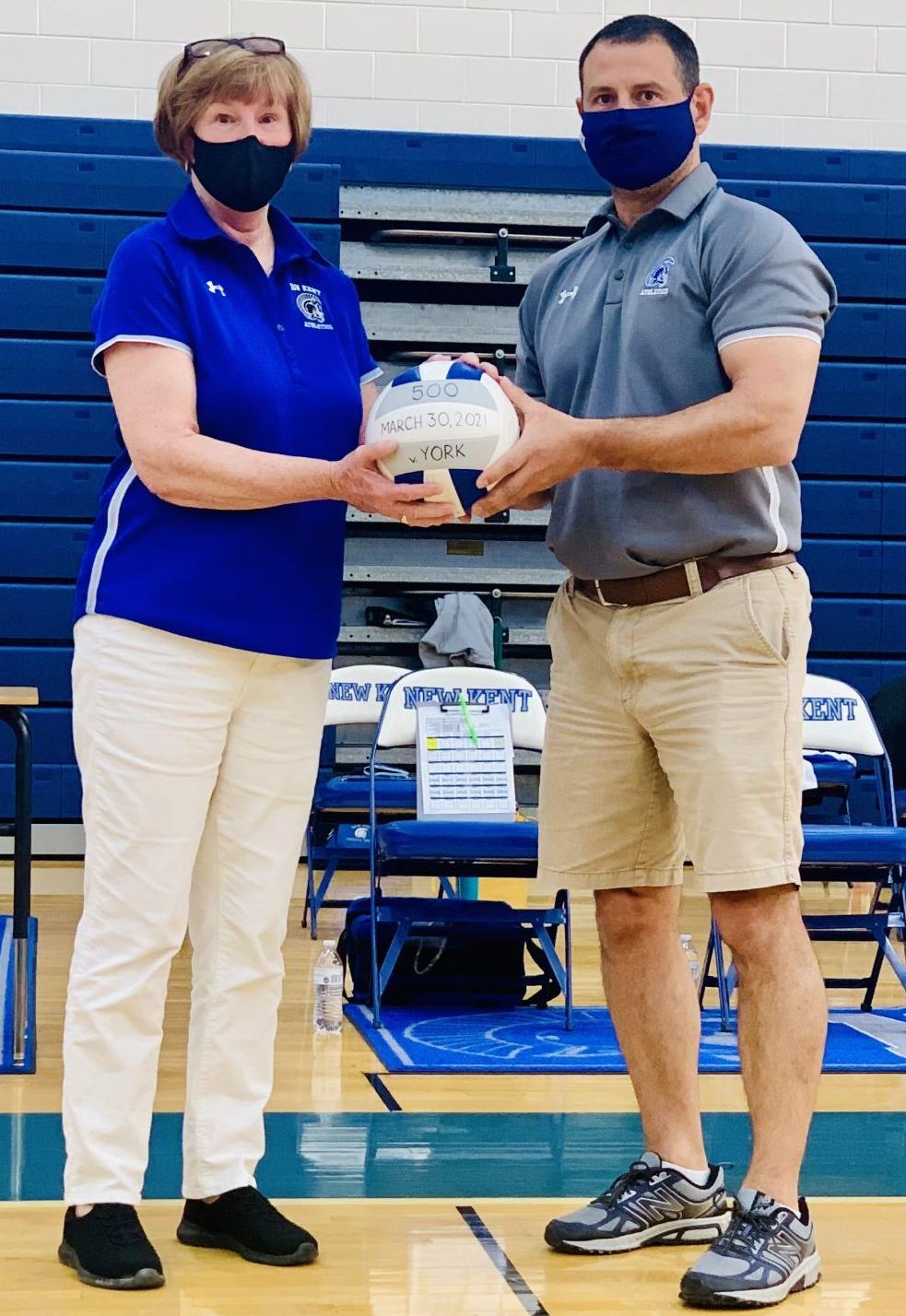 After 33 years at the helm of the New Kent girls volleyball program, Cynthia Burnett felt more relief than joy at reaching her 500th win.

Burnett, 66, hit the milestone on March 30 when her Trojans (11-2) beat York 3-0. She took the job in 1988, never imagining at the time that she’d still hold the position three-plus decades later.

But Burnett doesn’t coach for accolades, so she was glad to have the pursuit of win No. 500 behind her.

“I was pleased, I was proud, I was happy,” she said. “But I don’t coach because I’m trying to get to a certain milestone. ... It’s been a journey.”

She’d rather focus on the task at hand — her Trojans are the Class 3, Region A champions after defeating Lafayette 3-0 in the region title match on Thursday. They will play at 5B champion George Mason on Tuesday at 6 p.m. in the Class 3 semifinals.

New Kent has no seniors, 10 juniors, three sophomores and a freshman. Burnett said her current group has been a special one.

“They’re nice girls, very social, they like each other, great family support,” she said. “They’ve just been a joy to coach, and that makes me want to keep coaching a little longer.”

The relationship with her teams, in addition to deep family roots in the New Kent area, kept Burnett at the same post for a long time. She said coaching, like teaching, “keeps you young because you’re around young people.”

Burnett graduated from New Kent, as did her father before her, and has lived in the community nearly all her life. Her father and siblings still live there, in addition to grandchildren and cousins.

“We’ve got roots here, I think it’s a great place to grow up and raise your kids and come back and live,” she said. “We just love it here.”

Burnett’s husband, Stuart, is her assistant coach and an integral part of the program. He keeps stats and coaches a club team that feeds into the New Kent program. Cynthia wasn’t the one tracking her own pursuit of win No. 500. Stuart made sure she celebrated the achievement.

“It’s been a big group effort, I have to give Stuart a lot of credit fort the success,” she said. “And all the girls in the last 33 years have contributed to this.”

Burnett’s first coaching position at New Kent was in gymnastics. She began that gig in 1982, until six years later when former athletics director Ed Allen Jr. asked if she’d switch to volleyball, a new high school sport for Virginia at the time. She and Stuart had some experience with the game playing rec ball, so he quickly got involved as her assistant.

Now, 33 years later, Burnett said the longevity has fostered a sense of stability she cherishes. It’s also been pivotal to the program’s success. During her tenure, New Kent has won six district titles, three regional championships and the 2000 Class A state title. The Trojans were also the Class A runners-up in 2001.

She has led the New Kent program for so long that she’s seen multiple generations of the same families come through the team. Junior setter Hayley Baker has started since her freshman year. Her mother, Stacey Christian Baker, was a setter for Burnett’s 1994 team, the first time the program advanced to the state tournament. Now, Christian Baker helps coach her daughter’s New Kent Juniors club team.

“The longevity is part of the success, the continuity of having the same coaches,” Burnett said. “The girls know what they’re getting into, what the expectations are. We’re not up and down, we’re kind of steady across the board, and it’s paid off.”

Though she doesn’t prioritize accolades, Burnett does have one team achievement on her radar that she’d like to capture again before calling it a career. And she hopes this group of juniors, either this year or next, could be the team to attain it.

“I would love to have another state championship, but I know that’s hard to do,” she said. “But that’s what we try for, we’ll see what happens.”

As we push the reset button after losing the 2020 season to COVID, here’s a look at the area scene.

Adopted from Russia, Monacan High's Tyler Hensley has developed into a quarterback who will play in college

An older gentleman, perhaps a grandfather, brought a newborn boy to a hospital in the city of Kostroma in western Russian on Valentine’s Day in 2003.

A look at the top teams and players as the softball season begins.

Highland Springs, with several high-major Division I recruits, has five shutouts and has allowed just 31 points.

High school results for May 2

New Kent’s Nick Vafiadis, the 2021 All-Metro wrestler of the year, won a national championship during the weekend in the 152-pound class of th…