No. 5 Varina, with its lineup still getting up to speed, presses by No. 7 Henrico
0 Comments
Share this
1 of 2 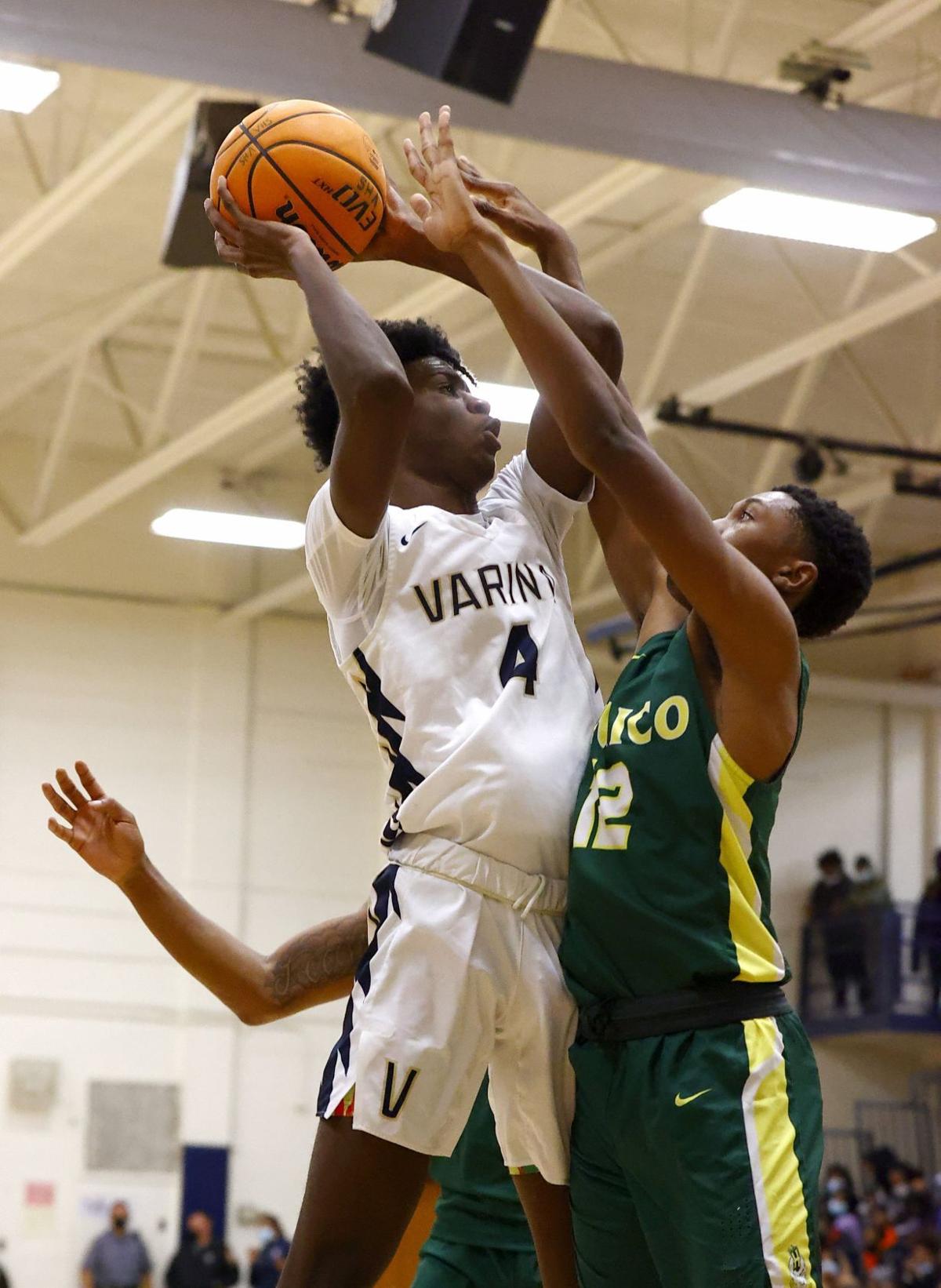 Varina’s Alphonzo Billups shot against the defense of Henrico’s Kyle Brand-Parker in the second half of the Blue Devils’ home victory Friday night. Billups scored 14 points in the 72-51 romp. 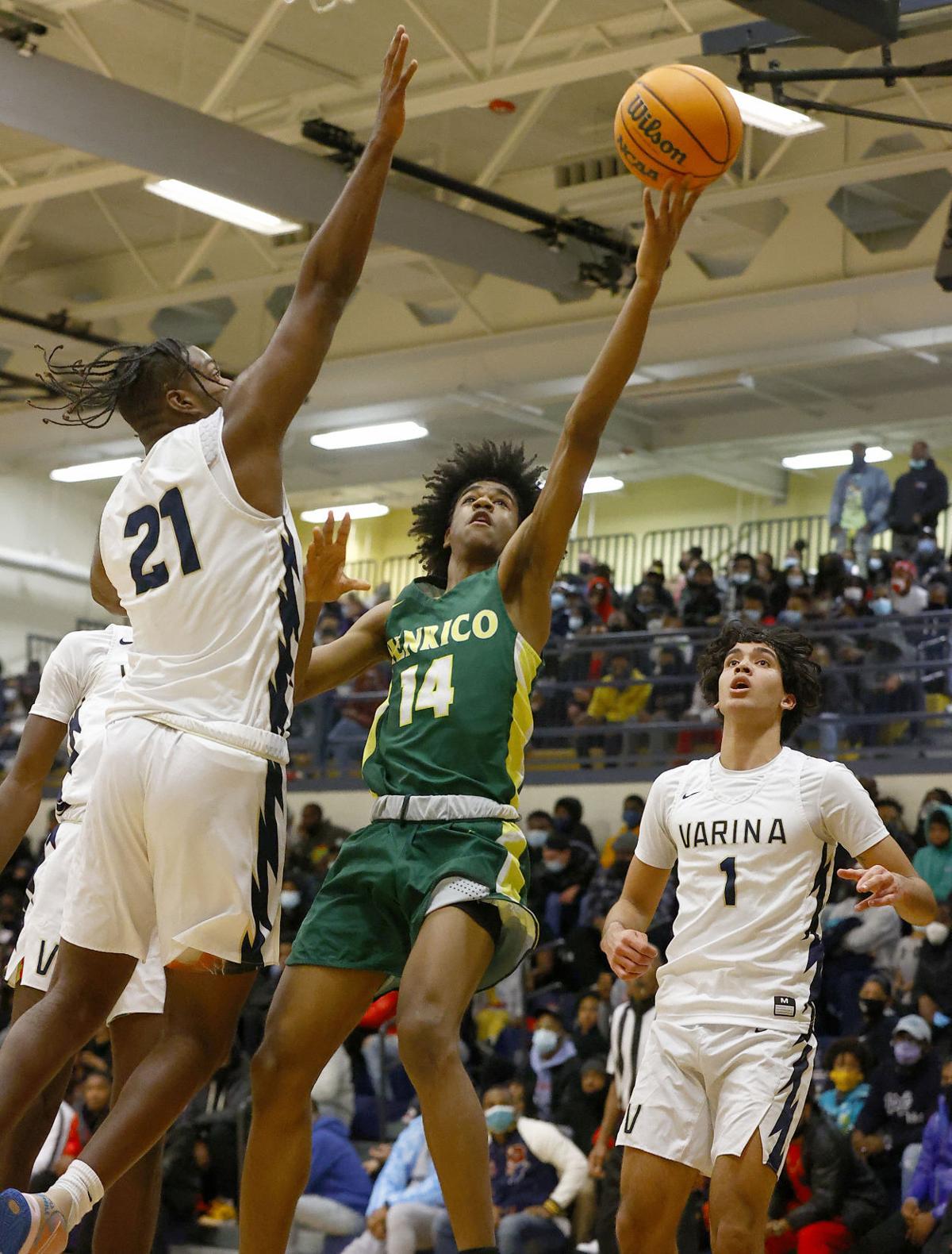 Henrico's PJ Wyatt shoots against Varina's Amari Baylor during the first half of the boys high school basketball game at Varina High School in Henrico, Va., on Friday, Jan. 7, 2022.

Myles Derricott and some of his Varina High basketball teammates may not have a full charge on their basketball batteries yet.

Derricott, Anthony Fisher and Amari Baylor were major parts of the Blue Devils’ Class 4 state football championship. The title game was in mid-December, and they haven’t been able to get a lot of consistent time in the transition to the gym.

Still, Derricott, Fisher and others logged key roles Friday night as No. 5 Varina’s full-court pressure took its toll on No. 7 Henrico in the second half in a 72-51 victory at Varina.

The Blue Devils scored 28 points in the third quarter and 50 in the second half.

Derricott and Fisher were particularly effective during a 13-0 surge in the third quarter that pushed Varina (7-0) to a 17-point lead. Harassing ballhandlers with double teams in the backcourt, they generated several turnovers and easy baskets.

“That’s the chemistry from the football field,” Derricott said.

Fisher, a multipurpose weapon, was the Class 4 state offensive player of the year and an all-state defensive back. Derricott was a standout quarterback, accounting for 2,771 yards and 30 touchdowns throwing, running and receiving. Baylor was a second-team all-region linebacker.

Derricott and Fisher have basketball bona fides, too, established at Patrick Henry and Benedictine, respectively, before joining Varina.

Off the bench early on, they’ve added talent and depth to a lineup that already has 6-foot-7 wing Alphonzo Billups, 6-5 wing Christian Carden, point guard K.J. Wyche and guard Zyir Baskerville, among others.

Wyche led the scoring Friday with 16 points. Derricott had 13 points and three steals. Fisher had 7 points. Billups, a top 100 recruit in the Class of 2022 who has signed with VCU, had some big dunks and finished with 14 points and five rebounds.

“That state championship pedigree, when you come straight off the [football] field, you’ve got that tenacity to want to win,” Varina coach Kenneth Randolph said. “It’s carried over. We’ve kind of been waiting on it. Not that we weren’t a pretty decent team without them, but now that energy of what it looks like to win at the top, they’ve brought it over for us.”

Neither team got in much practice this week because of weather. Varina hadn’t played since Dec. 23. That showed in a low-scoring first half (22-21 Blue Devils).

The pressure got Varina rolling in the third quarter.

“Teams are so worried about us scoring, but we can also play defense,” Derricott said.

Varina’s closest win this season is 7 points. Its other wins have been by at least 20. Still, Randolph said with pieces still coming together, he’d rate his team’s play a 6 so far on a 10 scale. He’d like to get to about 8.5 around playoff time.

“I would love to have two rings on my finger my junior year.”

Varina’s Alphonzo Billups shot against the defense of Henrico’s Kyle Brand-Parker in the second half of the Blue Devils’ home victory Friday night. Billups scored 14 points in the 72-51 romp.

Henrico's PJ Wyatt shoots against Varina's Amari Baylor during the first half of the boys high school basketball game at Varina High School in Henrico, Va., on Friday, Jan. 7, 2022.