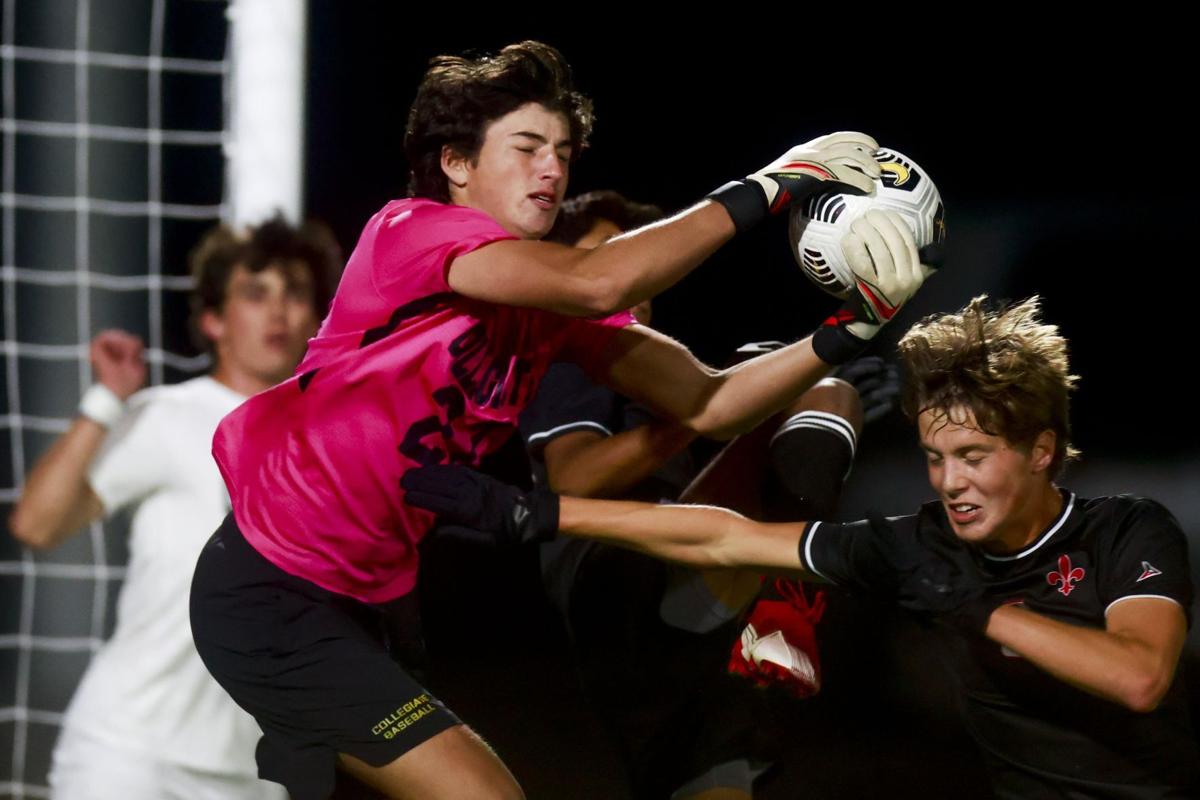 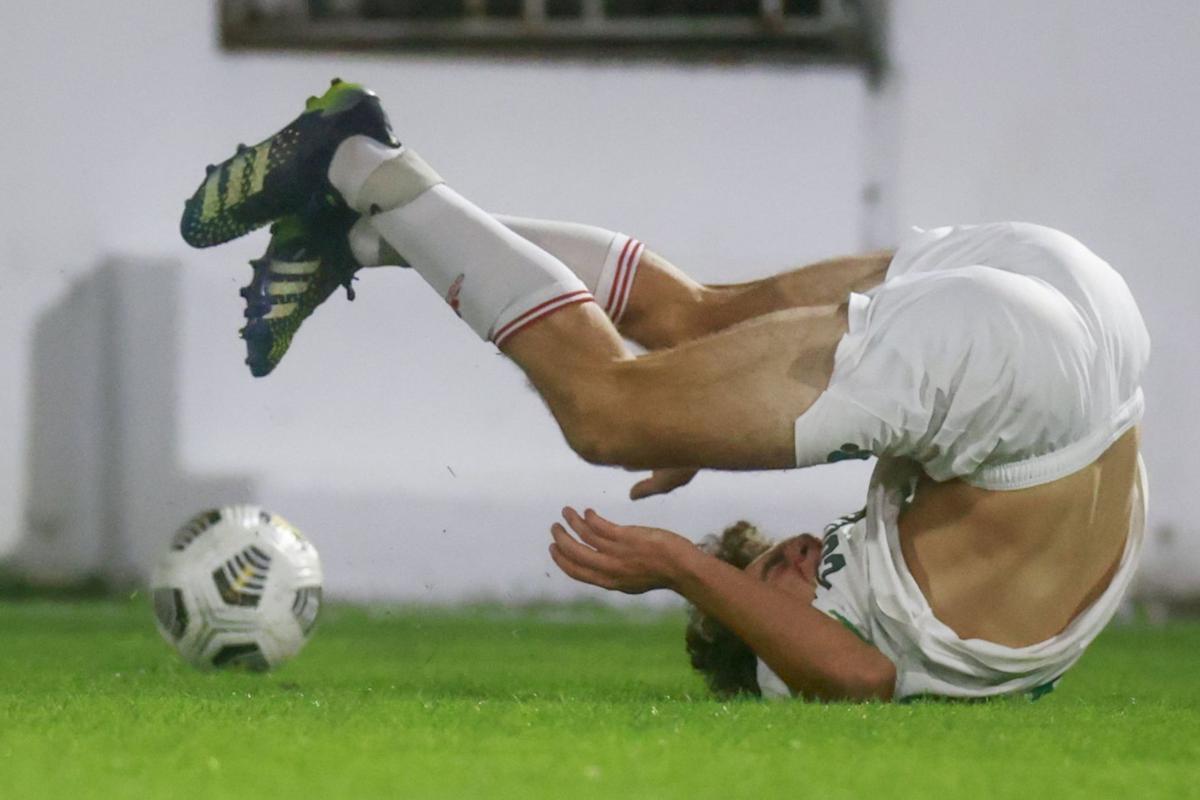 Collegiate defender Will Neuner (20) falls during a high school soccer game on Tuesday, October 26, 2021 at City Stadium in Richmond, Virginia.

Tuesday was a busy day for Collegiate’s Amani Kimball-McKavish.

First, naturally, came school. That afternoon, she took the field to back the Cougars’ field hockey team in its third straight win, 4-0.

Then in the evening, she donned a snow-white bathrobe to stand shoulder-to-shoulder in the Collegiate student section as its boys soccer team — including younger brother Collin Kimball-McKavish in goal — lined up at City Stadium in what was ultimately a 0-0 draw.

On the far side of the stadium stood its opposition’s supporters, dressed in all black. It was rivalry night, the Cougars against the Saints of St. Catherine’s and St. Christopher’s, and the energy was electric.

“We’re like a bunch of caged animals, basically,” Amani said from the stands.

The heat of these rivalry games not only invigorates onlookers, but also boosts the players in contests that can have a big impact on seeding and momentum heading into the postseason.

In the first field hockey meeting of the season between Collegiate (10-5) and St. Catherine’s (7-5) on Sept. 28, the Saints claimed a 3-2 home overtime victory when Emalene Harter netted a third unanswered goal.

This week, the Cougars rushed to an easier victory, with three of their four goals coming in the first quarter.

Although the Saints’ backfield put up a solid fight with goalkeeper Georgie Ascoli stopping several dangerous shots, Doxey said her attack has only continued to develop since their last meeting.

“We’ve been slowly progressing as the season goes on,” Doxey said. “We’re playing more as a team, people are raising their levels and overall I think we’re playing with more confidence.”

Senior Madelyn Curtis held down the midfield, helping drive the Cougars’ possession. Amani serves as a fullback, the last line of defense along with goalkeeper Tucker Walker.

Kimball-McKavish is a senior three-sport athlete who also plays basketball and lacrosse — the latter of which has earned her All-Metro recognition and a spot on Ohio State’s roster next season.

“Whenever we have free time, my brother and I always take on our parents in sports, whether it’s golf, basketball, tennis. Every single sport,” Amani said.

It’s an athletic IQ that Doxey, who also serves as Collegiate’s athletic director, said both Amani and Collin share.

Collin, a junior who also plays basketball and baseball, has a save percentage in net edging toward .900 and kept the Cougars in Tuesday evening’s soccer match.

It was the first time this season that Collegiate (16-0-1) hadn’t won a game — but for St. Christopher’s (9-3-3) the tie still wasn’t enough to deny the Cougars the Prep League regular-season title.

“We haven’t won the league in I don’t even know how long, so we’re excited to do that,” said Collegiate coach Rob Ukrop. “That’s a well-organized team. They’ve had our number for the last 10 years or so.”

The Saints have been battling injuries to key players all season. Although they’re still missing a captain, coach Jay Wood said he feels his team has come together to make a significant push through the duration of a game.

Wood said his team has “rediscovered” keeping the other team at bay, building off a 2-0 win over Norfolk Academy last Friday.

Its defense slowed down a Cougars offense that has won 10 matches by more than three goals this season, and junior keeper Rex Alphen — who was named co-MVP when the Saints won the Menno Classic tournament in September — swallowed the shots that did break through.

“That’s been a big plus for us,” Wood said, “but now we just need to be clean in the back and try to get forward, too.”

The defensive focus was effective but draining, and both teams had chances late in the game, including a free kick on the Collegiate net in the final minute, but the draw held.

Ukrop, whose team was ranked No. 22 nationally in the Oct. 24 United Soccer Coaches Poll, said outcomes such as Tuesday’s are a “fair result” in soccer. And, while a 0-0 draw may not be the most exciting end score, the crowd of City Stadium certainly didn’t act like it.

“Both teams gave a great effort and the crowd was great,” Ukrop said. “Hopefully, both teams will build off this as we head into the state tournament.”

A last-second push from Benedictine forced the VISAA Division I championship game into overtime, but a pair of connections from Trinity Episco…

'PH is a problem': Patrick Henry powers past top seed Dinwiddie in Region 4B semifinal

The John Marshall and Petersburg boys basketball teams are scheduled to play in the inaugural Future Stars Roundball Classic Dec. 11 at Virgin…

Hopewell falls to Phoebus in Region 3A semifinals

Phoebus’ Jalen Mayo returned two interceptions for touchdowns, and the top-seeded Phantoms pulled away from Hopewell with 20 unanswered points…

Collegiate defender Will Neuner (20) falls during a high school soccer game on Tuesday, October 26, 2021 at City Stadium in Richmond, Virginia. 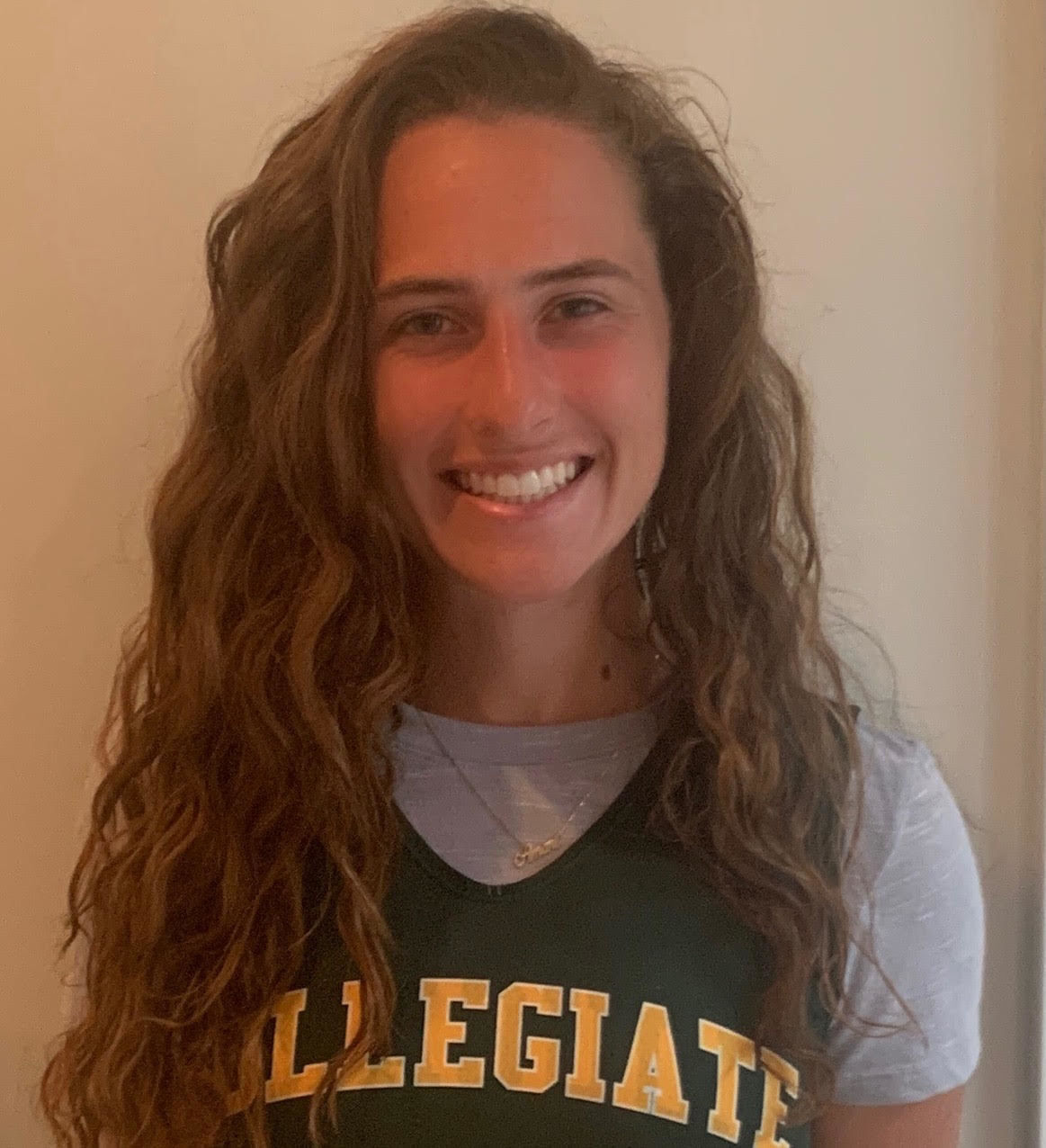 Collegiate’s Amani Kimball-McKavish helped the Cougars to a 4-0 win over St. Catherine’s in field hockey, then watched her brother, Collin, lock up a Prep League regular-season title in boys soccer.