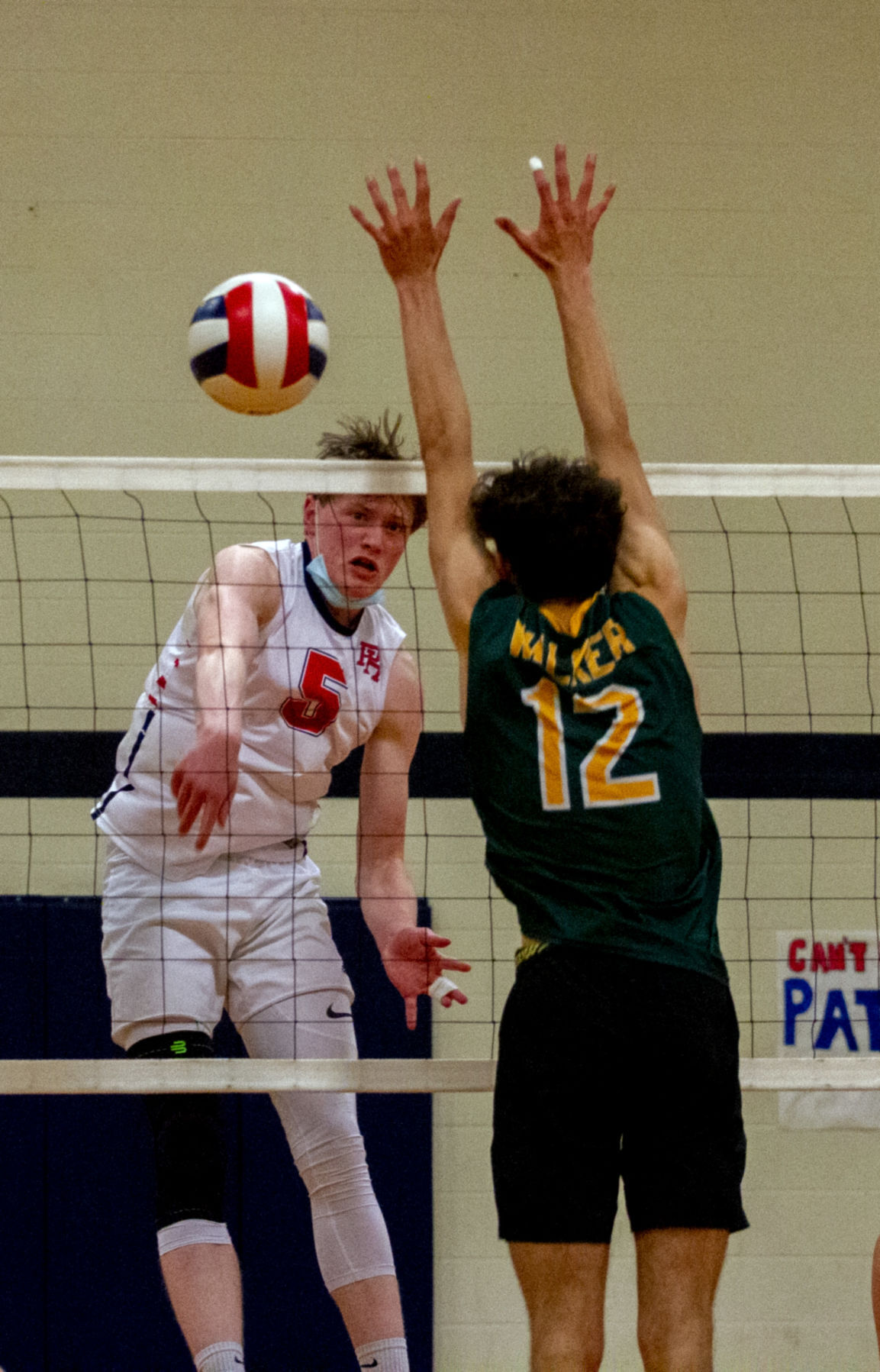 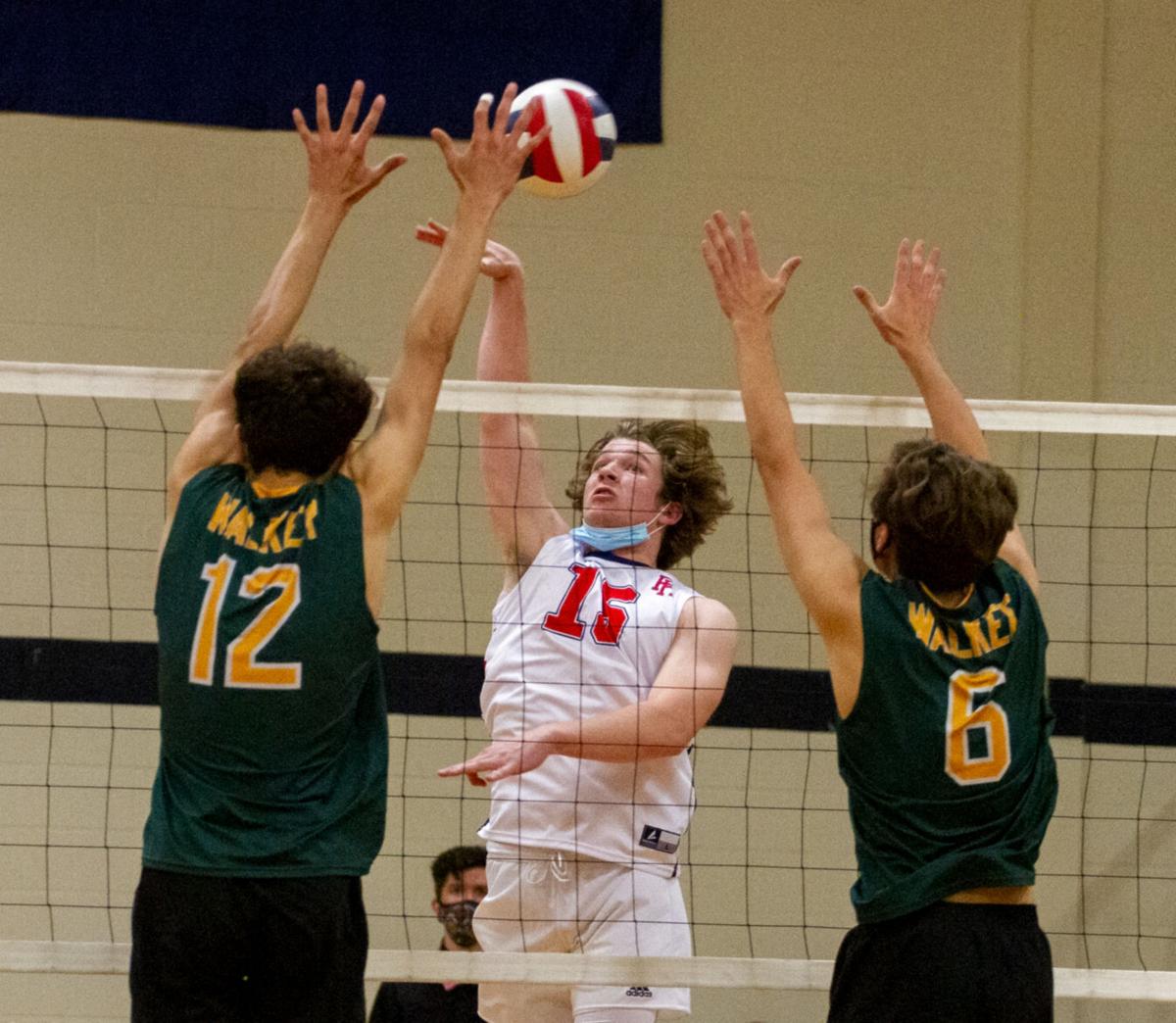 ASHLAND, Va. -- Patrick Henry's Cameron Miller (15) threads the needle between the outstretched hands of Reed Bonkovsky (12) and Gavin Telfer (6) in the Patriots' 25-11, 31-29, 25-19 sweep of the visiting Green Dragons for their fifth straight VHSL state championship. 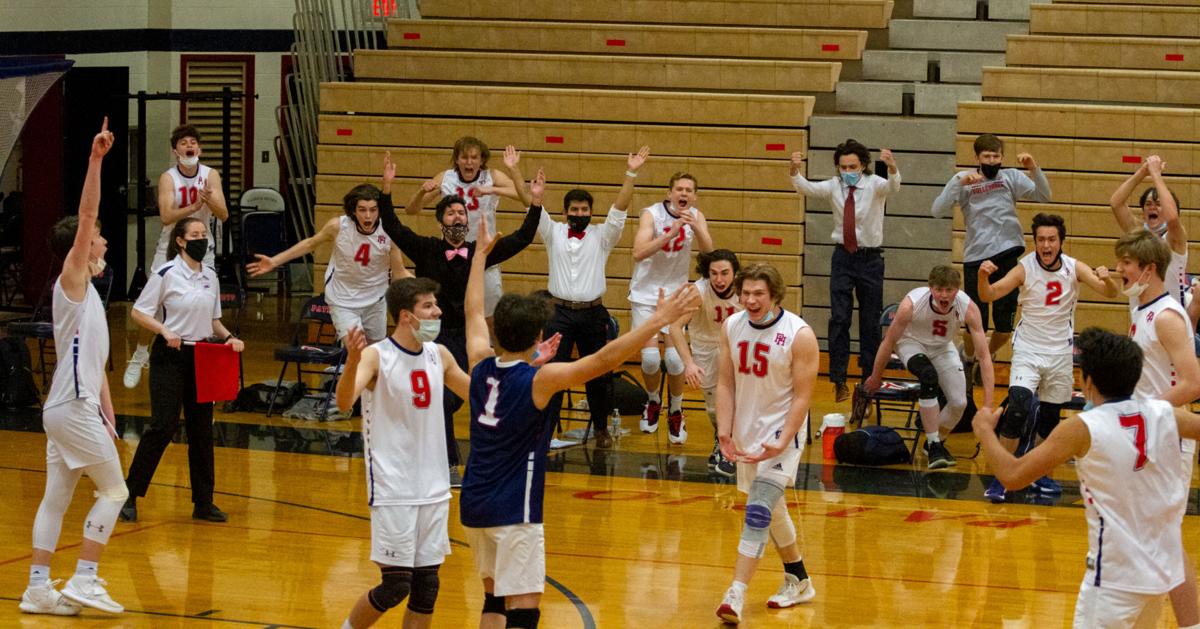 It’s not easy to find motivation for a team that has won four consecutive state championships in boys volleyball. But after a global pandemic and a major coaching change, a new group of Patrick Henry Patriots, who saw their regular season swept away in the fall, seized their opportunity.

“I was praying every night, I was begging for it,” senior Hill Sewell said of a possible return to the court. “Then I heard Wes (Bolyard) would be our coach and he’s taught us a lot of great things. It’s been a short season, but I’ve loved every second of it.”

Bolyard came to Patrick Henry during the long offseason to replace Michael Townsend, who retired in 2020 when he and his wife welcomed their second child. Bolyard watched Patrick Henry celebrate in 2019 when they defeated his Maggie Walker Green Dragons. Now, he watched the rematch unfold on the other side.

“Something I wanted to make these kids understand: four (titles) can make you cocky. If you want five, if you want six, you have to keep the pressure on,” Bolyard said.

The Patriots came out on fire, using a service run by junior Davis Luck to build a 12-3 lead en route to a 25-11 victory in the first set. The Dragons (11-4), settled down, forcing the second set into a slow grind. Patrick Henry built an 18-13 lead, but Maggie Walker responded with a 7-1 run for their first lead of the match at 20-19.

Bolyard watched with frustration as his Patriots earned, and lost, six consecutive set points, three of them by service error. But serving 30-29, his defense forced a middle kill attempt to go wide for the 2-0 match lead.

Maggie Walker had another run in them, stringing six points in a row to take an 11-9 lead in the final set. But senior Forrest Jones, who led the Patrick Henry middle attack, scored a pair of critical kills to place the Patriots in front for good at 18-15.

Match point was a Maggie Walker service error into the net, prompting Matt Carroll to continue a Patrick Henry legacy, diving onto the gym floor, a move made famous by Townsend, starting the celebration.

“They have some big boys on that team, and they can throw some blocks,” said senior Cameron Miller. “I had to settle in, know where I wanted to go with the ball, but they have a good defense.”

With the triumph, the short offseason begins, and with it, a new era in Class 4. County rival Atlee, the only team to defeat Patrick Henry this spring, moves into the classification. The Dragons will be back.

But Bolyard’s mention of the number six after the match shows that Patrick Henry, too, has plans to make more history, hopefully under normal season circumstances, come November.

ASHLAND, Va. -- Patrick Henry's Cameron Miller (15) threads the needle between the outstretched hands of Reed Bonkovsky (12) and Gavin Telfer (6) in the Patriots' 25-11, 31-29, 25-19 sweep of the visiting Green Dragons for their fifth straight VHSL state championship.