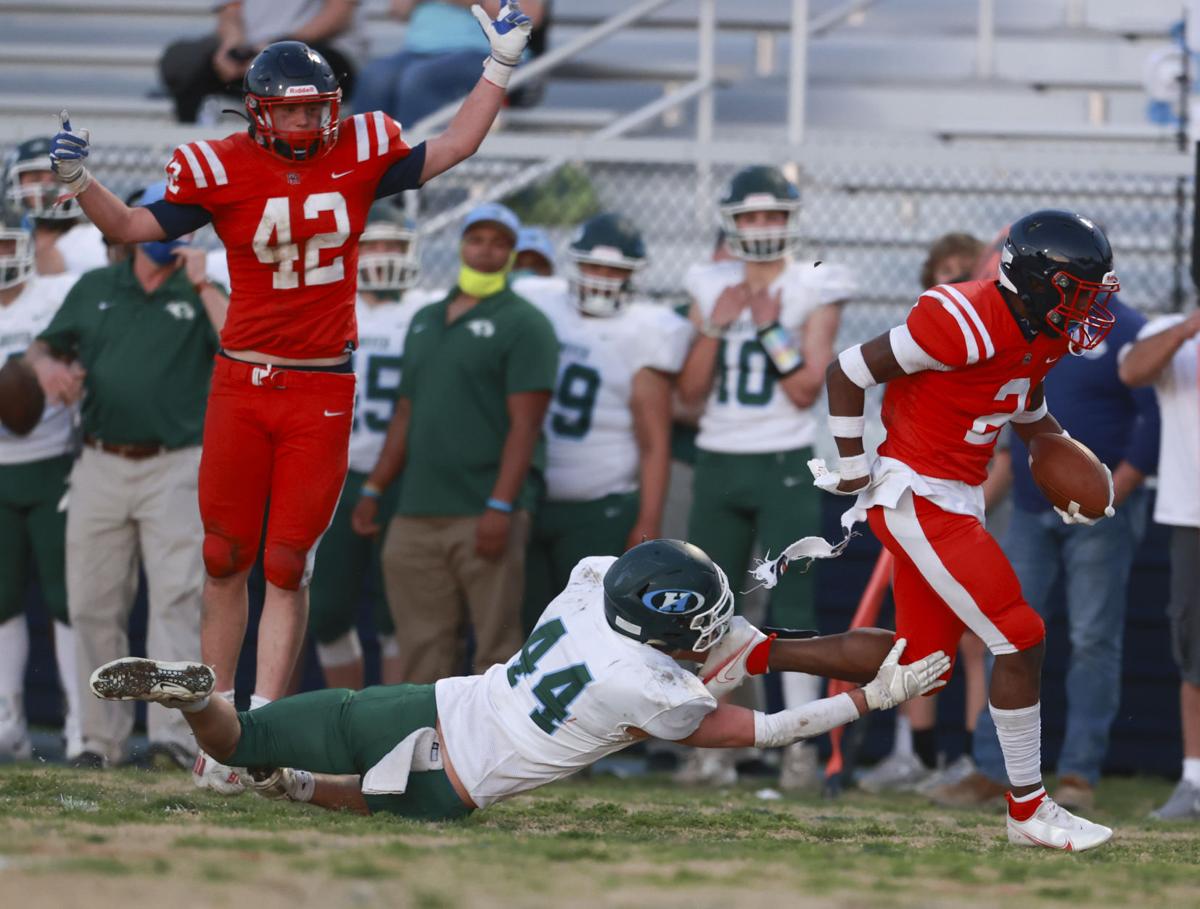 Patrick Henry’s James Epps (42) celebrates as Jayden Mines (2) rushes past Hanover’s Grady Fahed for a touchdown during the second half in Ashland on Friday. Mines totaled 67 receiving yards to go with the TD from QB Jordan Allen. 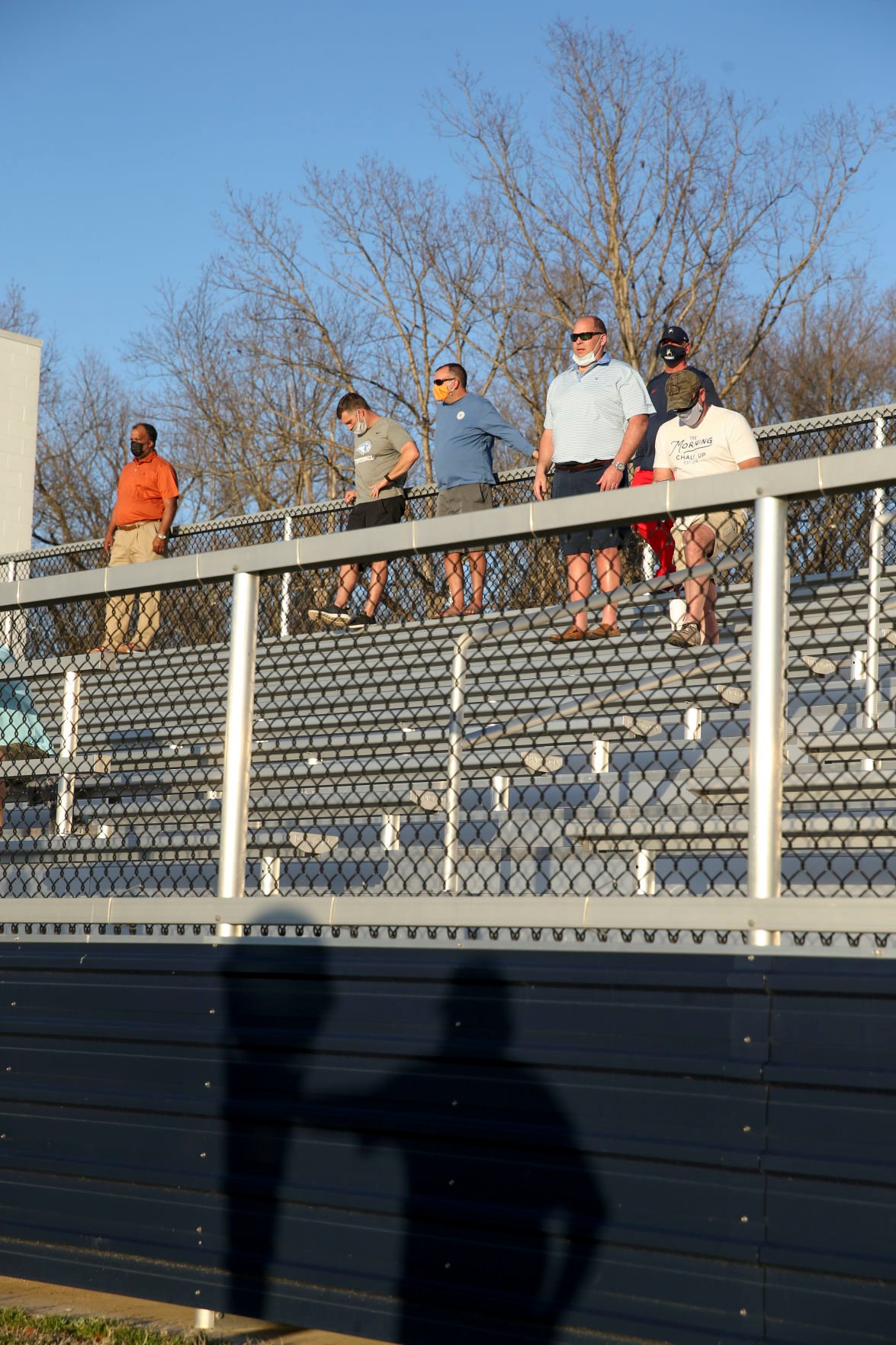 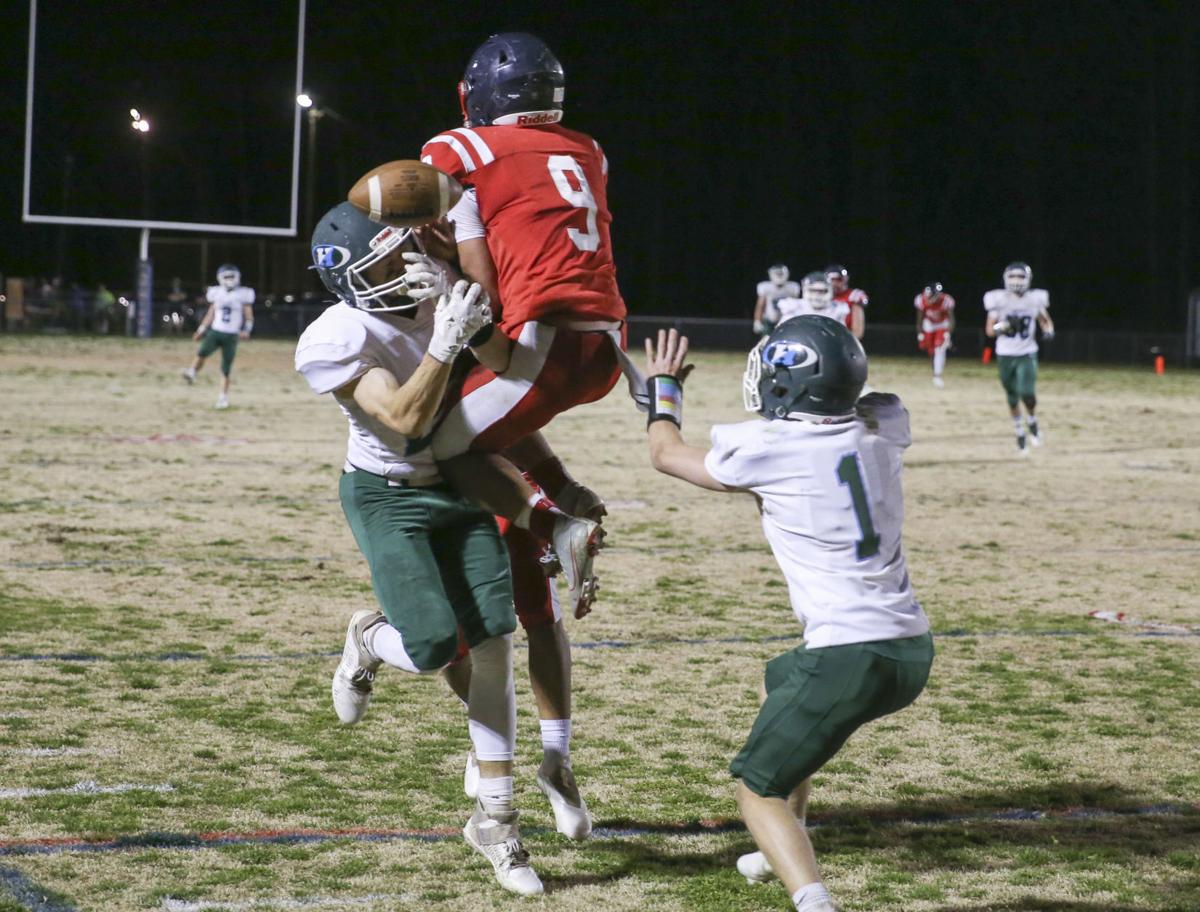 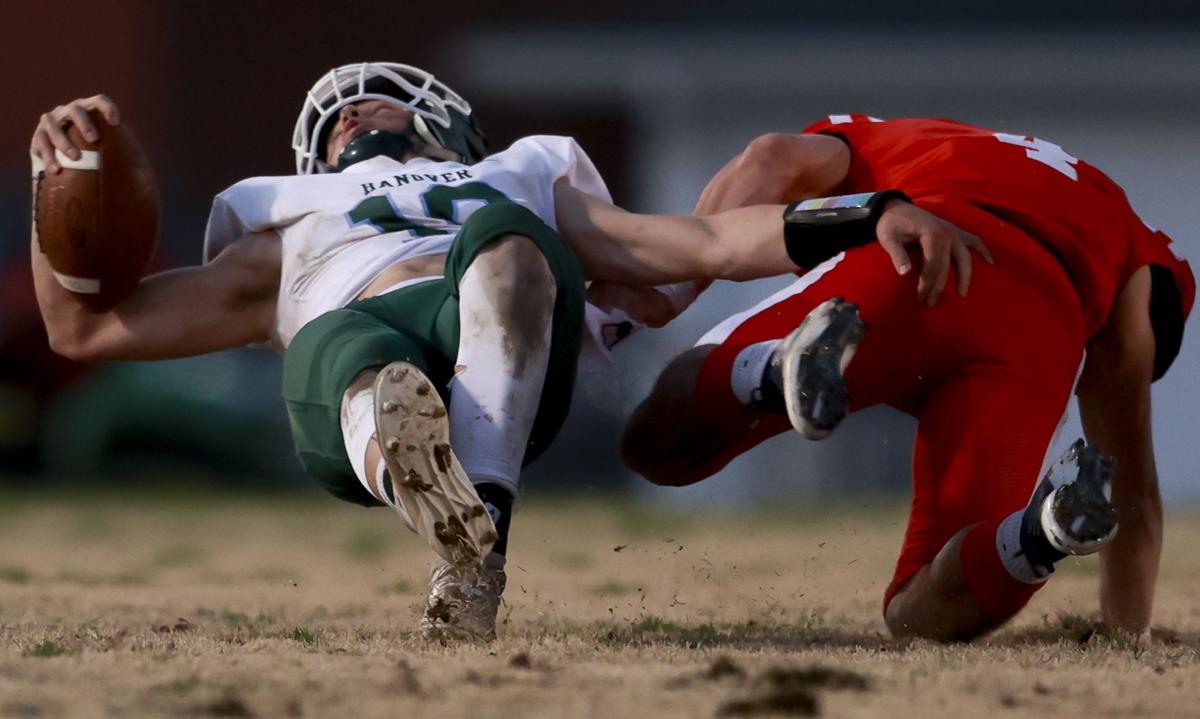 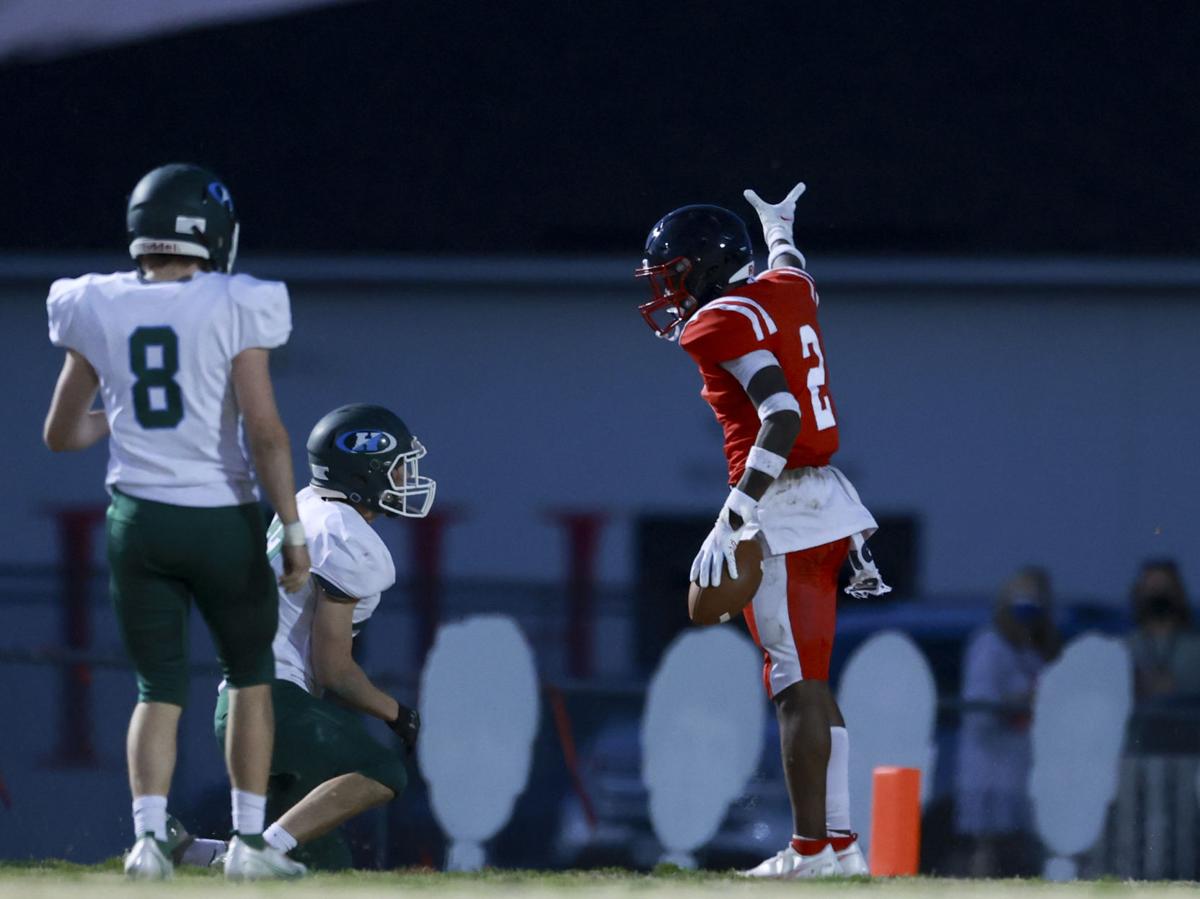 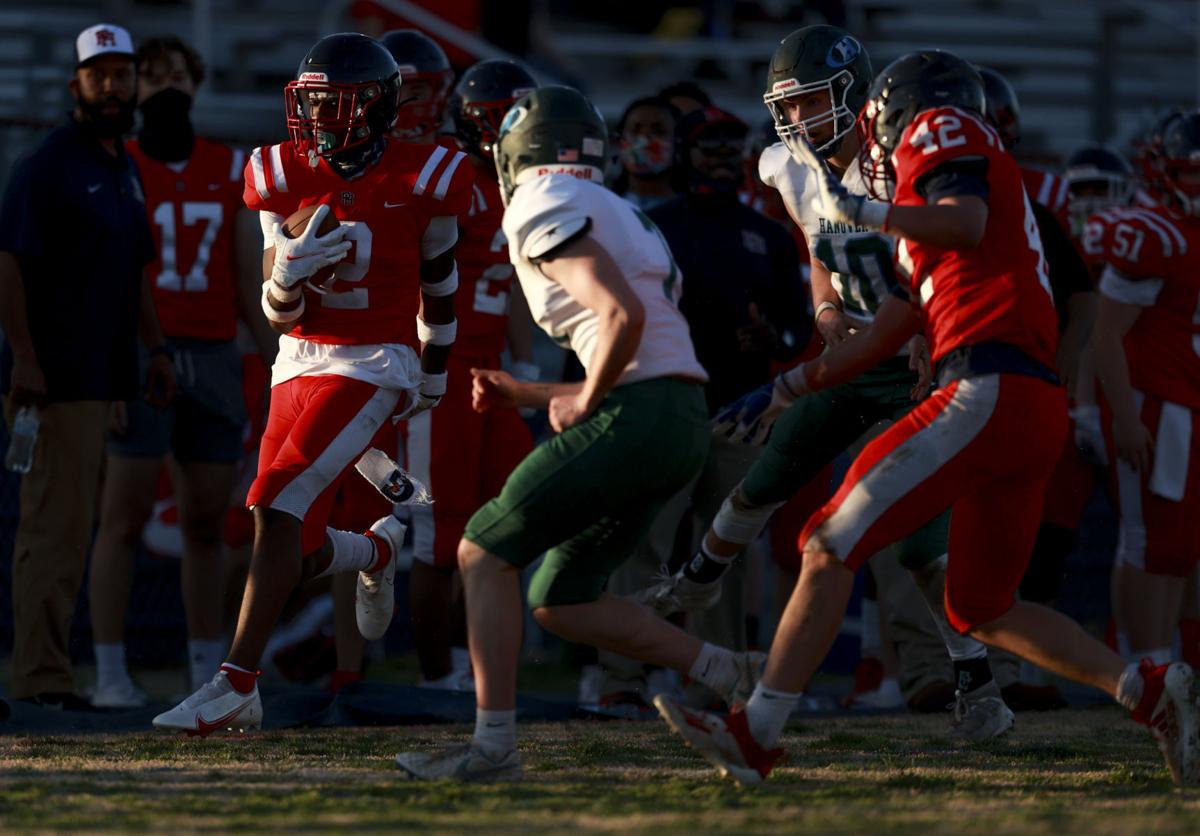 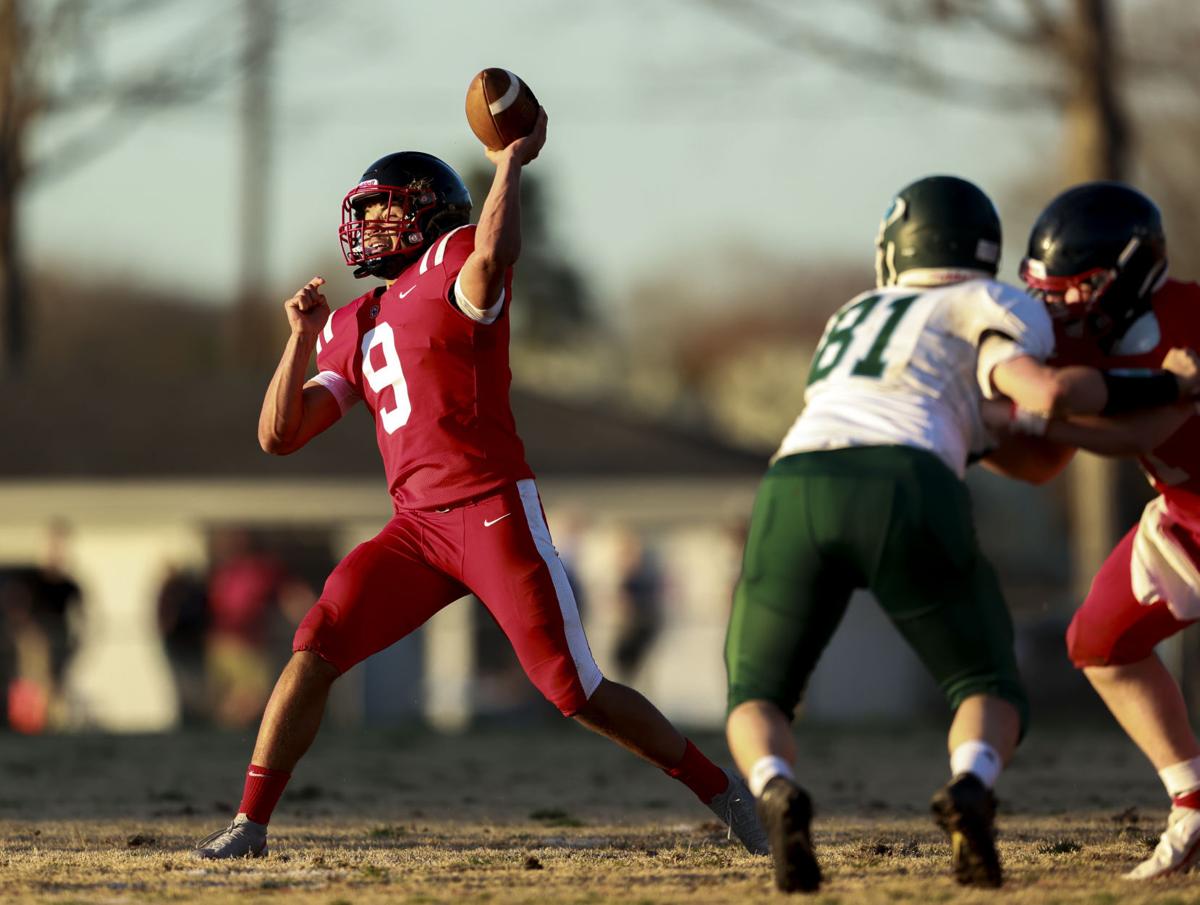 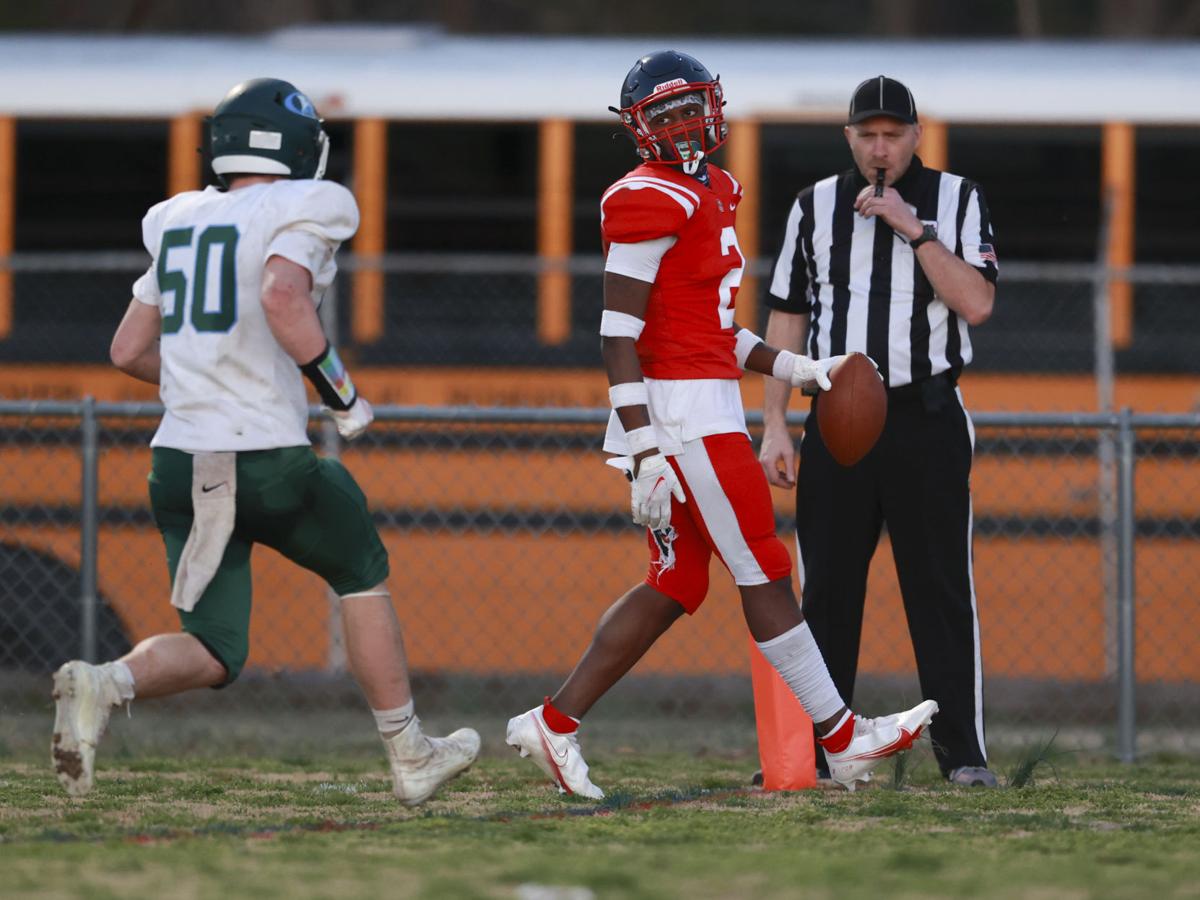 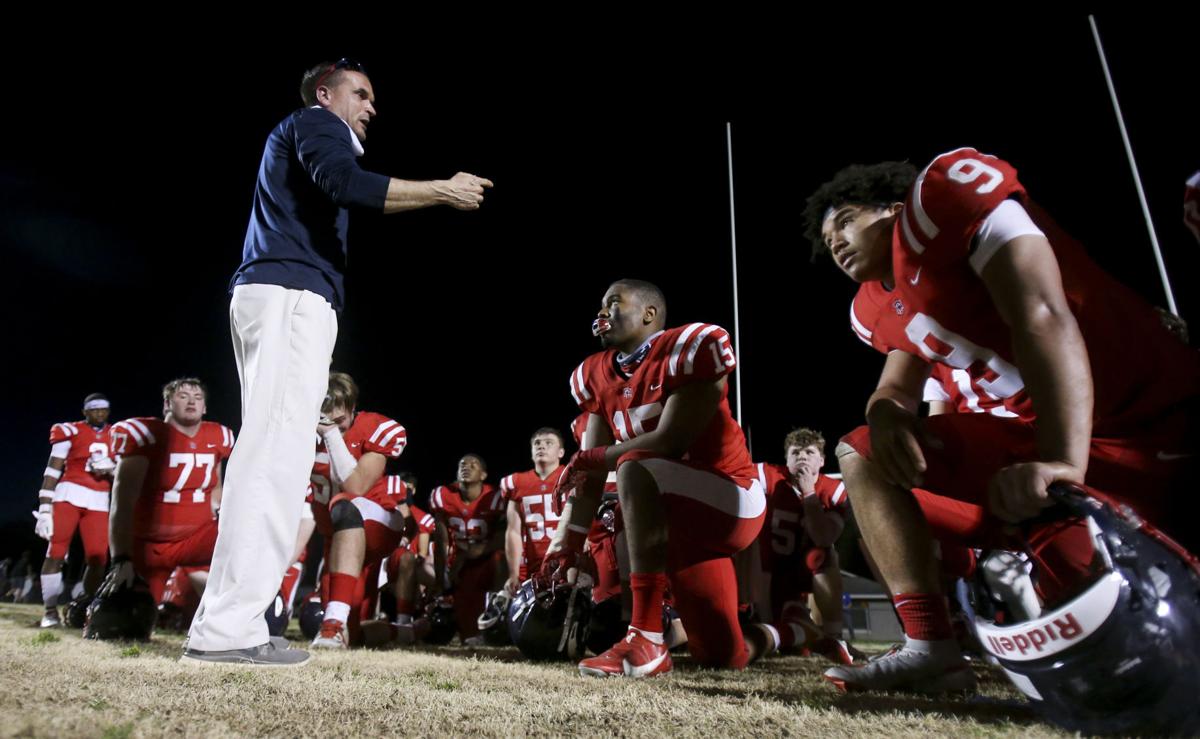 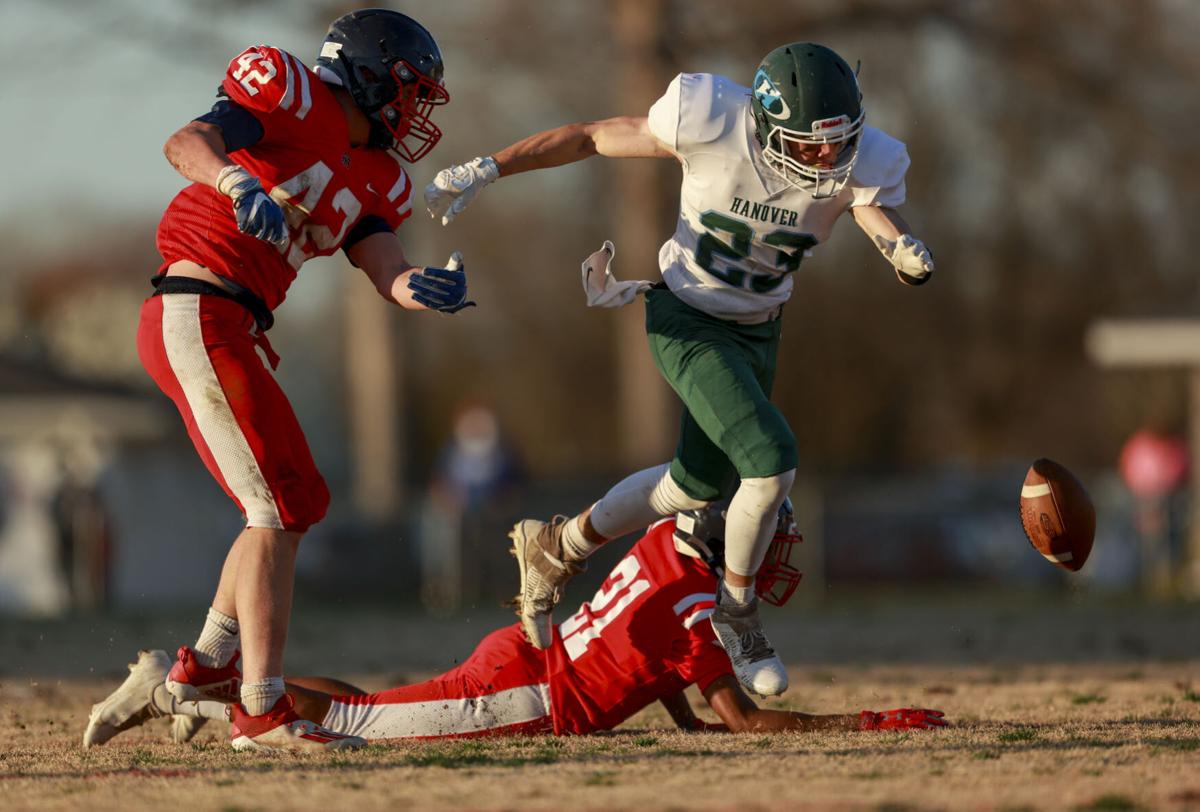 In Hanover County, every game is a fight.

That’s how Patrick Henry slotback Jayden Mines described the intensity of playing a local rival every week after his Patriots, ranked No. 8 in the T-D Top 10, moved to 5-0 with a commanding 16-0 win over Hanover (3-2) Friday night.

Those two, plus fellow Hanover teams Mechanicsville (0-5) and Atlee (2-3), are playing one another twice in this abbreviated six-game season.

Allen found Mines for a 22-yard score in the third quarter and added a 1-yard rushing touchdown in the fourth.

“You’re going to get the other team’s best foot forward,” Allen said. “Everybody wants to knock us off, we’re the team to beat.”

Allen and Mines have been playing together since they were about 5 years old, and that connection payed off Friday. Mines also had a leaping 44-yard reception down the left sideline to set up Allen’s TD run.

“We had a good running game going, but our running back got tired, so I had to make a play, stepped in and do what I gotta do,” Mines said of the catch.

Allen and Mines provided the dynamic plays on the night, but Patrick Henry leaned on a dominant defensive effort and hard-nosed rushing attack. Lead back James Epps carried 19 times for 92 yards, and the Patriots defense held the Hawks attack to 146 yards of total offense. Patrick Henry converted 16 first downs and limited Hanover to seven.

“It’s a team effort, it’s not one guy,” said Patriots coach Ken Wakefield of the defensive effort, adding that his group was banged up in the secondary and had some young players step up.

“I’m really proud of those guys because they hit adversity and played well.”

Behind disruptive play from lineman Luke Hart, Hanover matched Patrick Henry’s defensive intensity blow-for-blow in the first half, and the game was scoreless at the break.

Wakefield said his team just needed to calm down at halftime.

“Sometimes, emotions go high, in that first half things weren’t going our way,” Wakefield said. “I just said relax, settle down, and we’ll play football and execute. We came out in the second half and that’s what we did, took the ball, drove down the field and executed.”

Behind a series of rugged runs from Epps and Allen, Patrick Henry opened the second half with a 13-play, 75-yard drive that ended in Mines’ touchdown catch.

Mines said, before the play, he was frustrated because his offense had struggled to get going. He caught the ball by the left sideline not far from the line of scrimmage, and made a slew of Hawks defenders miss on his way to paydirt.

For Hanover, quarterback Brandon Elrod completed 7 of 19 passes for 53 yards and an interception and rushed 15 times for 45 yards. He took a bevvy of hard hits and was never afforded much time to push the ball downfield.

Charles Rohr was the Hawks leading receiver with two catches for 34 yards, and Emory Farmer carried five times for 37 yards. It looked as though Farmer had scored on a 15-yard screen play in the second quarter, but it was called back for an ineligible man downfield.

That play could have altered the complexion of the contest had it stood. Hanover missed the ensuing field goal attempt and never threatened to reach the end zone again.

Patrick Henry’s James Epps (42) celebrates as Jayden Mines (2) rushes past Hanover’s Grady Fahed for a touchdown during the second half in Ashland on Friday. Mines totaled 67 receiving yards to go with the TD from QB Jordan Allen.