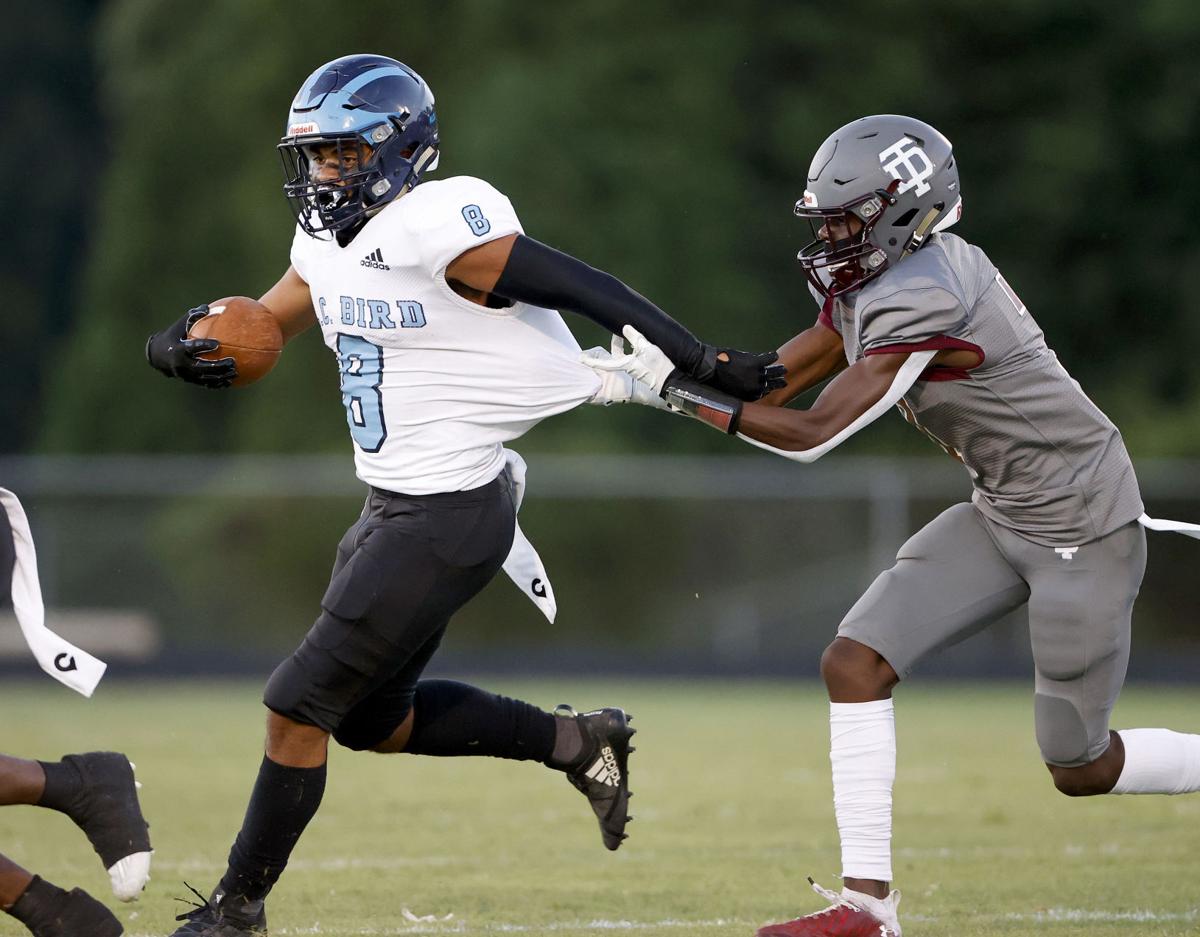 L.C. Bird’s Trevor Schultz, left, is stopped by Thomas Dale’s Zaquan Wallace during the first half of a high school football game in Chester, Va., on Thursday, Sept. 2, 2021. 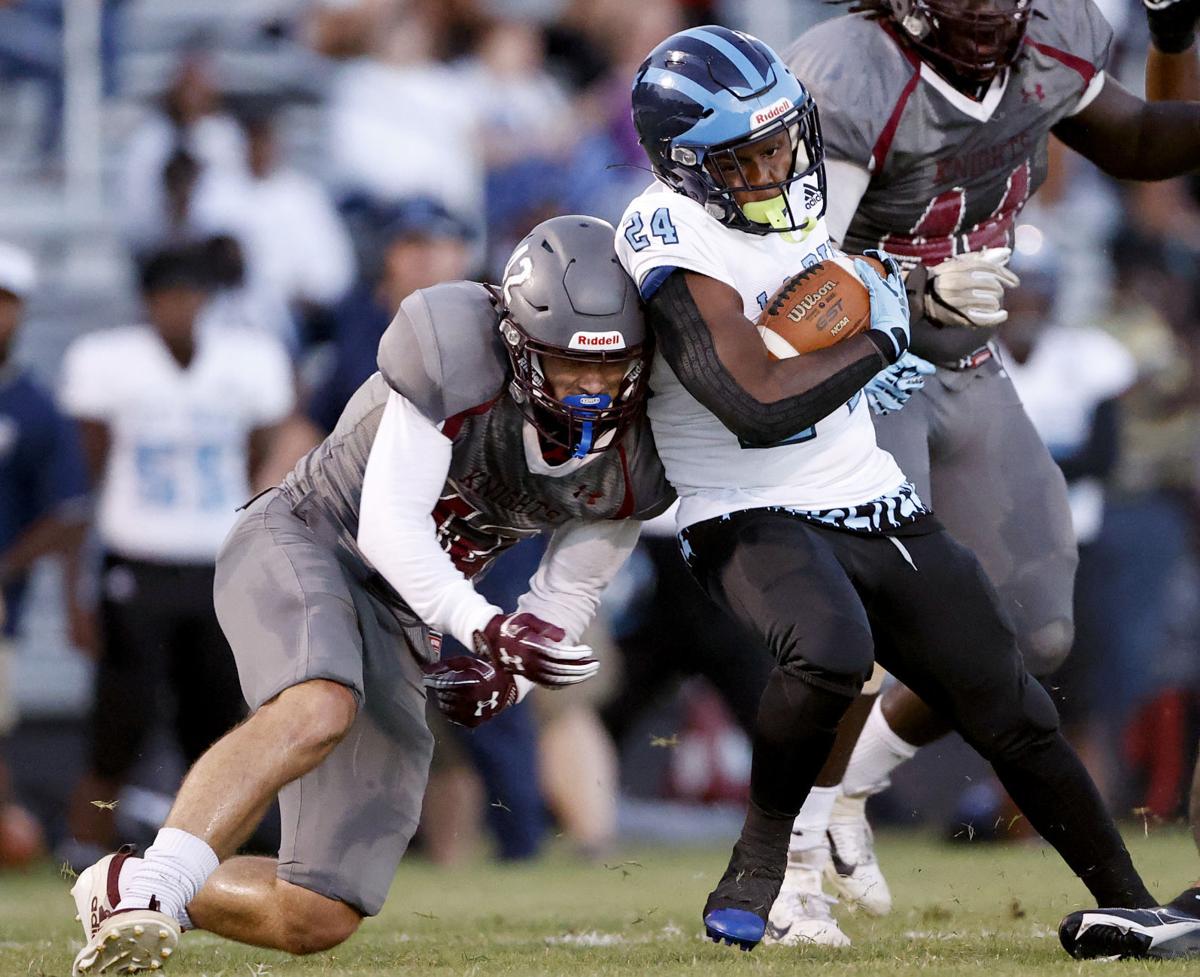 Thomas Dale’s Brandan Cammarasana corrals L.C. Bird’s Alvin Townes-Fox in the first half of the Battle of Chester. The Knights improved to 2-0 this season with a 26-7 victory Thursday. 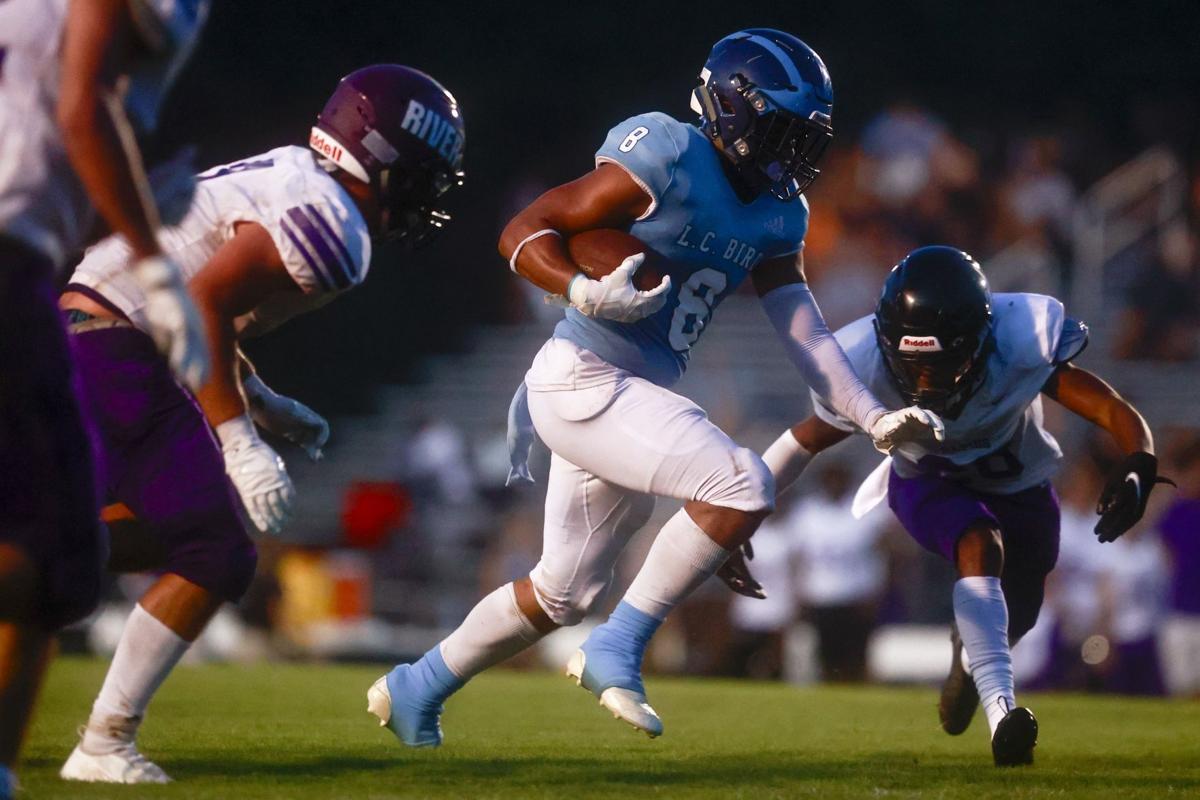 A rocky start to the high school football season in Chesterfield County has included COVID-19 cases at Thomas Dale High, and then an apparent false alarm at Midlothian this week.

L.C. Bird was the opponent in both cases.

Bird was scheduled to play Midlothian Friday, but that game was postponed Wednesday afternoon. Hours later, Bird appeared to have scheduled Meadowbrook, Thomas Dale’s original opponent for this week, to replace the Midlothian game. But later that same evening, the game between Bird and Meadowbrook was called off, and the Midlothian vs. Bird game was back on.

The Thomas Dale program has been paused since playing Bird Sept. 2.

“After their contest last week, the Midlothian High School varsity football team paused their program as contact tracing was done while awaiting clarification about a COVID test,” Smith wrote in a statement.

“After getting clarification from the health department on Wednesday, it was determined that no positive case had existed. As such, no action with required quarantines for this team was necessary. In turn, while the team was waiting on this clearance, all avenues to allow Bird’s team to still have the opportunity to play were being explored. Once clearance was given, the originally scheduled game was continued for Friday evening versus other options being explored.”

Chesterfield Health District director Alexander Samuel provided further details on how a test initially perceived to be positive was later determined to be false.

“The individual initially tested positive with a rapid antigen test and within 24 hours took a much more accurate PCR test, which came back negative,” Samuel wrote in an email.

“Hence the rapid test was a false positive. The team, which had been sidelined because of potential exposures due to the [now negative] player, is now able to play.”

Dale played Bird on a Thursday and announced the following Sunday that its game the next week against Hermitage had been postponed.

“This school year and season have brought with them many challenges that will require us to continue to persist, exercise patience, and ultimately, persevere. Our resilience and willingness to stick together, especially during tough times, are what make our school unique,” the email to Dale football families read.

“VDH has reviewed reported cases and recommended that the Thomas Dale Varsity football team remained paused for the remainder of this week. Eligible staff and students may return beginning on 9/20/21. I look forward to your children returning and continuing the sport they so truly love.”

L.C. Bird has continued on, though not without concern from parents.

On Thursday, The Times-Dispatch received calls and texts from five different parents of players on the Skyhawks team, unhappy that the district is proceeding with games.

Three of the five L.C. Bird parents said they wished to remain anonymous to keep their children out of the matter.

“This is the second game they’ve done this stuff and put our kids at risk,” said Bird parent Sarah Kerekes. “Personally, I’ve spoken to a lot of parents, and I know we’re all in agreement.”

“Bird is being treated so unfairly,” said Tracy Portz, another Bird parent, via text. “We shouldn’t be asked to put our children’s health at risk or forfeit a game.”

L.C. Bird’s Trevor Schultz, left, is stopped by Thomas Dale’s Zaquan Wallace during the first half of a high school football game in Chester, Va., on Thursday, Sept. 2, 2021.

Thomas Dale’s Brandan Cammarasana corrals L.C. Bird’s Alvin Townes-Fox in the first half of the Battle of Chester. The Knights improved to 2-0 this season with a 26-7 victory Thursday.