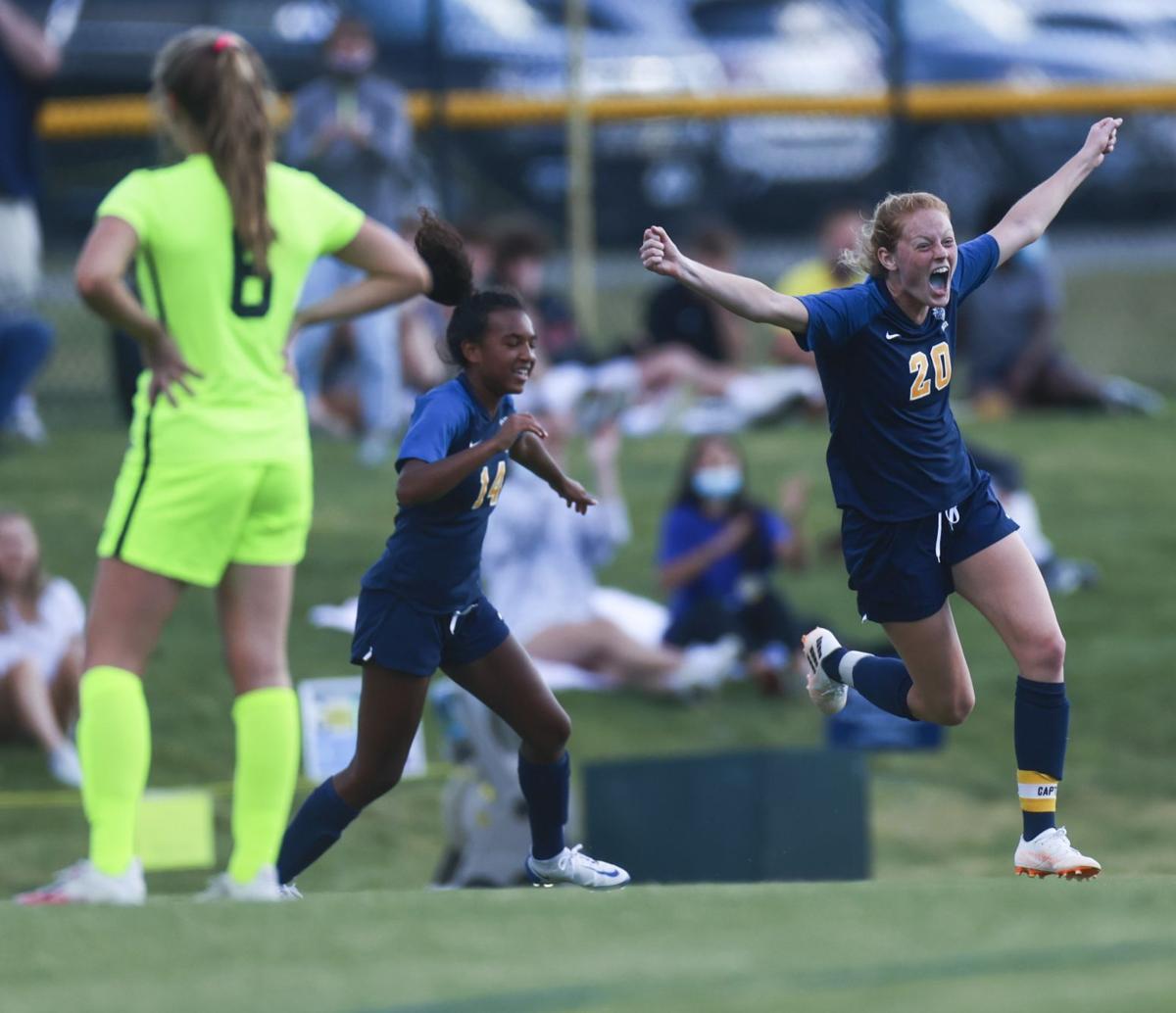 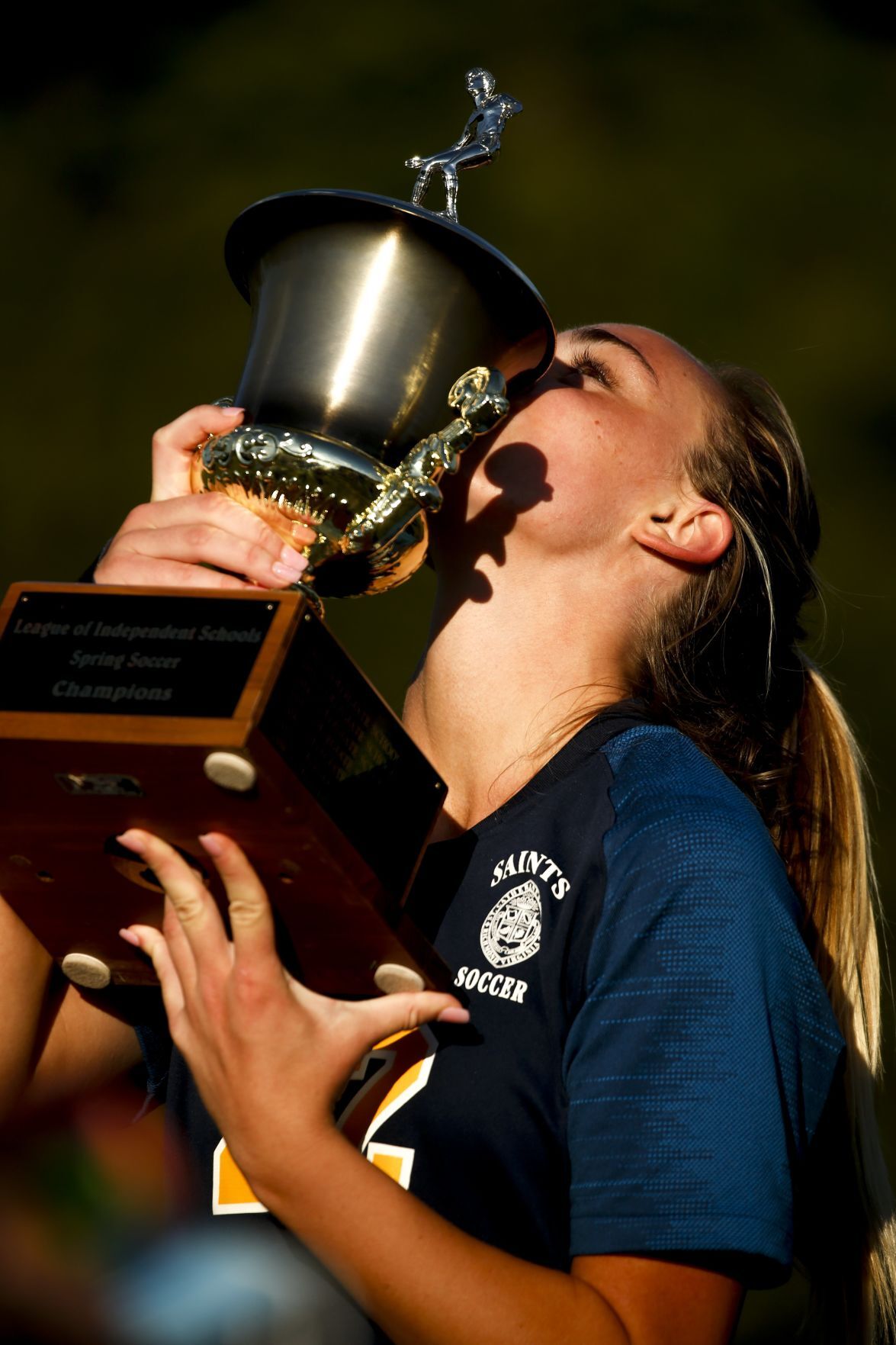 St. Catherine’s Sophia Connell kisses the LIS trophy after beating Collegiate. Coach Laurie Marshalek said Connell, who tied the game in the second half, “has the ability to change the game every time she touches the ball.” 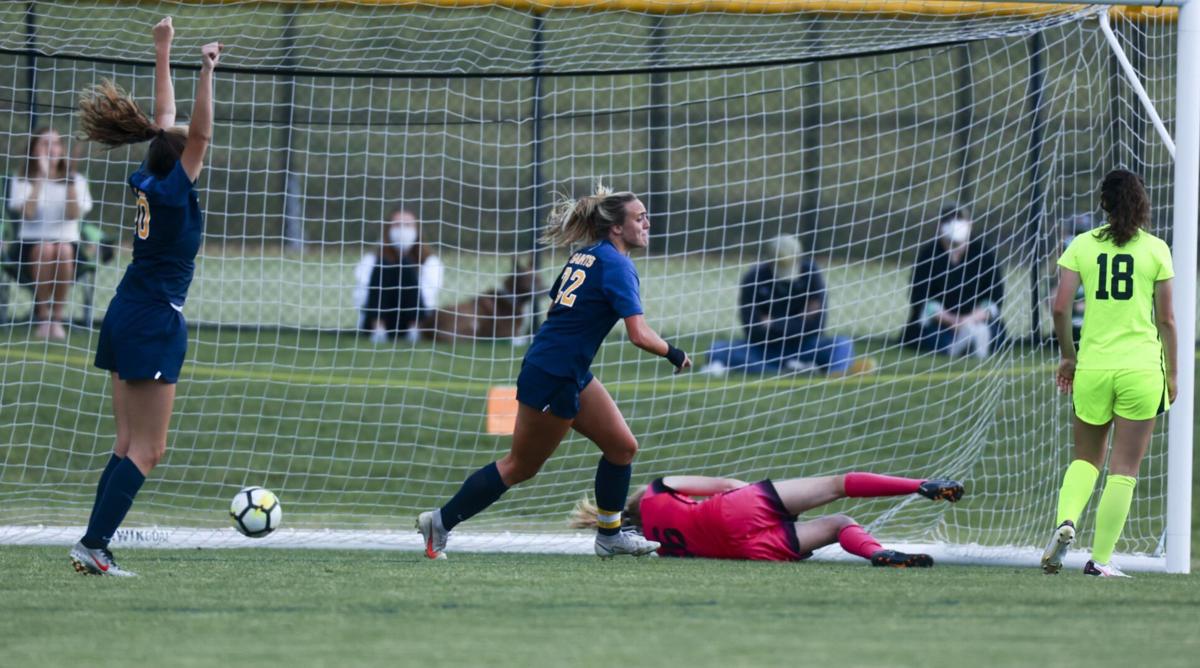 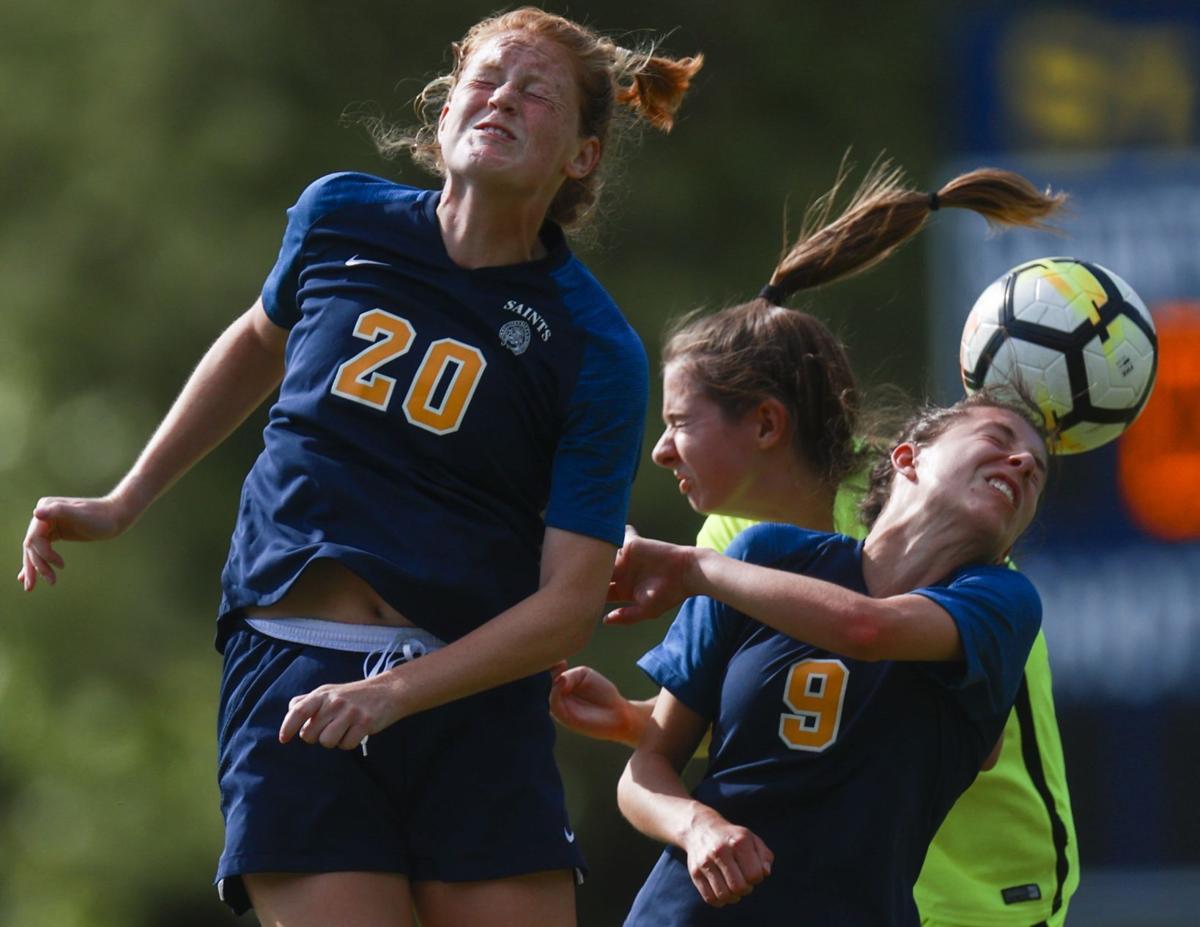 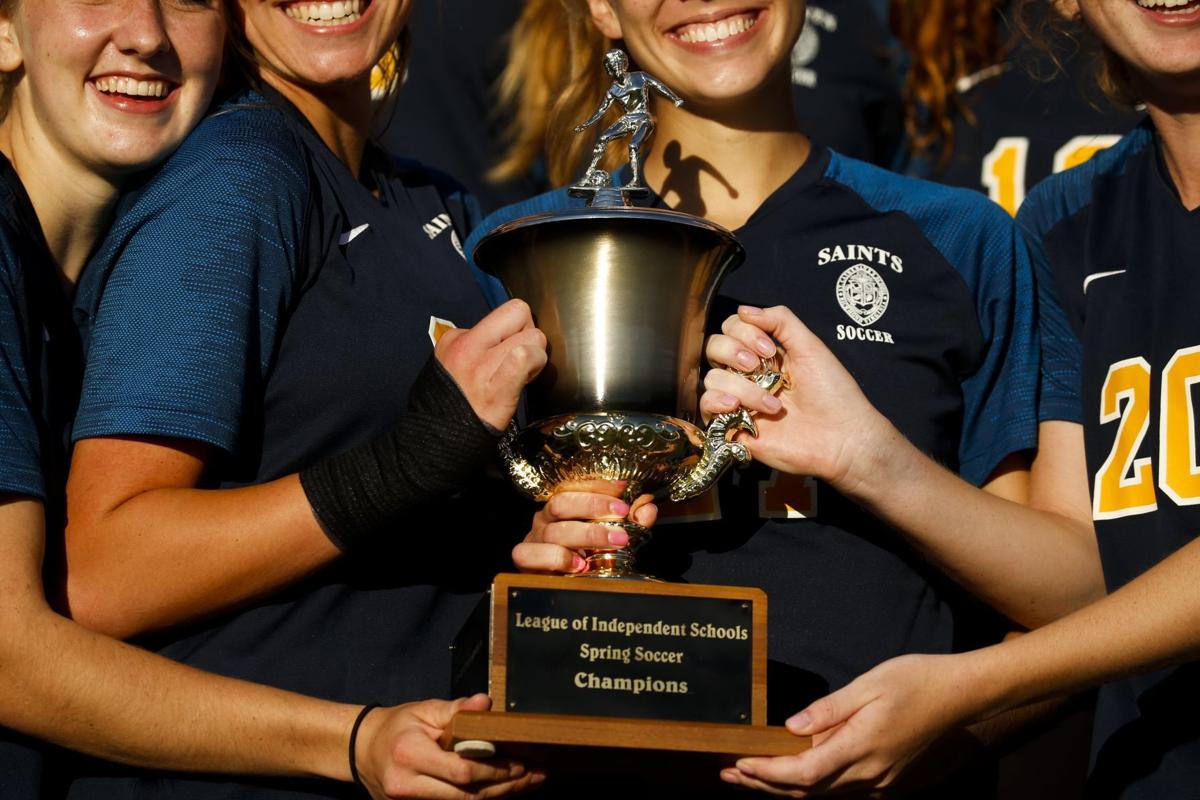 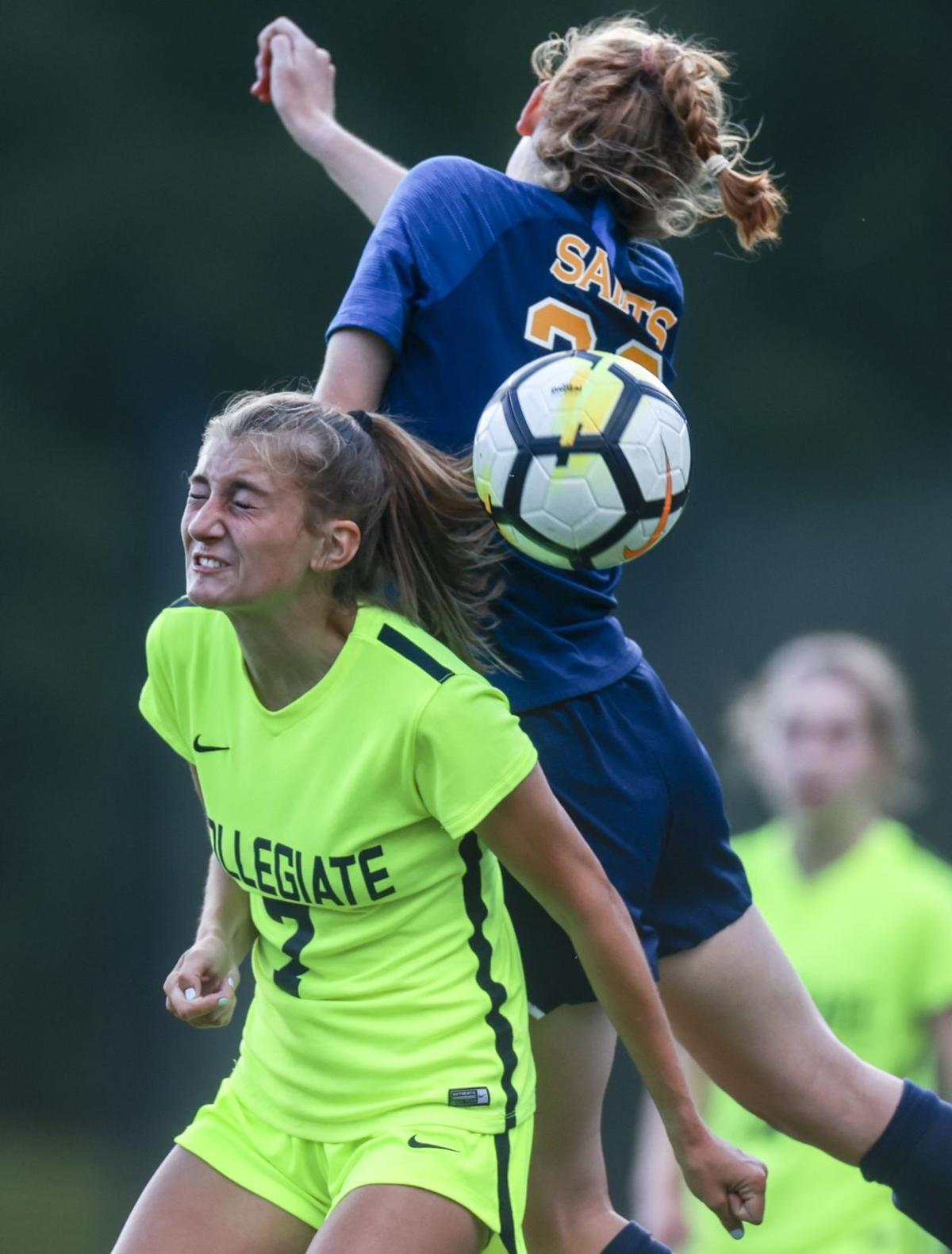 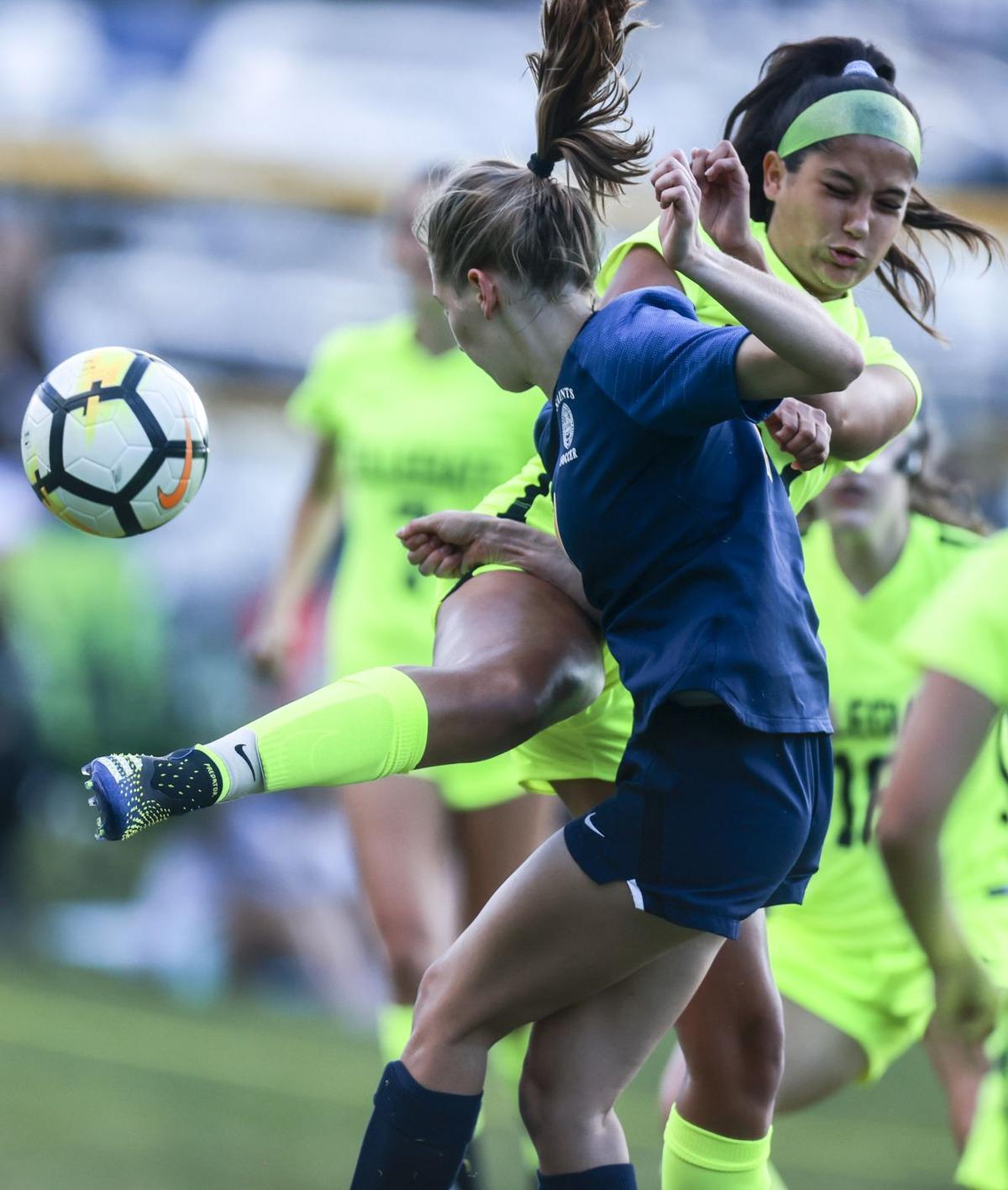 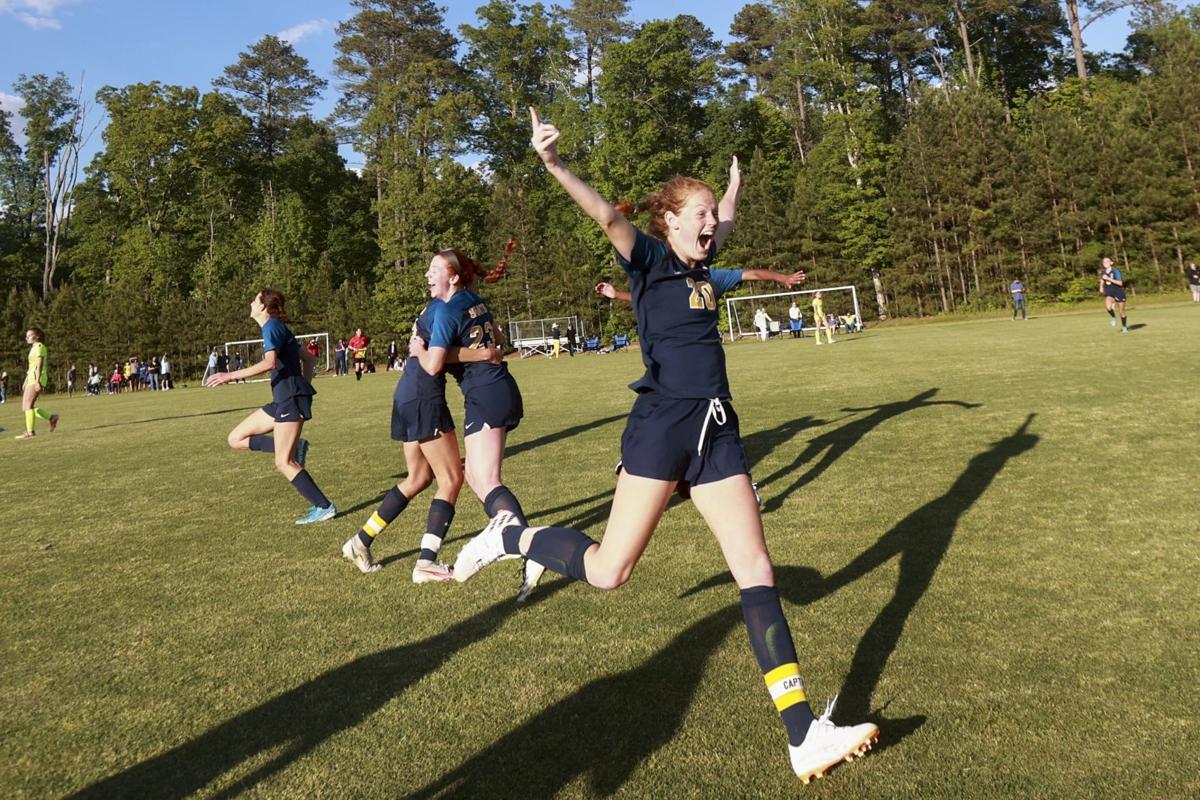 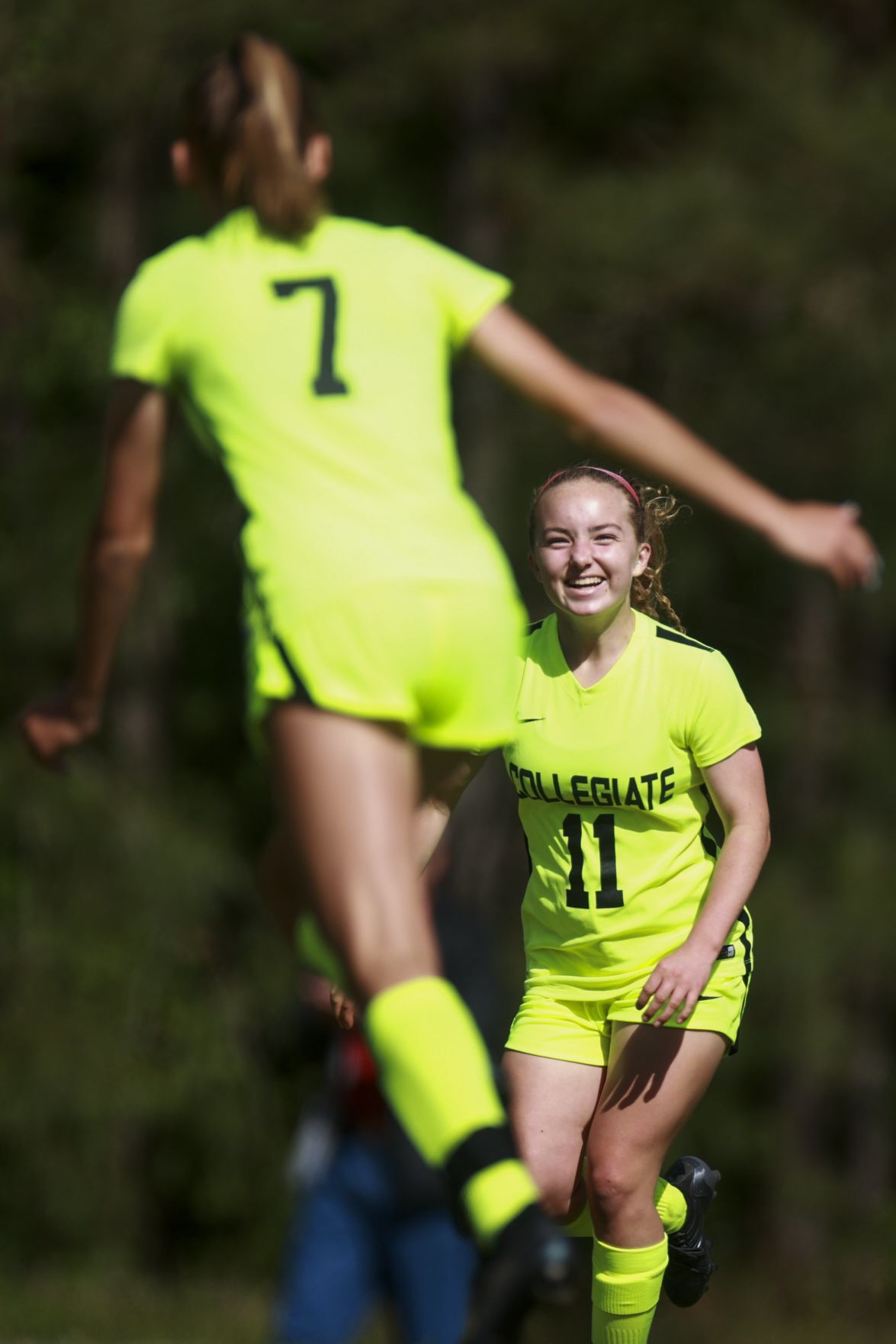 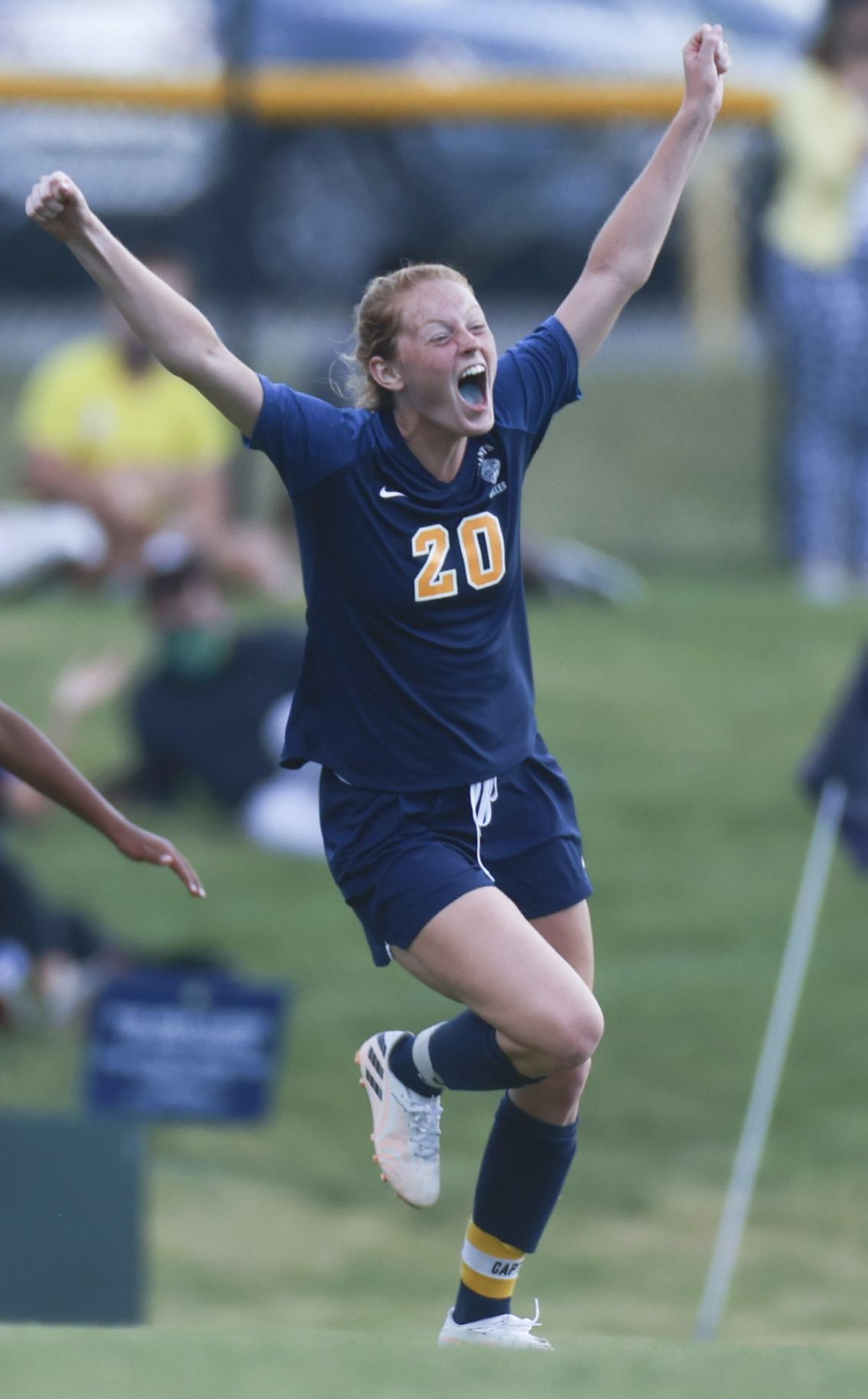 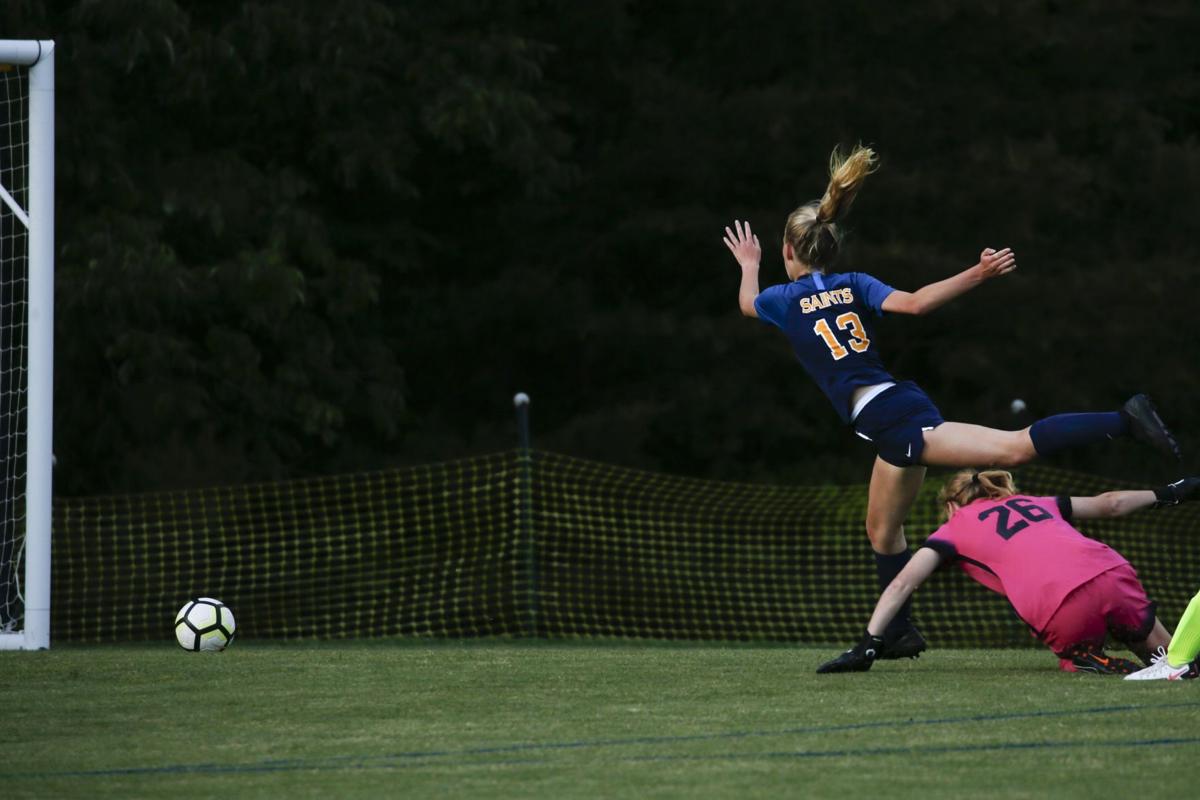 St. Catherine’s also bested Collegiate 1-0 in April, so the Cougars were hoping the third time would be the charm.

And early on, it looked like Collegiate had indeed flipped the script. Dynamic freshman midfielder Kenley Campbell scored in the 10th minute to give the Cougars an advantage. Senior forward Emma Barrett made it 2-0 20 minutes later on a stellar individual effort, taking a breakaway off a Saints corner all the way to the other end to beat the keeper one-on-one.

Collegiate controlled the game in that first half, peppering the St. Catherine’s goal with attempted shots and commanding a majority of the possession.

Saints coach Laurie Marshalek told her team at halftime that the deficit was an opportunity to “show what they were made of.”

“The first half was probably the worst half our team has played all season,” Marshalek said. “But once we regrouped at halftime, they came back with so much determination and passion, it was impressive.”

Everything changed when Saints senior defender and captain Sophia Palumbo sent a free kick into the box 10 minutes into the second half. The ball bounced off the head of a Collegiate defender, and settled at the feet of senior captain Emma Mitchell, who waited a split second to let it bounce before sending a half-volley into the upper right hand corner of the net for a top-shelf finish.

“Right when she scored, everybody’s morale went up,” Palumbo said. “We knew that we were still in it.”

The score certainly appeared to galvanize the Saints, who equalized just seven minutes later on a rocket of a shot from outside the box by senior captain Sophia Connell.

“She has the ability to change the game every time she touches the ball,” Marshalek said.

The match picked up in physicality from that point on, with Palumbo and Saints keeper Talley Applewhite trading clearances with the Marianna McComb-led and equally stout Collegiate back line.

Neither side generated another clear chance until the end of the first period of extra time.

Connell bodied her defender to receive a long pass on a counterattack, and played a savvy ball into space down the left side to tee up McAdoo, and the freshman didn’t flinch in slotting home the finish past an onrushing keeper.

“She really just stood up, she crushed it, she did an amazing job,” a breathless and beaming Palumbo said of of McAdoo after celebrating with her teammates.

Marshalek added that her Saints’ greatest strength is that they’re not reliant on one player.

“We have several players who are scoring threats, and defensively, from our keeper all the way to our three backs, it takes a whole unit to put it all together,” Marshalek said. “Just an impressive win against a very talented Collegiate team.”

The Saints and Cougars both qualify for the state tournament, so a fourth meeting between the local rivals, this time for all the marbles, could be in the cards next week.

St. Catherine’s Sophia Connell kisses the LIS trophy after beating Collegiate. Coach Laurie Marshalek said Connell, who tied the game in the second half, “has the ability to change the game every time she touches the ball.”