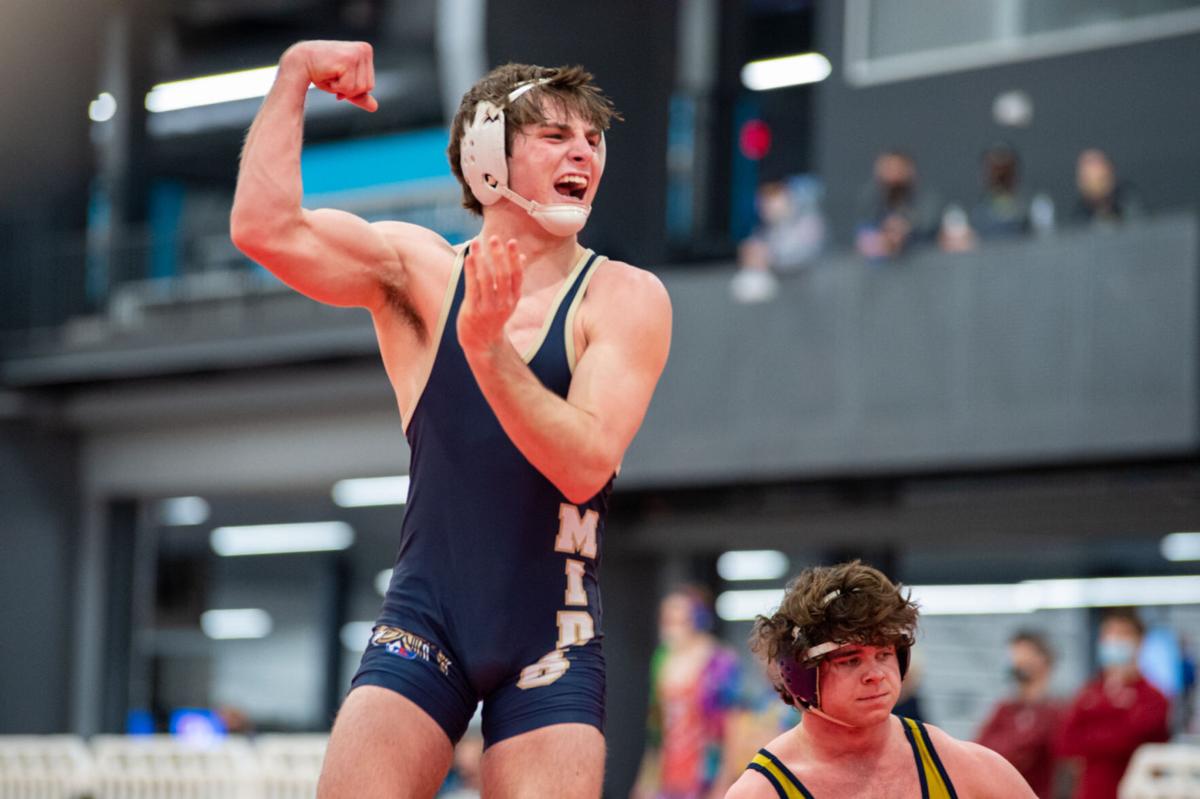 Midlothian’s Crew Gregory celebrated his victory over First Colonial’s Nicholas Goenner in the 160-pound class in the VHSL Class 5 wrestling finals at the Virginia Beach sports center on Saturday. 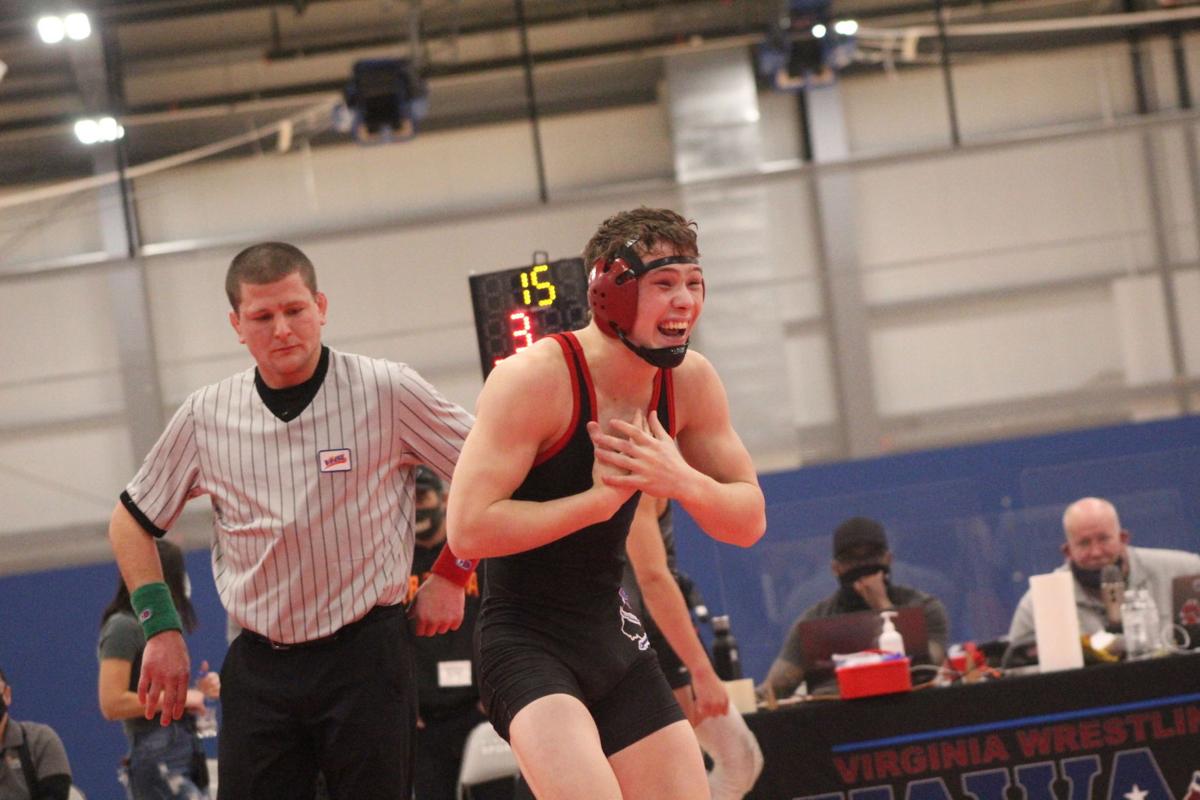 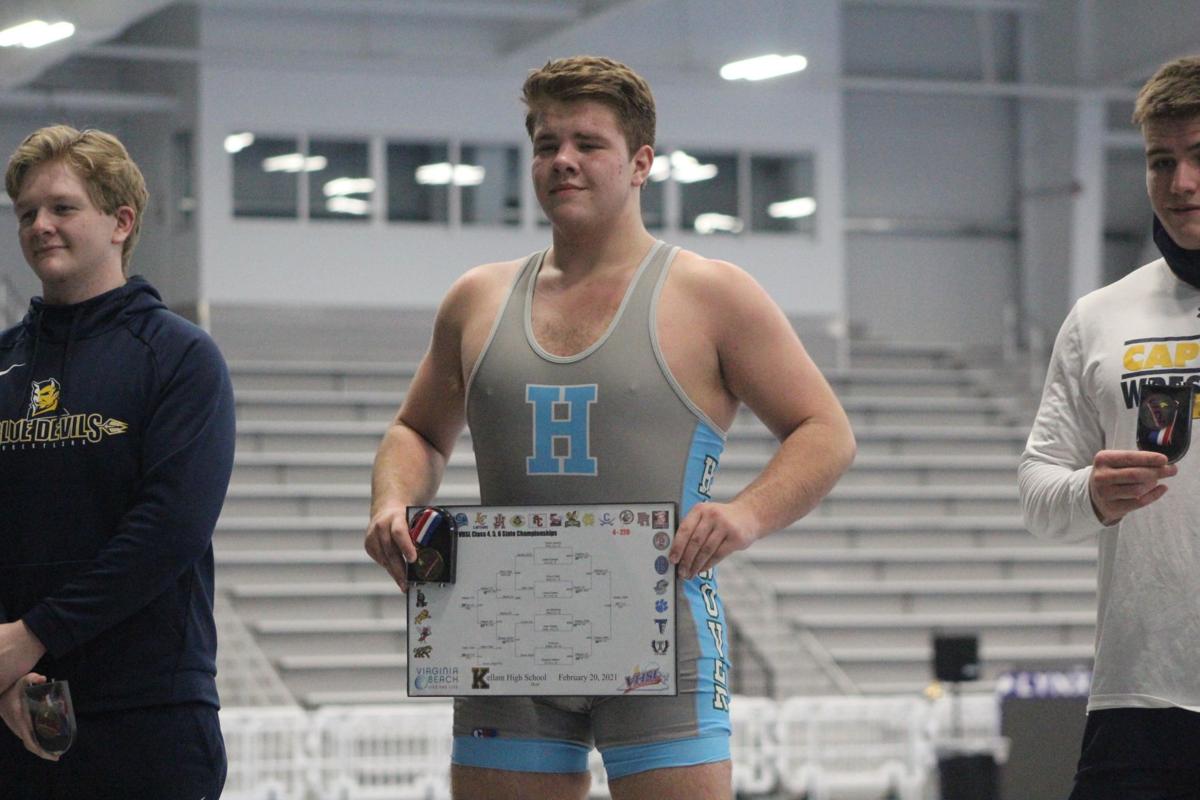 Hanover’s Aden Halsey stands atop the podium as the 220-pound Class 4 state champion. 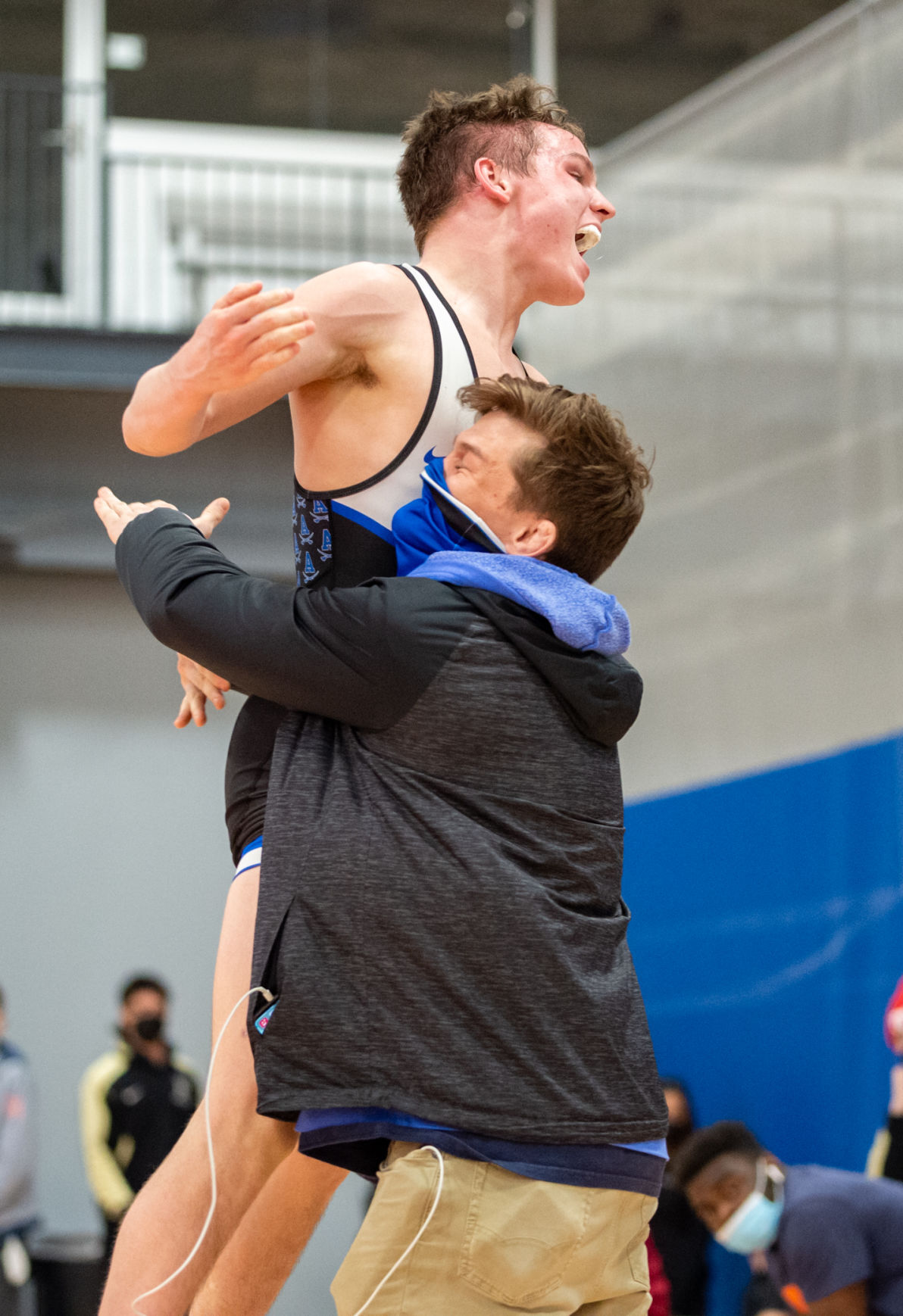 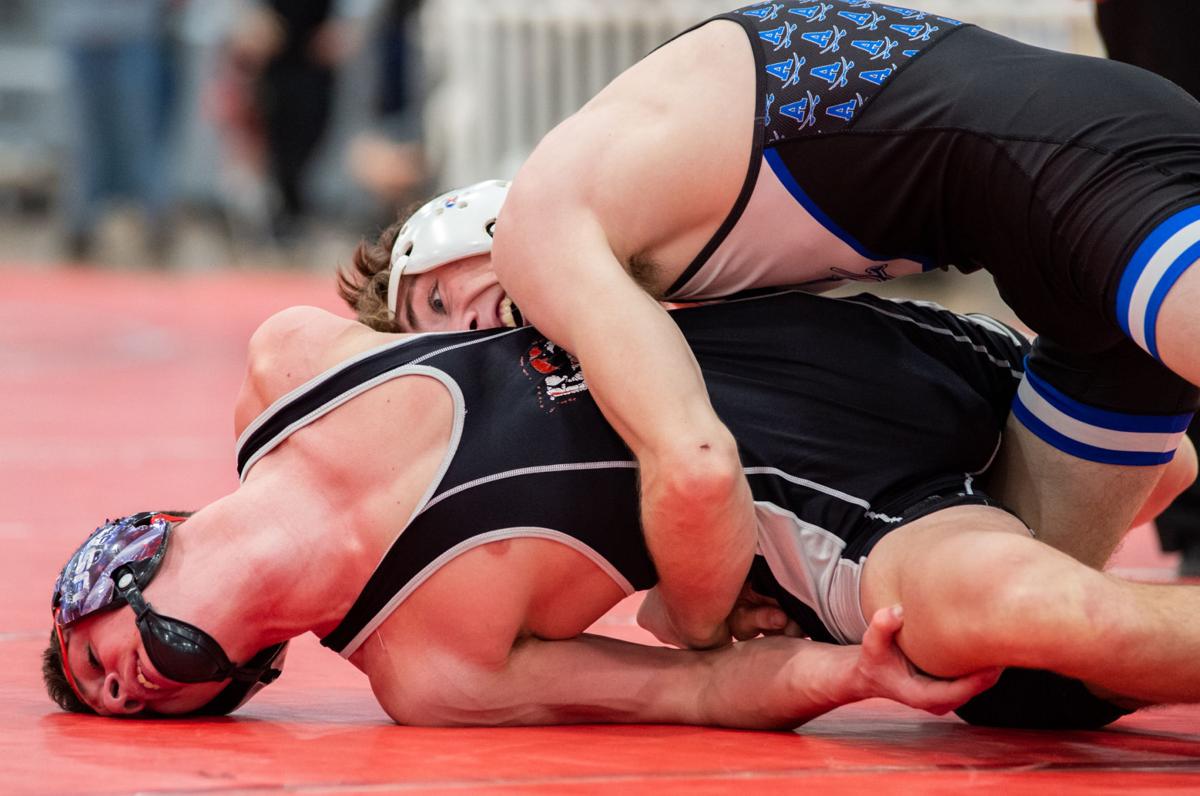 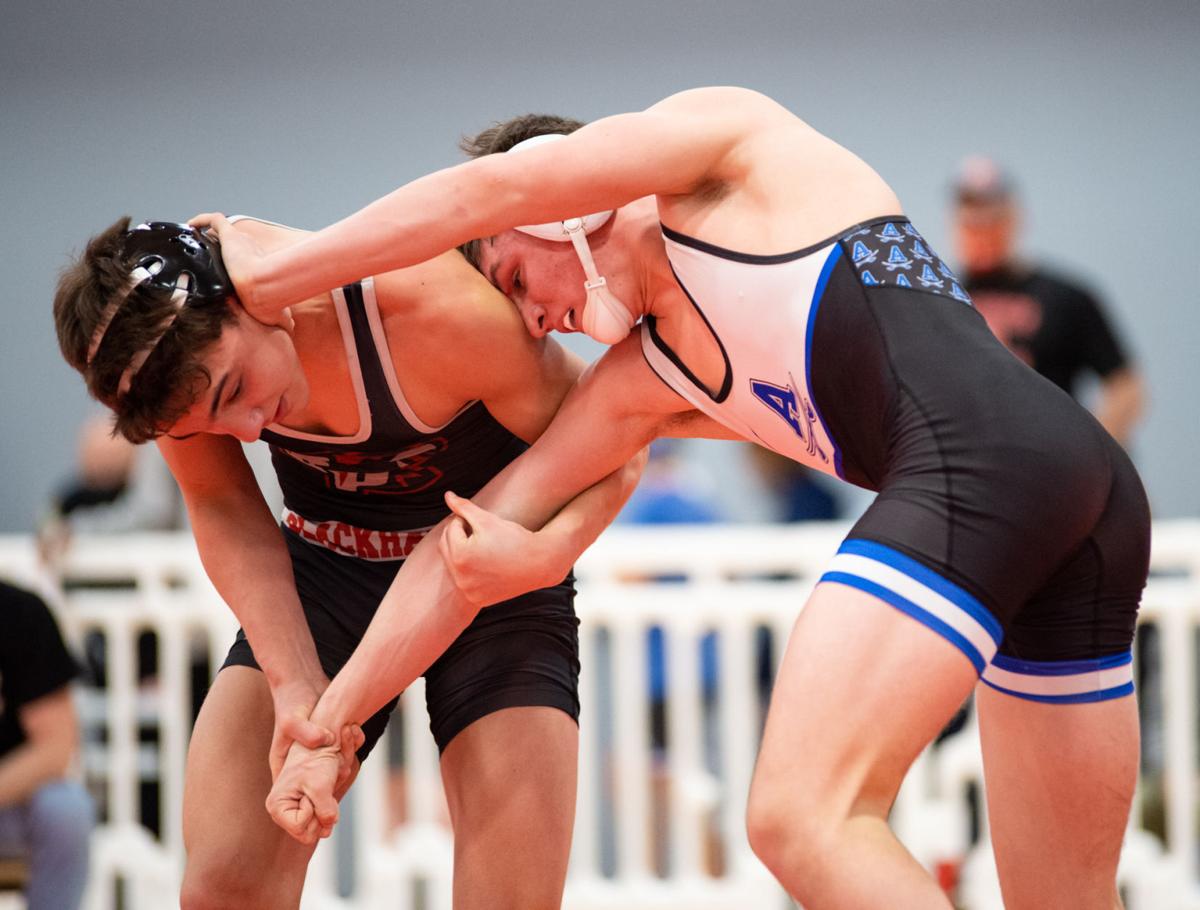 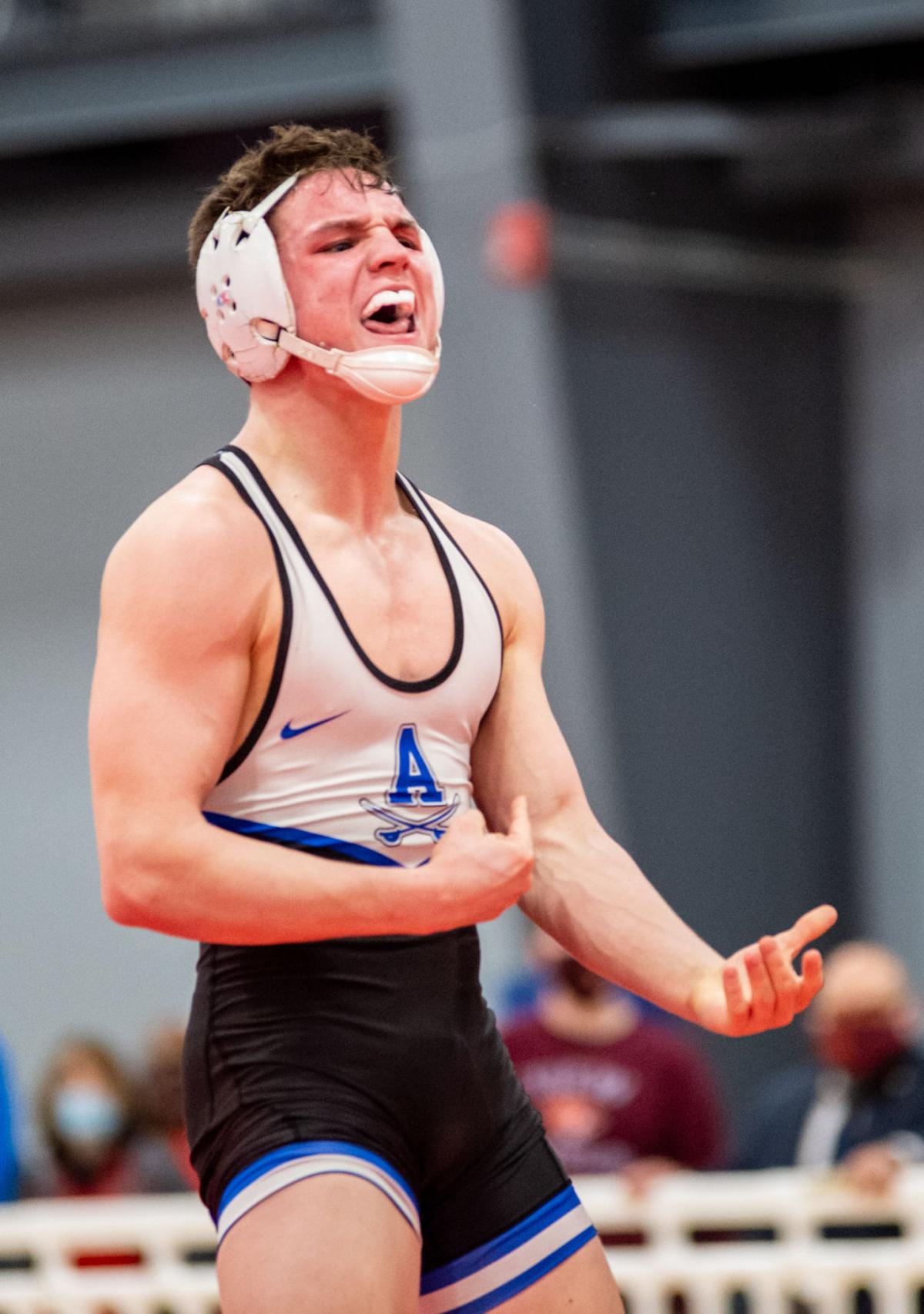 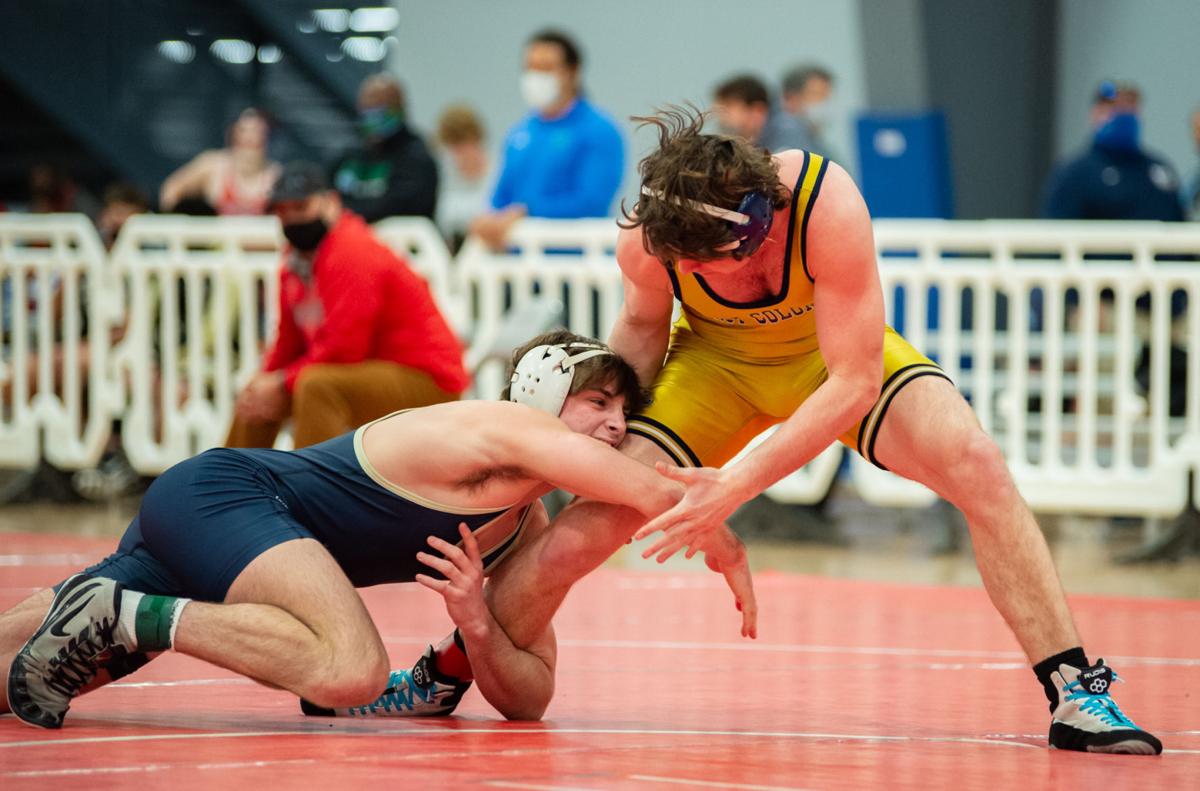 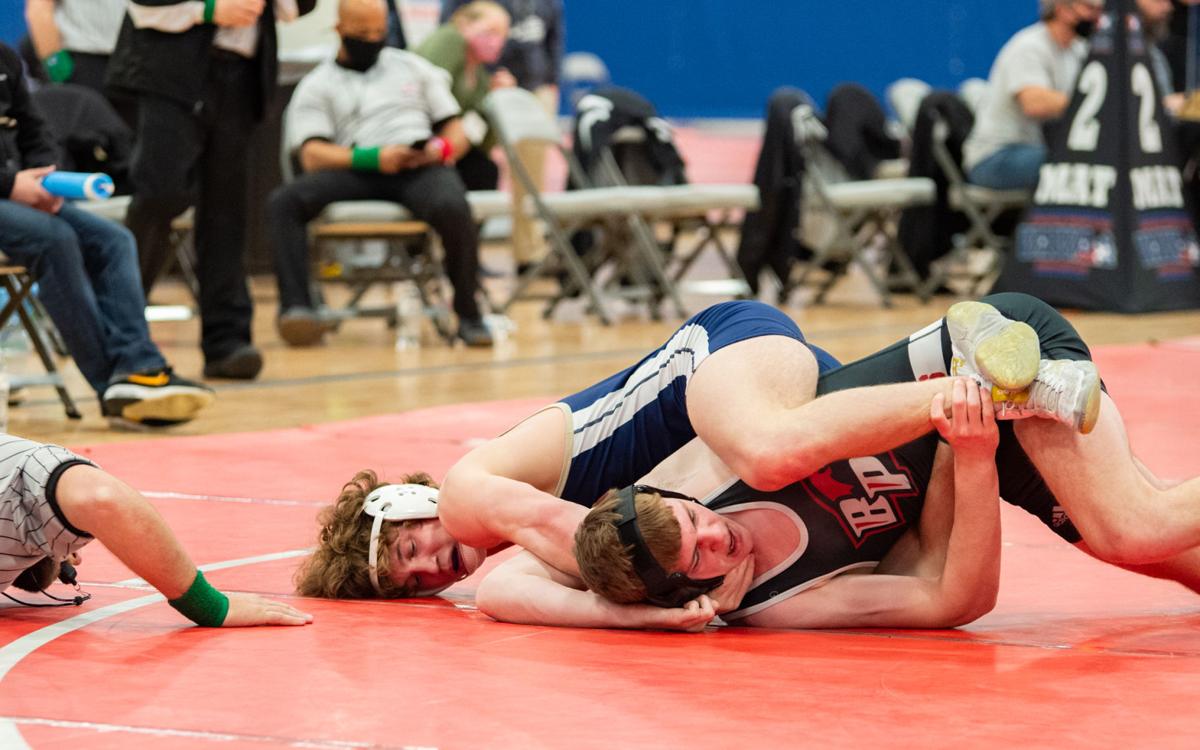 Ten wrestlers from Richmond-area schools took home individual state titles this past weekend across the Class 4, 5 and 6 state meets at the Virginia Beach Sports Center.

Schwartz is the team’s only senior, he moved from Alaska to Virginia at the end of his freshman year. Burks said he’s always had the talent and that raising his confidence levels was the key to leaving Midlothian a state champion.

Berry’s brother Knox finished second at 126 pounds, Burks said that tandem will be cornerstones of his burgeoning program. Gregory faced the toughest route to his championship, grinding through three close matches.

“It was a blue-collar day at work for these guys,” Burks said, adding that much of the group has wrestled together since they were 6 years old, coming up through the Midlothian minors program.

“They’ve been doing it for the last couple years and were finally able to finish on top. It was good that they were able to succeed and to do it together. It’s definitely a bright point for the program.”

Atlee’s Harris, a senior, and Frowert, a junior, are close friends who train together in the offseason. Harris said it was gratifying for them to see their labors come to fruition together.

“It was such a special moment for both Alex and I to be state champs,” said Harris, who missed two years because of injuries.

“This was one of the best moments of my life. Years of sitting on the sideline ... all lead up to this moment.”

“Falling short two years in a row, taking second, then second, and finally winning it — it means everything,” Dosado said.

After revamping his training regiment during the offseason, Halsey returned from a loss in last year’s 220-pound title match to claim an 11-2 major decision this time.

“The journey and getting here and winning it ... it felt good,” Halsey said. “Especially after taking the loss last year, it meant a lot.”

In Class 6, Cosby freshman Elijah Cramer (106 pounds, 20-0) finished an undefeated season with a 6-4 decision in the title match. Aggressive offense defines Cramer’s style. He used a Granby roll leading into a takedown with just 6 seconds left to score the winning points.

“I’m super happy, the kid was a good wrestler, I finished the match well,” Cramer said, adding that the title is more gratifying after a season filled with pandemic unknowns.

Cramer is the fourth state champion Cosby coach Mike Stefanko has had, and the first freshman. Stefanko said the sky’s the limit for his future.

“It’s super exciting for any of these kids that got to compete this year,” Stefanko said.

"And I know we all feel bad for those around the Richmond area and around the state that didn't get that opportunity. But it is very gratifying, we are so happy that we were able to get a season."

Hopewell gets another shot at boys state basketball title

High above one of the baskets at Hopewell High School, attached to the basket’s supports, is a banner that has become a little wavy with age.

Midlothian’s Crew Gregory celebrated his victory over First Colonial’s Nicholas Goenner in the 160-pound class in the VHSL Class 5 wrestling finals at the Virginia Beach sports center on Saturday.

Hanover’s Aden Halsey stands atop the podium as the 220-pound Class 4 state champion.