Second VCU-LSU hoops game won't be rescheduled; LSU says 'we wanted to play the game, but VCU did not'

The 2010s were a transformational decade for high school football in the Richmond area. Local teams claimed state championships at a rate never seen before.

In the 2000s, teams of the old Central Region won three state titles. Between 2010 and 2019, those squads claimed 11. Highland Springs won four in a row, preceded by L.C. Bird’s three consecutive.

It helped that the Virginia High School League revamped its system of alignment in 2013, spreading out local schools into five different classifications, giving them more chances to take home trophies.

But the transformation went beyond winning. Participation went down. But talent seemingly went up.

Because of the pandemic, there was no high school football season in 2020 and no All-Metro team. To fill the void, we picked an all-decade and player of the year.

Only high school accomplishments are taken into account, which is why some of the area’s most prominent collegiate and professional players are missing from this list. Only individuals who were named first-team All-Metro between 2010 and 2019 were eligible.

The team was voted by: Weldon Bradshaw, Gary Criswell, Gary Hess, Jonathan Howard, Eric Kolenich, Dave Lawrence and Arthur Utley. If two players tied in voting, both were named to the team.

Brendon Clark, Manchester, quarterback: Clark was one of the most polished and successful quarterbacks in Richmond-area history. In 2018, he led a Manchester team that tied the state record for points scored, won the Class 6 state title and went 15-0. A four-year starter, he is third in the Times-Dispatch record book with 9,215 career yards and second in total touchdowns with 119. He’s now on the roster at Notre Dame.

TreVeyon Henderson, Hopewell, running back: He had a spectacular junior season in 2019, scoring a Richmond-area record 53 touchdowns and leading Hopewell to the Class 3 state title and a 15-0 record. Named All-Metro as a sophomore, he was player of the year as a junior and missed his senior season because of the pandemic. He signed with Ohio State in the Class of 2021.

Yahkee Johnson, L.C. Bird, running back: One of the smallest, fiercest ball carriers in the area, Johnson rushed for 4,822 yards and 61 touchdowns in a little more than two varsity seasons. He was named All-Metro in 2010, player of the year in 2011, and he later played for Hampton.

Paul Robertson, L.C. Bird, running back: He didn't become a starter until his senior season in 2012, but he made the most of it, rushing for 2,935 yards, second most in one year in the local record book. He led L.C. Bird to the Group AAA, Division 6 state championship, the first of three state titles for the Skyhawks, and he was named All-Metro player of the year.

Greg Dortch, Highland Springs, wide receiver: Fast and elusive, Dortch was named All-Metro in 2014 and player of the year in 2015 when the Springers won their first of four state titles. He recorded the most receiving yards in the decade with 2,363. He played for Wake Forest and is now on the practice squad of the Atlanta Falcons.

Scott Bracey, Benedictine, wide receiver: Bracey was All-Metro three times, from 2013-2015 and was player of the year in 2014. During those three years, he produced 5,240 yards of offense as a receiver and quarterback. He played for Duke then transferred to James Madison.

Mekhi Becton, Highland Springs, offensive line: Becton was the size of an NFL lineman as a high school junior. He was named All-Metro in 2016 as the Springers won their second of four consecutive state titles. He went to Louisville and was drafted 11th overall by the New York Jets in 2020.

Suirad Ware, Highland Springs, offensive line: A two-way lineman, Ware was named All-Metro in 2018 when the Springers won the Class 5 state title and again in 2019. He went to East Carolina.

Will Pritchard, Manchester, offensive line: Pritchard was the top offensive lineman on the 2018 squad, when Manchester went 15-0 and won the Class 6 state championship. That team rushed for 3,500 yards and threw for almost 2,500. Pritchard went to Virginia Tech.

Augie Conte, Blessed Sacrament Huguenot, offensive line: Playing for one of the smallest schools in the area, Conte was a large, dominant blocker. He was a senior in 2011 when the Knights continually ran the ball behind him. He was a three-year starter at Virginia Tech.

Ethan Ratke, Atlee, kicker: Ratke was All-Metro in 2014 and 2015, and as a senior he kicked 50 of 52 extra points and 11 of 12 field goals. He excelled at kickoffs, routinely putting the ball in the end zone. He went to James Madison, when he set school records for field goals in a career and field goals in a season.

Sam Rogers, Hanover, utility: One of the decade’s fiercest power runners, Rogers was named All-Metro in 2011 and 2012, when he played quarterback, receiver and linebacker. As a senior, he rushed for 1,178 yards, threw for 1,006. He walked on at Virginia Tech, later earned a scholarship and was drafted into the NFL by the Los Angeles Rams. He is now Hanover’s coach.

Sulaiman Kamara, Hermitage, defensive line: Kamara was a three-year All-Metro pick from 2013-2015. He record 325 total tackles during those three years led a Hermitage defense that was one of the most stout in the area. He now plays for Wake Forest.

Hakeem Beamon, Manchester, defensive line: Beamon was a disruptive defensive end in 2018, when he made 16 tackles for loss and helped lead Manchester to the Class 6 state title and a 15-0 record. He plays for Penn State now.

Keyon Williams, Hopewell, defensive line: Williams was part of an imposing defensive line in 2019 when Hopewell won the Class 3 state championship and went 15-0. He recorded 94 tackles, 37 tackles for loss and 11.5 sacks that season.

Corey Marshall, Dinwiddie, defensive line: Marshall was a two-year All-Metro pick in 2009 and 2010. As a senior, he was the Generals’ leading tackler with 122 total tackles. He went to Virginia Tech.

Curtis Grant, Hermitage, linebacker: Tall, fast and capable of eating offensive players, Grant was a three-year All-Metro selection from 2008-2010. He recorded 134 total tackles as a senior and went to Ohio State, where he won a national championship. He played for the New York Giants in 2017.

Rayshard Ashby, L.C. Bird, linebacker: Ashby, one of the decade’s most intuitive players, was named All-Metro from 2014-2016. A four-year starter, he recorded 100-plus tackles in all four seasons and won two state championships. He played for Virginia Tech and recently declared for the NFL draft.

K’Vaughan Pope, Dinwiddie, linebacker: Pope started as a wide receiver but matured into a linebacker, becoming one of the most imposing players on the field. He was All-Metro in 2016 when he recorded six interceptions and 2017 when he made 65 tackles and 39 assists. He plays for Ohio State.

Anthony Harris, L.C. Bird, defensive back: Harris was named All-Metro in 2009 and 2010 as a quarterback and defensive back. He never stopped improving. He went to Virginia and though he wasn’t taken in the NFL draft, he is now the starting free safety for the Minnesota Vikings.

Tremayne Talbert, Highland Springs, defensive back: Talbert was All-Metro in 2017 and 2018 and intercepted nine passes in his career. He was a dangerous return man, and he played wide receiver, leading Highland Springs to state titles in each of his two varsity seasons.

K’Von Wallace, Highland Springs, defensive back: Wallace’s chance didn’t come until his senior year in 2015, but he made the most of his opportunity, playing cornerback, producing 1,094 yards of offense, winning a state title and attracting an offer from Clemson. Wallace now plays for the Philadelphia Eagles.

Malcolm Greene, Highland Springs, defensive back: Quarterbacks rarely threw in Greene’s vicinity. He recorded nine tackles for loss as a senior, his second straight year named All-Metro. The Springers won the Class 5 state title during his junior year. He now plays for Clemson.

Thomas Meadows, Goochland, punter: Meadows was named All-Metro in 2010 when he averaged 37 yards per punt and 2011 when he averaged 41 yards. Goochland went to the state title game his senior year, and he played for Purdue on scholarship.

Greg Cuffey, Hopewell, utility: Cuffey was named player of the year in 2017 at utility when he led Hopewell to the Class 3 state championship. He threw for 2,020 yards, rushed for 572 and recorded three interceptions on defense. He now plays for William & Mary.

Player of the decade

Brendon Clark, Manchester: As a senior, Clark had as good a year as any quarterback could hope to have. He threw for 2,327 yards, 35 touchdowns and just one interception. He rushed for 774 yards and scored 17 more touchdowns. His team won the state championship and went 15-0. It was the culmination of a four-year career in which he passed for 7,148 yards and accounted for 119 touchdowns.

The more his young children grew and became “these cool people I want to spend time with,” the more Trinity Episcopal boys basketball coach Ri…

St. Catherine’s soccer (11-0) has allowed just one goal all season ahead of the Saints’ LIS final matchup with Collegiate (12-2) on Thursday.

High school results for May 15

The Virginia Independent Schools Athletic Association's state tournaments are about to get underway. 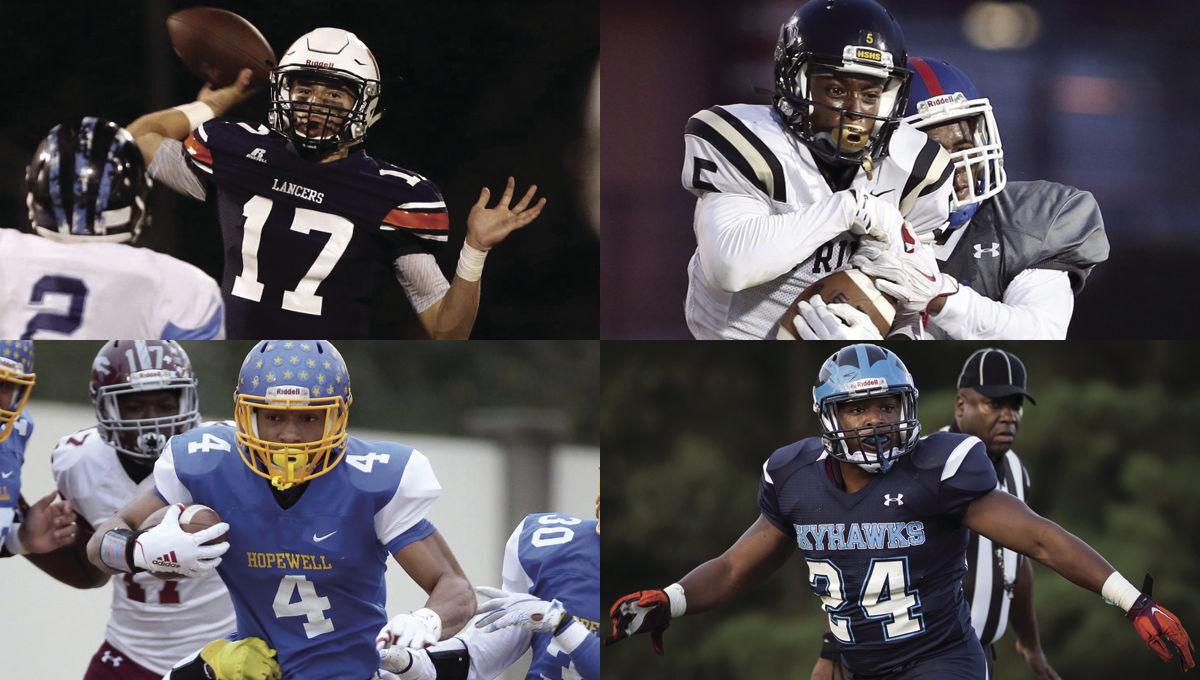 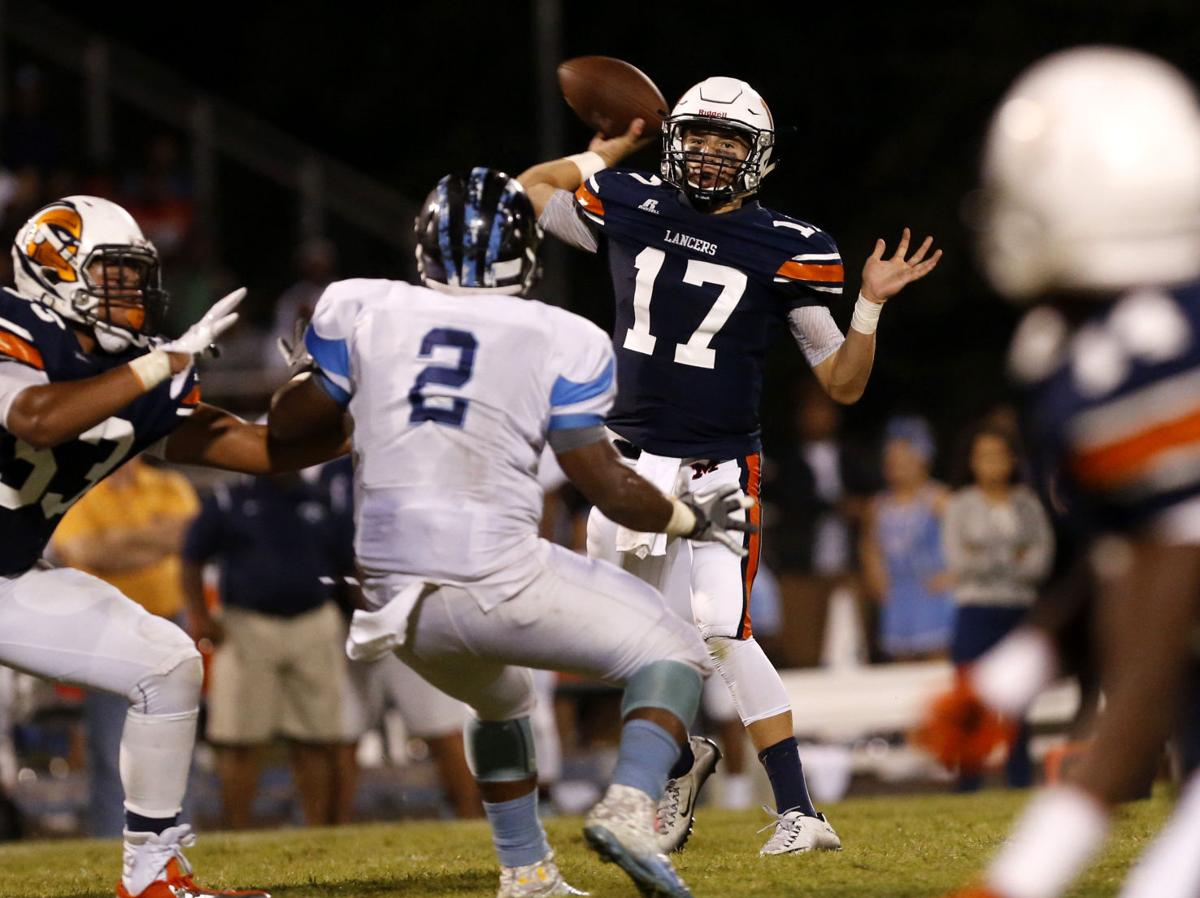 Manchester QB Brendon Clark, pictured during his freshman season in 2015, finished his career with 7,148 passing yards, sixth most in the Times-Dispatch record book. He did so despite missing a big chunk of his freshman year with an injury. 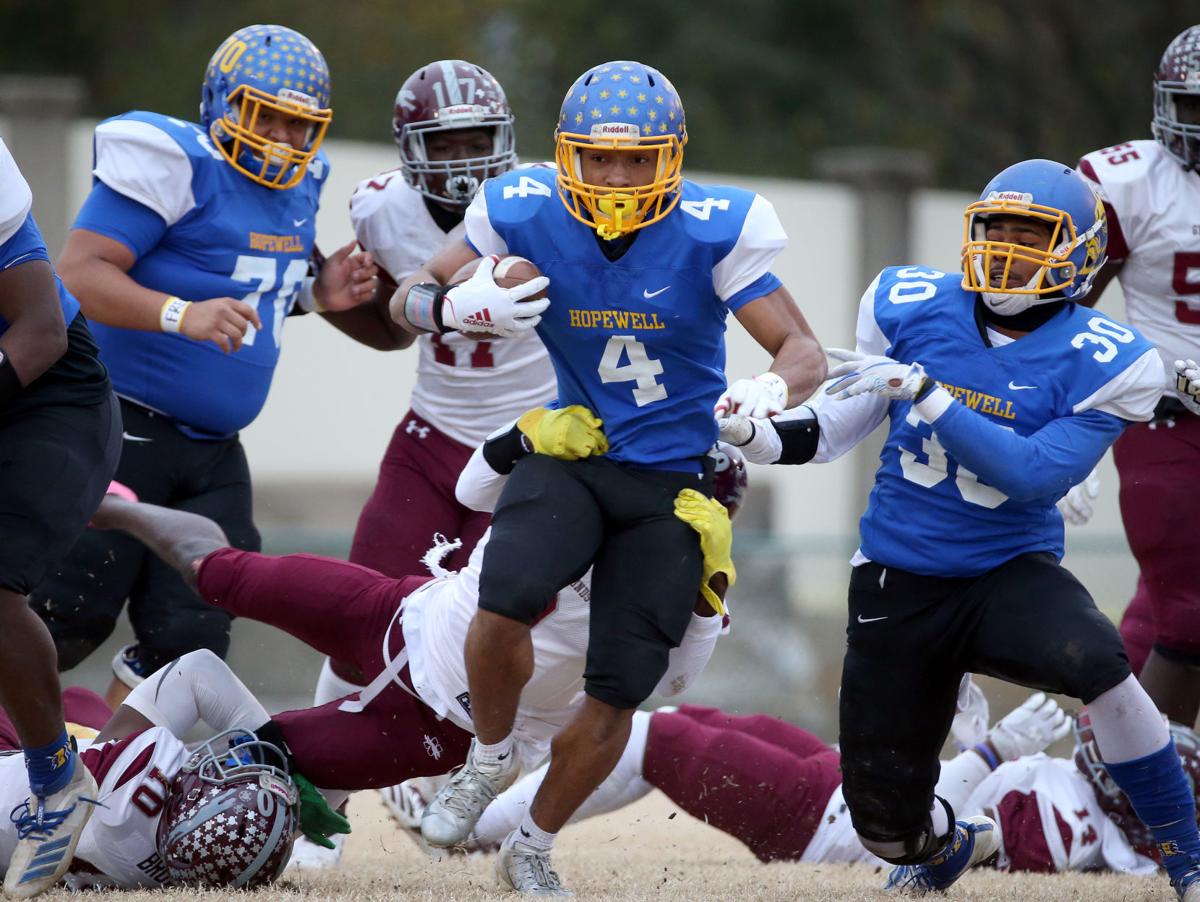 Hopewell’s TreVeyon Henderson(4) runs the ball against I.C. Norcom in a 2019 playoff game. Henderson has signed with Ohio State. 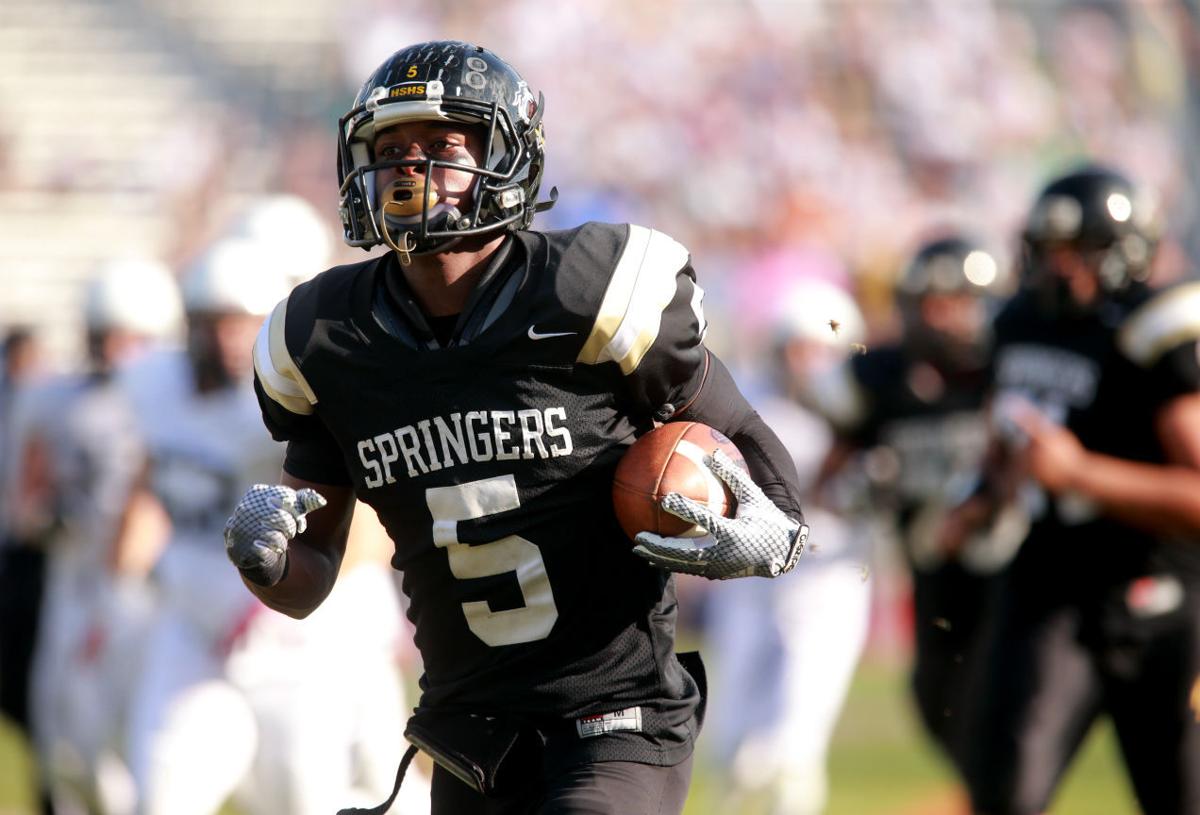 K’Von Wallace had few scholarship offers when his senior season began at Highland Springs. Clemson offered after his senior season, and four years later, he was drafted by the Philadelphia Eagles. 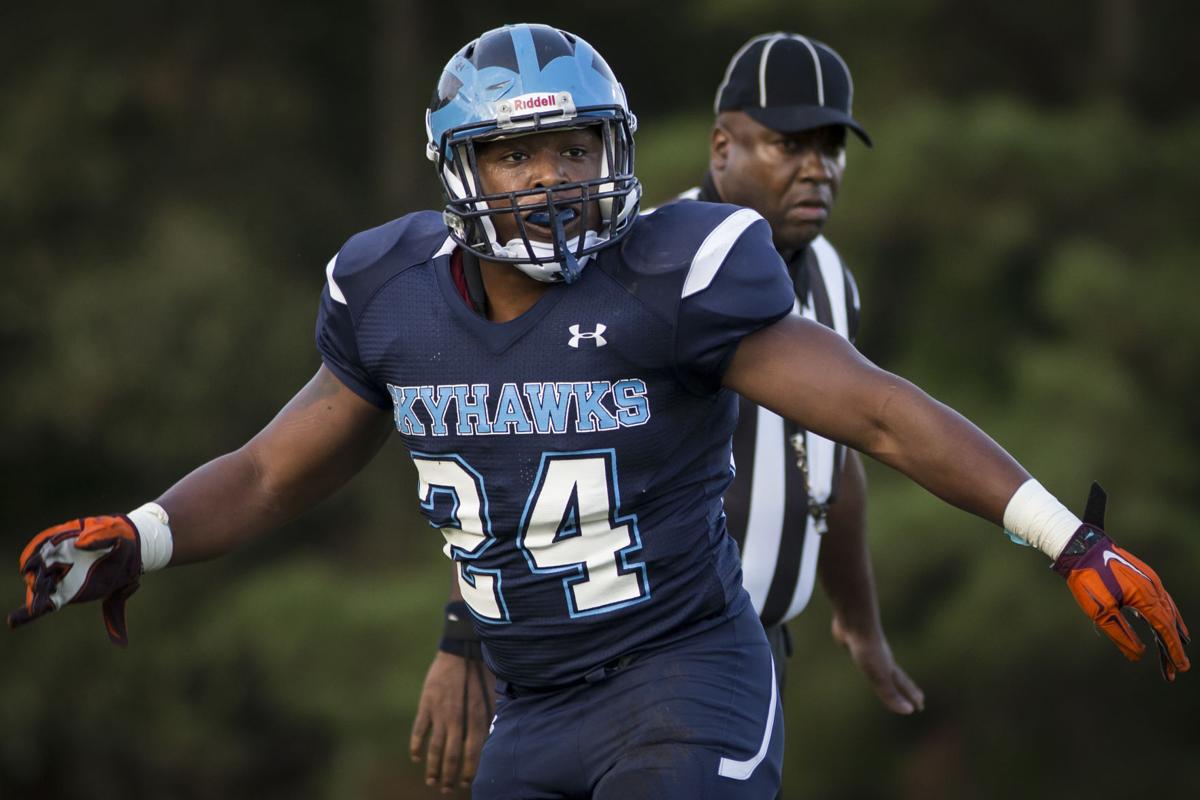 Rayshard Ashby was a four-year starter for L.C. Bird and was named All-Metro from 2014-2016. He went to Virginia Tech and recently declared for the NFL draft. 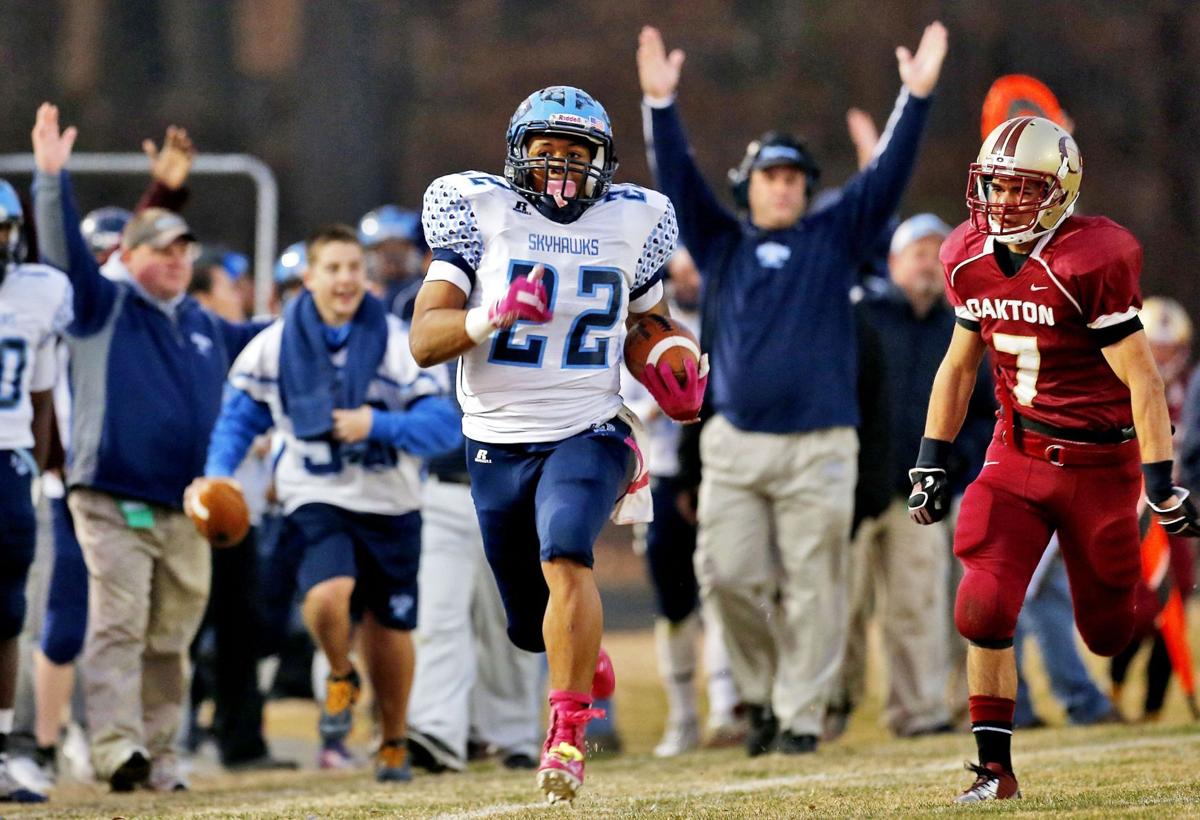 L.C. Bird’s Paul Robertson ran for 426 yards in the 2012 Division 6 semifinals against Oakton. Robertson finished the year with 2,935 rushing yards, second most in the Times-Dispatch record book. 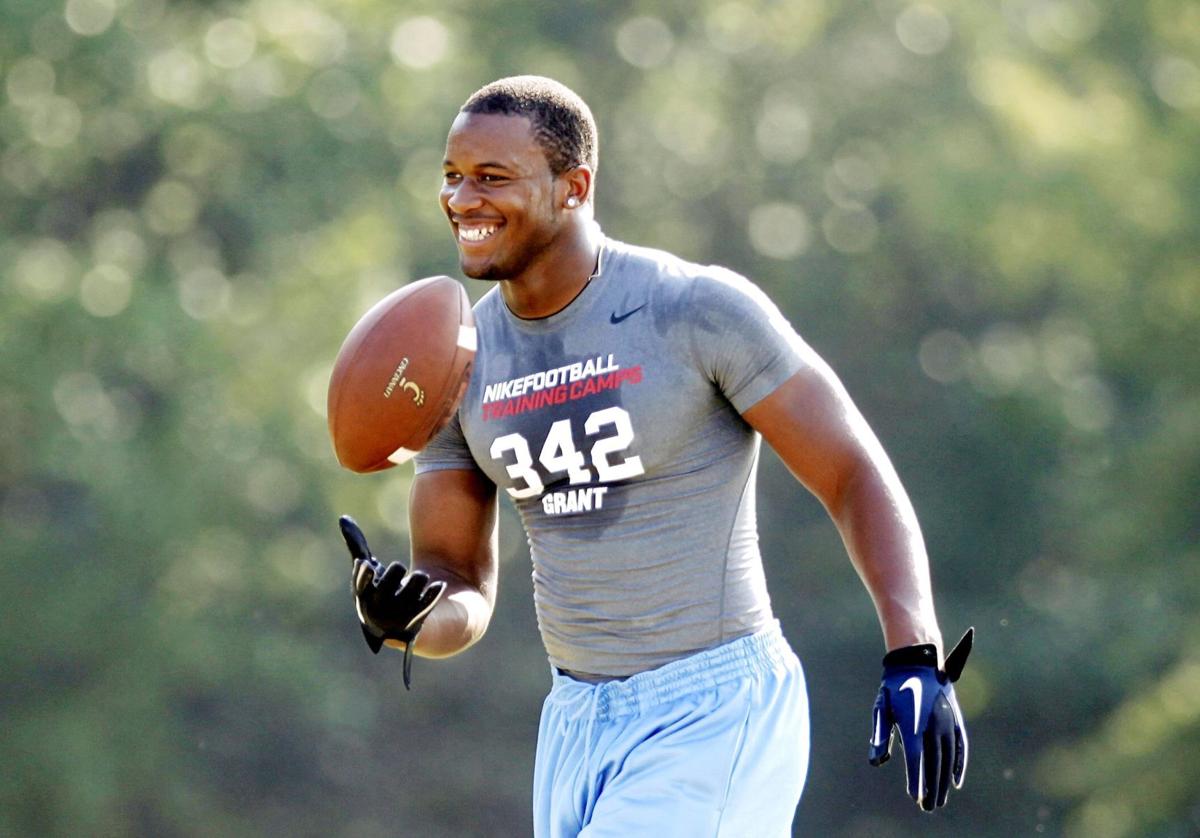 Hermitage linebacker Curtis Grant, pictured in Aug. 2010, went on to win a national championship with Ohio State. He played with the New York Giants in 2017. 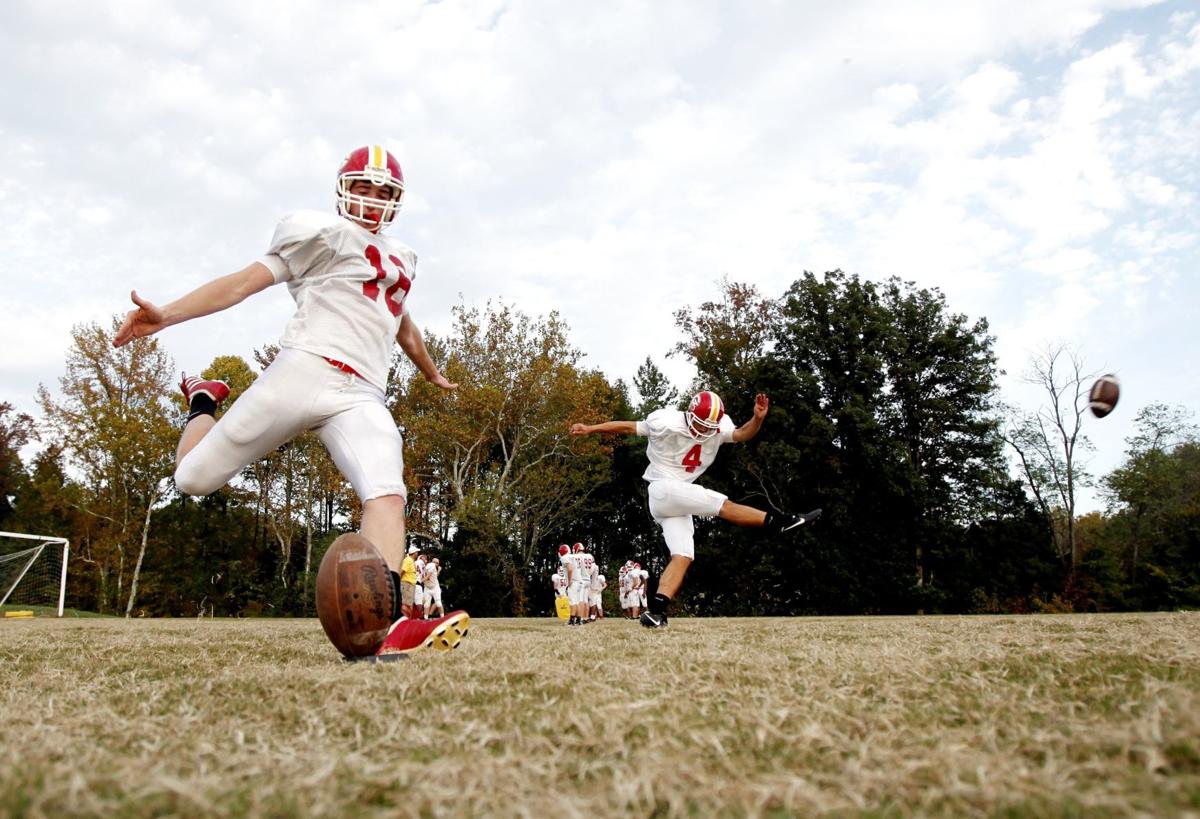 Division I kickers are rare in high school football. But in 2011, Goochland had two of them, Colby Cooke (left) and Thomas Meadows. Both made the all-decade team.

Dinwiddie's Sadarius Williams scores a touchdown against Sherando during the Group 4A football championship game at Williams Stadium in Lynchburg. Dinwiddie won 56-14 to finish the year undefeated. 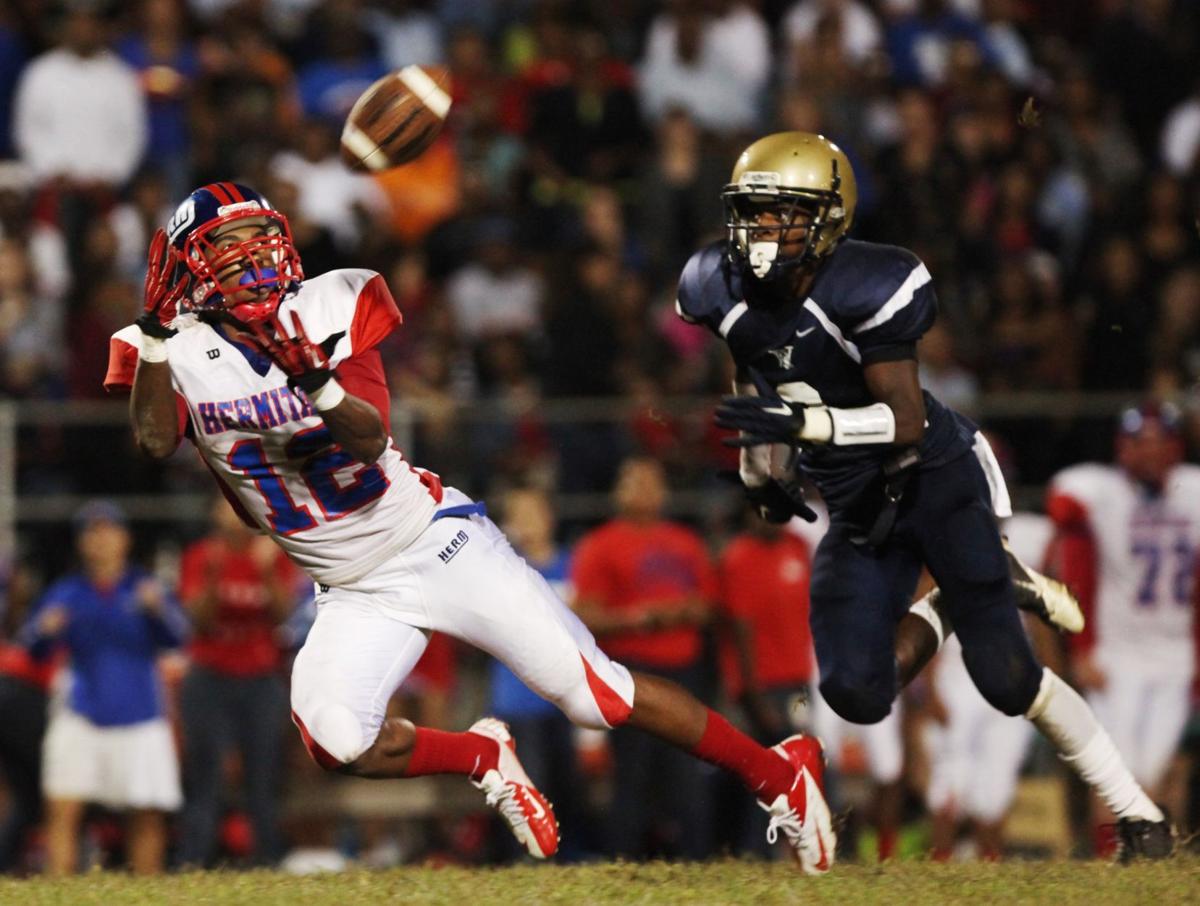 Hermitage's Brian Brown, pictured in 2012, went to the University of Richmond and played briefly for the Dallas Cowboys. 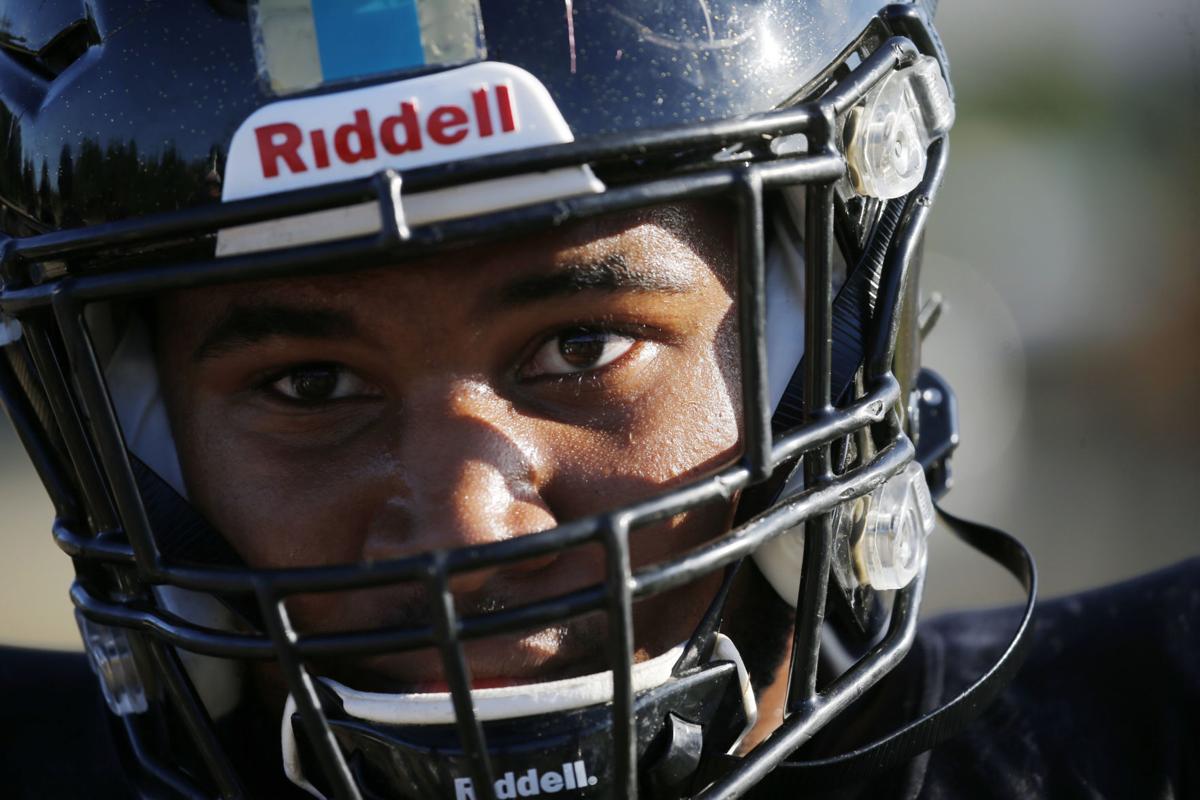 Devin Flowers of Glen Allen set the local career rushing record with 5,532 yards. He broke a record set by Macho Harris that stood for 15 years. 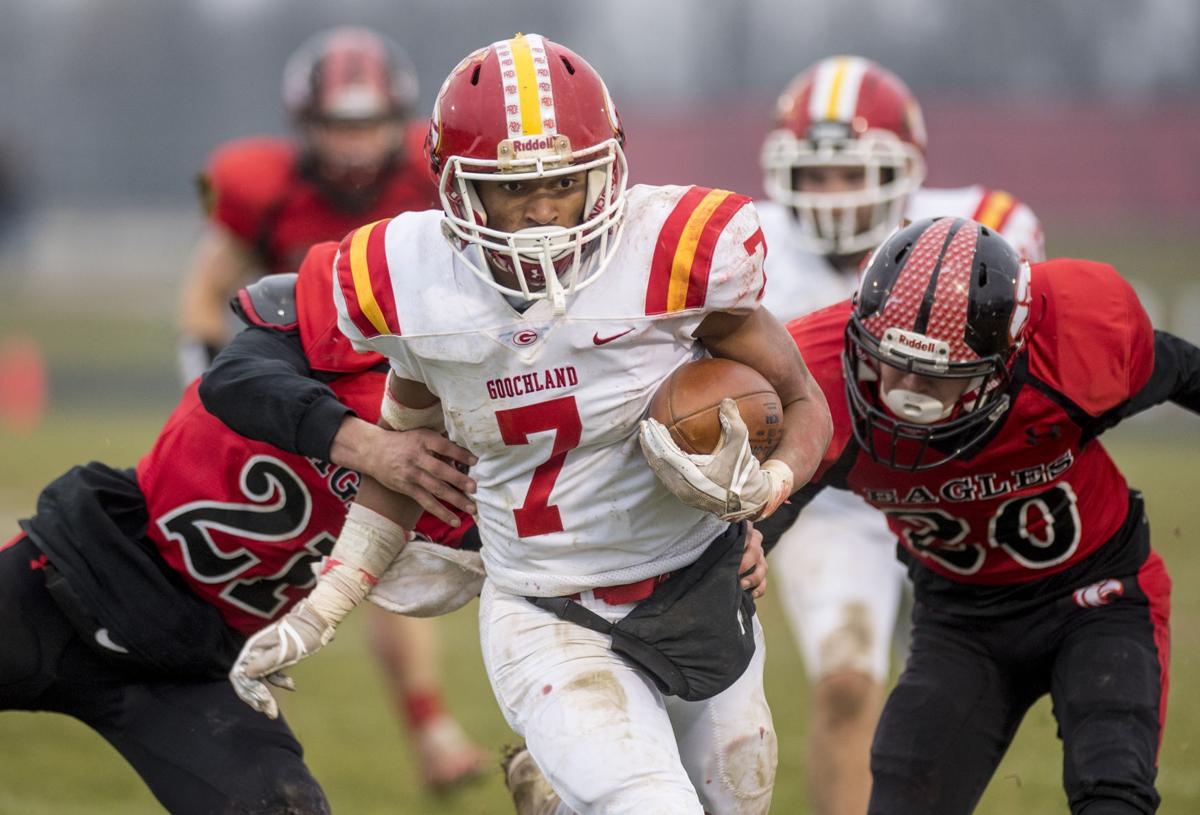