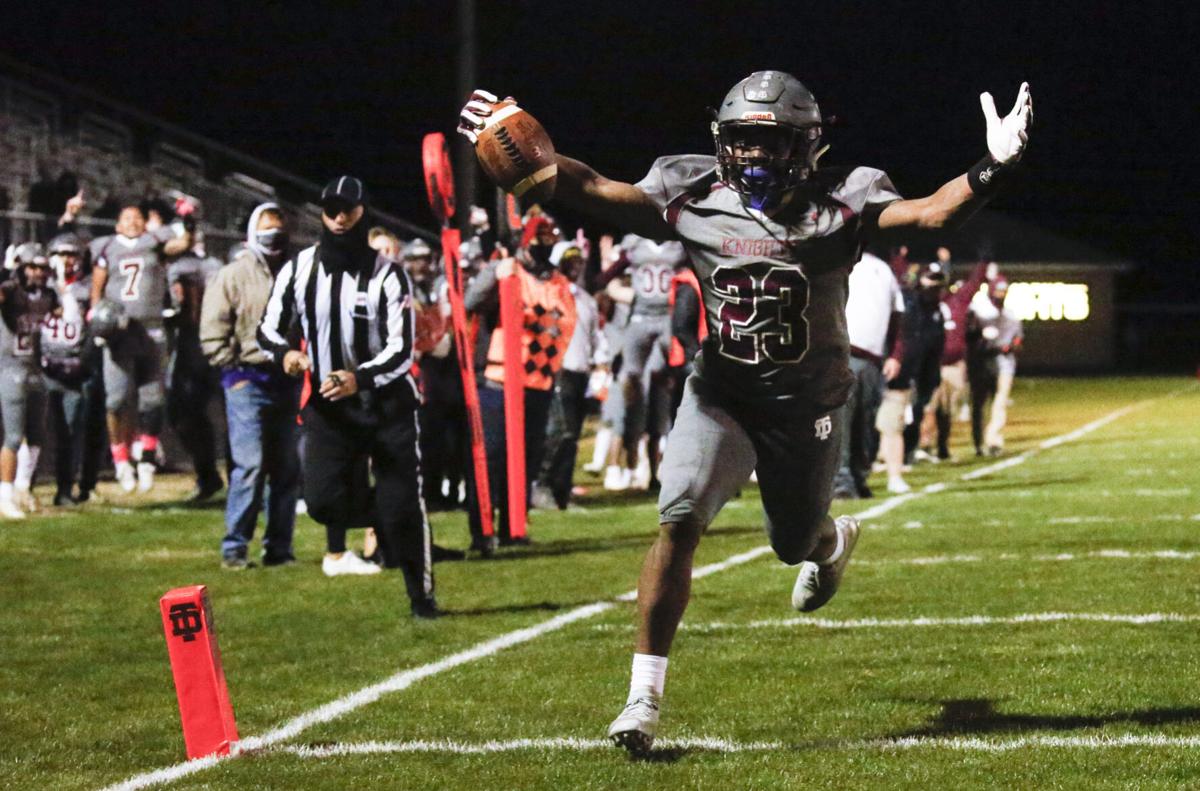 Thomas Dale’s Brandon Rose began to celebrate as he crossed the goal line for a touchdown against Dinwiddie on Thursday night. Rose’s rushing score punctuated a 14-point comeback for the Knights, giving them a 19-14 lead and the eventual win over the Generals. 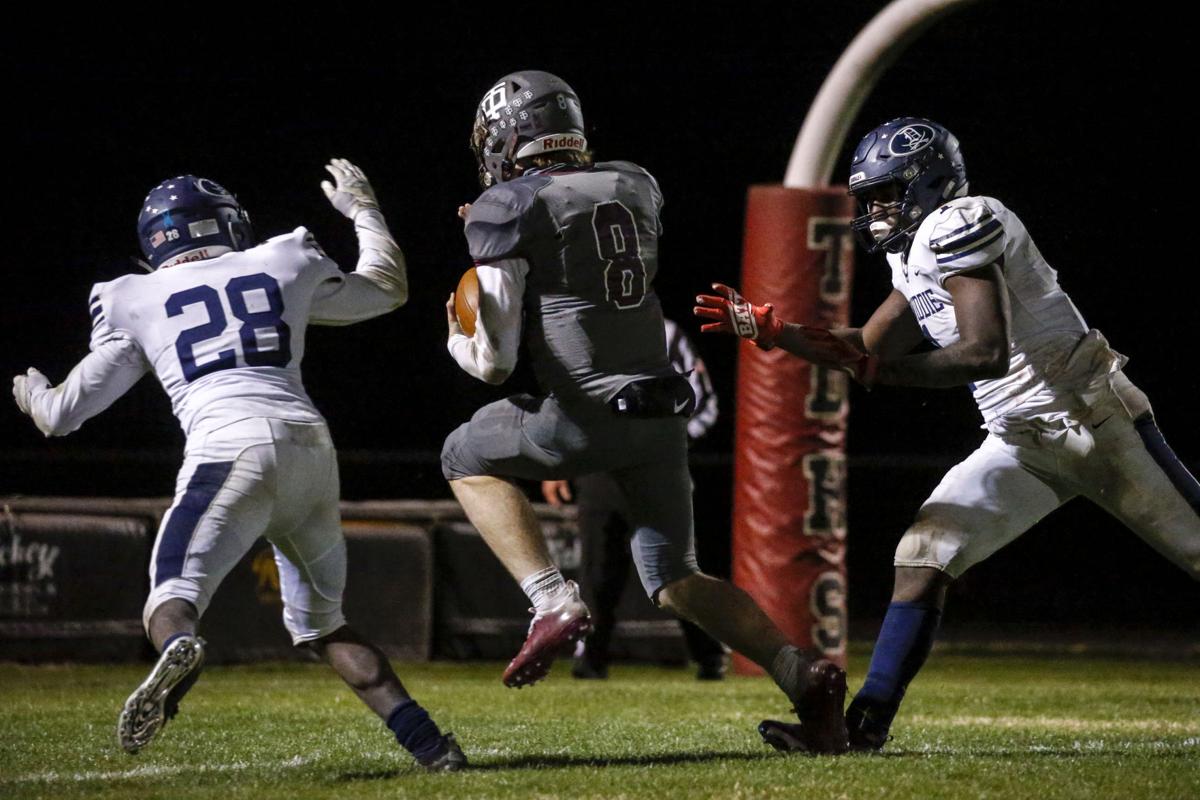 Thomas Dale quarterback Ethan Minter (8) scampered into the end zone for the Knights’ first touchdown on Thursday. He left later in the game because of an injury. 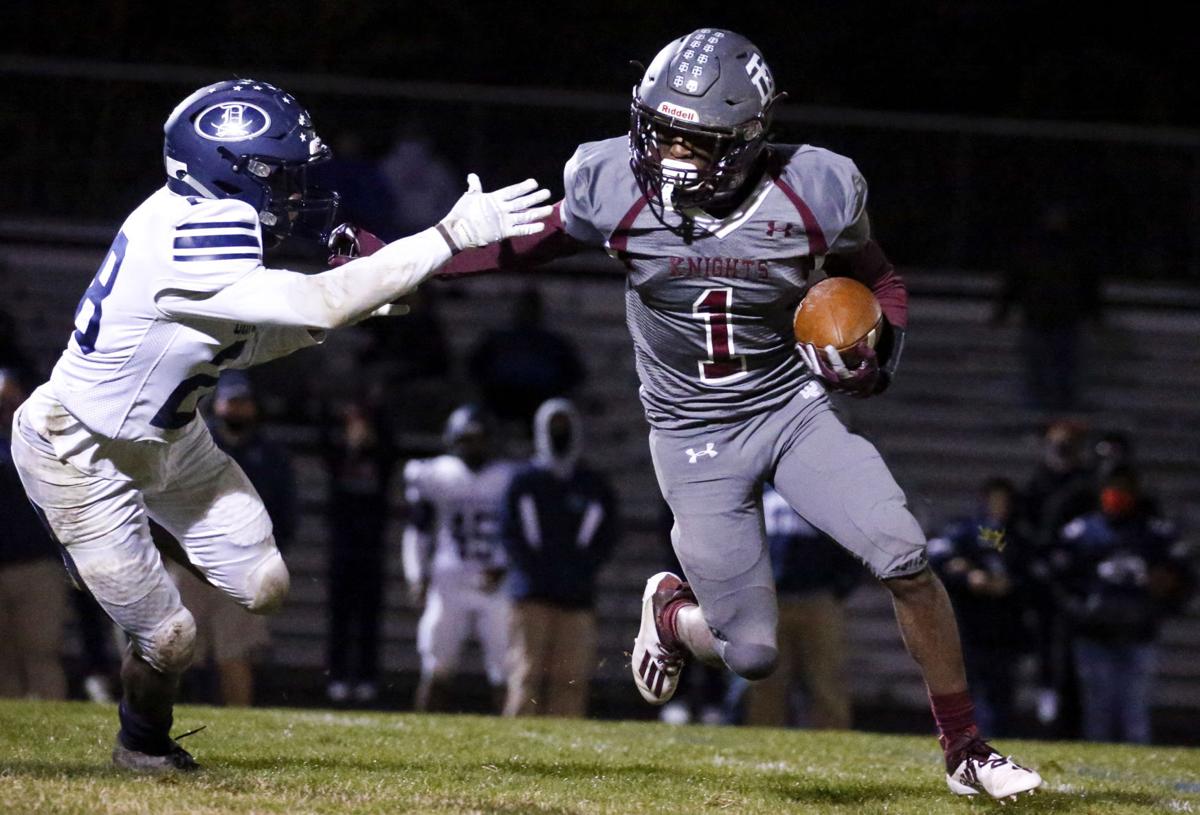 With the win, the Knights finished their regular season undefeated (5-0) and set themselves up to host a Class 6, Region A playoff game next week.

“The grittiness in this team and the defense really made a difference tonight,” said Thomas Dale head coach Kevin Tucker. “They’ve got a never-quit, never-die attitude. I couldn’t be more proud of this group. … We had guys go down, but guys were stepping up left and right.”

The Generals (4-2) put up an early 14-0 lead by capitalizing on a pair of interceptions by senior Cedric Drumgoole, who also added 91 receiving yards. Junior quarterback Brenton Hilton ran for both of Dinwiddie’s scores.

Tucker said that his team was forcing the ball too much in the first half and that it had thrown off the team’s tempo to start the game.

“The quarterbacks are young, and they were trying to force some balls in there that they shouldn’t have,” Tucker said. “At halftime, we talked to them, calmed them down, and then we started doing what Thomas Dale does.”

And what Thomas Dale football does is run the ball.

With its offense grounded, Tucker said his team was better able to control the clock and keep its defense fresh.

After the first interception in their favor, sophomore running back Brandon Rose — filling in for injured starter Jordan Branch — carried the ball close to the Generals’ end zone, where freshman quarterback Ethan Minter finished the drive for the first Thomas Dale score.

Then the Knights got the ball back right back for a chance to even up the score.

“When we had that turnover on the kickoff return after we scored, that changed the momentum of the game for us. That put us in a great position to take back control,” Tucker said.

A hard tackle sent Minter to the sideline, and junior quarterback Ethan Hamill was called upon to take his place in the pocket.

Despite the team’s earlier troubles getting passes past the Dinwiddie defense, Hamill was able to connect with DeAngelo Gray to bring the score up to 14-12, with the Generals still leading after a failed 2-point conversion.

Thomas Dale would get another chance to claim the lead after senior defensive lineman Jonathan Martinez picked off another pass.

“It felt crazy,” Martinez said on the interception. “After I got the pick, it just picked up the whole team and we kept on rolling.”

This time, Rose made it all the way to the end zone, and after a successful extra point, the Knights seized a 19-14 lead.

There were still more than eight minutes left on the clock, but the Thomas Dale defense held fast. Dale’s Jamar Johnson intercepted another pass — the third for the Knights and seventh in the game overall — and Hamill ended the game with a knee.

With the playoffs looming, Tucker said that he liked the grit, depth and improvements each week that his team has shown in the shortened regular season, but there were still some mistakes and unnecessary penalties that needed to be ironed out of their play.

And, while the team’s unblemished record was proof of their hard work, Martinez said that his team still has eyes on what lies ahead.

“We feel good. Really, we just have to keep preparing for the next one. Winning in the regular season doesn’t matter as much, it’s the playoffs that really matter,” Martinez said.

She is the longest tenured varsity volleyball coach, boys or girls, in VHSL history.

Thomas Dale’s Brandon Rose began to celebrate as he crossed the goal line for a touchdown against Dinwiddie on Thursday night. Rose’s rushing score punctuated a 14-point comeback for the Knights, giving them a 19-14 lead and the eventual win over the Generals.

Thomas Dale quarterback Ethan Minter (8) scampered into the end zone for the Knights’ first touchdown on Thursday. He left later in the game because of an injury.