How the Flying Squirrels ‘Richmond 34 Legacy Weekend’ came together, and what it means for the future
0 Comments
Share this
1 of 3 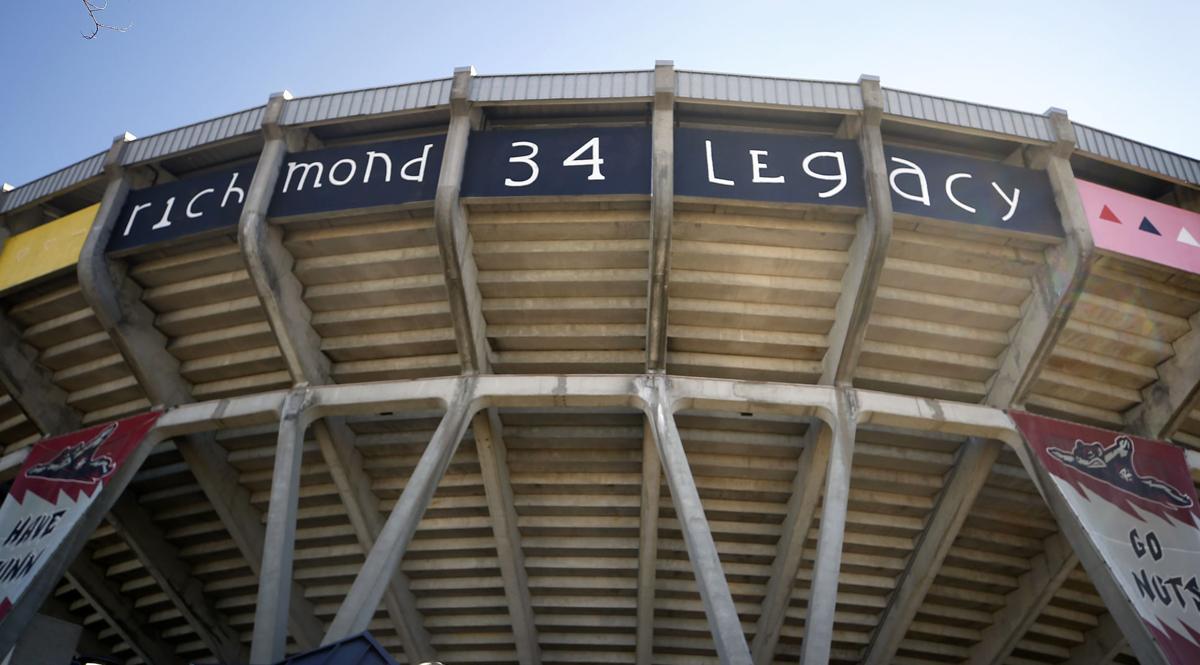 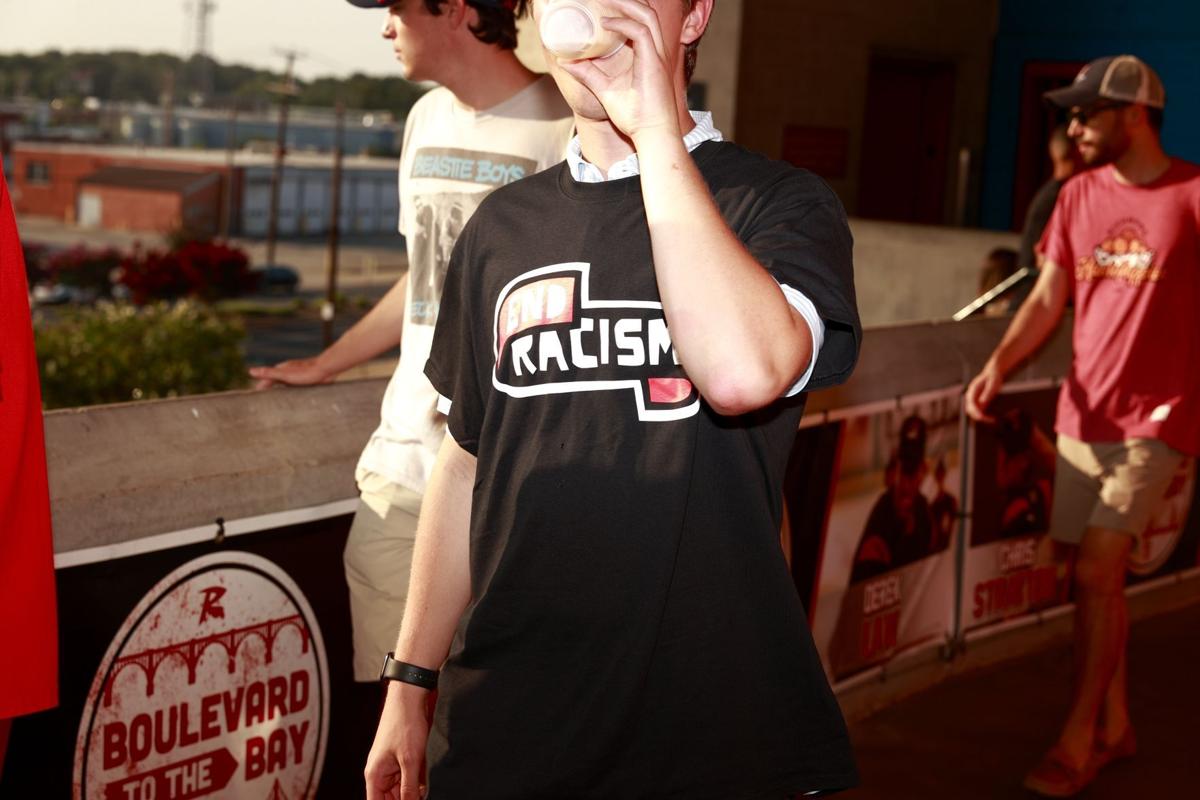 A fan wore one of the 1,000 “End Racism” T-shirts designed by Marc Cheatham that the Flying Squirrels distributed to fans at The Diamond on Friday night. 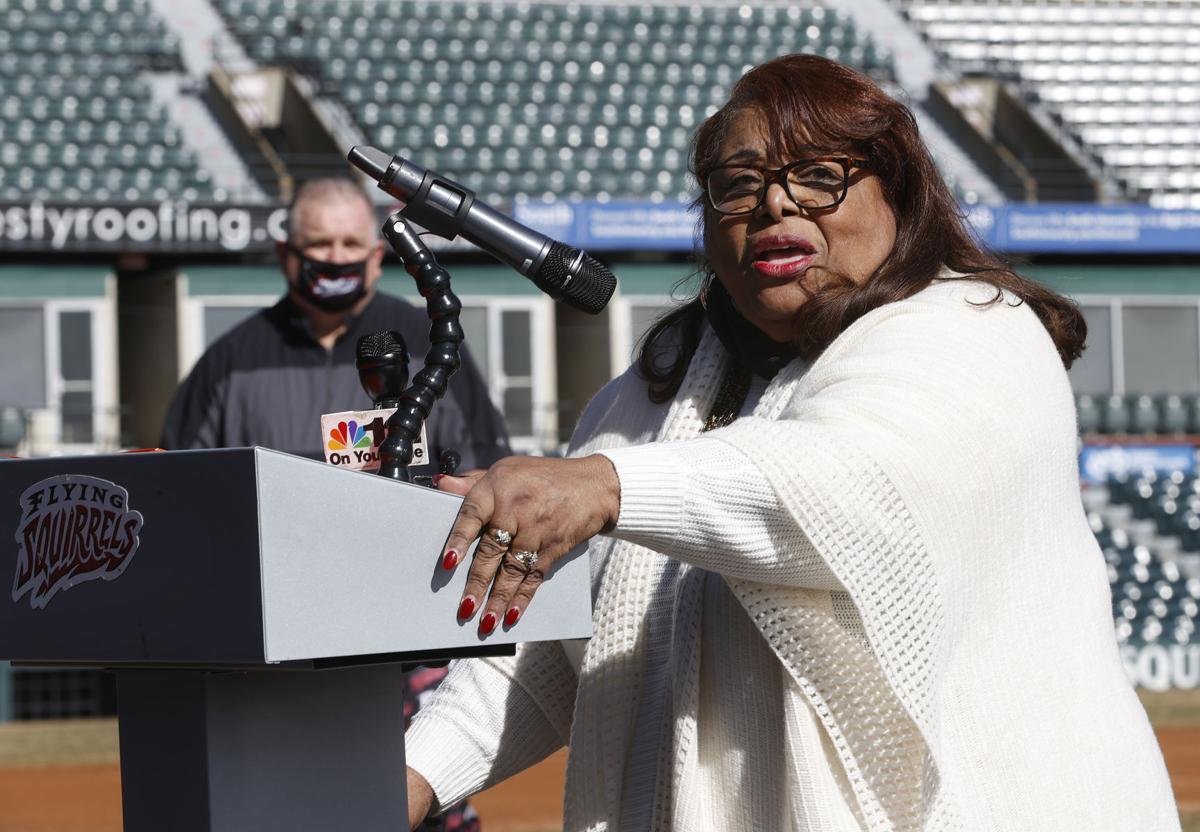 Elizabeth Johnson Rice, one of the Richmond 34, speaks during a ceremony at the Diamond Wednesday, Feb. 24, 2021, as the Flying Squirrels retire the #34 to honor the Richmond 34. Rice was one of 34 VUU students who held a peaceful sit-in protest at the whites-only lunch counter of Thalhimers Department Store in downtown Richmond in 1960.

In the aftermath of George Floyd’s murder, Andre Shank wondered if the Flying Squirrels would be interested in painting a social justice message on The Diamond. The Richmond-based painter and sculptor previously did the original mural that wraps around the stadium, and he thought an addition — like the painting the message “Black Lives Matter” — would show solidarity.

The stadium was the perfect place because with Interstate 95 running adjacent, its visibility across the city, and the Greyhound bus station across the street, The Diamond is almost like “a welcome map to Richmond.”

But when Shank talked with Flying Squirrels CEO Todd “Parney” Parnell and owner Lou DiBella, the latter had a different idea: Make the message “uniquely Richmond” by honoring local activists.

For Richmond, that came in the form of the Richmond 34, a group of Black Virginia Union University students who were arrested in 1960 after a peaceful sit-in protest against white-only lunch counters. The group played a significant role in the Civil Rights Act of 1964.

“What an honor,” Elizabeth Johnson Rice, a member of the Richmond 34, said of the mural. “Because when people come into the city, they see The Diamond and they look up and they see ‘Richmond 34 Legacy,’ and they will ask the question: Well, who are the Richmond 34?”

The 34 went largely unrecognized in the years after the sit-in. But now, what started with a conversation about painting a message on The Diamond evolved into a plethora of initiatives by the Flying Squirrels to honor the local activists. It’s stretched beyond that, too. The organization brought Johnson Rice in to serve as a “community ambassador” and has several other plans, including educating the community about the group and reassessing its internal diversity. This Friday and Saturday, the team held its “Richmond 34 Legacy Weekend.” But the team has more aspirations toward its overall mission: working to eradicate racism.

“We have a platform and we can stand up for what's right — and this is what's right,” Parnell said.

It was near Johnson Rice’s 80th birthday during October 2020 when she was first contacted by the Flying Squirrels. They gave her a custom-made No. 80 Flying Squirrels jersey with her name on it, and Parnell asked her if she’d be willing to share her story from the Richmond 34 with the organization.

Johnson Rice agreed, and when she spoke in The Diamond’s conference room, the group was so touched that she said she saw tears. Shank heard the story via Zoom and called it one of the most powerful experiences ever. It was so quiet you could hear a pin drop for about an hour, he added.

Johnson Rice’s friendship with Parnell and other members of the front office soon blossomed, and she said the team offered her an expanded platform to “create goodwill.” It allowed her to talk about her experience with the Richmond 34, which paralleled racism issues that are still present nationwide.

“Where else in the United States is there a Black woman working with a minor league baseball team to talk about eradicating racism?” I daresay, there's probably nowhere else,” Johnson Rice said.

Working alongside the Flying Squirrels mascots Nutzy and Natasha, Johnson Rice has been talking to elementary school students at Richmond Public Schools to educate them about the Richmond 34 and its connection to today’s issues. Recently, that’s been virtual, but it could shift to in-person this fall, she said. They also want to try a “joint venture” with an open discussion among parents, students and administrators regarding racial issues.

The work Johnson Rice is doing with the team is “bigger than we are,” she said.

“It's just so important to tell that story so people know that it actually is taking place in their backyard as well,” said Marc Cheatham, who helped design the “End Racism” T-shirts the team distributed to fans.

In October or November 2020, Cheatham wrote a “cold-call” letter to the Flying Squirrels about the potential for apparel with a social justice message. Cheatham, who works for the blog “The Cheats Movement” and a huge Squirrels fan, saw the local team as an opportunity to further unite the community. He didn’t know about the Richmond 34 Legacy initiative that was just getting underway, but saw an opportunity. After all, without a 2020 season, the organization had plenty of time to reflect on the best way to share a message about inclusivity, Cheatham said.

The Flying Squirrels agreed, and working alongside Noah Scalin, a Richmond-based artist, Cheatham helped design the T-shirts that were distributed to 1,000 fans on Friday.

It was important for the message to specifically use the word “racism,” Cheatham said, because they wanted something more direct than words like “equality” or “together.”

“It's very important for people to know that the moral and the principle of the Squirrels and this community is one that, all racism will not be tolerated,” Cheatham said.

For Shank, getting to paint The Diamond — a building he considered somewhat of a “Richmond monument” — was one of his proudest projects. Shank, who is white, wanted to have other Black muralists work alongside him, but the schedules of those he asked ultimately didn’t line up after the project was postponed to 2021. Shank emphasized that it was more about painting a message than an actual mural. The message was plain because he didn’t want flowery artwork to distract from it.

“I was touched, I was so touched,” Johnson Rice said of the mural.

But beyond the shirts, the mural and retiring jersey No. 34, the Flying Squirrels have been doing more reflection internally. They’ve brought in people of color, including Cheatham, to speak to team’s administrators about how to be a more inclusive organization. They’ve had individual and collective conversations about their social justice role as a high-profile business in the community, Parnell said.

“We can use our platform of 400,000 fans during the summer and literally millions of people that know about us to tell the Richmond 34 story,” Parnell said. “We want to tell that story.”

The Flying Squirrels also put together a Richmond 34 Legacy scholarship fund to support students at Virginia Union University and Virginia State. To raise money for the scholarship fund, the Squirrels auctioned off the commemorative jerseys that players wore on Friday and Saturday. The jerseys had Richmond 34 Legacy patches and the “End Racism” emblem.

Like many others in Minor League Baseball, the organization knows it still has a way to go: Parnell says the front office isn’t reflective of the community because it largely consists of white men, like himself. In partnership with VUU and Virginia State, the Flying Squirrels started an executive training program to help create a more diverse workforce and help elevate minorities to professional baseball leadership positions. Carnie Bragg, a Virginia State student, is part of the program during its inaugural year.

For the Flying Squirrels, the weekend was just the start. “We look forward to the future,” Parnell said. “This isn't the culmination of anything, this is the beginning of everything.”

Diego Rincones’ two-run homer to left field in the eighth inning lifted the Flying Squirrels over Somerset, 8-7, in the final game of a six-game series.

Richmond trailed 5-1 early before Sandro Fabian’s home run to center field tacked on three runs. In the seventh inning, a homer from the Patriots re-extended their lead to three, but Richmond immediately cut it back to 7-6 behind Heliot Ramos’ home run.

The Squirrels finished the series with four of six wins over Somerset. They’ll face Akron next week before returning to The Diamond to play Bowie.

Vince Fernandez homered for the sixth time in his past nine games, and the Squirrels continued a power surge by going deep four times to beat Somerset 7-3 in a weather-shortened game at The Diamond.

Richmond has homered 19 times in the past 10 games. Also going deep for the Squirrels were Diego Rincones, Simon Whiteman and Will Wilson.

Richmond beats the Somerset Patriots at the Diamond Saturday, July 18, 2021.

A fan wore one of the 1,000 “End Racism” T-shirts designed by Marc Cheatham that the Flying Squirrels distributed to fans at The Diamond on Friday night.

Elizabeth Johnson Rice, one of the Richmond 34, speaks during a ceremony at the Diamond Wednesday, Feb. 24, 2021, as the Flying Squirrels retire the #34 to honor the Richmond 34. Rice was one of 34 VUU students who held a peaceful sit-in protest at the whites-only lunch counter of Thalhimers Department Store in downtown Richmond in 1960.