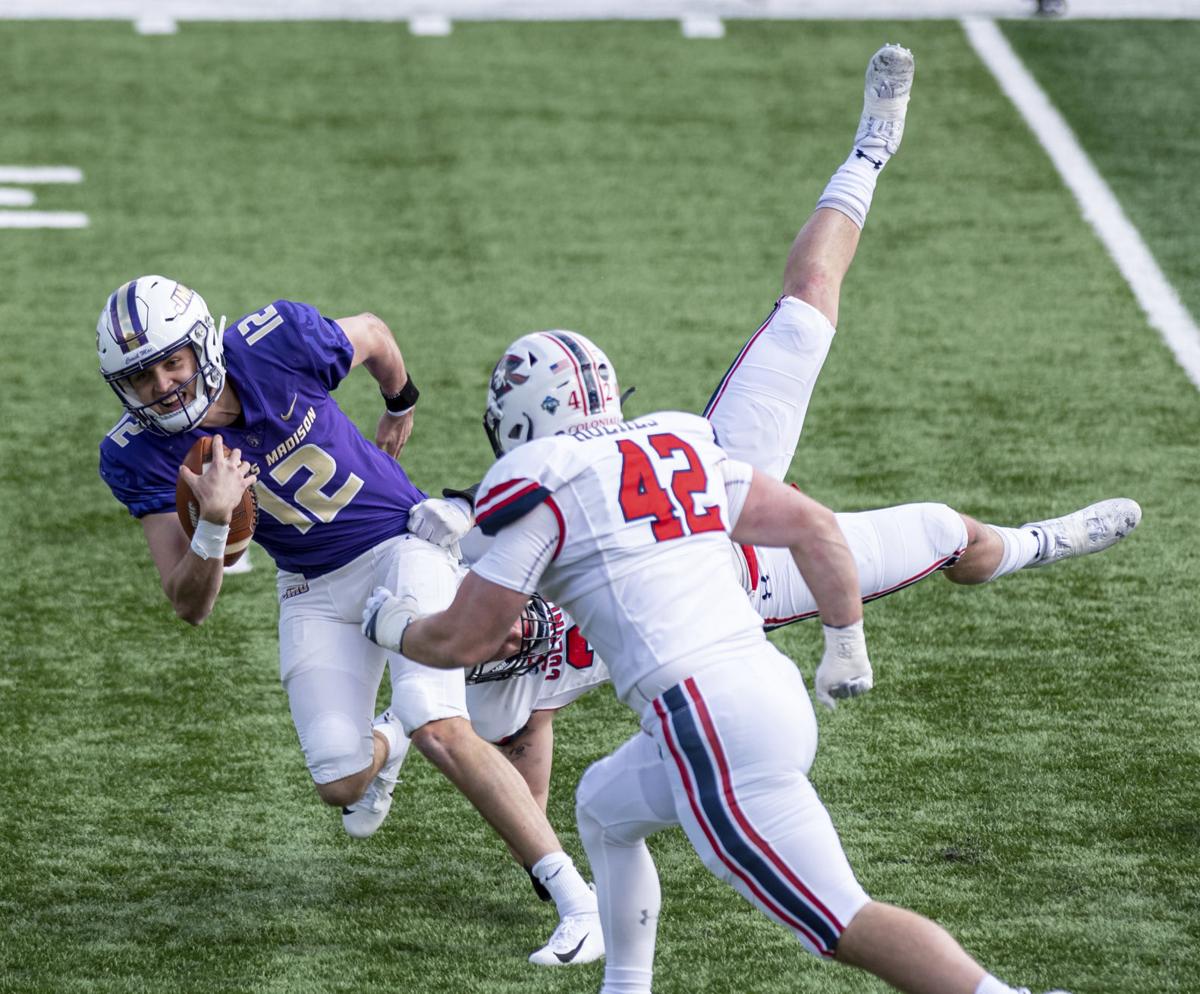 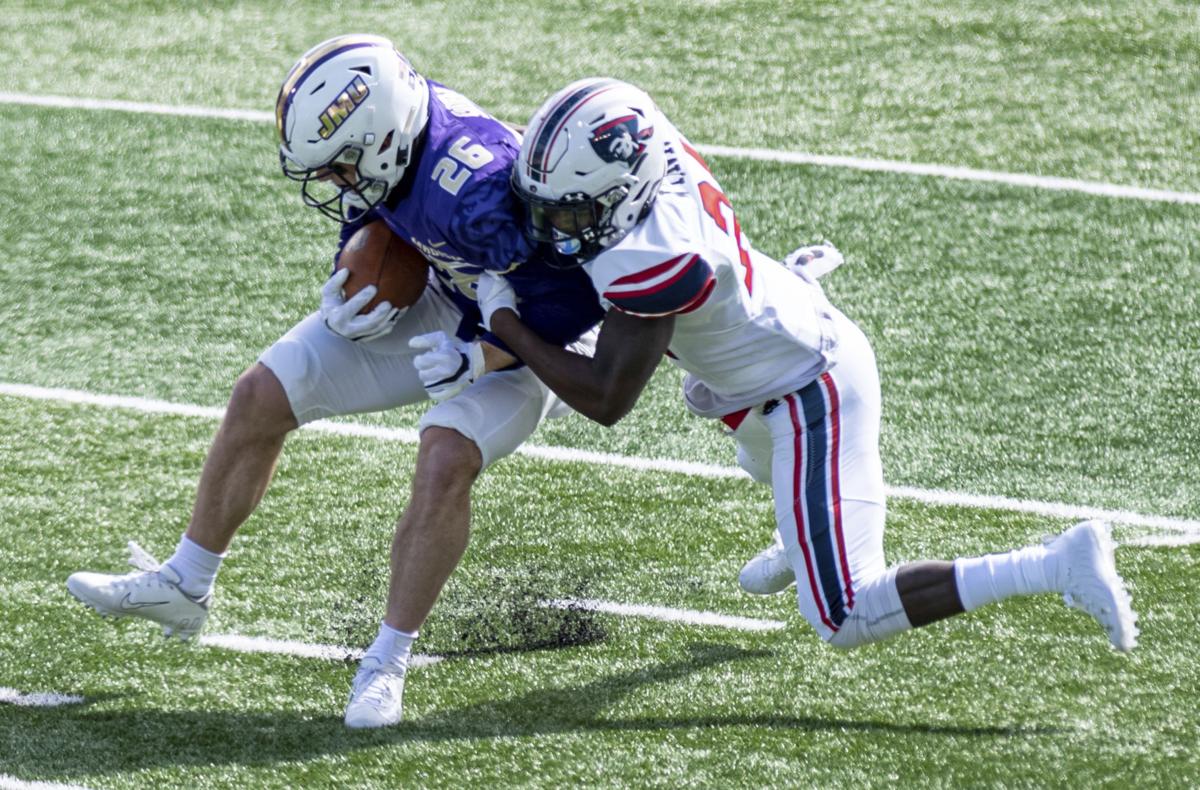 James Madison cornerback Jack Sroba is tackled by Jonathan Wynn of Robert Morris in the first half of the Dukes’ victory Saturday in Harrisonburg.

By BEN CRAFT The News Virginian

HARRISONBURG — It was a far cry from the 66-point blowout when the teams first met in 2018, but the James Madison football team overcame a sloppy first half to defeat Robert Morris 36-16 on Saturday at Bridgeforth Stadium.

The score was tied at 16 at halftime, but the Dukes (2-0) dominated the second half on both sides of the ball, scoring 20 unanswered points.

JMU coach Curt Cignetti said his team did not come into the game with the right mindset. “You can’t be complacent,” he said. “You can’t be more worried about how you look in pregame warmups or what color shoes you’re wearing. We can’t think we’re unbeatable because we’re not.”

On JMU’s first series, quarterback Cole Johnson missed on a pair of throws, leading to a punt, which the Dukes did just once in their blowout win over Morehead State last week.

Despite the lack of live game reps, JMU senior Harry O’Kelly delivered a nice punt that pinned the Colonials on the 1-yard line. On a subsequent play, a botched snap sailed through Robert Morris’ quarterback George Martin’s hands, over his head and out of the end zone for a safety to give JMU a 2-0 lead.

The Dukes’ offense struggled in the first quarter. Johnson threw two interceptions that resulted in a field goal and a touchdown for Robert Morris that put JMU in a 9-2 hole.

“We were sleepwalking early in the game,” Cignetti said.

The first sign of life for JMU’s offense came halfway through the second quarter, when a kick catch-interference penalty allowed the Dukes to start a drive deep in Colonials territory. On the next play, redshirt junior wide receiver Kris Thornton sprinted by the defenders on a wheel route and caught Johnson’s pass for a 33-yard touchdown.

Robert Morris responded on the next series. Tight end Jerry Hanks Jr. made a one-handed catch for a 37-yard touchdown to put the Colonials back on top.

With 4:17 left in the second quarter, Johnson threw up a contested deep-ball that was picked off by Robert Morris safety Jacob White, the Dukes’ third interception of the half. With Johnson struggling, Cignetti said he considered a change at quarterback but decided to see how Johnson finished the half.

“I was close to putting Gage [Maloney] in at the end of the first half,” Cignetti said. “[Offensive coordinator] Shane [Montgomery] talked about it a little bit, and where we got the ball and the situation with 2 minutes before the half, we thought it was really wise to stay with Cole.”

Johnson led a 60-second drive capped by a 21-yard touchdown pass to freshman Antwane Wells Jr. to even the game.

Cignetti said his team was fortunate to be in a tie at the half. “You’re lucky when you’re down 0-3 in the turnover ratio that you’re tied at the half and not down 24-0,” he said.

The Dukes’ ground game got going in second half when Percy Agyei-Obese ran 7 yards for a score to give JMU the lead for good.

On the next possession, a big hit from JMU linebacker M.J. Hampton forced a fumble, which Hampton recovered, leading to an Ethan Ratke field goal to put JMU up 26-16. Another field goal by Ratke and a second touchdown for Agyei-Obese with 3:13 left in the fourth quarter sealed the game.

James Madison cornerback Jack Sroba is tackled by Jonathan Wynn of Robert Morris in the first half of the Dukes’ victory Saturday in Harrisonburg.