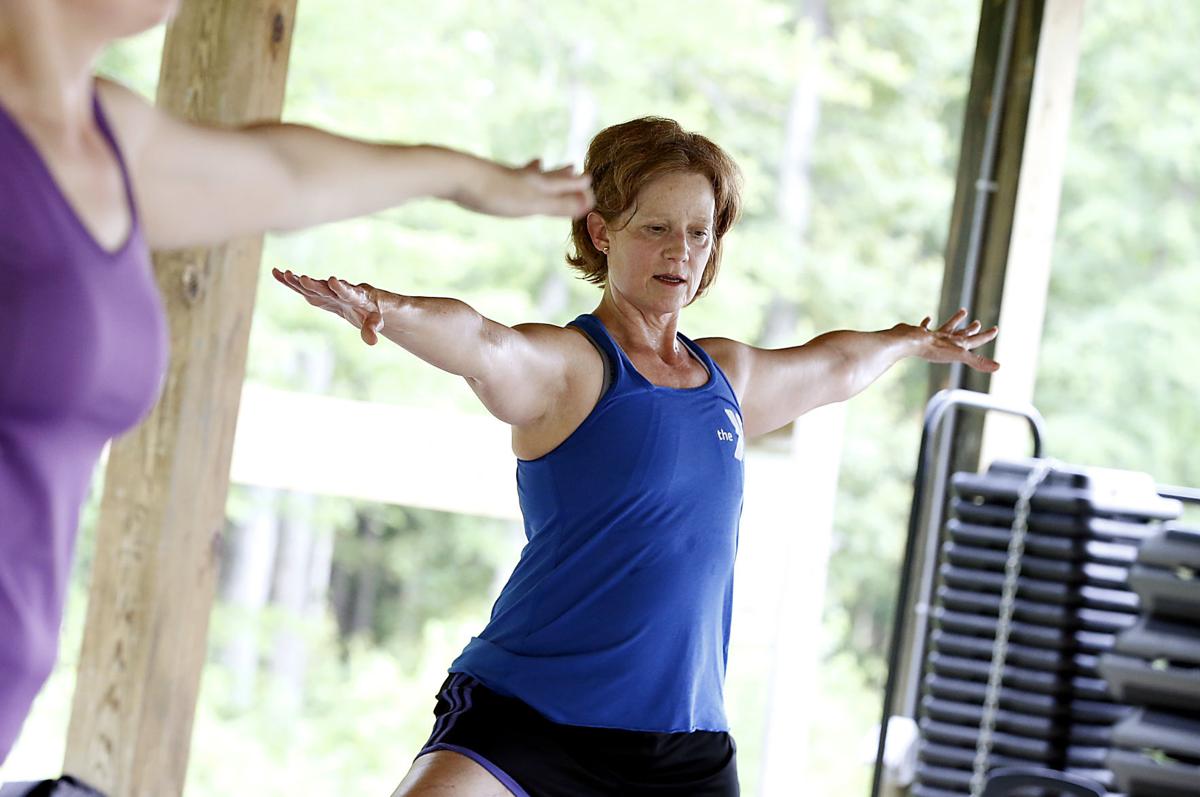 Leigh Grant teaches an outdoor yoga class at the Swift Creek YMCA on Wednesday. Grant frequently taught at local YMCAs until she collapsed during a step class in 2001. She discovered she had a severe heart condition, one that necessitated a heart transplant. 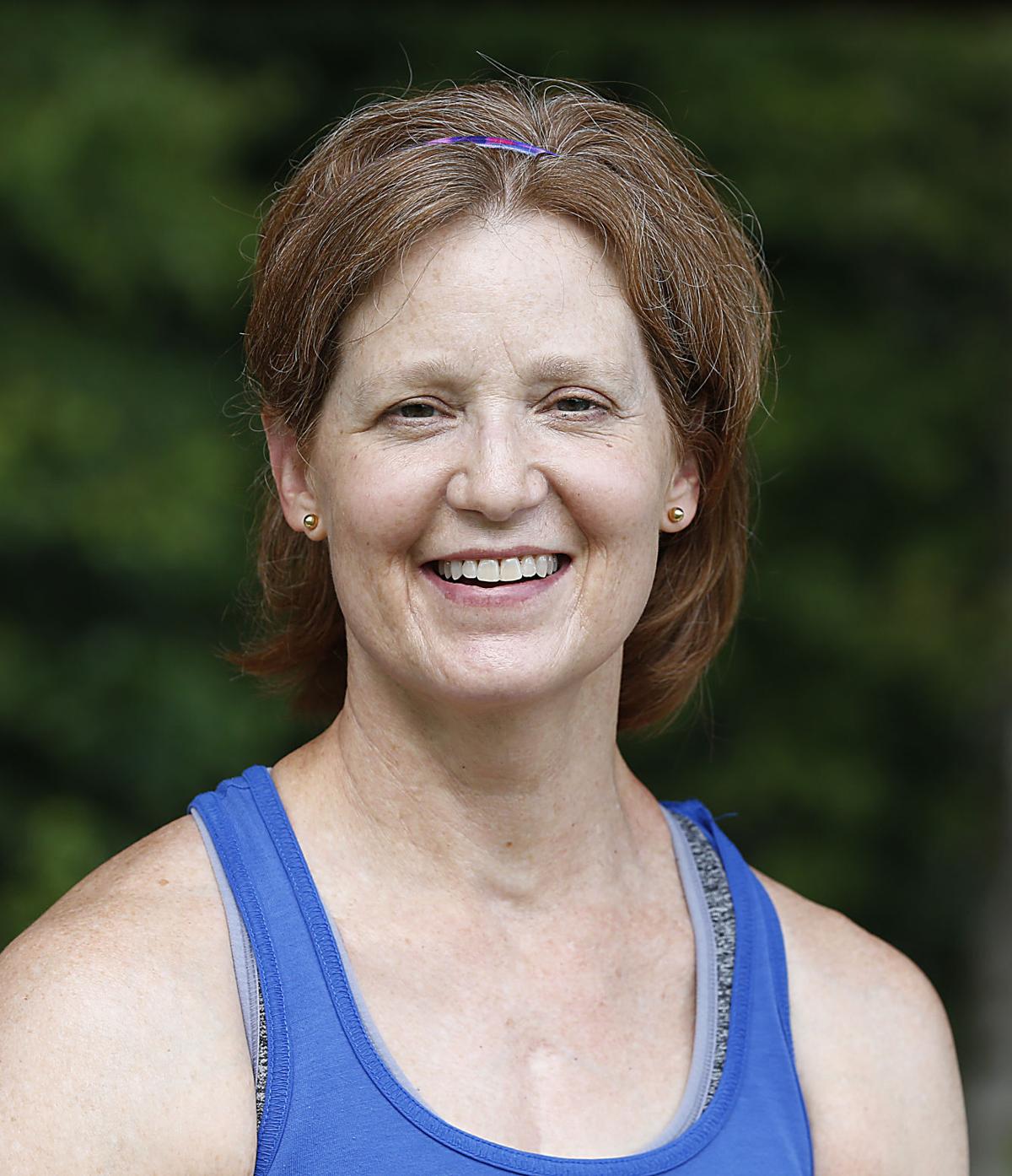 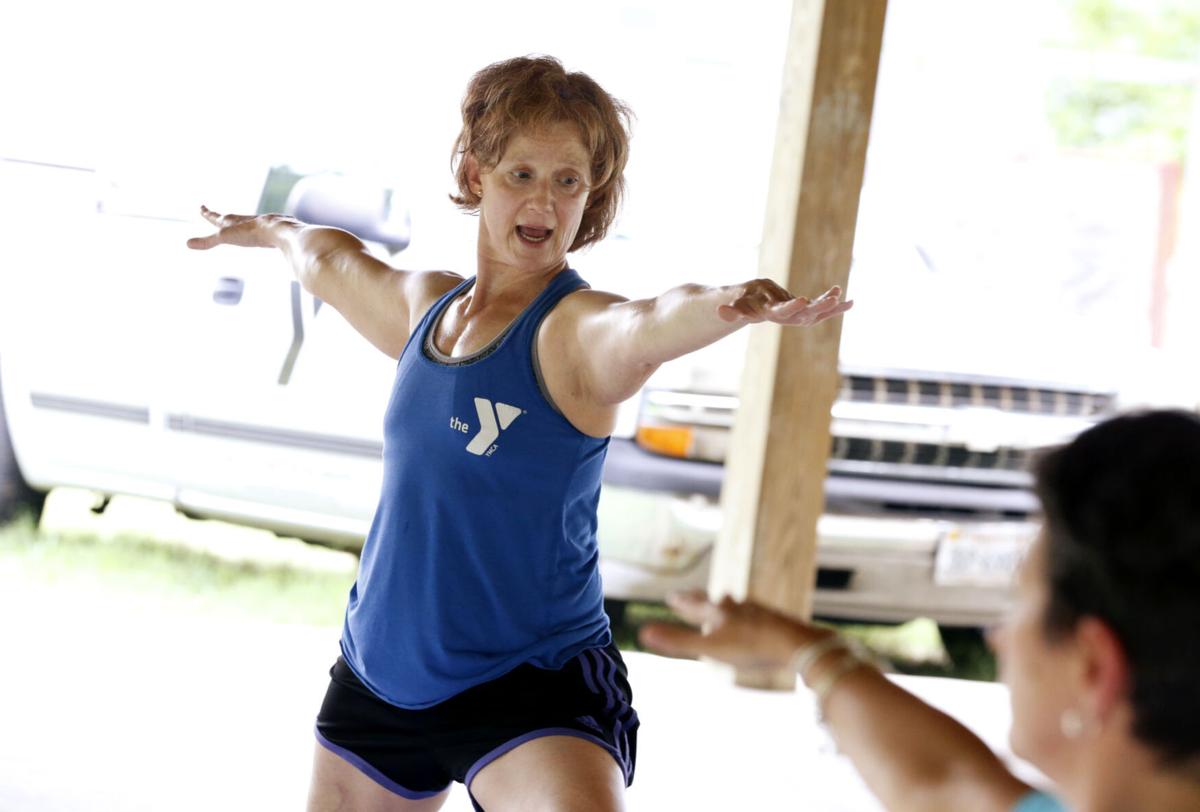 Since getting her new heart, Leigh Grant has returned to teaching her fitness classes. She’s also on the verge of running her fourth straight Richmond Half Marathon. 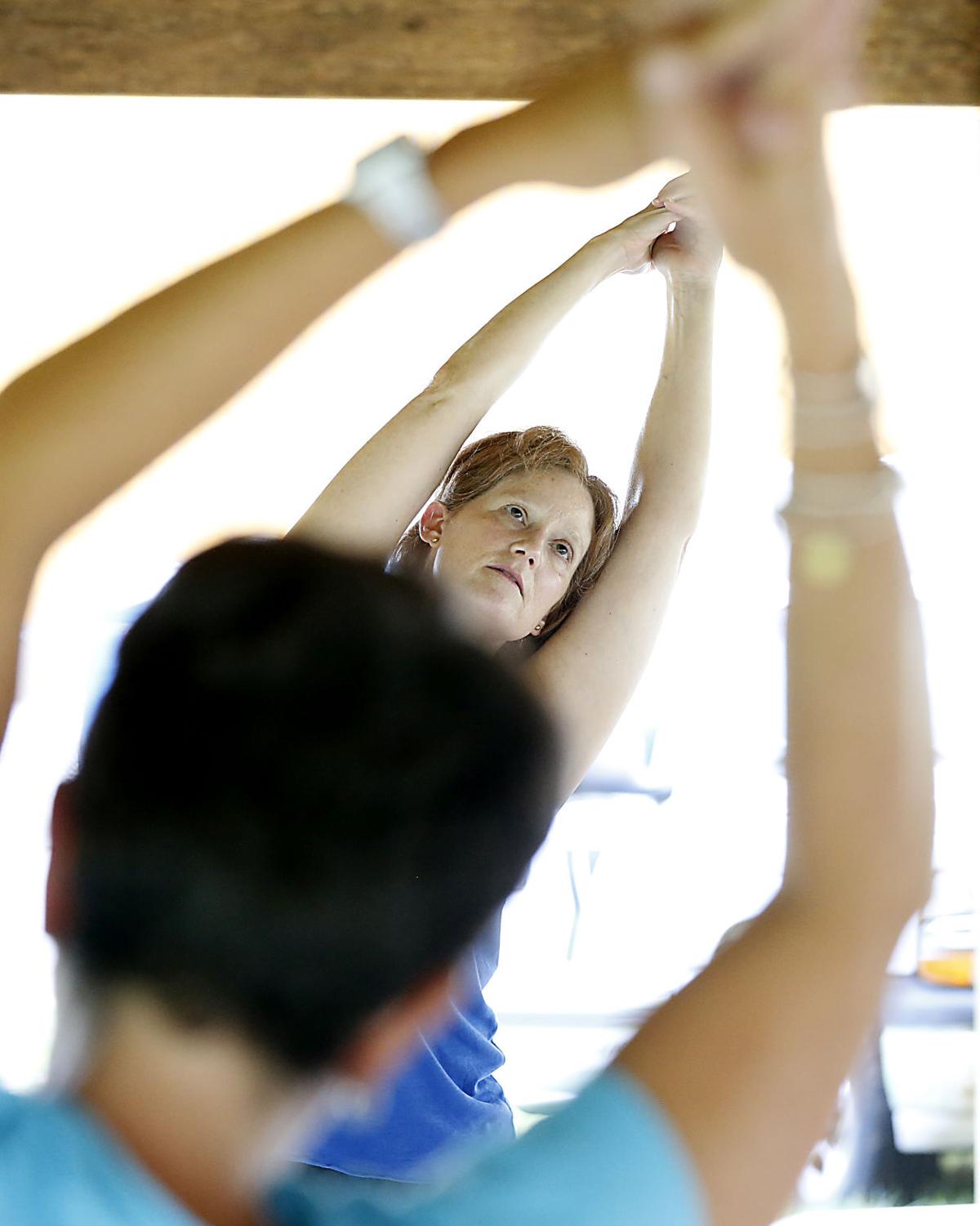 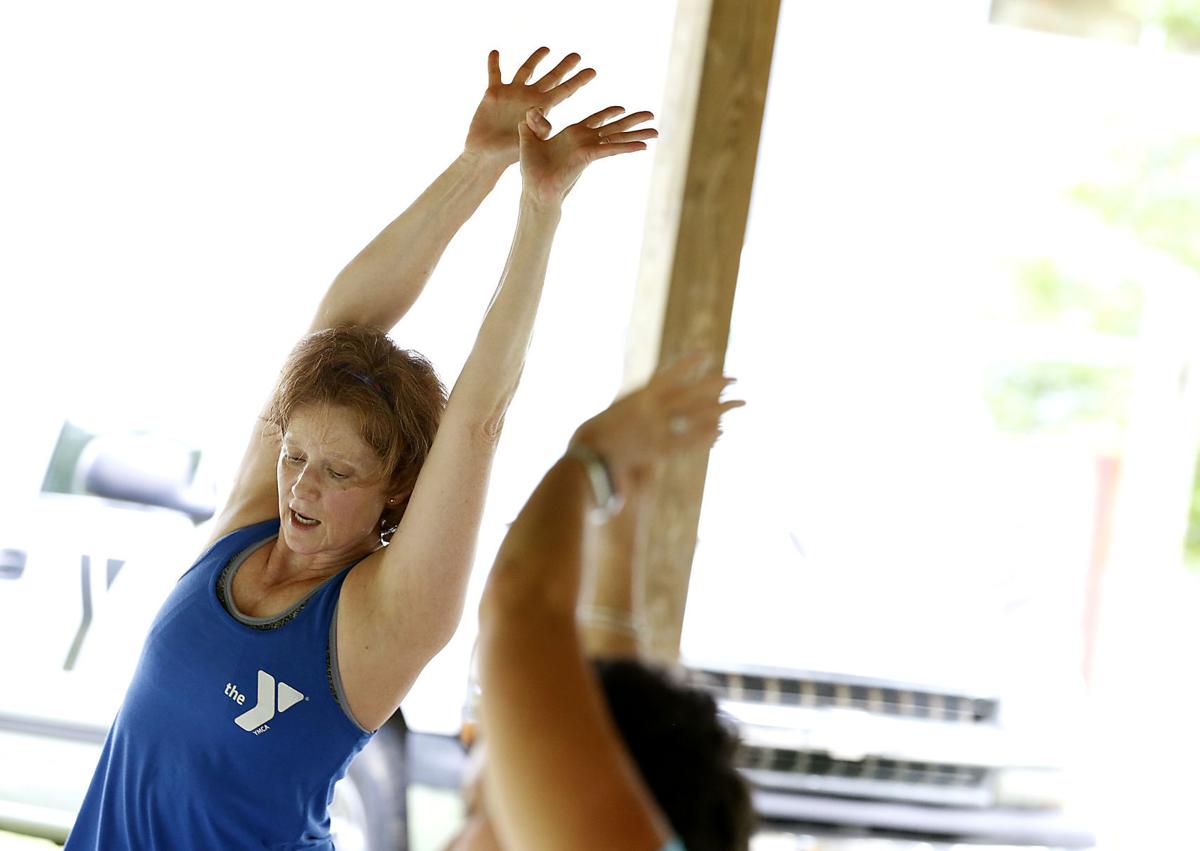 Leigh Grant signed up recently for the Richmond Half Marathon which, COVID-19 permitting, is scheduled for Nov. 14.

If she actually gets to run the prescribed route, it’ll be her fourth consecutive late-fall, 13.1-mile venture through the streets of her hometown.

For a motivated 57-year-old woman who has taught fitness classes for almost 30 years while working a day job and raising a family, it might seem a golden opportunity to test her mettle against whatever elements present themselves that Saturday morning, a host of other athletes and the stopwatch.

It is, of course, but there’s much more to Grant’s story than pounding the pavement.

She’s not running for time. In fact, a ticking clock is the least of her concerns.

The hard truth is that she’s competed in an epic race to the finish before, and it had nothing to do — literally, that is — with putting one foot after another until she reached her destination.

It had everything to do with staying alive.

Grant is a heart transplant survivor. After a period of declining health that had her in and out of doctors’ offices and hospitals, she received her gift of life on June 18, 2009, at Inova Fairfax Hospital.

Ever since, she has done all within her power to make the most of her second chance and, by so doing, honor the miracle which occurred that summer night just over 11 years ago.

“When you’re active and then start to deteriorate, you’re watching yourself die,” she said. “Your family’s watching you die. I’d done everything right. I’d never smoked. I don’t drink. My body had betrayed me.”

Leigh’s fitness journey began in earnest during her college years at William & Mary when she started jogging, mainly to fulfill a P.E. credit but, once she realized its value, for exercise.

Post-college, the L.C. Bird graduate landed a part-time job as a fitness instructor at the Manchester, Midlothian and Chester YMCAs, so a healthy lifestyle had become — and would remain — an integral part of her culture.

That’s when her health journey began, through no fault of her own and with no warning whatsoever.

“Six months after my second child was born,” she said, “I was teaching a step class at the Manchester Y and just blacked out. Collapsed.”

She was transported to the emergency room, checked by the medical staff, and released. She followed up with her family physician, who referred her to a cardiologist.

Her diagnosis was postpartum cardiomyopathy.

“They don’t know exactly what causes it,” Grant said. “My understanding is that some women get it and their heart heals. Mine didn’t.”

Doctors implanted a defibrillator in her chest which enabled her to go about her life, being ever vigilant and compliant, until her health took a downturn in October 2007.

“I was at my older son’s soccer game,” she recalled. “I just wasn’t feeling good. There was a sense of urgency, like, I have to get to a hospital. Something’s not right.”

Rather than call 911, she dropped her sons at home, called her sister to take care of them, and drove herself to Bon Secours St. Francis Medical Center.

“Almost stopped on the way at a fire station,” she said, “but I kept on going. One of my grandfathers died of a massive heart attack. The other was a stubborn Midwesterner who drove himself to the hospital in the middle of a heart attack. You would think I’d know better.

“When I walked through the door of the ER, I thought I was going to collapse. The heart muscle was starting to fail. It wasn’t an electrical problem. It was a pumping problem.”

Over the next few months, which included several hospitalizations, doctors attempted to control her heart issues with medications.

In September 2008, she had her first evaluation at Inova Fairfax.

“I was supposed to stay overnight for observation,” she said. “I was there a month. That wasn’t what I was expecting.”

As a temporary solution, doctors equipped her with a left ventricular assist device, a battery-operated mechanical pump which helps the left ventricle supply blood to the rest of the body.

After further testing, she was listed for a heart transplant.

By this time, Grant was unable to work at her job as an analyst for Air, Water, and Soil Laboratories or teach at the Y. In fact, she was unable to do much of anything except persevere, maintain a positive attitude, keep her bags packed and await word that a donor heart was available.

“You have down times when you feel like you can’t take this anymore,” she said. “That’s when you just have to take the next step.”

The call came nine very long months later. Her husband rushed her up I-95. Surgery began early the evening of June 17. She went to the recovery room just after midnight.

According to data provided by the United Network for Organ Sharing, she was one of 2,212 people nationwide, including 72 in Virginia, to receive heart transplants in 2009.

Leigh emerged from the fog of anesthesia a week later.

“It was sort of dark in the room,” she recalled. “I didn’t even know if I was still alive. A nurse caught me up on all that had happened. He told me Michael Jackson and Farrah Fawcett had just passed away. I remember thinking, Did I cross over with celebrities?

“I remember feeling warm. My face felt flushed. I finally had blood circulating. Actually, I was terrified because I could feel a strong heartbeat. When you’re a heart failure patient and your heart beats like that, it’s a problem. You’re always listening to your heartbeat. This was good, though, but I had to get used to it.”

Grant remained in the hospital for a month. Once back in Richmond, she slowly began to regain her strength and mobility and chart her comeback.

“The physical healing will happen on its own timeline, but your mindset has to be one of victory,” she said. “I was going to be victorious.”

In 2010, she resumed her part-time position at the Manchester Y, this time assisting members in the fitness center.

By 2012, she was teaching fitness classes again at Swift Creek.

A biology and psychology double major in college, she earned a teaching certificate and spent two years (2014-2016) as the lone science instructor at Guardian Christian Academy.

That new version included venturing into competitive sports, something she had never done before.

In October 2011, she won several medals in swimming, track (mainly sprint events) and the 5K at the Virginia Transplant Games.

Inspired by her donor, known to her only as a man who was a father and an athlete, she’s competed in numerous local 5K races as well as the Monument Avenue 10K.

She undertook her first Richmond Half in 2017. Crossing the finish line at 5th and Tredegar that first time was the ultimate runner’s high.

For Leigh Grant, the journey — long, arduous, and devious — continues.

Just as her resilience, resolve, and commitment to fitness enabled her to fend off the ravages of heart disease until there was little fight — physical fight, that is — left in her, likewise they have enabled her to transmogrify into the athlete and person she has become.

She long ago put her faith in her transplant team and follows to the letter of the law her regimen of medications, understanding full well that they suppress her immune system and make her vulnerable to infection even as they mitigate the risk of her body rejecting her heart of gold.

Her buoyant spirit and delightful sense of humor sustain her, and she draws strength from family and friends who helped, and continue to help, as she navigates this challenging yet meaningful odyssey that has delivered her to her new normal.

“Mindset is so important,” she said. “You have to keep your thoughts pure. If you have negative thoughts, you have to set them aside and replace them with positive ones. I have some friends who helped keep me in the right head space.

“I’ve grown in leaps and bounds. It sounds more physical, but it was definitely a psychological battle and a spiritual battle, and I don’t regret it.

“I feel really good. My quality of life is more than I could have ever asked for. Obviously, God had a plan for me, and I have to respect that plan.”

Jerry Lindquist's sports memories: Notes and quotes from 47 years on the job

In the old — good old? — days of yesteryear, before social media that distorts more than reports, notes columns were all the rage. They also w…

Leigh Grant teaches an outdoor yoga class at the Swift Creek YMCA on Wednesday. Grant frequently taught at local YMCAs until she collapsed during a step class in 2001. She discovered she had a severe heart condition, one that necessitated a heart transplant.

Since getting her new heart, Leigh Grant has returned to teaching her fitness classes. She’s also on the verge of running her fourth straight Richmond Half Marathon.