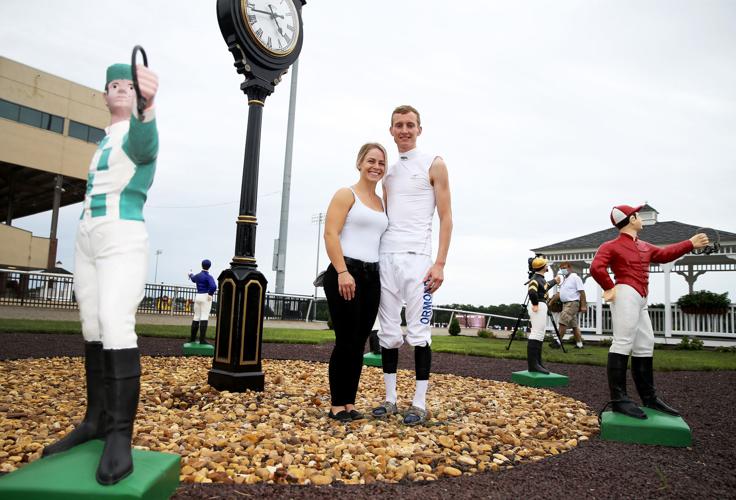 Colonial Downs jockeys Katie Davis and Trevor McCarthy estimate they’ve competed against each other in 500-600 races since they started dating. 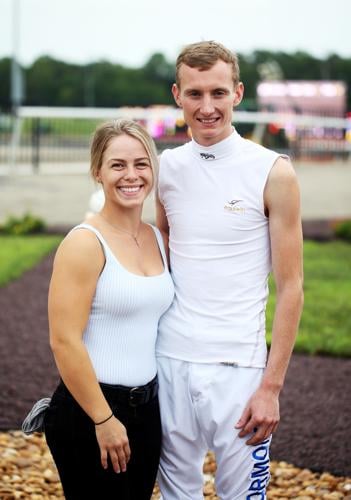 Katie Davis and Trevor McCarthy, who are jockeys and engaged, are shown at Colonial Downs in New Kent County on Monday, August 3, 2020.

For Trevor McCarthy and Katie Davis, horse racing has always been a family affair.

The two jockeys come from racing households. Their fathers, Michael McCarthy and Robbie Davis, won a combined 6,289 races between the early 1980s and early 2000s. Katie Davis has two siblings, Dylan and Jackie, who are also jockeys and another brother, Edmund, who is a trainer.

When McCarthy and Davis were young — about 3 and 5 years old, respectively — Davis’ father invited McCarthy’s father to go boating and fishing.

“My parents go, ‘Man, we remember a little boy and a little girl. And we brought you,’” McCarthy said. “And that was probably the first time we ever met.”

Years later, when both were two boots into the riding business themselves, they reconnected through racing. Their relationship blossomed, and they began to date.

McCarthy proposed almost a year ago, and the couple is due to be married in December, after a delay created by the coronavirus.

The jockeys from Millersville, Md., have a bond strengthened by a mutual understanding of the grind that is horse racing. Their competitiveness runs high, even in the hundreds of times they’ve ridden against each other. But they also recognize the level of support the other needs in a business that can be difficult.

The two are currently anchored at Colonial Downs for the New Kent track’s 2020 meet, continuing to share the type of life they each grew up in.

“This sport is very [about] dedication, [determination], discipline,” Davis said. “And if you don’t have all three of those, or even more, you’ll never move forward. And, I guess, we support each other more than you can ever think of.”

After the initial encounter as kids, the paths of McCarthy, 26, and Davis, 28, intertwined in recent years at a few different racetracks.

Davis was riding full time at Delaware Park at one point, and McCarthy would travel there to ride about three days a week when not running in Maryland. It was there that they began to get to know each other. That continued as Davis made the move to ride in Maryland at Laurel Park.

Eventually, about three years ago, the two started dating.

But the somewhat nomadic horse racing lifestyle can present challenges to a burgeoning relationship. It was tough at first. They were both busy, with different schedules.

Davis could find herself in West Virginia or Pennsylvania and McCarthy in Delaware, for instance. There’s days they don’t see each other until the end of the night.

Yet downtime is dedicated to the other. When one isn’t riding, it’s an opportunity to join the other.

McCarthy said they’ve both probably had relationships in the past where the other person didn’t understand the lifestyle. That certainly isn’t a problem between him and Davis.

“We definitely make time for each other. We always do,” McCarthy said.

“Yeah, that’s key,” Davis added. “Because you can get lost in the business so fast.”

The support is important in a sport where success can ebb and flow dramatically. As McCarthy said, he could have an instance where he wins five races in a day — like he did Sunday at Colonial Downs.

Then there’s times when a rider goes multiple days or weeks without a win.

“I think that’s a big thing for the both of us, is keeping that confidence,” McCarthy said. “And when the other one’s down, to pick them up.”

McCarthy said if anybody finishes ahead of him, he hopes it’s Davis. The couple estimates they’ve ridden against each other in 500-600 races since they started dating.

But it’s still a business and they each have a job to do.

“In the beginning it was tough,” Davis said of racing against each other. “We used to come home mad. And I’m like, ‘Oh, let’s sit down, wait a minute. We can’t be doing this, this is going to ruin our relationship.’ And we really learned a happy medium between it.”

The couple set a date of April 4 for their wedding, out in Big Sky, Mont. They rented a big house for their respective families to stay in. But they were forced to press pause about a week out because of COVID-19. They wound up rescheduling the wedding there for Dec. 17.

In the meantime, this year’s schedule at Colonial Downs has brought McCarthy and Davis a bit of a change of pace.

The meet, which started July 28, runs through Sept. 1, three days a week. Because of Colonial Downs’ coronavirus protocols, any jockey who leaves the track to run elsewhere must undergo a 14-day self quarantine and provide a negative COVID-19 test before riding at Colonial Downs again.

So McCarthy and Davis are staying put at a nearby hotel, which means more time together.

“Not traveling all the time, with the downtime, we’re not used to that,” said McCarthy, who has been the leading jockey at Colonial Downs this year by far, with 14 wins through Monday. “So now we’re kind of like, ‘What do we do?’ So now we’re like trying to figure out, find things to do, new things to do. Outdoor activities.”

It’s coming up on exactly one year since the two became engaged, Aug. 19. The new wedding is now less than five months away. But for two people with horse racing in their blood, the union seems years in the making.

“It was really weird. How it was like we had things planned and it just felt right,” Davis said. “Like it was meant to be. All the stars lined up, and then we just went for it.”

Taylor Heinicke has done some of his best work in relief.

"It's exciting and for us in this sports world knowing it can be good business to do good business, working in the community, focusing on impact and promoting and investing in women."

Amateur, collegiate and pro athletes will come together at Pole Green Park on Saturday, with $45,000 in prize money on the line.

Richmond's Rick Townsend, who built race cars for some of NASCAR's biggest names, has died

The auto racing community is mourning the death of Henrico’s Rick Townsend, who built race cars for some of the sport’s biggest names.

Colonial Downs jockeys Katie Davis and Trevor McCarthy estimate they’ve competed against each other in 500-600 races since they started dating.

Katie Davis and Trevor McCarthy, who are jockeys and engaged, are shown at Colonial Downs in New Kent County on Monday, August 3, 2020.