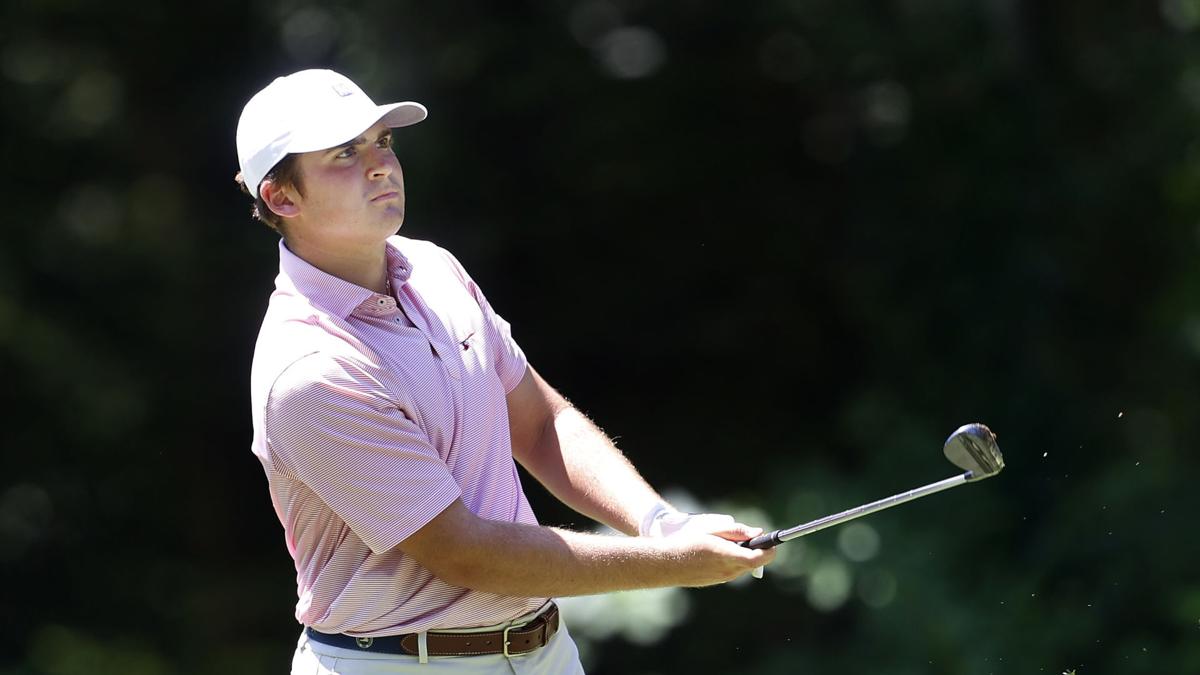 Garrett Kuhla eyes a shot from the fairway during the RGA Junior Championship at Brandermill Country Club Wednesday, July 14, 2021. 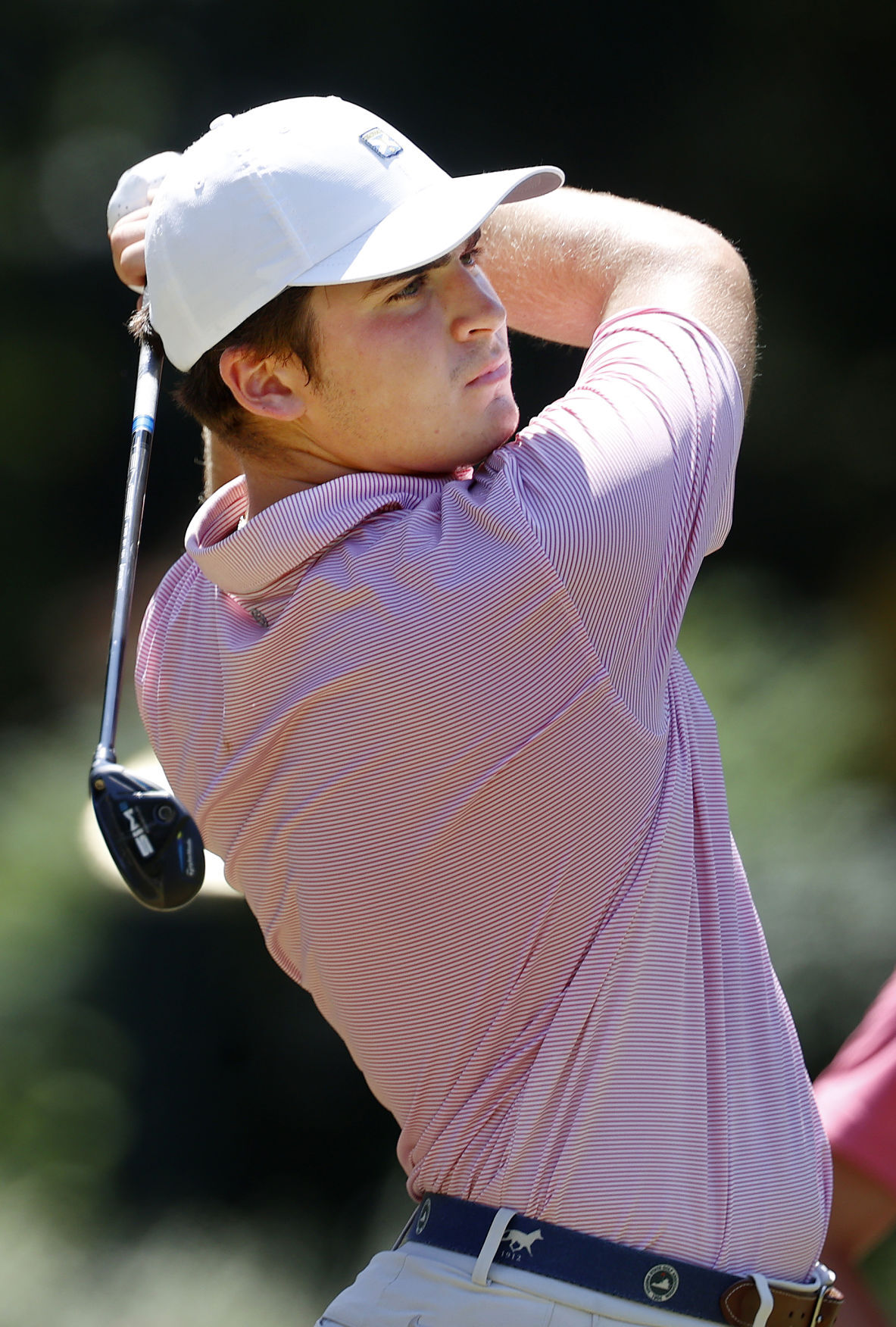 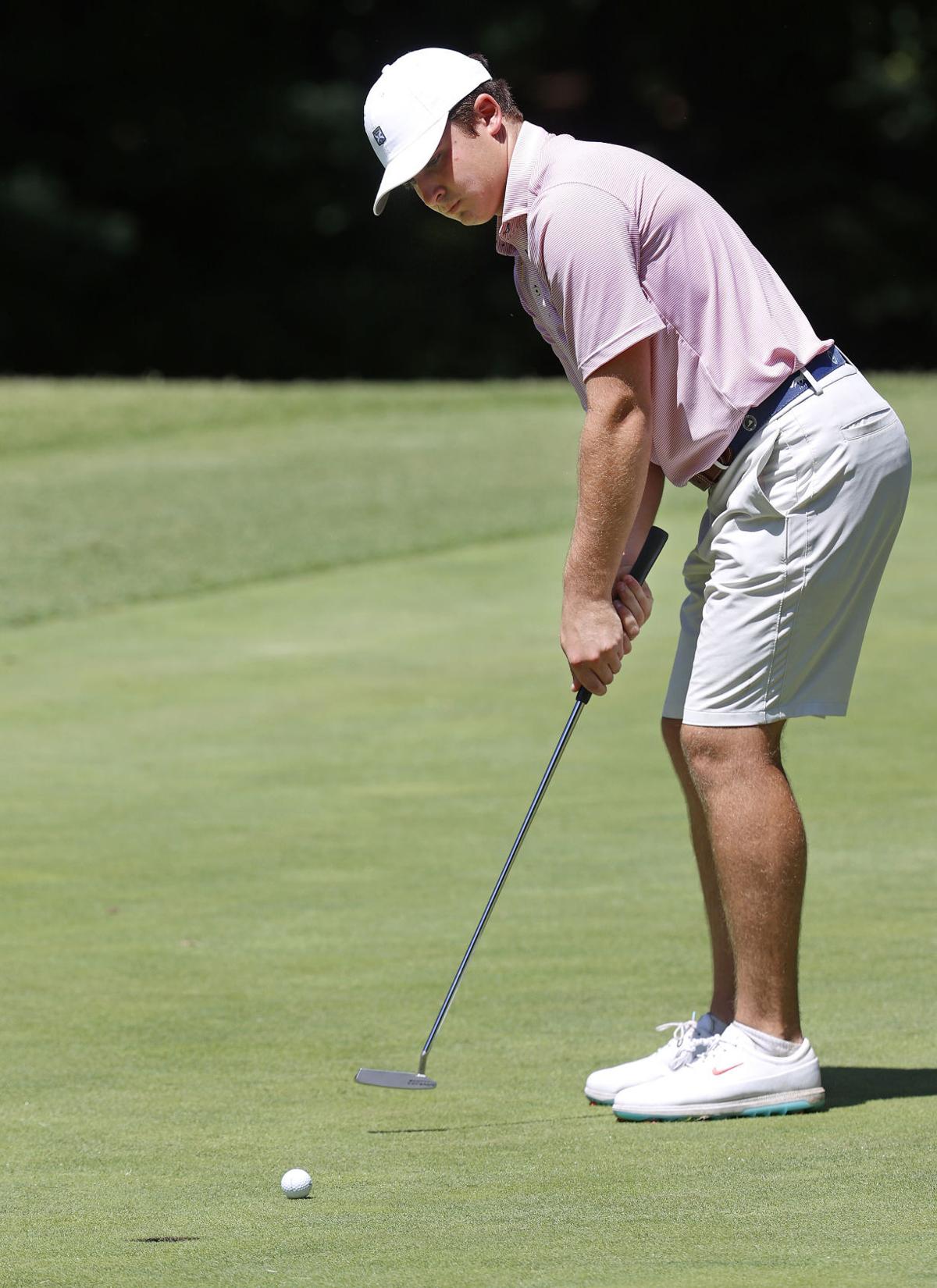 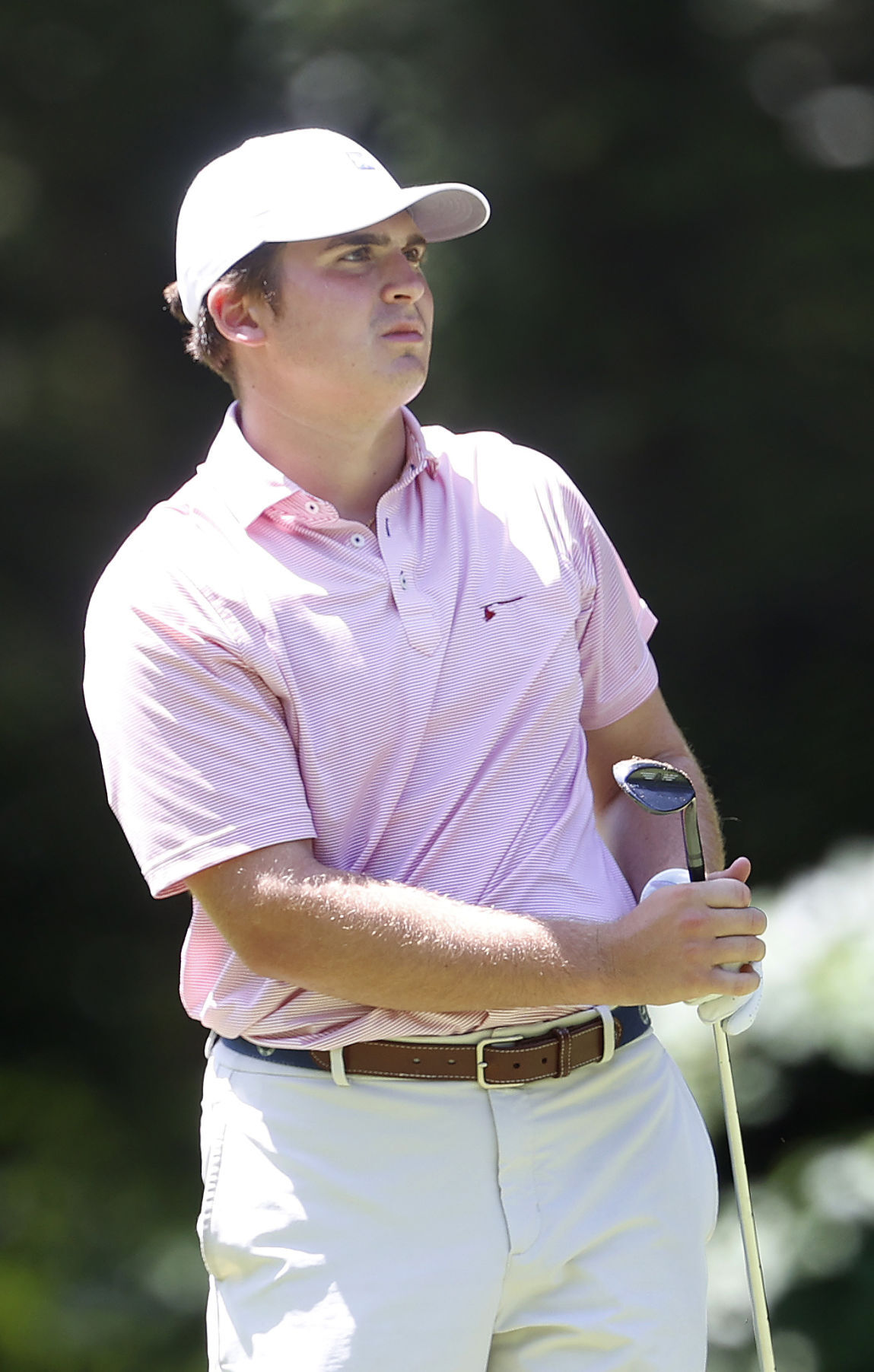 Willow Oaks golfer Garrett Kuhla, a senior at Trinity Episcopal, started the final round with a six-shot lead and cruised from there, ultimately winning by 13 shots. 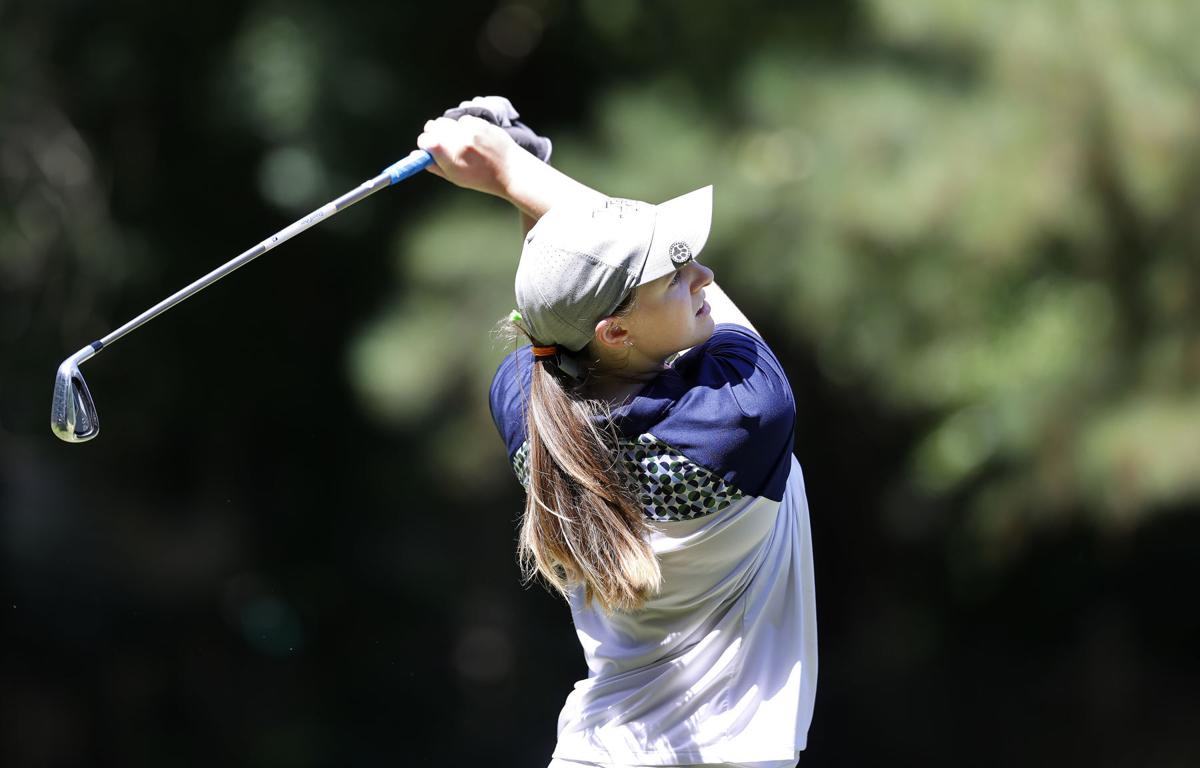 Madison Lehr successfully defended her RGA Junior title with a three-shot victory over Haleigh McPeak at Brandermill Country Club. Lehr is the third girl to capture more than one RGA Junior crown.

Junior golfers, boys and girls, have plenty of tournament opportunities in which to hone their games during the summer.

Garrett Kuhla and Madison Lehr will tee it up in their next tournaments, scheduled at the end of this week and the beginning of next week, as victors in the Richmond Golf Association Junior Championship.

Kuhla, 17 and a senior at Trinity Episcopal, posted a 2-under-par 70 at Brandermill Country Club on Wednesday for a 36-hole total of 1-under 143 to win the boys title.

Lehr, 15 and a sophomore at Mechanicsville High, followed her opening-round 76 with a 5-over 77 to finish with a 153 total and successfully defend the championship she first won in 2020. She is the third girl to win multiple RGA Junior titles.

Kuhla, who plays out of Willow Oaks Country Club, was the only player in the older age groups to break par. He logged three birdies against a bogey on Wednesday and finished 13 shots clear of runner-up Gage Fodrell (81-75—156).

“Gosh I think I’ve been playing in [the RGA Junior], I want to say since I was 9 or 10 years old,” Kuhla said. “I think one year I didn’t play in it because the Bobby Bowers (tournament in Springfield) sometimes conflicts with it, but seven or eight years or so. It’s been a long time coming.”

Kuhla has committed to play golf at James Madison. He began the final round with a six-shot lead.

“I wanted to keep staying aggressive,” he said. “That’s one of the things I’ve been trying to work on this summer. Even when I’ve been playing well, just keep being aggressive, going after pins and not laying up on par-5s. That’s what I did today. I just kept the pressure on … and I really wanted to play well, too, for myself.”

Next on Kuhla’s busy schedule is the Truist State Open of Virginia that runs Friday through Sunday at Independence Golf Club.

Lehr started Wednesday in a tie with Haleigh McPeak, a teammate of Kuhla’s at Trinity Episcopal and a member of the Country Club at The Highlands.

“Coming in tied I was just going to try to play my best and not worry about anyone else,” Lehr said. “She started out really good, and for a while we were neck and neck.”

“To win it one year is nice, but to come back after being tied for the first day and just win it definitely gives me confidence,” Lehr said. “I’ve had some ups and downs lately, but to come and play and shoot 76 and 77, it definitely felt good because I think that’s more where I am and to help boost my confidence for the tournament coming up.”

That tournament is the VSGA Junior Girls Championship at Fauquier Springs Country Club on Monday and Tuesday.

Liam Maclauchlan followed his opening-day 33 with a 36 to win the 12-under age group, which played nine holes each day.

In one aspect of his life, Richmond Flying Squirrels shortstop/second baseman Simon Whiteman enjoys being a problem-solver. He graduated from …

Chesterfield County’s board unanimously agreed to buy the 47-acre plot of land that was previously Southside Speedway.

Garrett Kuhla eyes a shot from the fairway during the RGA Junior Championship at Brandermill Country Club Wednesday, July 14, 2021.

Willow Oaks golfer Garrett Kuhla, a senior at Trinity Episcopal, started the final round with a six-shot lead and cruised from there, ultimately winning by 13 shots.

Madison Lehr successfully defended her RGA Junior title with a three-shot victory over Haleigh McPeak at Brandermill Country Club. Lehr is the third girl to capture more than one RGA Junior crown.