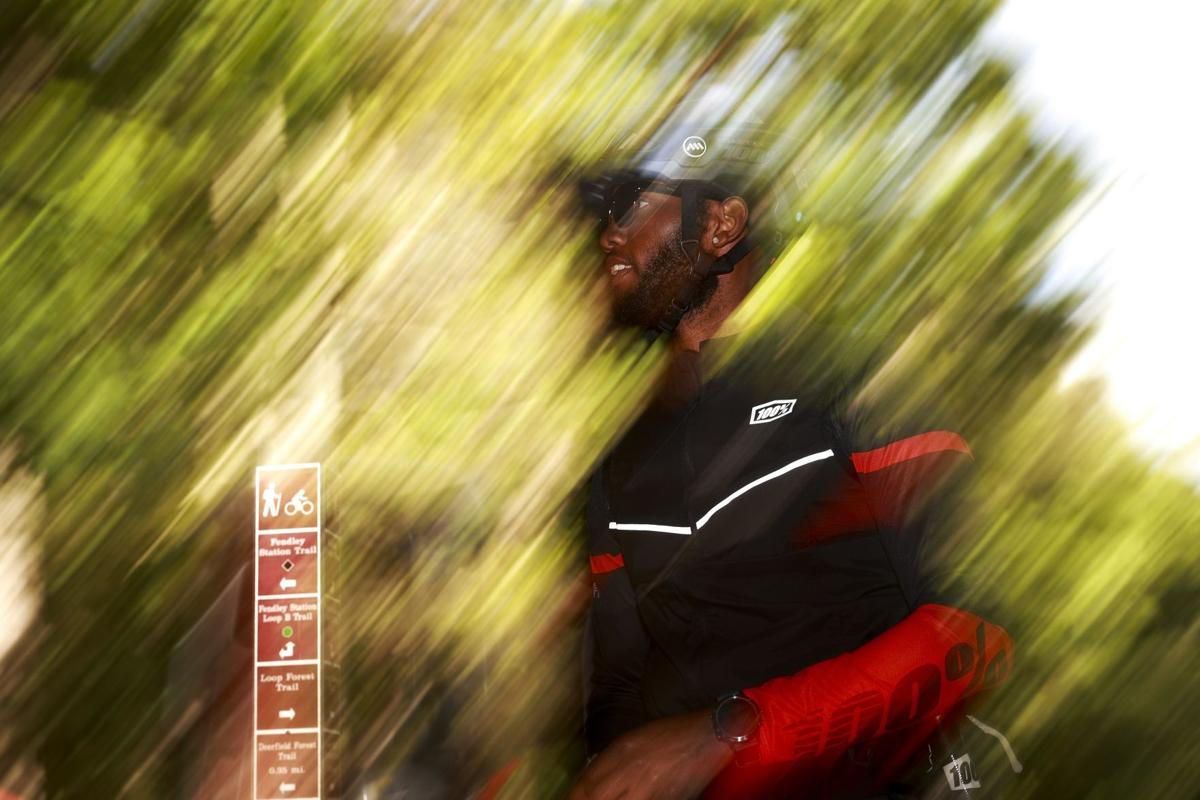 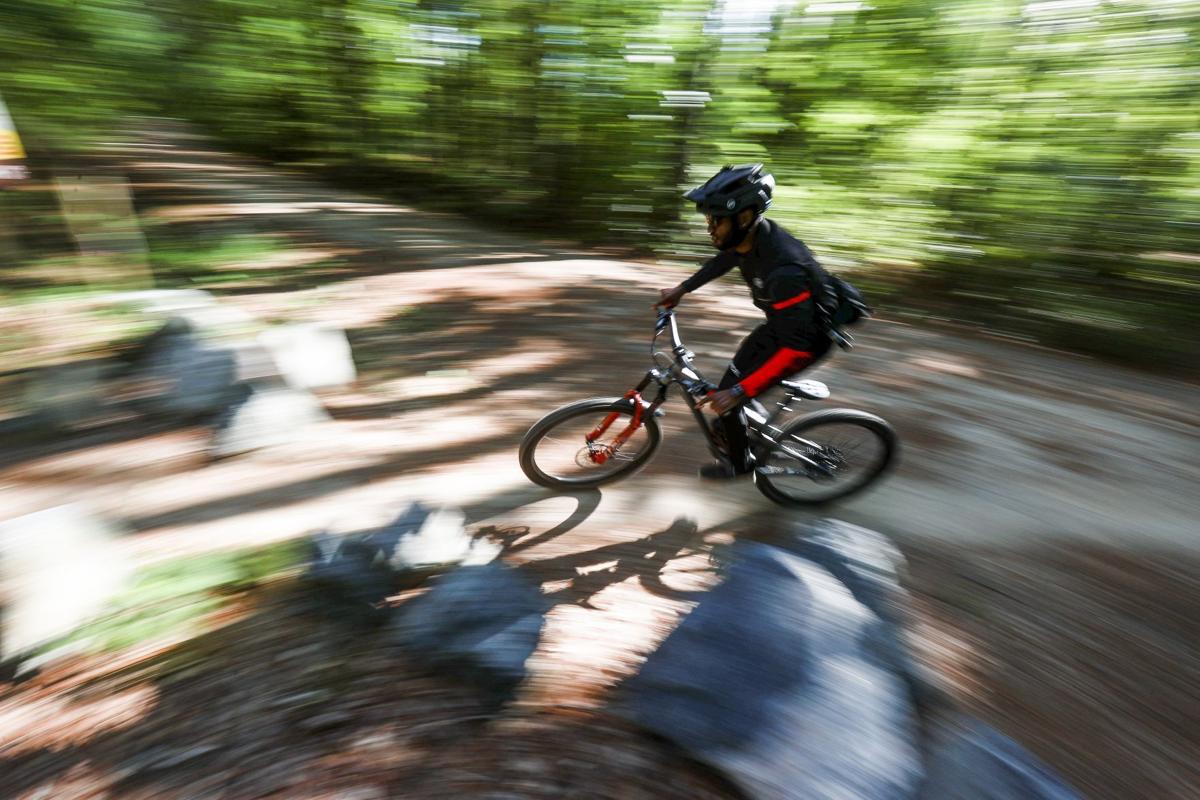 Biker Angelo Washington traversed a trail at Pocahontas State Park in Chesterfield County on Wednesday. He will be taking part in a variety of events at the Riverrock festival this weekend. 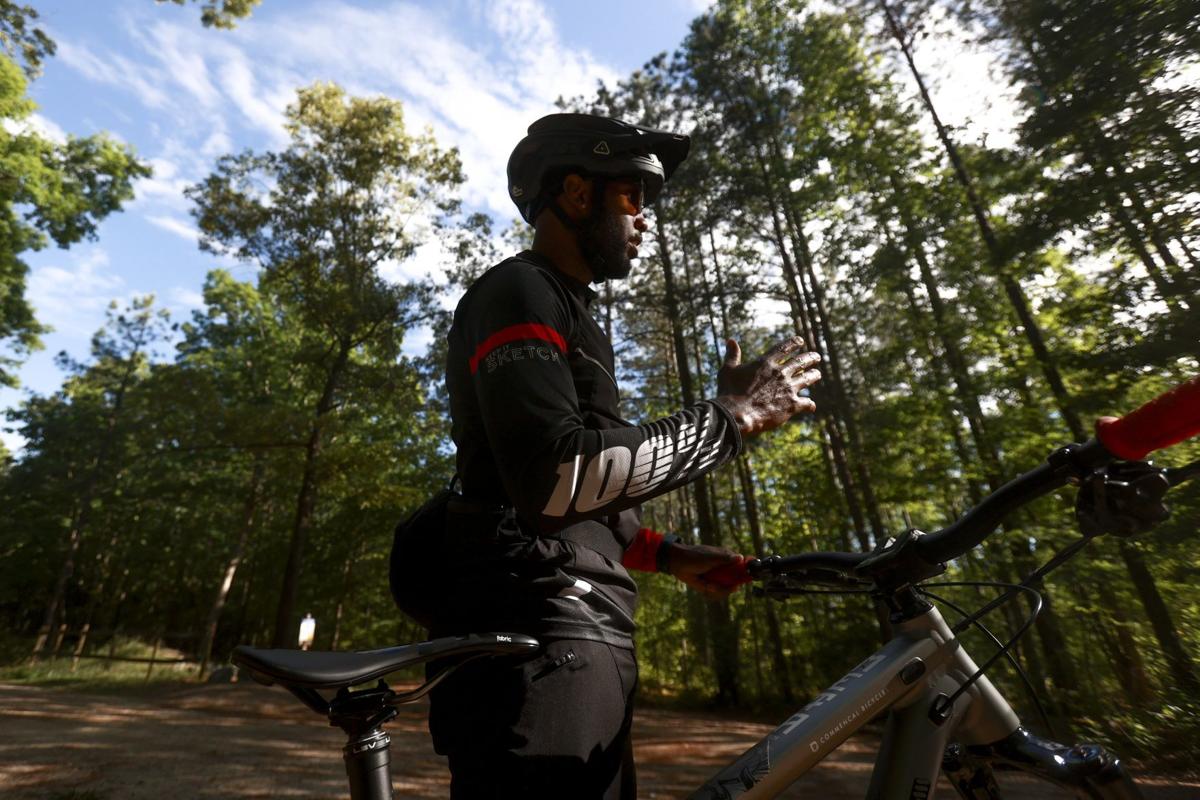 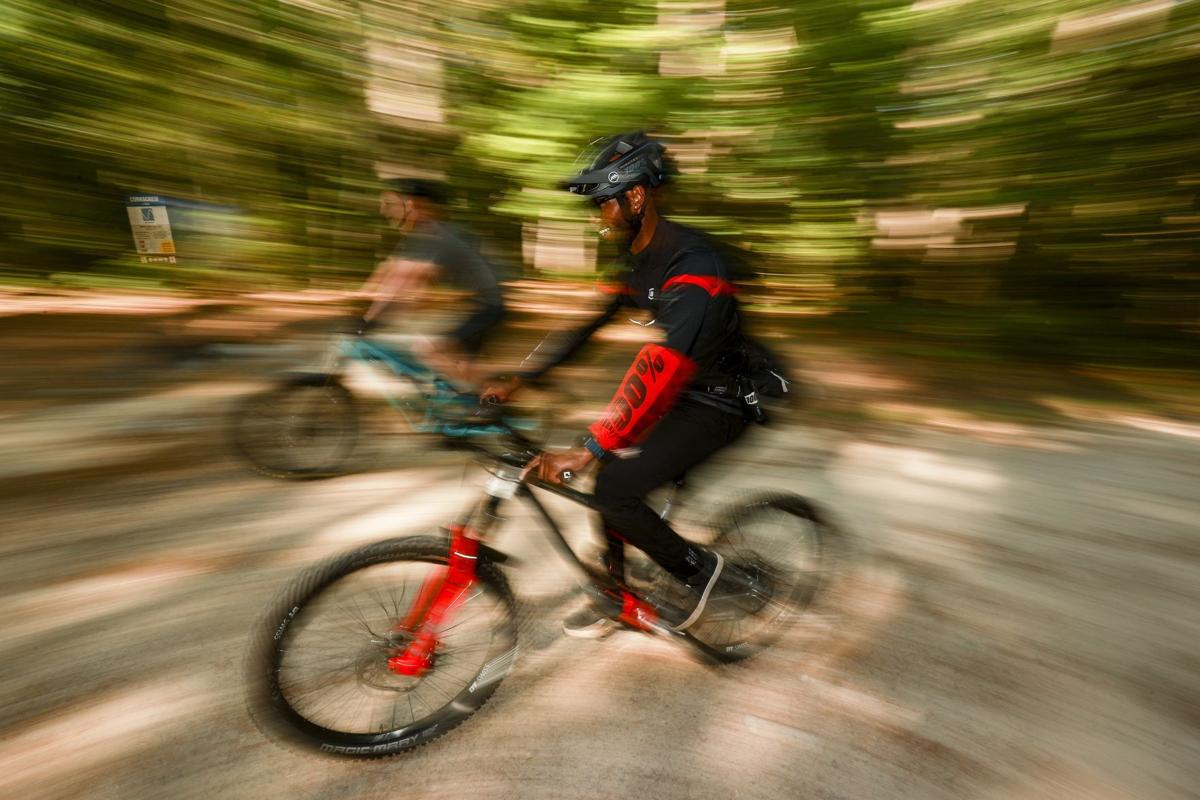 Biker Angelo Washington makes his way through a trail with Steve Scheuermann on Wednesday, May 12, 2021 at Pocahontas State Park in Chesterfield, Virginia. 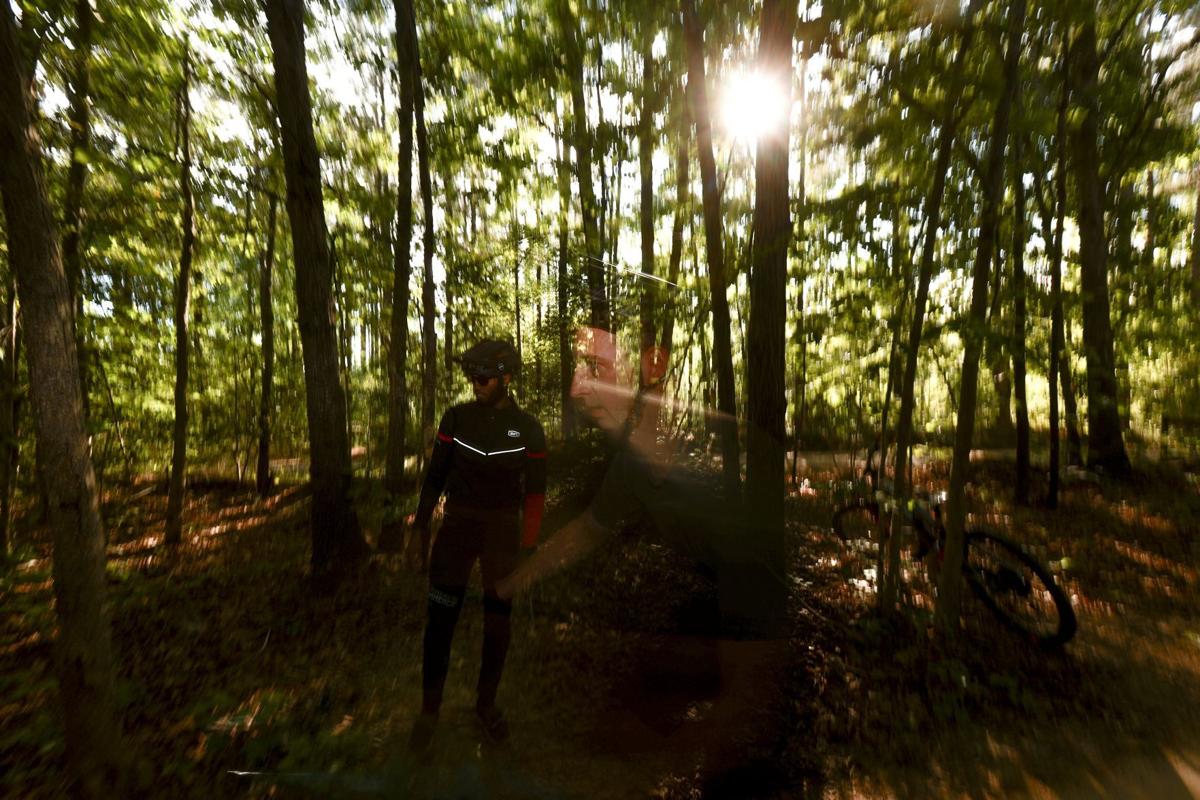 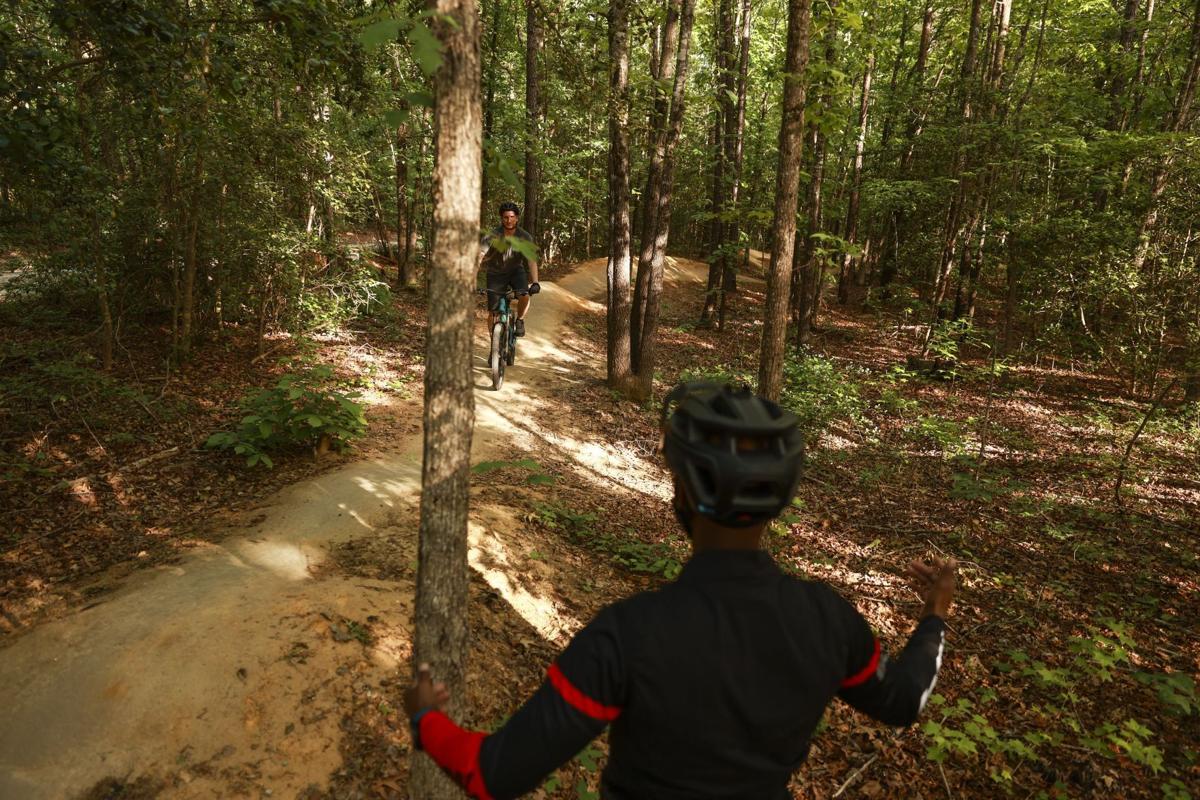 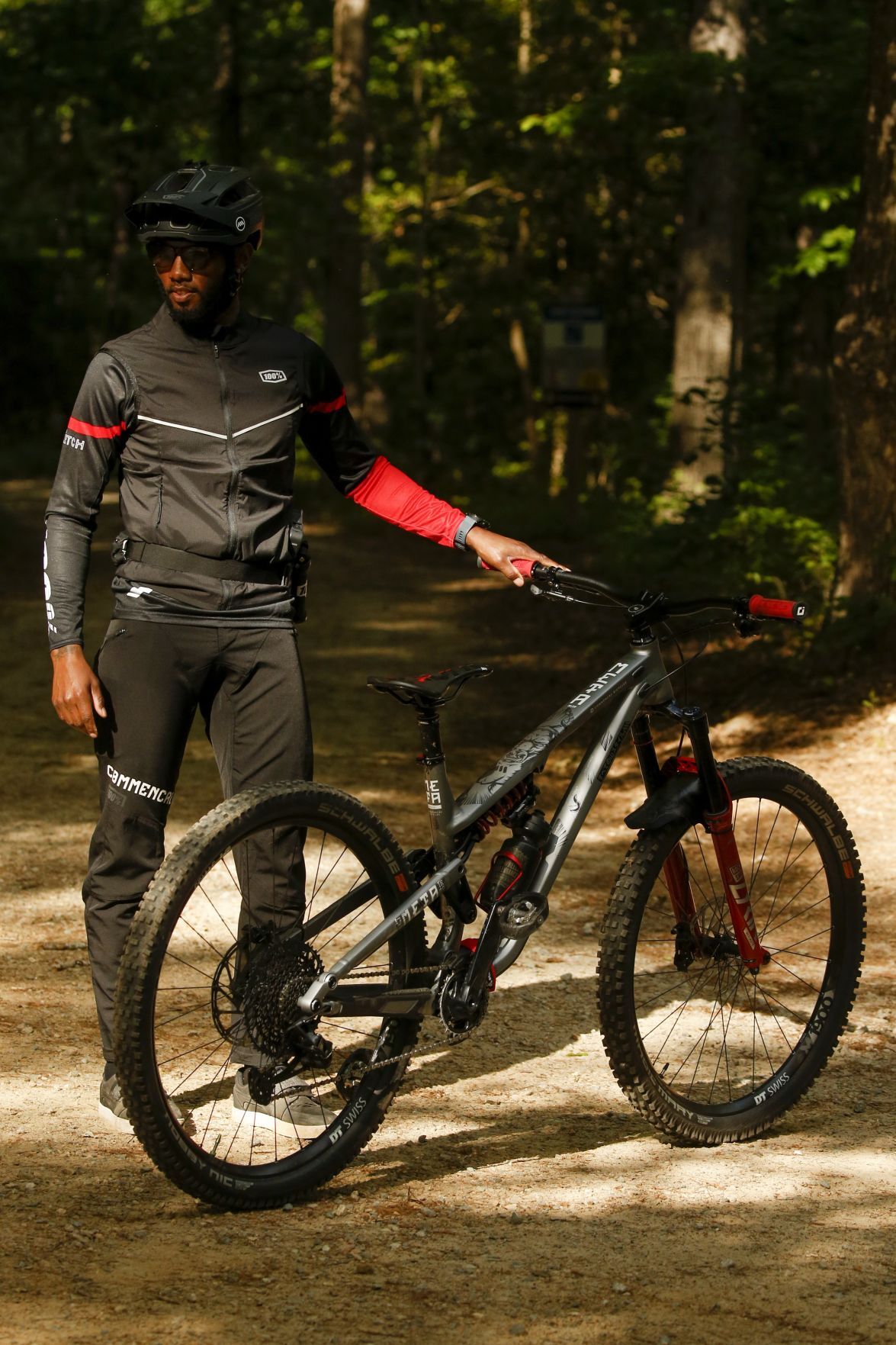 Washington, 34, has shared biking with two daughters and plans to share it with his 3-week-old daughter later.

For Angelo Washington, a lunchtime bike ride several years ago rolled him right through the gates of a new world.

It was 2015, and a co-worker at the firm where Washington works as a lead architectural designer let him borrow his bike one day during lunch to take a ride in nearby Powhite Park.

Washington explored trails he previously didn’t know existed. Being in the woods, riding, was something he found peaceful.

He had been a baseball lifer, playing for a time at Virginia State University and continuing on competitive adult teams in Virginia. But a series of injuries precipitated a close to that career.

Biking, though, was another athletic pursuit. He was hooked quickly.

About two weeks after Washington’s trial on his co-worker’s bike, he found one of his own on Craigslist. And the world that was opened through the lunch-break jaunt in 2015 is one he’s become immersed in.

He rode his very first mountain bike race in town at Dominion Energy Riverrock after he got his own bike, and he currently races competitively at the highest amateur level. He’s won at the national level. And he now coaches mountain biking, too.

This weekend, the 34-year-old will be back at Riverrock, as the annual Richmond outdoor sports and music festival makes its in-person return, Friday through Sunday.

Washington will be helping to lead group bike rides each of the three days.

“I really developed a passion for being able to coach people how to properly mountain bike,” Washington said.

Biking began to take baseball’s place for Washington in 2015. He had played baseball — second baseman and shortstop — for two years at VSU and later for teams in the National Adult Baseball Association and the Virginia Commonwealth Baseball League. But following shoulder, quad and facial injuries, it just wasn’t the same for him anymore.

A couple of months after nabbing a starter ride off Craigslist, Washington bought a more modern bike. And he journeyed deeper into biking.

Coming from a team game like baseball, Washington was driven by the individualistic nature of biking, that it was all on him.

“Like, ‘Hey, all right, whatever I put into this sport I’m going to get out of this sport,’” he said.

The downhill mountain biking discipline in particular was a hook. It was something he was introduced to for the first time at Massanutten Resort in 2016.

“It was a handful, it was a lot,” Washington said of his first downhill mountain biking race. “Like I crashed. It was a lot. But it was a great experience. And from then on it was like, ‘All right, I’m racing downhill.’”

He dived into racing and progressed. He compared it to how he approached baseball. On the diamond, he was focused, no lollygagging. That’s how he takes racing now, too.

In 2017, Washington won a national race in his category at Snowshoe Mountain. His primary racing circuit is one called Downhill Southeast, which competes at such places as Snowshoe, Massanutten, Windrock in Tennessee and Sugar Mountain in North Carolina. He has multiple top-three finishes under his belt, and has sponsorship backing from multiple biking companies, including Commencal.

Biking is something he’s shared with two daughters and something he plans to share with his 3-week-old daughter in the future. And he recently became certified to be a mountain bike instructor, to teach others.

He’s “one of the top riders in the Richmond area,” said Richard Bailey, who’s ridden with Washington for several years and is the manager of the Trek Bicycles location in Stafford. “And just the fact that he’s at the point now where he can pass on the knowledge that he’s gained over the years to other people just kind of speaks a lot.

“Angelo’s definitely like a go-getter. He kind of sets his mind on something and then he just does it.”

That’ll lead him to Riverrock this weekend, which is back in fuller form after it was forced into a virtual format last year due to COVID-19.

He’ll be part of a group ride with pro mountain biker Jeff Lenosky on Friday morning that will start by Historic Tredegar and end with a meet-up with children from Blue Sky Fund at the Belle Isle skills park. Blue Sky Fund is a Richmond-based nonprofit that fosters outdoor education experiences.

On Saturday afternoon, Washington will be part of a group ride in Pocahontas State Park. On Sunday, Washington and Lenosky will participate in a youth-focused event at the Gillies Creek Park BMX track.

Riverrock this year will expand its footprint beyond its typical anchor around Brown’s Island and Historic Tredegar, a way to space out events in the midst of the pandemic that will double as an opportunity to utilize more of the city’s outdoor spaces, like Forest Hill Park, Rocketts Landing and Gillies Creek Park.

All of this year’s running and biking events will take place at Forest Hill Park, with running events capped at 500 participants. And instead of live music concentrated on a stage on Brown’s Island, there will be pop-up concerts around the James River Park System.

A new addition this year, an alternative way to explore, is the #RockTheOutdoors Scavenger Hunt that will be open through May 23.

Pete Woody, PR and communications manager at Sports Backers — which hosts the event with Venture Richmond — has sensed an excitement for Riverrock’s return.

He said the guiding focus this year was, ‘How can we celebrate Riverrock and celebrate the outdoors with the guidelines that are currently in place?’”

For Washington, Riverrock will be an opportunity to share a sport that’s gripped him since that lunchtime ride six years ago. And it’s a slice of peace.

McElroy: On Father's Day, a chance to celebrate the connections we make through sports

Still to this day, I vividly remember attending my first Phillies game with my Dad almost 40 years ago, the first time he took me to buy a glove for Little League, and the first time he warned me to never ever go into the 700 Level at Veterans Stadium during a Dallas-Eagles game.

A visually impaired runner, VCU graduate and Richmond resident, Craig is set to race at the 2020 U.S. Paralympic Team Trials.

Biker Angelo Washington traversed a trail at Pocahontas State Park in Chesterfield County on Wednesday. He will be taking part in a variety of events at the Riverrock festival this weekend.

Biker Angelo Washington makes his way through a trail with Steve Scheuermann on Wednesday, May 12, 2021 at Pocahontas State Park in Chesterfield, Virginia.

Washington, 34, has shared biking with two daughters and plans to share it with his 3-week-old daughter later.