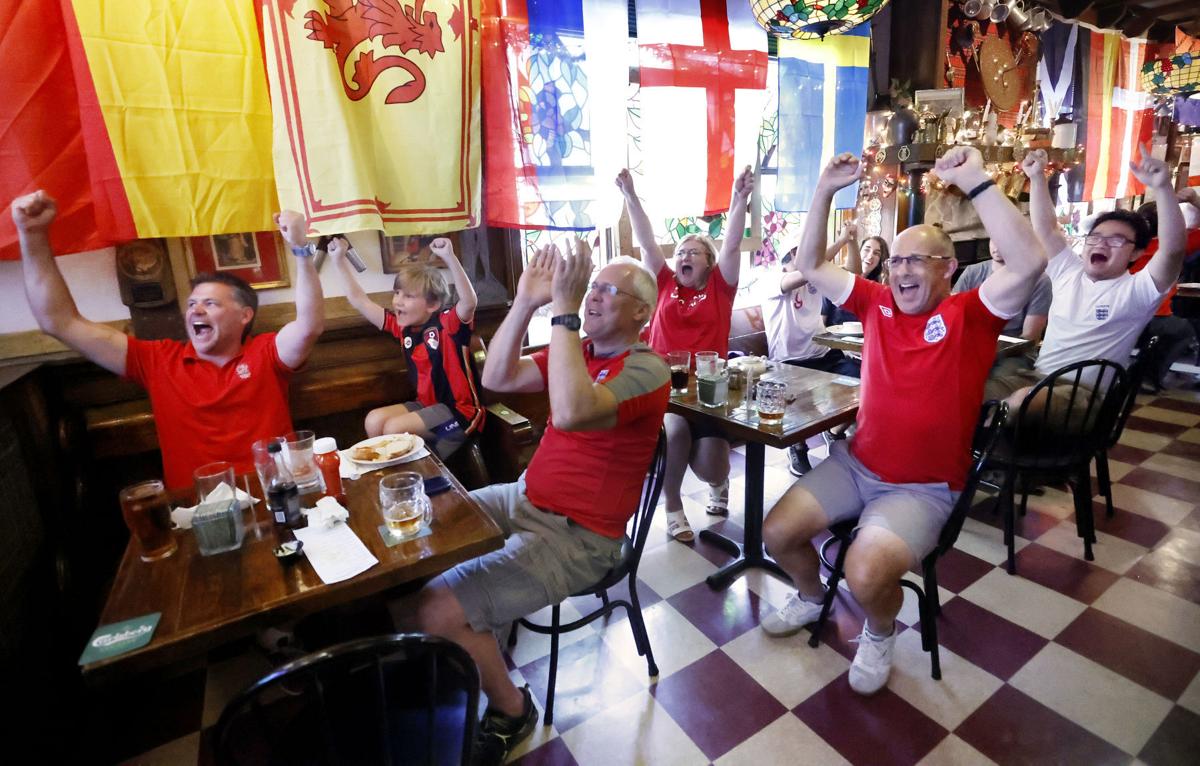 (Left to right) Cal Hiscock, his 8-year-old son George Hiscock, Ted Coryell, Andy and Kristin Clarke celebrate England’s first goal in the team’s win over Denmark in the Euro semifinals Wednesday. They were watching the game on TV at Penny Lane Pub. 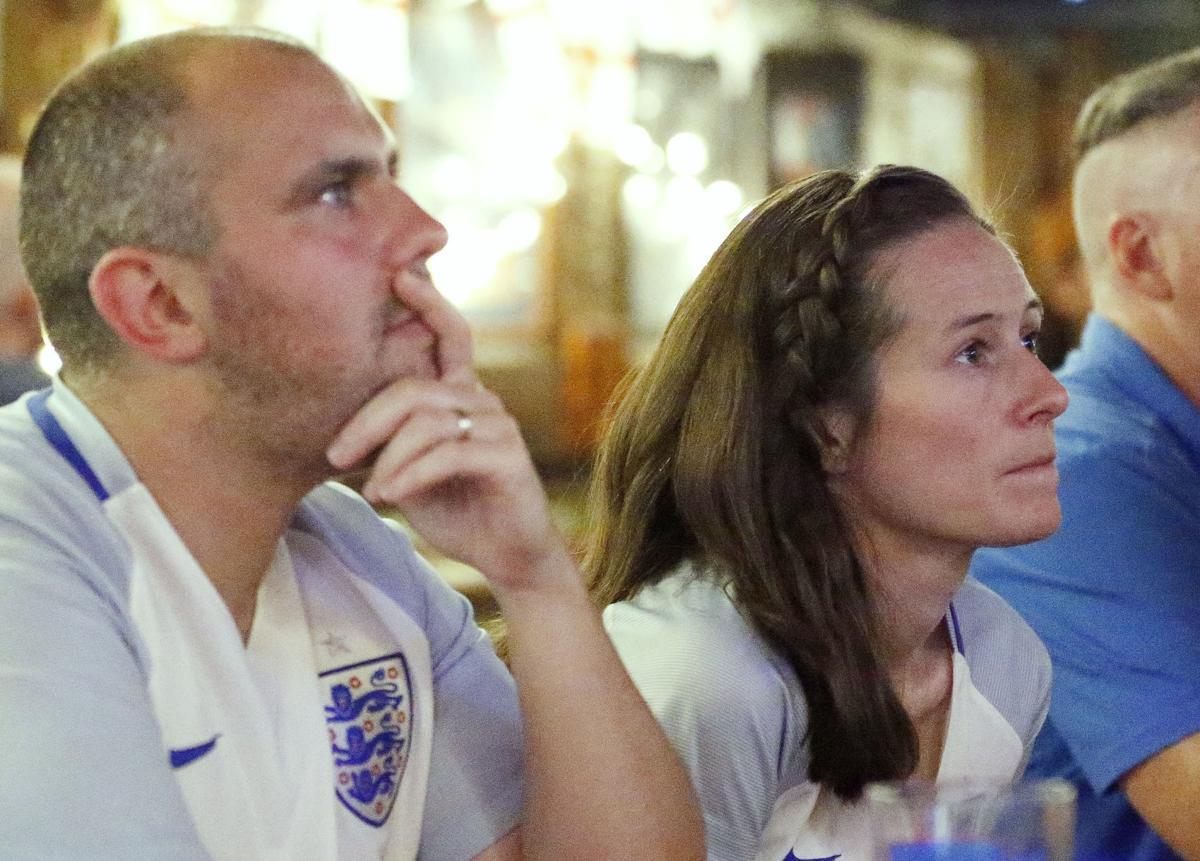 Kristin Clarke holds a British flag as she and her husband Andy Clarke watch England’s victory over Denmark on TV at Penny Lane Pub on Wednesday during the Euro semifinals. 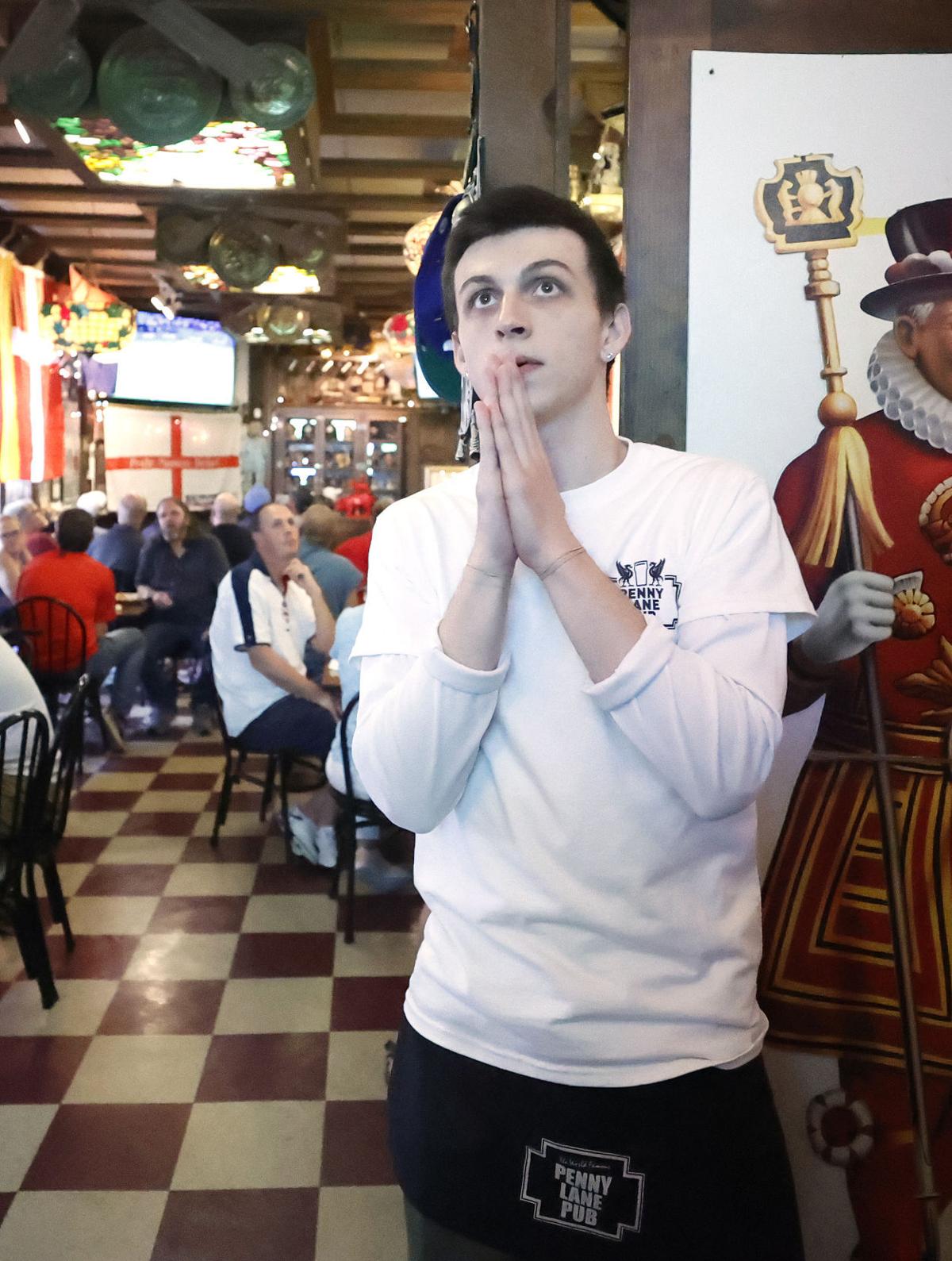 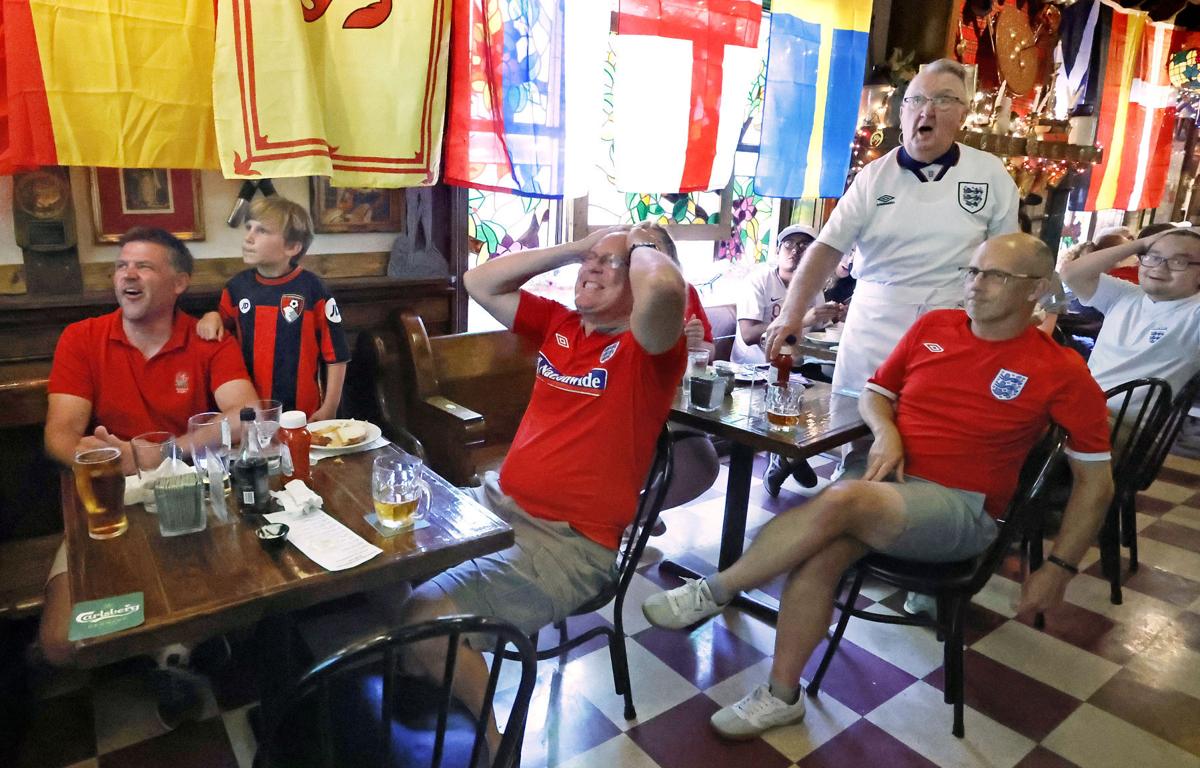 More than 3,700 miles from England’s semifinal European Championship game at Wembley Stadium, Terence O’Neill was changing his shirt. The blue England jersey that the Penny Lane Pub general manager had on wasn’t doing the trick — his team was trailing 1-0 after Denmark opened the scoring with a 30th-minute free kick.

Terence walked by his father and owner, Terry, frequently as the two carried plates of food and beer refills back and forth from the kitchen. Occasionally, they paused to watch snippets of the game from their downtown Richmond bar. The younger O’Neill disappeared briefly, and moments after he returned wearing a red England shirt, his team had scored and the packed pub erupted.

“You think it was the shirt change?” Terence said with a laugh as fans in the 5th Street and Franklin Street pub high-fived and hugged.

He’s not the only one who’s superstitious, either. A handful of regulars lined up at 2 p.m., an hour before kickoff, to make sure they got the same seats they always sit in. One even left the downstairs bar to go upstairs after England went down a goal, Terence said. But superstitions aside, the pub has become a mainstay for many soccer fans. It feels just like the ones in England, many added.

“It’s a taste of home,” said Andy Clarke, who’s English. “These are the real people… this is how football is supposed to be enjoyed.”

After a year of COVID-19 restrictions, the pub’s return to its previously bustling state coincided with this year’s Euro’s tournament. Fans who came 20 minutes into Wednesday’s semifinal listened to Terry tell them there was only standing room remaining — all the tables had been filled long before.

Shouts of frustration were sandwiched between shouts of ecstasy and joy as England booked its spot in its first major tournament final since the 1966 World Cup.

“We can watch a match anywhere, [but] we come here because it’s a brilliant place,” Bryan Doane said. “It’s like a home away from home, and this is where we all get together and can just be ourselves and be a family.”

As the opening whistle blew, a server exclaimed “it’s coming home” as he passed a group of fans decked out in England gear. And by the end of extra time and England’s 2-1 victory over Denmark, the filled pub was singing along to the famous theme song, “It’s coming home.”

Many were happy to be back in a familiar atmosphere, one they’ve grown accustomed to on game days for as many as 15 years. Penny Lane is primarily a Liverpool pub, but no one discriminates. Fans of Chelsea, Tottenham, Manchester United and other clubs come to the pub during the Premier League season.

And when England is playing, they’re all united.

“You can’t really beat the atmosphere,” said Nick Broccoli, who’s American, and came with his English brother-in-law, Sonny Haynie. Broccoli said he knew Haynie would love the bar when his brother-in-law arrived in the U.S. six years ago, and the two have been coming since.

Wednesday afternoon, across the ocean from the game in London, tensions were high in the downtown Richmond bar. One fan shouted “bloody hell” as Raheem Sterling missed a golden chance moments before he forced an own-goal in the first half to tie the game at 1-1. Others shouted “come on” and “shoot the bloody ball” as England missed numerous chances in the second half. They continued to get antsy, and it escalated until the referee pointed to the penalty spot when Sterling got tripped in the box.

Disbelief from Harry Kane’s miss in extra time turned into instant euphoria when the captain slotted home the rebound, but the tension and scrutiny didn’t disappear until the final whistle was blown.

“The fact that England hasn’t won in so long, everyone’s behind them and getting nostalgic,” Terence said before the game. “They’ve been playing exceptionally well and we all just hope and pray they make it all the way.”

Recently, the pub has been busier on weekends, and of course, during England games. They’ve been adjusting their hours based on the game schedules for the past month. The 3 p.m. games are perfect for business, Terence added.

But the bottom line is that having customers back in the pub is a return to normality after a year of COVID-19, and a return to the sense of community that makes Penny Lane uncommon. “It’s a great rebound for them because they get to reopen at full capacity,” Julie DoBias said.

Joe Cashin, who was bartending during Wednesday’s game, added that the fans “missed each other’s company as well, ‘cause they’re all best buddies.” Penny Lane isn’t the most ideal bar for TVs, he said, but it’s more about the community.

Fans supporting other European countries have been watching games too, Terence said, including groups of German, Welsh and Polish fans. The pub has the flags of all 24 participating countries draped around indoor and outdoor dining areas, and Terence added that there are also plenty of general soccer fans who have been coming into the pub.

Even before England booked their spot in the final, Penny Lane had been getting phone calls from people trying to make reservations for Sunday’s championship game. There aren’t many places in Richmond to watch soccer in this kind of atmosphere, said Matthew Jerigan who was at the pub Wednesday, and none are like Penny Lane during an England game.

“I’m definitely expecting a big crowd and a lot of singing and a lot of cheering,” Terence said when asked what’d happen if England reached the final.

“Sunday should be crazy.”

(Left to right) Cal Hiscock, his 8-year-old son George Hiscock, Ted Coryell, Andy and Kristin Clarke celebrate England’s first goal in the team’s win over Denmark in the Euro semifinals Wednesday. They were watching the game on TV at Penny Lane Pub.

Kristin Clarke holds a British flag as she and her husband Andy Clarke watch England’s victory over Denmark on TV at Penny Lane Pub on Wednesday during the Euro semifinals.