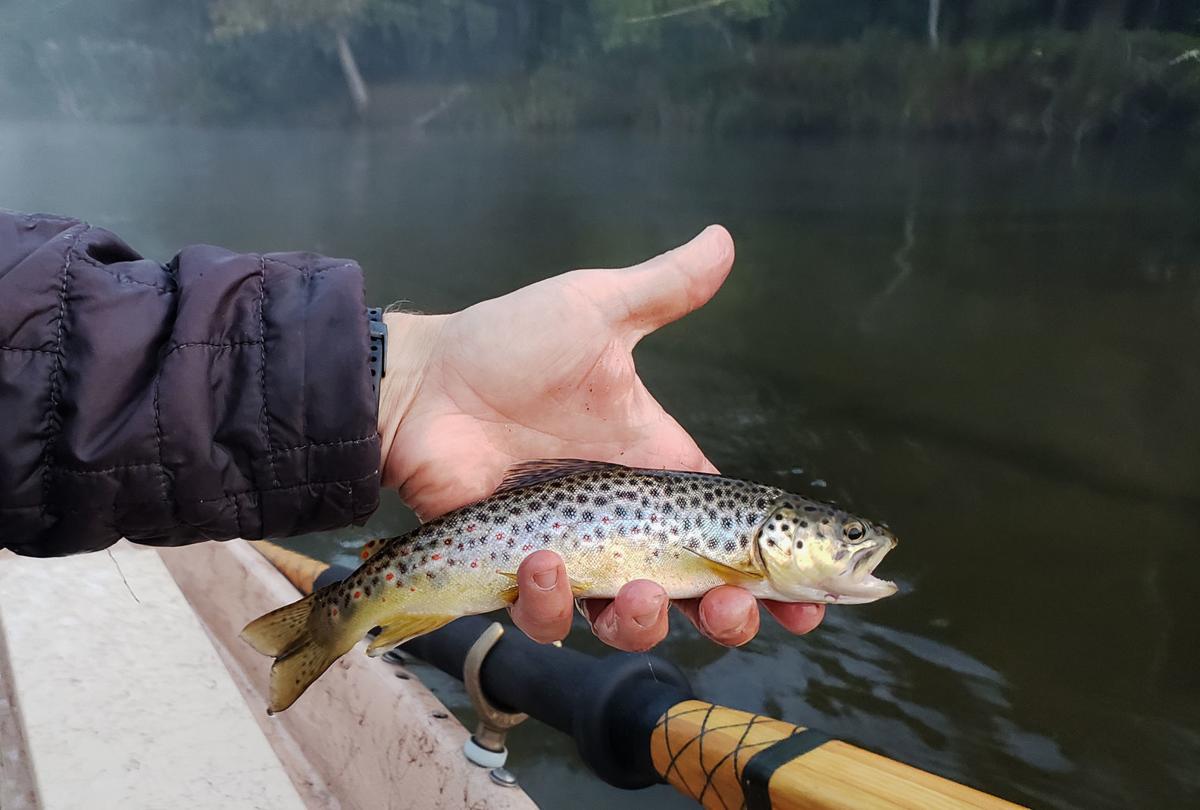 A native brown trout can be found throughout the Manistee River in Michigan’s Upper Penisula. 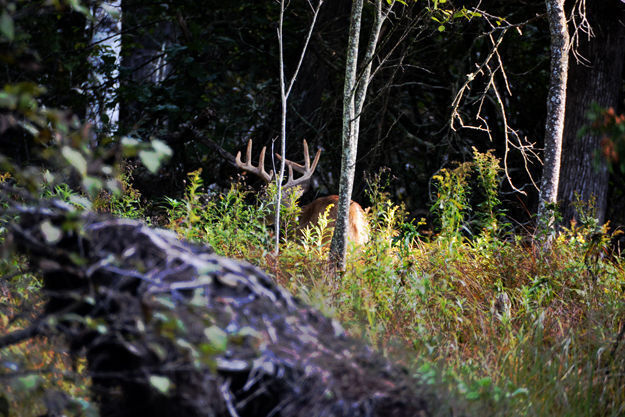 By KEN PERROTTE The Free Lance-Star

Daybreak fog over northern Michigan’s Manistee River was thick as Tim Riley quietly dipped his oars to maneuver our drift boat closer to the outside edge of an oxbow.

Riley quickly schooled me in the nuances of drifting a “Michigan wet skunk,” a brook trout favorite and likely the first fly pattern to incorporate slender rubber legs. I later learned it is considered a good fly for novices. Despite my much-heralded feat of catching four pink salmon on flies while wading in the Upper Peninsula’s Carp River last year, I am a pitiful fly-fishing novice — trust me on that.

“When the fly hits the water, you want to pulse those legs. Strip, strip, strip,” Riley said, demonstrating the technique of pulling line quickly to make the fly look like it’s fleeing a predator.

“With this fly, I want you to stop just before you pick it up. Wait a couple seconds. Sometimes they will hit it just as you’re picking it up,” he added. “Now. Cast over there and try to get as close as you can to that log laying in the water.”

Understanding orders is one thing. Successfully carrying them out is another.

My tippet usually curled up in a bunch at the end of the cast instead of reaching out toward the target. Riley told me that was because I wasn’t letting my back-cast stretch out before trying to propel the fly forward. With practice, I got better and even began executing some of the “roll casts” I had learned on the Carp River.

Eventually, my line tightened after a cast and a few seconds later a small, beautifully colored brook trout was in the landing net. By then my angling partner, Minnesotan Scott Mackenthun, already had caught a couple of brown trout, slightly larger than my diminutive brookies. Scott was using a “circus peanut,” an articulated streamer.

The quiet river was uncrowded, with a lot of cover to work. Trout Unlimited recently received approval for a program that allowed hinge-cutting certain trees, felling them into the water to create habitat. Fly-fishing for trout along these sometimes narrow rivers isn’t all that unlike fishing for crappie, bluegill or bass. Fish like to lurk in cover, often in tough to access areas. As the saying goes, “If you’re not getting hung up, then you’re not fishing close enough.”

Mackenthun probably hung his flies in the riverside trees and brush more often than I did. He also caught about a dozen fish to my two. Riley was nonplussed about the hang-ups, sometimes encouraging us to simply break off snagged flies.

Mackenthun started the morning in the front of the boat, giving him first crack at all those choice targets. We switched positions mid-morning, and he still caught several fish to my one.

There is something incredibly relaxing about this style of fishing. It requires concentration and technique, constant connection to the water and the way it is behaving. Other than the sound of the oars dipping in the water and the gentle whoosh of fly line cutting through the air, the quietude is inspiring. (It does help, though, when the silence is interrupted by the splashing of a trout coming to the net.)

Our Sept. 13 trip on the beautiful Upper Manistee was brief. We had a writers conference in Gaylord, an ideal hub for a wealth of northern Michigan outdoor activities, kicking off at noon. After a couple of miles of navigating riffles and gently flowing water, Riley nudged the boat against the bank landing near the CCC Bridge State Forest Campground.

The Manistee, and several other Michigan rivers, saw lots of activity during the days of Franklin Roosevelt’s Civilian Conservation Corps. Young men enrolled in the program worked improvement projects on hundreds of miles of Michigan game-fish streams. Crews built log structures called deflectors to maintain pools for trout. The bases of many revetment shoreline stabilization structures, built from rot-resistant cedar during that era of intense logging, remain some 90 years later.

A drift down a secluded river, bordered by spacious state game management lands, can yield surprises. As we rounded one bend, Riley pointed out a mature whitetail buck, feeding leisurely about 50 yards from the riverbank.

“I’ve seen him before. Earlier this year, he was hanging out with another nice buck,” Riley said.

The deer raised its head, briefly eyeballing us but seemingly unconcerned as we retrieved our cameras. It’s interesting how deer, birds and other animals often aren’t spooked by boats, tractors or other means of work and transport.

Riley sometimes guides trips from classic AuSable riverboats, named for the nearby AuSable River, famed for brown trout. These long, narrow, wooden boats may have been patterned after bateaux used by loggers or after dugout canoes made by the local Indians. For our trip, his Hyde drift boat was a comfortable set up, with locking leg braces at bow and stern. These let you fish standing up, bracing yourself for stability.

We didn’t have time to thoroughly work all the pockets but saw enough to know that this pristine river is certainly worthy of a repeat visit should the opportunity arise.

Riley’s encyclopedic knowledge of the river and the surrounding area makes for lively discussion during the trip. This Renaissance outdoorsman offers half- and full-day fly-fishing trips, as well as guided grouse and woodcock hunting with his beautiful pointers and setters. For more, see rivervalleyadventures.com.

A native brown trout can be found throughout the Manistee River in Michigan’s Upper Penisula.