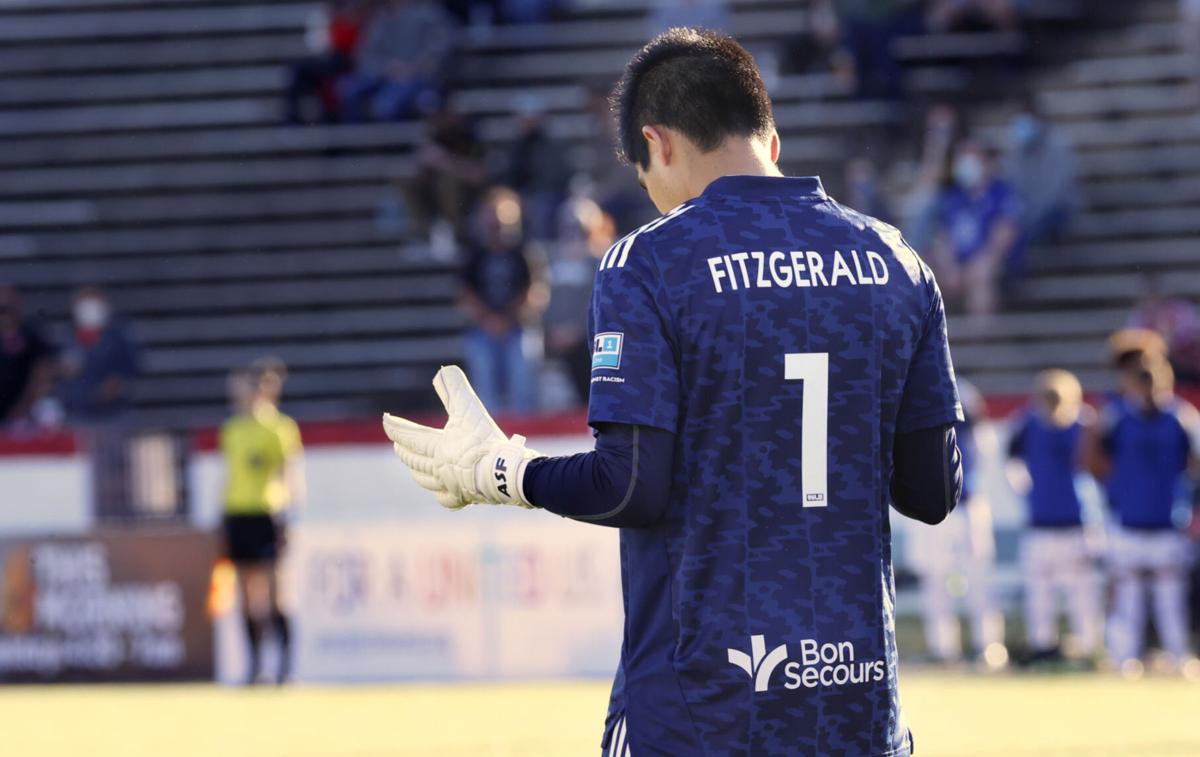 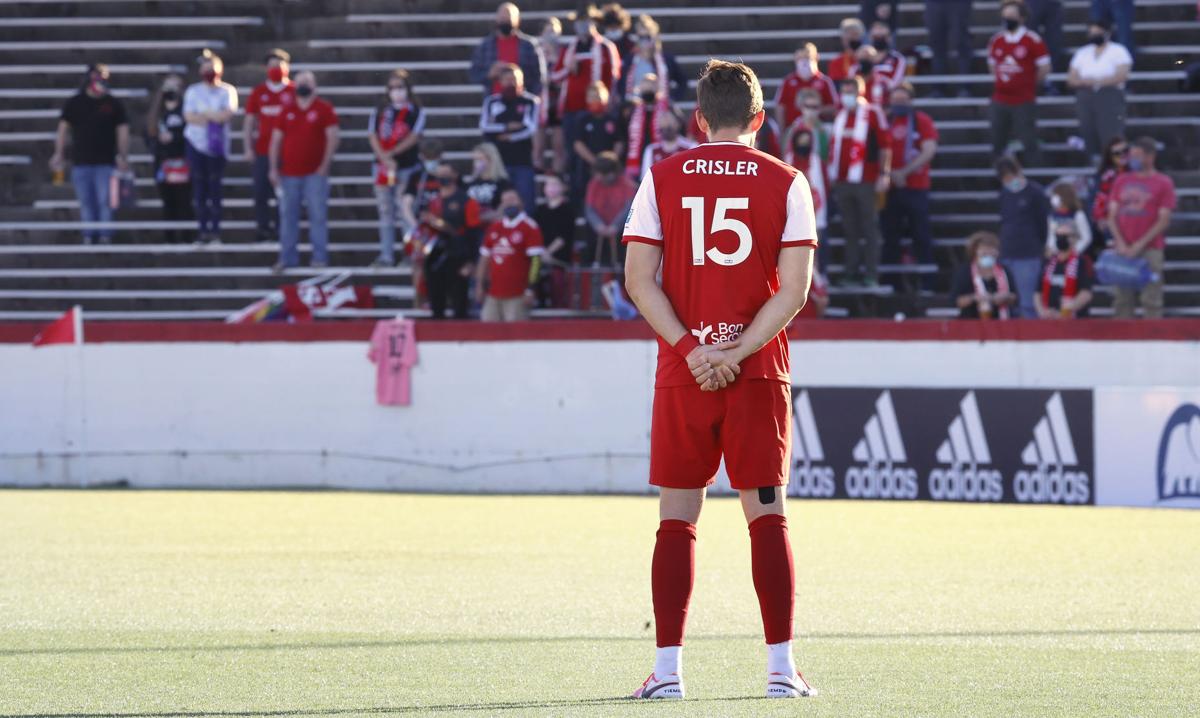 Kickers player Jalen Crisler and team fans remember former Kickers player and coach David Bulow, who died Thursday at age 41, during a moment of silence before Richmond faced South Georgia at City Stadium on Saturday. Richmond won 2-0 behind two goals from Emiliano Terzaghi. Get a report at Richmond.com. 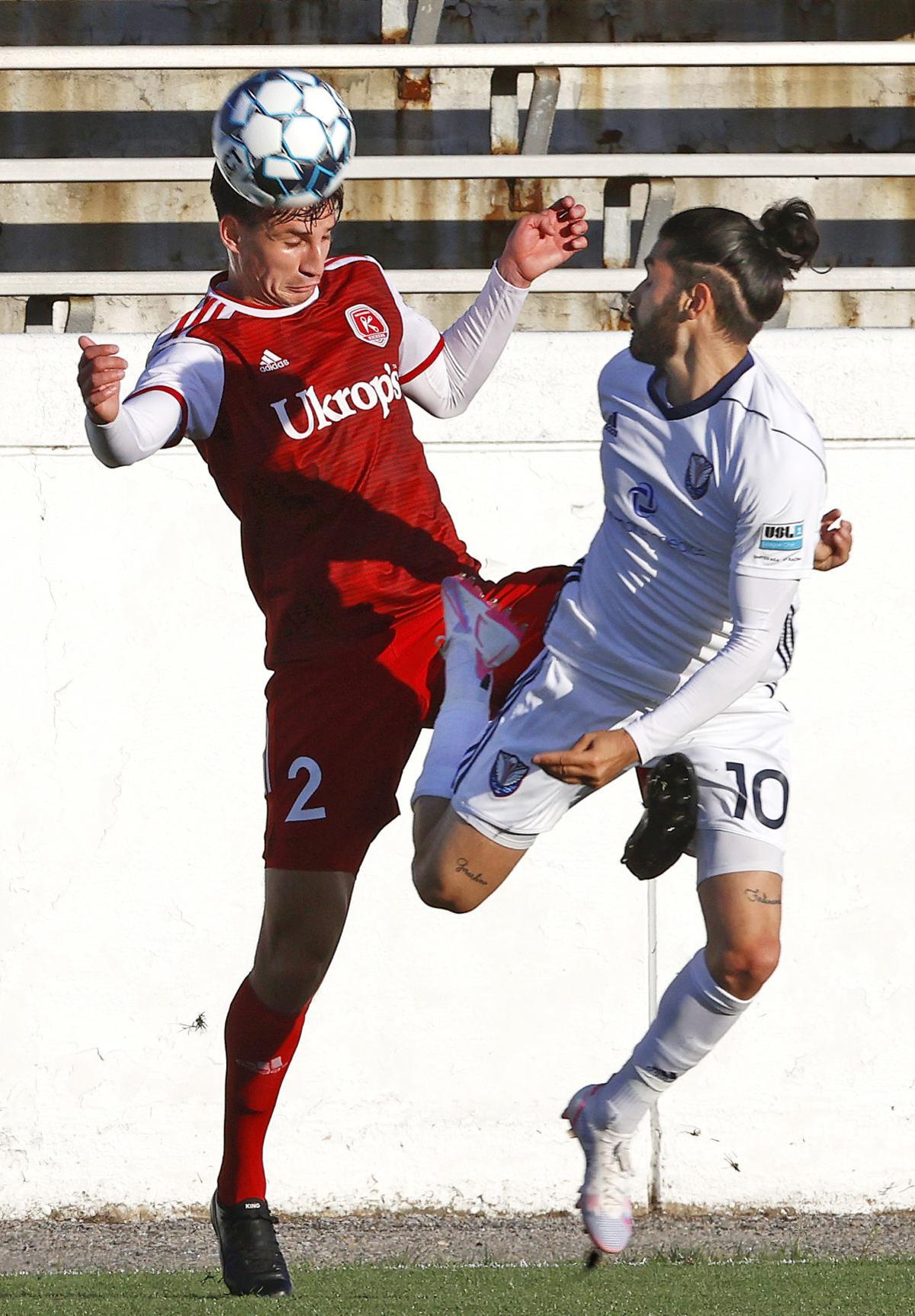 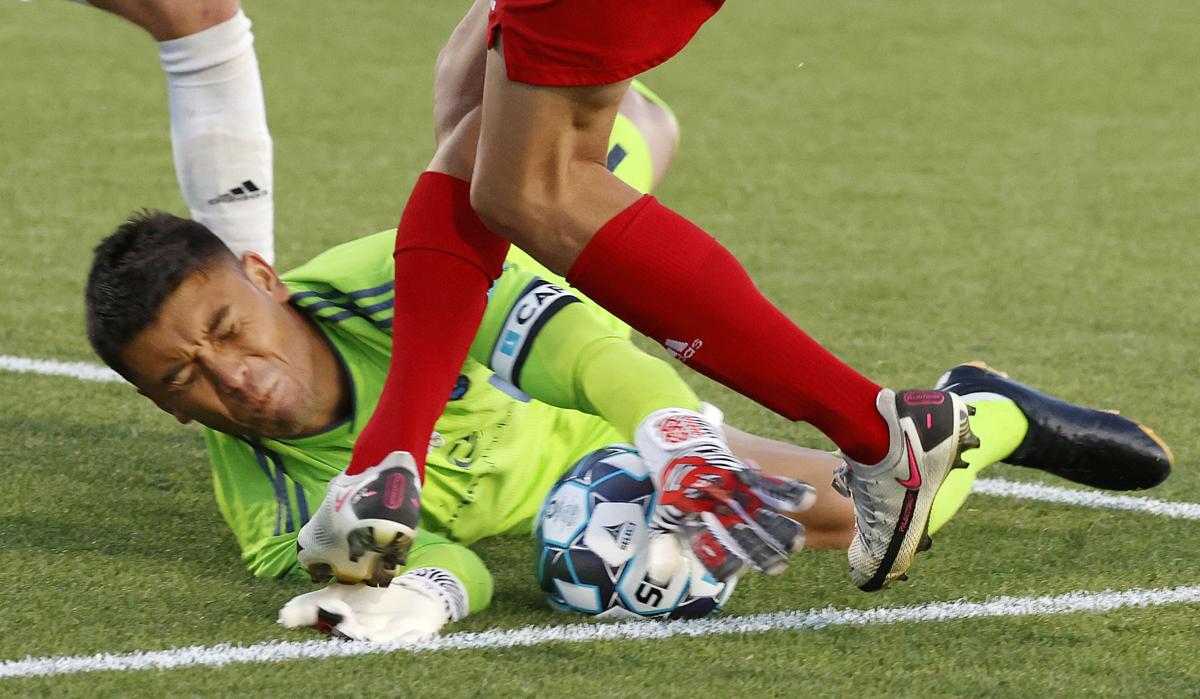 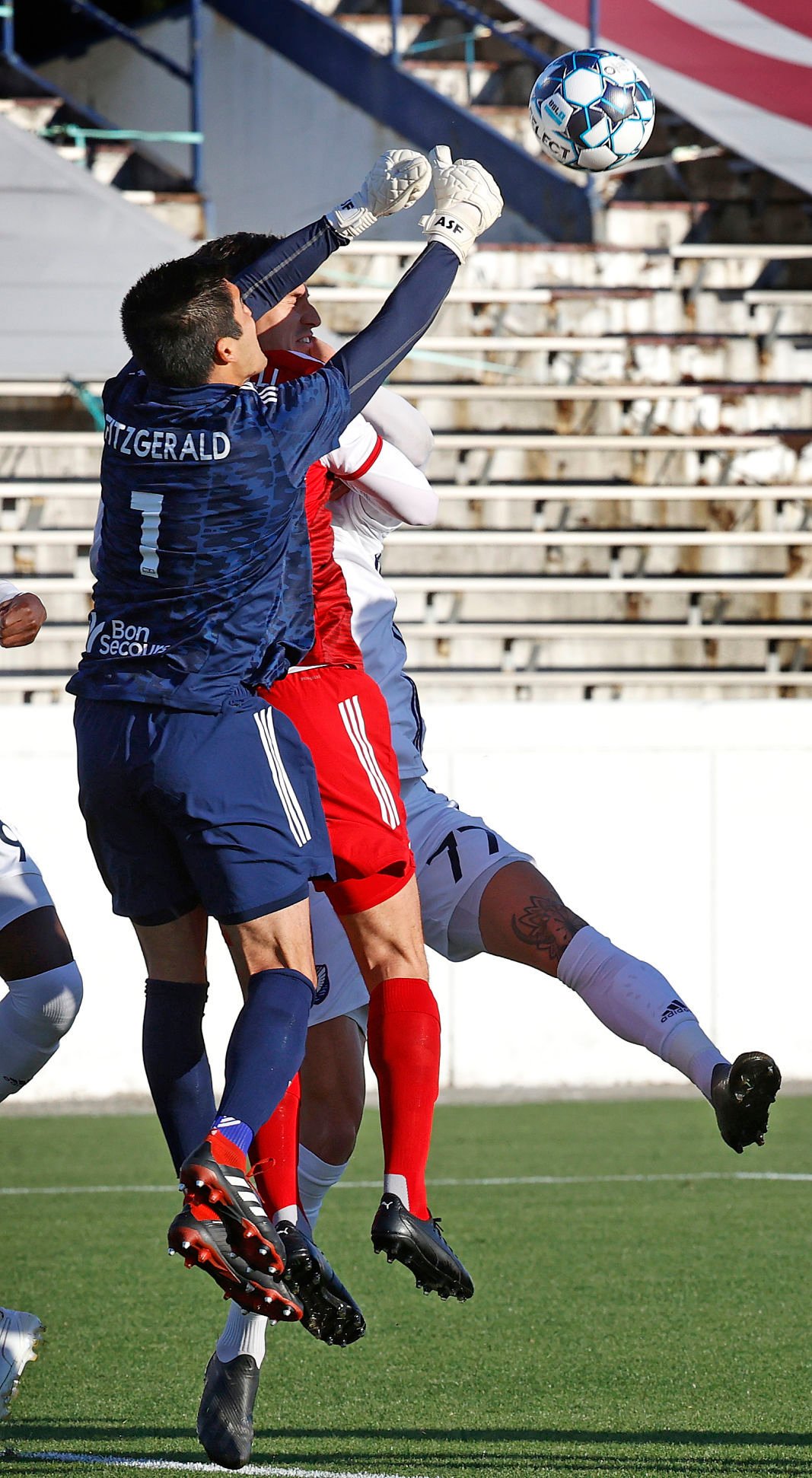 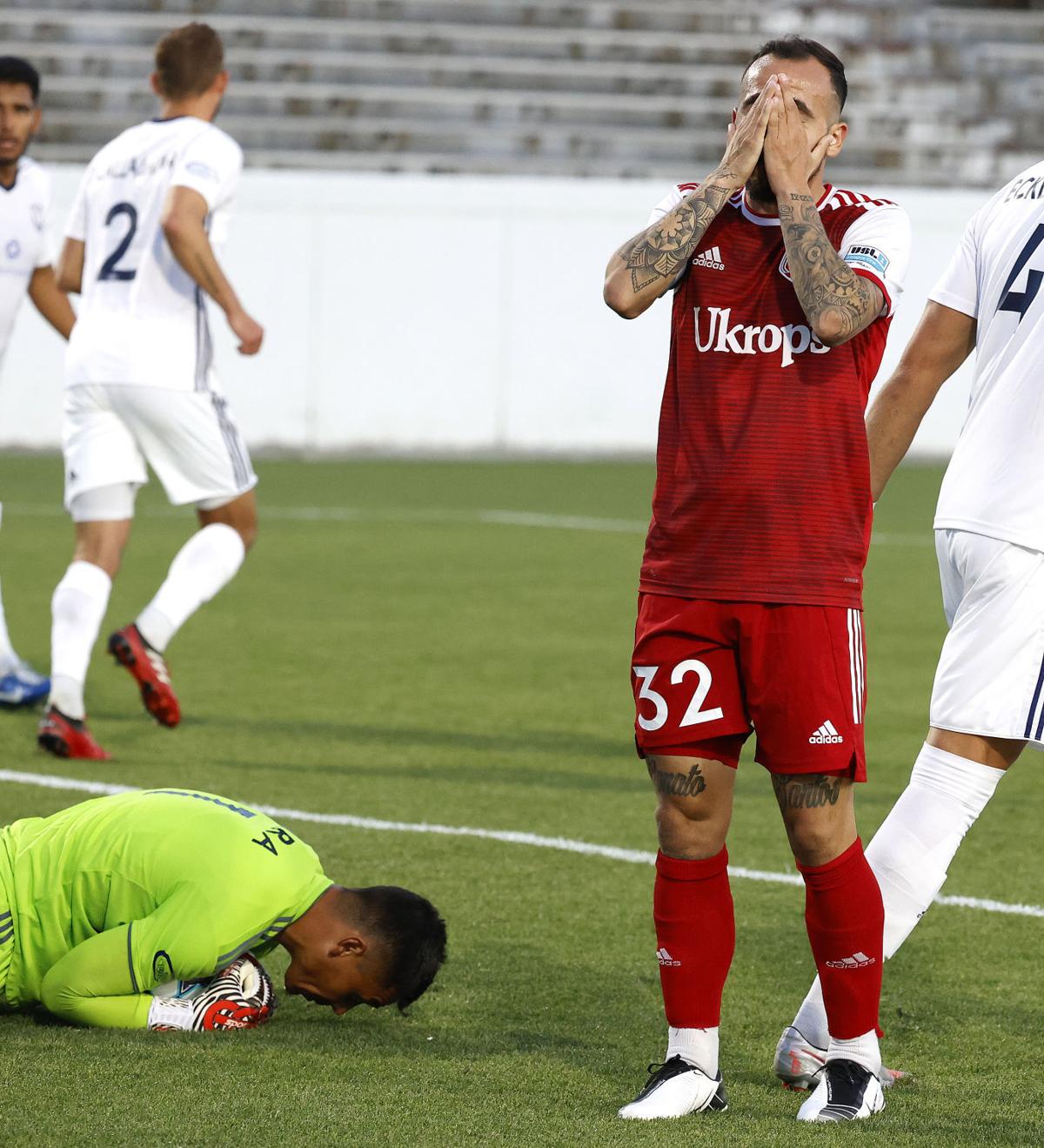 Kickers' Amiliano Terzaghi reacts after South Georgia Tormenta FC goalkeeper Pablo Jara made a save in City Stadium Saturday, May 8, 2021.

A moment of silence was held after the national anthem Saturday at City Stadium so Richmond Kickers supporters could honor a beloved club leader prior to a 2-0 USL League One victory over South Georgia Tormenta FC.

David Bulow, a former Kickers coach and player, died Thursday morning at 41. Bulow suffered a stroke two weeks ago and had been in a coma.

Chenier Durand II — a co-host of Rivercity 93, a podcast focused on all things Kickers — has been coming to games since he moved to Richmond in 2012. He said Bulow held a special place in the Kickers’ community.

“David Bulow was one of our biggest fans. He was so supportive of us,” Durand said, gesturing to the Kickers’ supporters group dubbed the River City Red Army, assembled around him in its traditional Section O.

“He was just an amazing guy. You can’t help but smile when you’re around him. He just gave off this positive energy, this joie de vivre. It feels like things aren’t as bright without him around.”

Durand added that, when Bulow coached the club in 2019, he had a unique connection with the fans in Section O, who chanted Bulow’s name as the match kicked off.

He said being among other steadfast club supporters felt right in a moment of communal mourning.

“It is a world of help, supporting the Kickers has always been a joy for me,” Durand said. “Ever since I moved to Richmond, I dove into the Richmond Kickers culture, and he [Bulow] was always a part of that.”

Unofficially the longest tenured Section O resident, Mike Garbett has had season tickets since 1995. The River City Red Army held its own moment of silence in the 10th minute of the match, and the cheering section all held up their Kickers scarves in unison.

“It was such a pleasure to know him,” Garbett said. “I never heard him say a bad thing about anybody, even when somebody fouled him. Everybody knew Dave, people who didn’t even have connections with soccer knew Dave. He was an amazing person.”

Garbett added that being among a cheering section he likened to “a family” while the group grieved together was a cathartic experience.

A vocal 1,789 fans juggled and passed soccer balls, waved flags, ate and drank on concourse tables and milled about freely in an environment approaching normality, albeit with masks all around.

Winger Oalex Anderson subbed on for midfielder Matt Bolduc in the 74th minute and made an immediate impact. What had been a goalless affair for nearly 75 minutes was broken open when Anderson found space on a breakaway down the right side.

Anderson sprinted to the byline, then cut back a cross into the box, which found the sweet feet of striker Emiliano Terzaghi. The Argentine bodied his defender while controlling the ball, and turned onto his left foot to slot home the finish into the upper left hand corner of the net for his first goal of the season.

Anderson and Terzaghi teamed up again in the 87th minute to put the match out of reach. Anderson drew a penalty with a marauding run, this time down the left side.

Terzaghi, the reigning USL League One MVP, took the penalty. The South Georgia (1-3) keeper saved his low-driven effort to the right side. But the save was called back after the keeper was ruled to have come off his line before the ball was struck, and Terzaghi smashed his second spot kick into the upper left hand corner of the net.

The last time Richmond beat South Georgia in 2019, Bulow was the Kickers’ head coach. Terzaghi said he lost his grandmother this week, so he has been feeling emotions of loss and grief congruent with those of the Kickers’ community.

“Coach Bulow meant a lot to this community. I met him once and the only thing I can remember is he had a great smile,” Terzaghi said through a translator.

“So it was very special to be able to score and give that to the community of Richmond and the fans who loved him so much and will always remember him.”

The Kickers (2-2) will have a maximum capacity of 4,000 fans for their next home match May 22, in accordance with loosening COVID-19 regulations.

Kickers player Jalen Crisler and team fans remember former Kickers player and coach David Bulow, who died Thursday at age 41, during a moment of silence before Richmond faced South Georgia at City Stadium on Saturday. Richmond won 2-0 behind two goals from Emiliano Terzaghi. Get a report at Richmond.com.

Kickers' Amiliano Terzaghi reacts after South Georgia Tormenta FC goalkeeper Pablo Jara made a save in City Stadium Saturday, May 8, 2021.