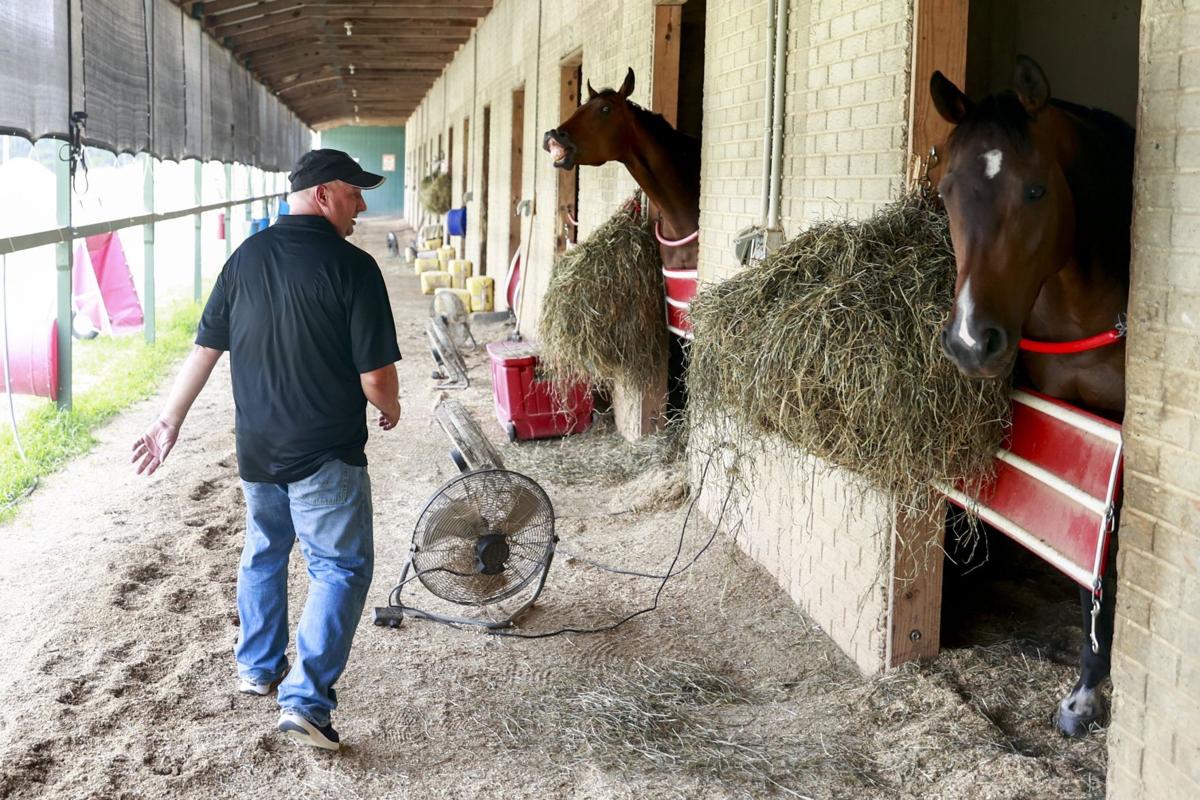 D.W. Fries of Blackout Racing Stables makes his way down the stables to check on Press Snooze on Monday at Colonial Downs. Press Snooze is one of four horses owned by Blackout, which has eight wins in 32 events its horses have raced. 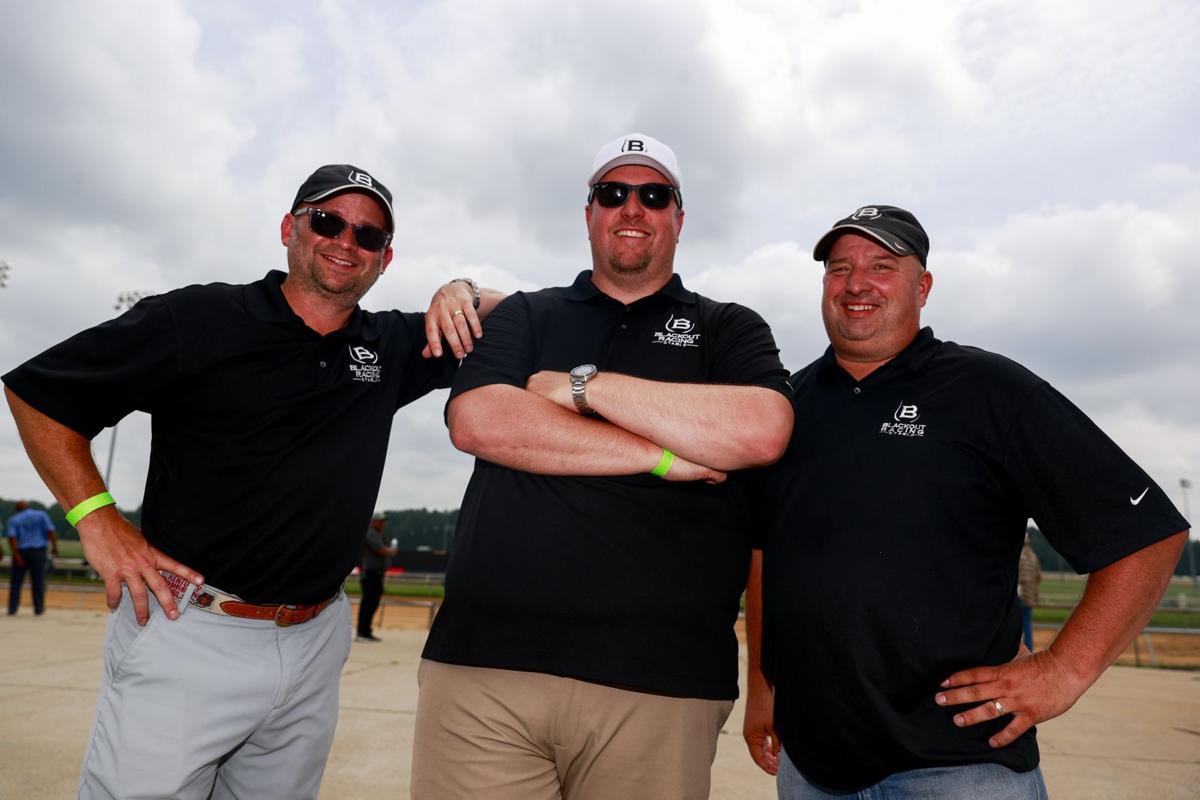 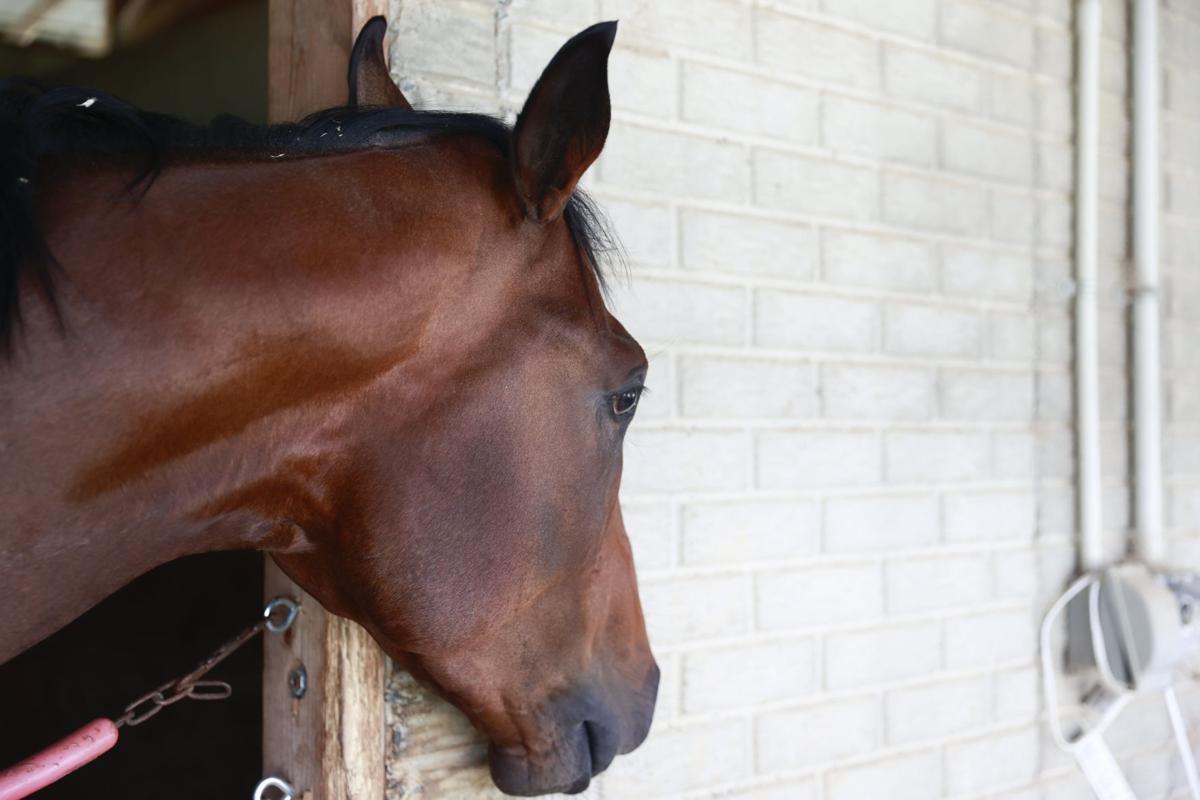 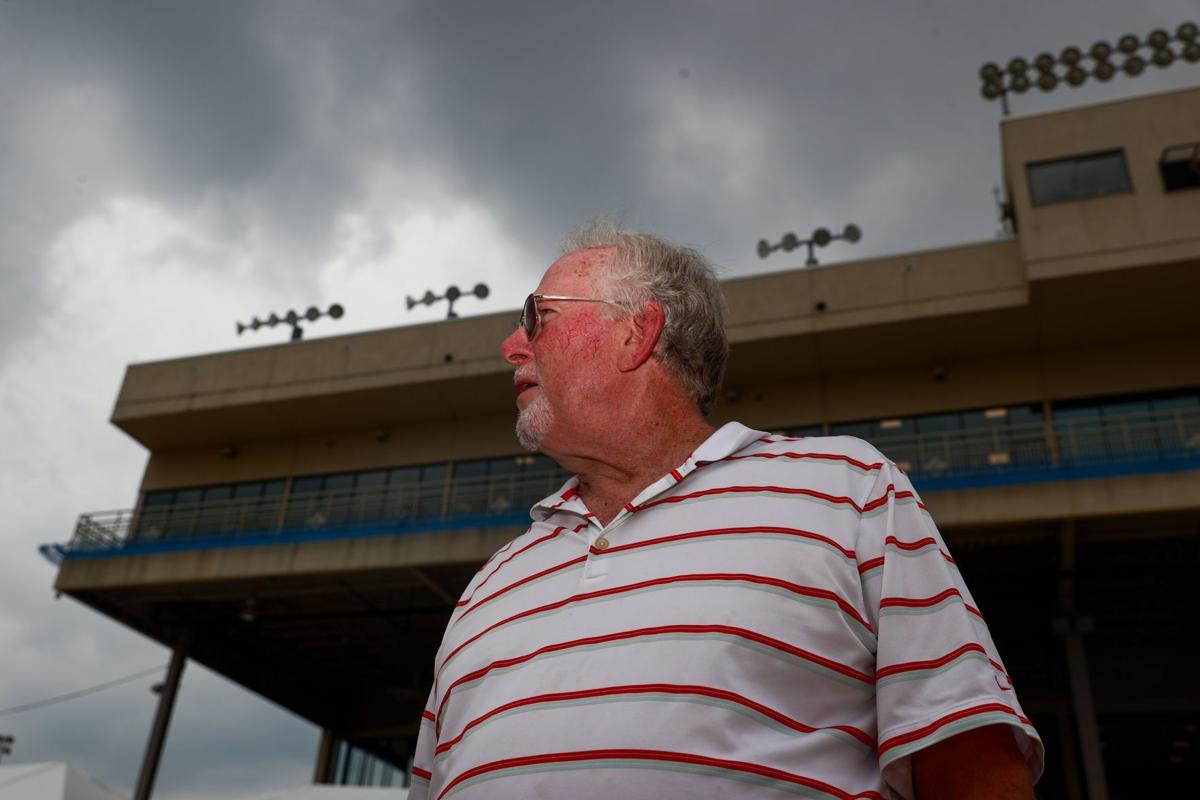 Trainer Mike Tomlinson looks on after his horse won the race on Monday, July 26, 2021 at Colonial Downs Racetrack in New Kent, Virginia. 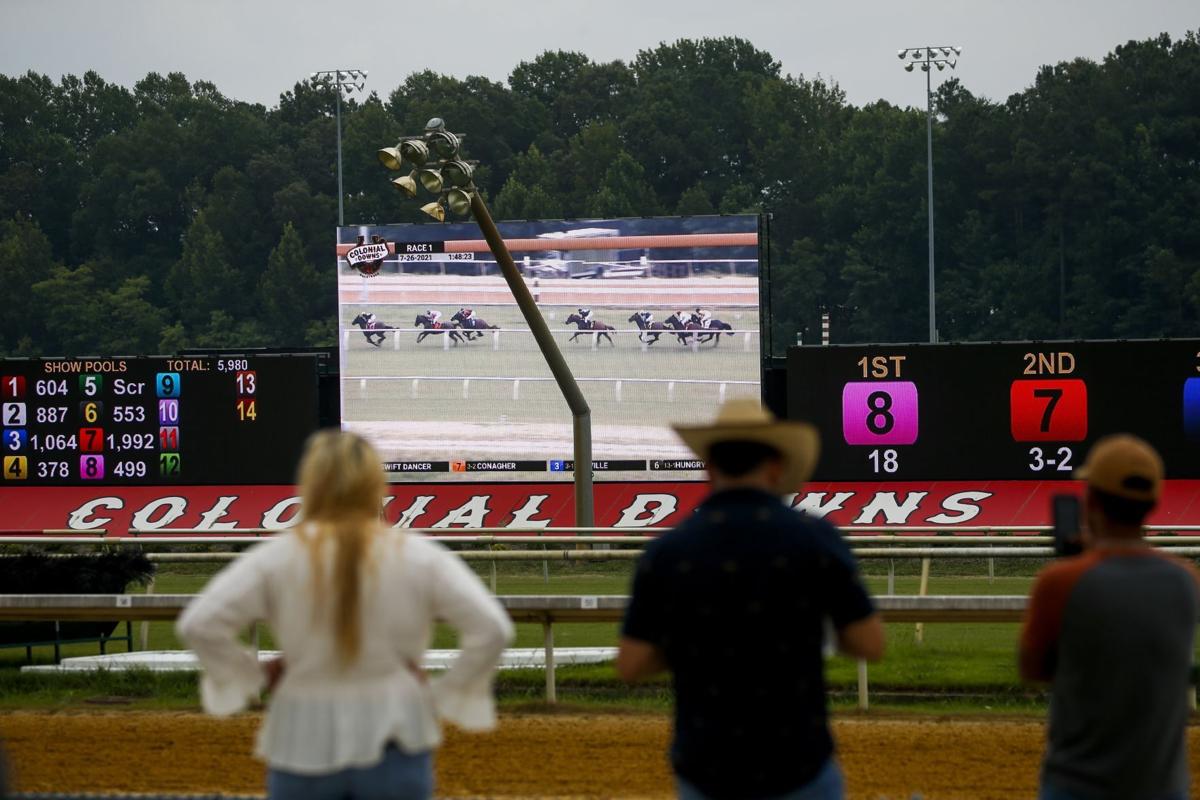 Spectators watch as horses makes their way down the racetrack on Monday at Colonial Downs.

The idea was pitched during a cookout that, fittingly, was centered on the Kentucky Derby.

It was May 2018 and Kyle McGinty, who was part of a Kentucky-based bourbon social club called Blackout Barrel Group, asked D.W. Fries what he and a few others would need to do to get a horse of their own.

The bourbon group had formed about two years earlier — sprung from bourbon lovers who met through Facebook. They began pitching in to buy barrels of bourbon together.

And McGinty, a Louisville native and lifelong horse racing fan, thought of taking that idea of combining efforts — as Blackout did with bourbon — and translating it to horse ownership.

McGinty and Fries, a longtime assistant for Kentucky horse trainer Mike Tomlinson, were already connected through the bourbon group. And McGinty went to Fries for information on how to bring the idea to fruition.

“Just get the money and we’ll figure it out,” Fries told McGinty at the cookout.

Members of the bourbon group pitched in and by June claimed their first horse, named Doc Kane, for $16,000. And Blackout Racing Stable was born.

The unique combination has enjoyed solid success on the track — and all bonded by bourbon.

“I always try to keep reminding [McGinty] how lucky they’ve been,” Fries said. “Because usually horse racing has more downs than ups. But they’ve been lucky to have a lot more ups than downs.”

McGinty said Blackout’s horses have won eight of the 32 races they’ve entered. A newly acquired horse out of the group, named Megacity, was scheduled to run Monday night, and another named Press Snooze will run Tuesday.

There’s a third arm of the Blackout conglomerate, Barrels for a Cause, a nonprofit that raises money for charity through bourbon tastings raffles and more. It has raised more than $600,000 in three years. McGinty, 38, is the president of all three arms.

Each wing overlaps, McGinty said, and Blackout has members from 40 states, approximately 200 people.

The original Blackout Barrel Group started in 2016, connected through a Facebook group. The name sprung from an early barrel tasting McGinty and others attended in November 2016 that fell on the day before Thanksgiving, a popular drinking day sometimes called “Blackout Wednesday.”

“One day we bought our own barrel,” McGinty said. “A bunch of guys wanted to buy it. We just created a group, and here we are. Nobody knew each other. Just leap of faith.”

The barrels can cost in the range of $7,000-$10,000, McGinty said, and the original members pooled their money and bought their first. Six months later, they bought another and it’s continued to grow, with 200 barrels in the group’s possession. They have their own private label of bourbon from it.

People from all walks of life are involved, Fries said, from McGinty, a schoolteacher full time, to a member in Alaska who owns an Italian restaurant. The bourbon brought everyone together.

“Bourbon’s just so huge in Kentucky. People are lining out, camping out, to get a bottle,” McGinty said. “It’s so hard to get, so expensive. … So we kind of just found a way, instead of going through all that hoopla, to just do our own.”

Then the original group splintered into the Blackout Racing Stable and Barrels for a Cause.

The stable is mainly based at Churchill Downs in Louisville, Ky., with the horses under the care of Tomlinson and Fries.

“[McGinty is] extremely easy to work with,” Tomlinson said. “He turns everything over to us, and just leaves us alone and lets us do our job.”

Fries believes Blackout’s patience has been key to the group’s success on the track. Fries and Tomlinson are allowed to take their time to pick out the right horses to acquire rather than simply fill up their stable as quickly as possible.

“We look at horses that are, maybe, improving, rather than going down a ladder,” Fries said.

The racing helps promote the charitable endeavors. Groups that have been supported by funds raised through Barrels for a Cause include the Down Syndrome Association of Greater Cincinnati, Norton Children’s Hospital in Louisville and The LEE Initiative, with its restaurant relief efforts.

“That’s going to be a huge accomplishment when that happens,” he said.

On the horse racing side, McGinty sees Blackout Racing Stables perhaps growing to include 10 horses in the next five years. He was one of five members of the group at Colonial Downs for Monday’s races. A dozen members planned to visit Tuesday.

McGinty never dreamed the group would be where it is now, with four horses running stakes-level races.

The connection bourbon created among Blackout’s members has oozed all over the country, with a stop at Colonial Downs this summer.

“These experiences are what it’s all about right here,” McGinty said.

D.W. Fries of Blackout Racing Stables makes his way down the stables to check on Press Snooze on Monday at Colonial Downs. Press Snooze is one of four horses owned by Blackout, which has eight wins in 32 events its horses have raced.

Trainer Mike Tomlinson looks on after his horse won the race on Monday, July 26, 2021 at Colonial Downs Racetrack in New Kent, Virginia.

Spectators watch as horses makes their way down the racetrack on Monday at Colonial Downs.